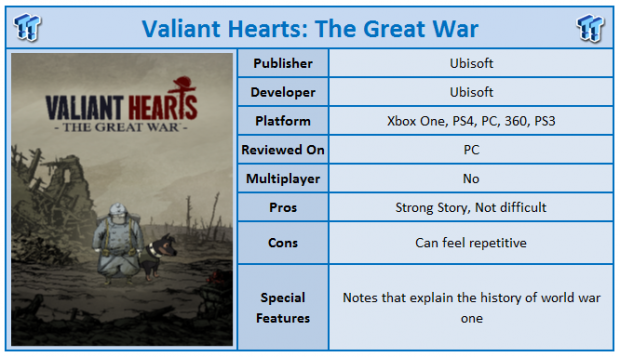 When it comes to video games, one area which has not been explored in a war format is the First World War. One reason could be is that it was a very different war to that of ones which came after it, and despite having a few very memorable campaigns, the Second World War is where people seem to be able to relate the most. So when Ubisoft announced they were making a puzzle adventure game based on the First World War, our ears pricked up. Valiant Hearts is a stunning example of what happens when you pair the right engine with the right idea, and obviously the right development team.

Valiant Hearts opens with the assassination of Archduke Franz Ferdinand, which is what is widely seen as the trigger for the First World War. The game revolves around four characters with widely varying reasons for getting dragged into the war. There is Karl who is a German who is deported out of his current home France and placed into the German army. Emile who is part of the French army, Anna a Belgian nurse and Freddie, a US soldier who volunteered to join the French army during the war. 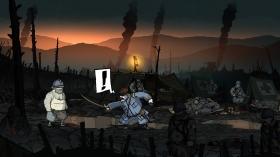 These characters intertwine in such a way that to detail how they fit in with each other would spoil much of what makes this game so interesting to play. It is such an intricate story that may have you with a jaw dropped every so often with how well Ubisoft has put this together. This is also a game that is not afraid to shock you. Utilizing a cartoon style does somewhat lessen the impact of some of the shocking, tragic imagery from the war, but do not be surprised if you feel sick to the stomach or even shed a tear playing this game. It draws you into the story that much. 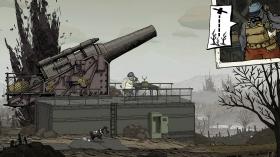 When it comes to the gameplay, Valiant Hearts is a fairly run of the mill adventure/puzzle game. Every so often in the environment, you will need to find an object to proceed, or use each character's special items. What is clear is that Ubisoft wanted a game that people could finish and get through rather easily. This is not a frustrating or difficult puzzle game, and most only take around five or so minutes to figure out. It might be that you need to dig a hole with a spade, whilst avoiding the many bombs featured throughout. Or you might need to tend to a soldiers wounds with Anna before continuing.

It's a very clever game that rewards the mentality of trying everything to see what happens. Although sometimes this will lead to your character succumbing to the war (such as mustard gas), you are very quickly back in the level trying to figure out what to do. There was only once or twice where we got stuck and once we actually thought about the puzzle, it was easy to solve. However, we will say that due to this lack of challenge, in an extended game session, it can become a bit trite and repetitive. It's best to play this game in moderately short sessions to get the most out of it.

Aside from the main story, there are other items to find in the world. These items fill in a bit of the back story of the First World War and more specifically around the location you are currently in. For example, if you are in a town where mustard gas has just been dropped and everyone is coughing and spluttering, the piece of paper you find will explain all about how mustard gas was used in the First World War and how damaging it was to the people that inhaled it.

This actually makes Valiant Hearts a history teaching tool and if you are a history teacher there is every possibility this game could be used to teach people about the First World War. 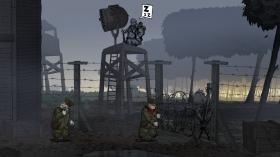 One thing that this game does extremely well is figuring out when people are most likely to feel sad and depressed about the story and mix it up with something funny or different. One such example is when you take control of a taxi with Anna. To the music of the 'can can', you have to dodge and avoid objects. It really does lighten the mood, and again reinforces how masterfully this game has been put together.

The game uses the Ubiart engine (same as Child of Light and Rayman) to display its visuals and it is stunning to say the least. As mentioned before, the cartoon style imagery that has been used does lessen the impact of some of the more shocking scenes, but to have those images in full color and non-cartoon probably would have gone too far. There is no real voice acting so to speak and most of the time there is a low, foreboding soundtrack except for when the developers think that they may have depressed you just a bit too much. 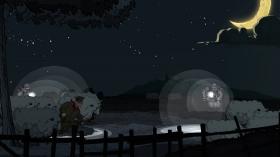 Valiant Hearts: The Great War is a stunning masterpiece that takes the source material of World War One and presents it in a way that is neither glorifying war nor cashing on in the era. This is a thinking person's game in more ways than one. The puzzles are not difficult to overcome, but the story and visuals are some of the most striking and impacting you will see in a game. If you shed a tear playing this game, don't feel bad, but realize that this really is one of the best games of 2014, and one of the most impactful video games made in a very long time.

PRICING: You can find the Valiant Hearts: The Great War PC Game for sale below. The prices listed are valid at the time of writing but can change at any time. Click the link to see the very latest pricing for the best deal.