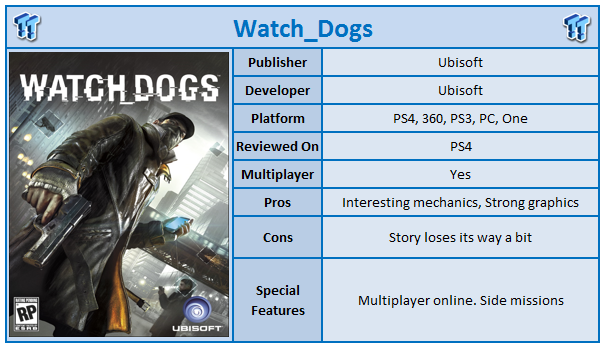 When Ubisoft unveiled Watch_Dogs (Watch Dogs) during its E3 2012 press conference, the gaming world watched in awe as what appeared to be the first truly next-generation game was unveiled. Microsoft and Sony were still being mum on the hardware and release timeframe, so this was the first indication it could be soon and Watch_Dogs hype began to go through the roof. Previously expected late last year around the console launch time, the game was delayed six months to polish it, amongst rumors of the game being repetitive and not interesting. However, the game is finally here, and whilst it retains most of the stunning ideas seen in the E3 2012 reveal, it is not the game that it could have been.

In Watch_Dogs you play as Aiden Pearce, a middled aged man involved with the wrong side of the criminal world and who has recently lost a niece to a personal mistake. Aiden is a top hacker who knows how to control the systems the city of Chicago run on which makes him a prime target for extortion and that is exactly what happens when his sister and nephew are kidnapped by a rogue hacker. From there, Aiden must try to comply with the demands of the hacker whilst simultaneously trying to find and save his sister and nephew. 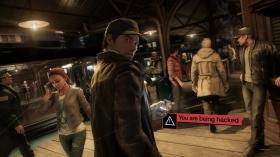 The key draw in Watch_Dogs is in many ways how it might reflect the way our cities function in the coming decades. Almost everything in the game world can be hacked for use by the mobile phone that Aiden carries. It is a matter of walking near the object, pressing a button and taking control. This also significantly affects the gameplay on offer. Whilst at its core Watch_Dogs is a third person action shooter, there is a level of smarts to this game that is yet to be seen elsewhere, and that alone almost makes this game a must play title.

Instead of going in guns blazing, Aiden can control objects in the world to achieve objectives. There really is nothing like completing a mission without alerting the enemy purely by taking over various constructs within the world to achieve the objective. It also happens to freak the enemies out. To reinforce this on everything but the easiest difficulty, Ubisoft has made the combat rather challenging and in an interesting move, you cannot shoot whilst driving. At first this angered us and we wondered why, but then it all clicked. It's to force you to think outside the box. 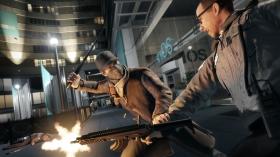 At first the part of the city you can control is limited. This acts very much like the 'bridges' we have seen in past open world games. You can go anywhere, but to take over a new areas' communications, you need to hack the CTOS server in that region. This is where the second smarts of the game appear. Instead of being able to just walk up to a server and hack it, you need to bounce around cameras and other objects to virtually move Aiden into another location. For example, in one mission, Aiden will sit outside a building and hack a video camera. From there you can hack servers, video cameras, really anything the video camera can see. This is how Aiden can move about the world without actually moving, so to speak.

The action and gunplay is serviceable, but thankfully there are more options for Aiden to explore. Watch_Dogs can give a sour first impression as it places restrictions on you not seen in other games, but once you realize, for example, you can blow up steam pipes under the street to take out chasing enemies, it completely flips the way you begin to think about completing missions. Also not triggering enemy alerts is also in your best interest as Watch_Dogs also contains a Pipe Dream style mini game for hacking servers and it's open season when Aiden is in the progress of a hack. No defence is provided.

The world that Ubisoft has constructed for Watch_Dogs gives some indication as to why it took five years for the game to be finished. It is huge and more interactive than any other city featured in an open world style game. The game is as previously mentioned set in Chicago, but there is nothing really that makes you go wow that's Chicago and perhaps they would have been better off coming up with a fictional town. The world is full of city folk as well whom you can gain information on just by pointing your phone towards them.

Along with this, you can hack songs, money and other items from their phones as you walk about. However, this can put a bounty on you for other players and AI characters to complete.

With all this positive news, there is some negative and that is Watch_Dogs feels like it has no real connection or soul. What we are talking about here is intangible, but it's something that successful open world games have in droves. That thing which keeps you coming back for more. About halfway through the Watch_Dogs story, we found ourselves struggling to push on to the end because the story just is not that good and also the characters are not easy to connect to. It's a strange thing because the rest of the game is just stunning, but as it turns out, this intangible feeling is in our opinion something crucial to the success of open world games.

The missions also do not have the greatest level of variety. You will either be hacking a server, surveying a character, running from the cops/enemies or infiltrating an enemy base. There is a little bit more variety beyond that, but it just feels like there could have been so much more to do in this world. Thankfully for Ubisoft the 'follow but do not get seen' missions are few and far between, but that which have replaced them in some cases are just not that interesting to play through. Side missions are present with gang take downs, collectable objectives and even a bounty hunt of a murderer is featured. If you really get into the world of Watch_Dogs, there is easily 50 plus hours of content here, but it's all dependant on whether you connect with the game world. 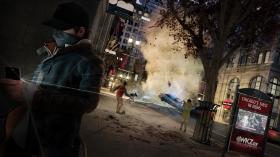 Visually Watch_Dogs is a powerhouse, but it is to be honest nowhere near what we saw during E3 2012. That was absolutely gob-smackingly-stunning, and whilst Watch_Dogs is impressive and runs smoothly on the PS4 system, we can't help but wonder if Ubisoft did themselves a disservice by having the graphics that high during the reveal. Not even the PC build is matching that level of fidelity yet. This is very much a next-gen game, but it's also not such a leap that will make you want to buy a next-gen console. The voice acting is again serviceable and this also makes Aiden a character which is hard to relate to.

Watch_Dogs is a game that had so much promise and most of the time lives up to it. This has been one of our most anticipated games, and whilst we are happy with the results, there is a niggling feeling that had this game changed slightly, it could have been a contender for the game of the year. What Ubisoft has achieved with Watch_Dogs so early in the console generation is nothing short of stunning, but it's not the technology or world that lets the game down, it's the story and the characters.

Thankfully for Ubisoft this can easily be rectified in Watch_Dogs 2 and if they pair this world and technology with a bunch of more interesting characters to play with, then they will have a smash hit on their hands. Watch_Dogs is not a bad game, it's not even an average game. It's a polished experience that is impressive, but one that really needed a few more tweaks to take it to the stratospheric heights it was aiming for.

PRICING: You can find Watch Dogs (PS4) for sale below. The prices listed are valid at the time of writing but can change at any time. Click the link to see the very latest pricing for the best deal.