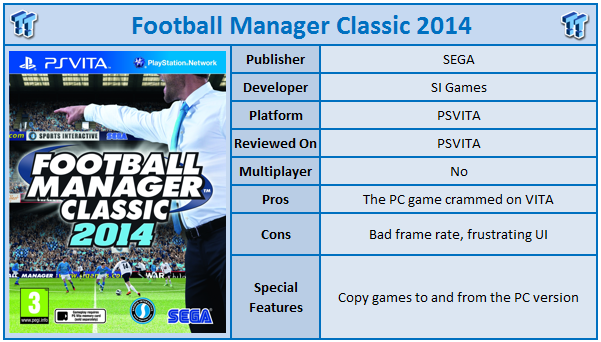 When it comes to Football Management games, there is no better than the Football Manager series that Sports Interactive produces. Those guys have been in the game for decades now and have shipped titles on both consoles and PC in the past, so when the VITA version of Football Manager 2014 was announced, it was met with quite a bit of excitement from the portable community. On paper, it sounds like a fantastic idea: a fully featured PC port on a handheld device allowing you to sync with the PC saves to continue on the go. However, in practice, it just hasn't worked well, and FM Vita is one of the most disappointing games on the platform to date.

Football Manager Vita takes the Classic mode from the PC game and shrinks it down onto the smaller screen of the PS VITA system. For those unfamiliar with the PC version, Classic mode is a significantly stripped down version of the main normal mode that focuses on getting through seasons in a shorter time and allowing you to continue to have a life. On the PC when it was added, it was a masterstroke and made the game even more accessible, but on VITA, it's not quite there. 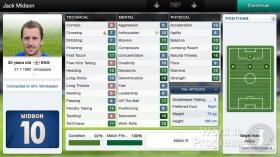 FM Classic allows you to have up to three leagues going at once on the PS VITA, which does limit your scope of the game, but given the size of this monstrous game in its full form, it's of no surprise that this is the case. The bonus to this is of course being able to sync with Steam, and this is done by logging into your steam account on the PS VITA system. We're pretty sure this is the first time a VITA game has been synced with Steam, and that is an accomplishment in itself.

However, in some ways, the positive news about Football Manager VITA stops there. The fact is that Football Manager does offer what it says on the box--the full Classic version (with one glaring exception) from the PC build--but it does it in a way that is frustrating to the extreme and had us wanting to put the game down within the first hour of playing it. This is not something usually attributed to an FM game (we've put over 200 hours into the desktop 2014 version). 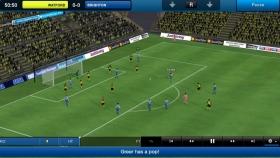 The first major problem is the interface and controls. The touchscreen is used to a large degree, and whilst on paper this may have seemed like a smart idea, this is actually one of the game's biggest flaws. For some reason, the screen seemed unresponsive, and we had to tap multiple times to get the buttons to trigger. As well as this (especially in the match mode), some of the buttons are quite close together, and this can lead you to easily pressing the wrong button over and over again.

And finally, when one particular menu is pulled down, it covers some buttons that still look like they can be pressed with that menu down. This could have easily been fixed by allowing the joystick to control a mouse style cursor. Instead, the joystick is not used by the game at all.

However, that's not the biggest killer to this game; that comes in the form of the match engine itself. It is no doubt impressive that SI Games has managed to fit the entire 3D Engine into the VITA game from the PC, and it looks just as good, but the framerate leaves a lot to be desired especially in the wider cameras. Being a non-interactive game (you manage players rather than control them), this is not as big of an issue as it could have been.

The absolutely most unexplainable thing about this, though, is that switching to the 2D Engine does not improve the framerate all that much. The game also forces saves before and after every match. Each save takes around ten to fifteen seconds. It just seems like overkill, especially when the VITA handles losing power so well (save states, etc.). 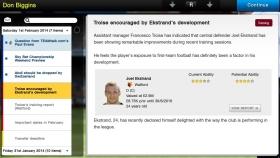 And the final blow to the game is the lack of instant result being available. On the PC game, you can in the Classic mode click instant result to get basically a result of the match based on your pre-game prep and get on with the next match. This seems perfect for the VITA, but for some reason has been left out. Instead, you have to sit through the matches. Now, of course, if you aren't into the matches, chances are you wouldn't pick this up, but for those matches you know will be boring and easy (FA Cup versus a league two team, for example), it would be nice to skip them.

Aside from the main game mode, the challenge mode has come over from the PC game as well. This mode sets you up with a challenge, such as stopping a team from being relegated with a huge injury list or managing a team going broke to find its feet and keep afloat. These challenges are a fantastic distraction from the main game mode. The micro-transactions have also made the jump from the PC, allowing you to boost your club's bank balance in-game via real-world cash, and you can also buy unlockables, such as the removal of transfer windows. 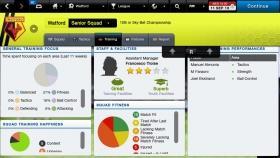 Looking beyond all these issues, you will find a very good representation of the FM formula. If you can look beyond the glaring flaws with this game, then you really will have the PC experience on the road. It is surprising that this game has come out in this state (we actually had to ask other players of the game whether they saw these flaws to ensure it was not our VITA system playing up), especially when SI Games has produced two quality PSP games in the past. The game is not so far gone that a patch or two couldn't bring it up to speed. Let's hope SI Games does just that.

PRICING: You can find the Football Manager 2014 (PS VITA) game for sale below. The prices listed are valid at the time of writing but can change at any time. Click the link to see the very latest pricing for the best deal.