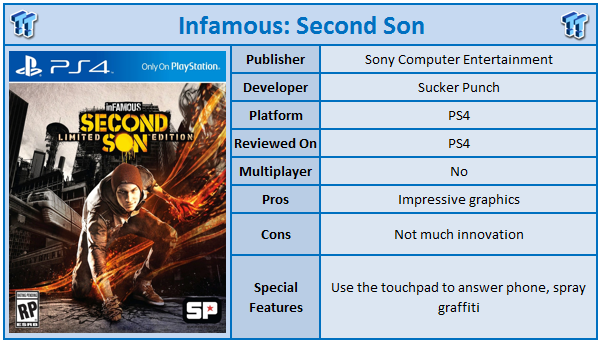 During the lifetime of the PlayStation 3, Sony was able to launch a number of first-party titles that turned into franchises and became synonymous with the PlayStation brand. One of those brands was Infamous, which placed the protagonist Cole into two games across the generation. Cole's draw card was the special powers he had access to, and it is this feature that Sucker Punch has gone back to for the third game. However, this time on a new system, we have a new character and this is actually one of a few poor decisions the developers made with this game.

In terms of storyline, Infamous: Second Son really is a reboot. Cole is long gone, and now you control a character named Delsin Rowe, a disobedient typical teenage kid who thinks he is better than the world. Delsin is suddenly thrown into a chaotic world when Bioterrorists take over the city of Seattle, and it gets even weirder when Delsin himself is exposed as having been contaminated by bioterrorists. From there it is up to you as Delsin to determine if you will use your powers for good or evil, which very much follows the same clichÃ© game mechanics as the previous games. 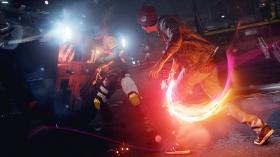 And this is where we find the first problem we have with this game: the lack of innovation. This is a brand new game on a brand new system, and it may as well have been called Infamous 3 because there really isn't that much new to crow about. Infamous: Second Son is a game with next generation visuals paired with past generation game mechanics and design. It is a game that could have been so much more but ends up going back to the regular tropes of third-person action games.

That's not to say Sucker Punch has used nothing of the new system but perhaps not as much as we would have liked. One nice feature is the use of the touchpad on the DualShock controller. To spray paint walls, you move your fingers over the touchpad, and to answer Delsin's mobile phone, you tap the pad. It's a nice use of a new feature, but as the only area where innovation can be seen from the new technology (aside from the graphics), it's a bit disappointing.

The mission variety really isn't there in the main storyline sequences, and most of the story sequences do not take advantage of the various powers that Delsin has on offer. As you progress through the game, more powers are unlocked (and you as Delsin have to choose which is best for the task at hand), but other than that, the actual missions are fairly run of the mill. Every so often there is a boss fight to mix things up, but aside from the aforementioned use of the touchpad to answer a phone call or spray some graffiti, there really is nothing that significantly strays from the original two games. 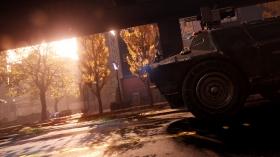 Whether that is a problem to you will be determined by how much of a fan you were of the previous games, which were admittedly very solid titles. The game is also over before you know it with a play through clocking in around seven hours. That said, if you really get into the game, you can play it through twice to see the good and evil endings. That remains a key mechanic of the game with Delsin being rewarded for either being consistently good or evil with numerous weapons, but if you happen to be good or evil here and there, you miss out on a few things. There is choice, but it is limited based on this. It can be so frustrating to build up a strong weapon from doing positive acts only to accidentally kill a civilian and lose that power up right away.

However, when you get past the disappointment that this game flies very close to its predecessors, there is a good game to be had here and an impressive one considering how early we are in the PS4 cycle. There is no doubt that the developers are trying to use the PS4 power as much as they can. The draw distance is nothing short of stunning. Having Delsin look over the horizon from the top of a building is nothing short of spectacular as you realise just how far the game is rendering the city.

Disappointingly, in the main story, there are only three powers on offer for Delsin (Smoke, Neon, Video, and we'll leave the last one spoiler free), and when compared to the previous games, this is a tad disappointing. You can upgrade the powers to new levels and options by finding drones with upgrades, but there is definitely less on offer. 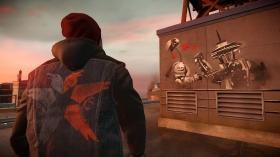 This leads into the visuals of the game, which are again spectacular. It's the first console game since Killzone PS4 that we have really been stunned by how good it looks on the first time it boots up, and some of the visual effects really are stunning. For example, one of the powers, Neon, allows Delsin to draw power from the various neon lights dotted around the city. To do this, Delsin goes close to the Neon light, draws the power, and you see the colour being sucked out of the light directly into Delsin's hands. It's a stunning effect.

The visuals again, however, are not without their problems. When the action gets intense, the frame rate does drop significantly almost to a crawl, but given how good the game looks when its running at full speed, it's almost seems like an acceptable problem. The animation of the characters is also impressive as Delsin darts about the place, and the movement speed of the character traversing the environment is smooth as butter. The voice acting is done quite well, but it does make Delsin seem even more of a douche than he already comes across as, and his brother is not much better. 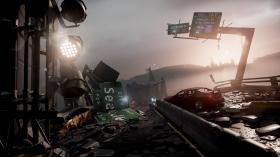 Infamous: Second Son is an interesting game to have four months into the console cycle of the PS4. Visually, it's a tour de force. It most definitely is the best looking PS4 game so far and a real advertisement for the power of the system, but when you compare the previous games to Second Son, it does come up somewhat short. A new generation may be an acceptable excuse to drop back a little bit, but there is no doubt that Second Son is not as fully fleshed out as Infamous 2. However, with that said, it's a solid game with amazing graphics. If you already own a PS4, then you could do a lot worse than picking up this game. It's a solid start to the generation for this valuable Sony series.

PRICING: You can find the Infamous: Second Son PlayStation 4 game for sale below. The prices listed are valid at the time of writing but can change at any time. Click the link to see the very latest pricing for the best deal.