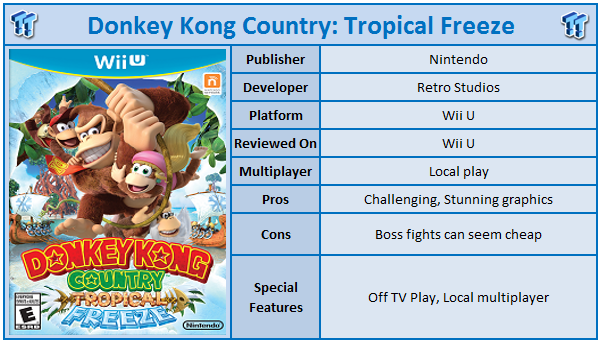 For years, people had wondered what Retro Studios was up to. With the release of the Wii U and nary a word about what one of Nintendo's premier first party studio was up to, gamers clamoured for information about what the people behind Metroid Prime and recent Donkey Kong games were doing. Nintendo made us wait and wait before finally confirming that Retro was working on a new Donkey Kong game. The announcement was met with deflation. Having now played the final game, though, Donkey Kong Country Tropical Freeze is quite possibly the best game released on the Wii U system to date. Retro yet again shows why they are one of the best around.

Tropical Freeze picks up with Donkey and his family sitting around for a family meal of bananas and generally enjoying life. Cranky, Dixy, Donkey, and Diddy are then rudely interrupted by the Penguin army who take over the homeland and freeze everything in sight, including Kong's precious banana stack. Being a monkey of adventure, Kong was never going to put up with this, and so the adventure begins with you tasked to free the homeland of the penguins and unfreeze Kong's banana stack. It's a fairly clichÃ© story, but really it's not the story you play this game for so it gets the job done. 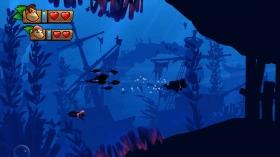 The gameplay in Donkey Kong Country Tropical Freeze very much mimics that of previous Donkey Kong titles, though there are a few exceptions that mix the gameplay up enough to make it seem fresher than it actually is. The main aim of the game is to get from point A to B, as with most platforming titles, but there are a number of side quests to complete, including finding jigsaw pieces and the letters of the word Kong. Again, this is nothing new, but it does give players a reason to keep coming back to the game a few times to try and unlock the secret world that is on offer for those who collect all the items.

And when you look on paper at the game's features, it most definitely is something you would think it needs. Only six world's are featured, but we are going to go out on a limb here and say it is likely you will take longer to finish this game than most other platform games on the Wii U even though they have more levels. This game is brutally difficult. This is a game that will make you want to smash your Wii U tablet to smithereens in frustration, but it's also a game that screams utter perfection in-game design at almost every moment. You won't want to smash your tablet because of frustrating gameplay; it will be because you have made a silly mistake over and over again. 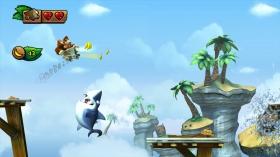 This game punishes mistakes harder than most, and, in the initial stages of playing, you will feel that it is unfair and a cheap game design. We certainly did, but, after reflecting on it a few hours after our first session with the game, we began to realise that this wasn't frustrating, bad gameplay, but actually stunning game design that challenged us just enough to make us want to play it again and again to beat it. Finishing a level in Tropical Freeze, especially towards the end, is a matter of getting a perfect run in that level.

There is a significant amount of 'level learning' required, and it is highly unlikely you will finish a level the first time. This is because you need to learn each level's different quirks. For example, the first time you make a large jump in a mine cart, you are probably not going to expect having to duck in the cart almost right away to avoid some spikes on the ceiling. This is the kind of thing you learn as you play the missions over and over again.

There is one area where we think the game may go a little bit far in this regard and that is the boss fights. These significantly ramp up the difficulty level of the main levels and are quite long. Again, it's all about getting a perfect run, but these boss characters generally have three or more shape shifting forms. It's as if they have been pulled directly out of retro games with the main task of these boss battles being to learn their combat pattern and then counter it. We haven't seen boss battles like this for a while--and with good reason--they feel frustrating and cheap. Unlike the main levels, this doesn't feel like good game design but instead just cheap difficulty spikes.

Another issue we have with the game is the controls occasionally don't respond very well. The tablet is not designed for such twitch gameplay in our opinion, and it shows in Donkey Kong. This is a game where precision is everything and there is nothing more frustrating in this game than getting a perfect run only for the analogue stick to not register you pushing down in time.

Unfortunately, the game won't let you use the DPAD to move Donkey Kong, so it is not easy to fix this. Our recommendation is that you get a pro controller to play with this game. The game also doesn't display on both the TV and the tablet at the same time, so you are not missing out on much by giving up that second screen. Given this is a first party game, it is absolutely unbelievable that this game does not use the second screen at all. If Nintendo isn't putting in effort to the second screen, then why would third party developers? 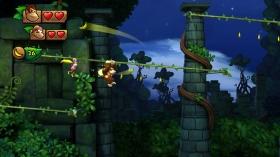 The changes that have been implemented to the game this time around are welcome and add positively to the gameplay on offer. For example, when you run across a barrel to find more Kong characters as Kong, you now have a choice as to who to unlock. The barrel randomly changes between each character's initials and the one that unlocks is determined by which initials are displaying when you choose to shatter it. There is also strategy to this with some characters being more useful in different missions and boss fights.

For example, Crankey Kong has the ability to pogo on his walking stick, which can stop you from being damaged by enemies on the ground, and Candy Kong uses her hair to give you a double jump. Each has his/her own pros and cons and is balanced well.

From a visual perspective, this is one of the best looking games on the Wii U. We are now truly starting to see the visual increase over the Wii system that we expected, and Nintendo is starting to compete in the visual games. The Wii U might be underpowered on paper when compared to the new consoles, but, in the visual department, it's definitely starting to show some grunt.

This is an absolutely gorgeous game that uses its cartoon style visuals to the absolute max, and, most importantly, there was not one frame rate issue to be found as we played through the game. Just looking at the detail on Kong's fur will give you an indication as to how good this game looks, and each world offers a significantly different visual style. In a way, it's a shame this game is so brutally difficult because you have to concentrate one hundred percent of the time as opposed to soak in the stunning visuals. The soundtrack is also a masterpiece, but, given the recent DK games, this should be of no surprise. 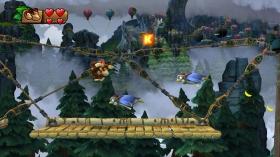 Donkey Kong Country Tropical Freeze was a game that, when first announced, was derided as yet another Donkey Kong game, but it's clear Nintendo and Retro knew what they were doing. Tropical Freeze is a stunning Wii U game that quite simply every gamer must play. If we were more confident in the future release schedule of the Wii U system, we would say it's enough to buy a Wii U for, but we can't say that just yet.

For those who have a Wii U, games like this are the reason you purchased the console. The fact it doesn't use the second screen at all is an interesting move on Nintendo's part, but perhaps it's just an acknowledgement that everyone is just using the gamepad for off TV gameplay anyway. Tropical Freeze will be up there come game of the year time, and Retro has yet again delivered a stunning masterpiece.

PRICING: You can find Donkey Kong Country Tropical Freeze for sale below. The prices listed are valid at the time of writing, but can change at any time. Click the link to see the very latest pricing for the best deal.