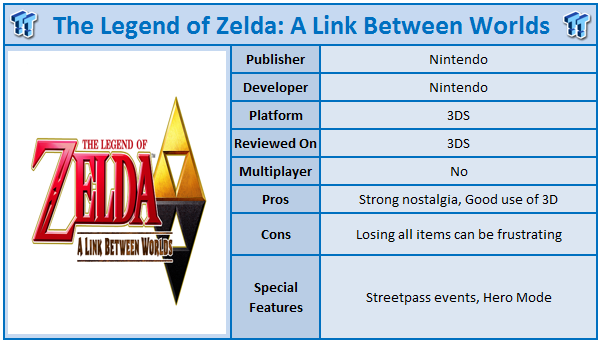 If you are a gamer past your mid-twenties, it's likely that you have owned a SNES, and you have also owned The Legend of Zelda: A Link to the Past along with it. A Link to the Past is a ground breaking RPG for the SNES system, starring our old hero link. A Link to the Past is often called the best Zelda game of all time, and where it all started (despite that being incorrect), and so when Nintendo announced that they were going to make a sequel of sorts, there was not only excitement, but also trepidation.

If Nintendo had gotten this wrong, it could have soured our memories of the original game, but thankfully for Nintendo, it has not only reminded us of that famous SNES game, but it has also built the reputation even further.

Although not a direct sequel, or remake, A Link Between Worlds borrows a lot from its predecessor, including the story, angle of the visuals, and the enemies on offer. This is part of the nostalgia overload that hits you as soon as the game begins (assuming you have played the previous title). Every so often whilst playing A Link Between Worlds, you will remember a section from the original game (such as the lost woods), and smile as you come across it in the new game. The feeling of knowing the developers have put that in specifically for that purpose is great, and the little grin is for the fact you have picked up on the crazy level of fan service Nintendo has included.

However, once you move past the nostalgia overload, then obviously it comes down to the core gameplay, which also shines. Funnily enough, the core gameplay is also an area where you will start to feel like this really is a very well made update to the original game. Link is still viewed from overhead, and you still 'swipe' with the sword in quick succession to take out enemies. A Link Between Worlds is still a game that relies on timing when dealing with enemies, and also moving Link around in a quick manner to avoid the attacks. If you play A Link to the Past, and then play A Link Between Worlds, in terms of the feeling of playing as Link, there really is not much difference at all. 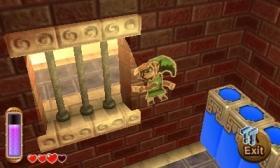 The story itself, and the tasks you complete, pretty much follow that of the older game, and this actually has its advantages. First of all, the original story was actually interesting to play through, and so the fact that some of the tasks in this game are the same isn't a problem. There's also the bonus of pretty much knowing what is involved most steps of the way if you have played A Link to the Past. That said, there is enough change to not only keep the game fresh, but also challenging.

However, there have been some changes that take advantage of the 3DS system quite well. First of all, there are numerous dungeons present, but after the first few they can be tackled in any order, which is a nice change to the usual Zelda formula. Each dungeon does need a particular weapon to complete, but in A Link Between Worlds, the game does not feature these weapons inside the dungeon; instead you rent them from a new character called Ravio. 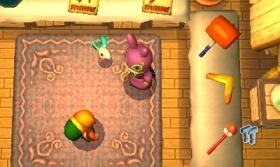 Ravio sets up shop in your own house, and offers items for rent such as the hook, bow and arrow, and hammer. The game is very good at telling you when each weapon is needed, and as such it's not a problem that the dungeons do not give the weapons. Other changes include a quick travel system between visited areas of the world, and perhaps the biggest change, which is the ability for Link to blend into walls.

This is where the key gameplay changes can be found; this new ability also forms a lot of the puzzles that are present in the dungeons. After a short time in the game, Link can blend into the wall like a painting, and walk along it. This can assist with crossing gaps, as well as moving outside through a barred window. It does take a little time to remember that this ability is available when solving puzzles, but most of the time the puzzles can be solved fairly quickly. The dungeons do offer quite a challenge, but the bonus is that you can tackle them in any order.

The dungeons are also completely different to that which was featured in A Link to the Past. Basically, this is because there are some items that have been included in the Zelda franchise for the first time, but also because of Link's ability to walk into the walls. Another change is that instead of having a limited number of ammo (with the bow for example), the game now contains a meter which depletes and recharges over time. This may sound like it's turned the game onto easy mode, but in reality, A Link Between Worlds still offers a fairly decent challenge. There is even a harder mode known as Hero mode, which is unlocked when you finish the game for the first time.

The game uses the 3D capabilities of the system well, and it is a lot easier to finish some of the dungeons with the 3D Enabled on, due to the way the game uses height. For those playing on the 2DS, this is disappointing; however, it is by no means unplayable in only 2D. It also helps that the game is absolutely stunning to look at in 3D. There is no doubt that Nintendo is starting to get to grips with the 3D graphics, and is producing some amazing visuals on the machine. 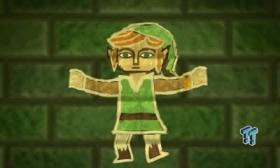 The game controls well on the 3DS system, and interestingly enough, it is possible to play the entire game without using the stylus. It also doesn't ask you to do silly things like tilt the system left and right in public, so it is a game that really can be enjoyed anywhere. The addition of the quick travel system, as well as easy to find save points, make it a game that is also suitable for playing in short spurts, but don't be surprised if you find yourself unable to put this game down.

On the visual side of things, as previously mentioned, the 3D effect has been implemented stunningly well, but aside from that, the rest of the visuals are also impressive. Young Link running about the place with his sword really does look like a 'HD' version of A Link to the Past, and the replication of the land and enemies from the SNES game is incredibly authentic. The most impressive aspect of the visuals is the frame rate, and the fact that it really does never drop. The game remains rock solid, even with many enemies on screen, and this really enhances the immersion you can feel when playing it. It also gives you nothing to blame but yourself when Link dies. 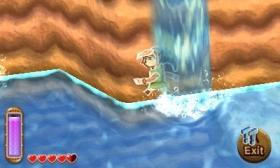 The music also deserves significant mention, because most of the songs are all updated versions of the original game. Don't be surprised if you are playing with the speaker on, and someone comes up to and asks if you are playing A Link to the Past; the music really is that close to the original title. However, you will notice a few slight changes, and whilst the characters are not voice acted, they do have their peeps every so often.

Although the game does not feature a specific multiplayer, it does use the StreetPass functionality of the 3DS device. When you come across another person playing Zelda who has StreetPass enabled, a shadow link will appear in your game world. Once you track him down, you can fight him one-on-one to try and gain a large amount of rupees. It's not true multiplayer, but it is an interesting addition to the game all the same.

The Legend of Zelda: A Link Between Worlds could have gone horribly wrong for Nintendo. It could have led to a tarnished history of the franchise, and left a stain on one of the most loved Zelda games around (and in many ways the game that brought the franchise to the forefront back in the day). However, the risk has paid off, and A Link Between Worlds is probably the best 3DS game released so far. It's a stunning tribute to its older sibling, but changes enough to keep it interesting. If Nintendo releases more 'remakes' in using this mould, then the future may just be bright for the company after all.