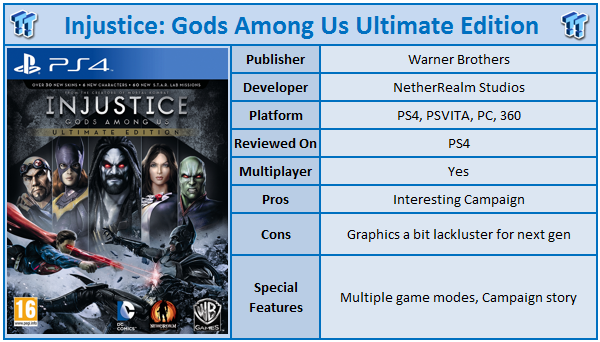 When it was originally released, Injustice was praised for its strong campaign, visually pleasing graphics and generally solid gameplay. With the PS4 apparently lacking a fighting game for launch (until this game was announced), it made sense for a developer to come along and build a version for the platform and that is exactly what Netherrealm along with High Voltage Studios have done. So less than a year later, we have the 'HD HD' version of Injustice Gods Among Us exclusive to the PS4 on the next-generation platforms. So, what has six months added to the game? The answer is not much, but it is still very much the game it was six months ago and that isn't necessarily a bad thing.

Rewind. For those who missed the game first time around on the now last-generation consoles, Injustice picks up after the Joker (Injustice features characters from the DC Universe world) tricks Superman into killing Lois Lane and their unborn child in an alternate universe. As revenge, Superman kills Joker and takes over the world in a dictatorship style government.

It ultimately becomes a story of Batman vs. Superman, which given the recently announced film is quite interesting. After the war rages for a few years, an alternate universe is discovered where Superman has taken over and some characters from that universe are transported over to help defeat the Superman regime. And yes, it is as crazy as it sounds, but somehow it works. 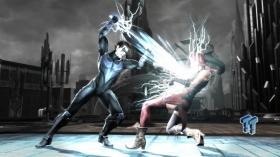 The actual fighting gameplay is 2D based with 3D style mechanics thrown in. The fights themselves last quite some time, owing to the fact that each character generally has a high level of health, and even when you manage to pull off a combo, not much damage is dealt. Where the damage amps up is the supers which are some of the most visually appealing aspects of the game. When a super is executed correctly, the camera takes over the character and basically weapons of mass destruction are unleashed on the foe.

Building the super meter is done in two ways. Either by performing good combos that the game recognise as skilful, or by getting hit by the enemy. This is not a game where button mashers can generally mash the controller and end up with a super out of nothing. It is skill based gameplay and that in some ways separates Injustice from some of its competition. 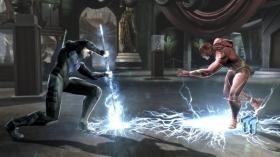 Along with the supers, the other main difference when compared to other fighting games is the interaction with the environment. Whilst the game takes place in a 2D style engine, the characters can interact with objects in the world such as taxis that can be thrown, or in particular areas of each map, you can directly smash the character into an object that sits in the background. These interactions can be particularly rewarding, especially if you manage to turn a fight with some of these mechanisms.

The campaign mode is actually one of the better fighting campaign modes around with it taking around six to eight hours to complete - far longer than most fighting games on the market. And whilst the story on paper sounds crazy, it does a pretty good job of explaining why these characters end up fighting with each other and provides some context to the gameplay.

There is also a STARS mode, which is basically a challenge mode with numerous levels to complete. 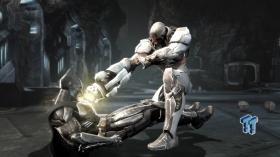 The PS4 build of the game includes all the downloadable content that was released after the original game release. Whether this means something to you or not depends on whether additional characters and skins are important to you in a fighting game. The addition of new characters is good for multiplayer, but it has not changed the campaign mode at all.

These new characters are not used at all in the campaign, which is slightly disappointing. The characters which are new to the game include Batgirl, General Zod and Martian Manhunter. So, it's fair to say that these are not the most famous DC characters around and are more for fans.

The levels in which the game is set are quite varied and borrow heavily on many of the characters universes as well as the overall DC universe. The locations include famous places such as the Batcave and the Fortress of Solitude for the two main characters (Batman and Superman), as well as some general locations where the fights take place.

The majority of the locations have objects that can be interacted with and in some of the levels in the campaign, a mini game plays out before the fight to determine health levels. On the PS4 you can utilize the touchpad on the PS4 controller to complete these mini games, but all this succeeded in doing was showing us how unresponsive the PS4 touchpad can be when used in quick succession.

Visually the game is impressive and is an improvement on its previous generation cousins, but to be honest, the jump isn't as big as you would expect moving up to the next generation. However, the game does still maintain its frame rate throughout even with a lot of action on screen and in a fighting game this is more important than visual fidelity and improved graphics. The character models are also impressive, however they really are just improved versions of the last generation characters in terms of detail. Items such as the animations etc have not been revisited.

Whether you should buy Injustice on PS4 comes down to one main question; did you already buy it on the previous generation consoles? If you did, then the answer is no - you should avoid this, unless you are a major fan of the game, but if you didn't then it really is one of the best fighting games produced in 2013.

The way the developers have used the DC universe in the campaign is interesting, and the lengthy campaign is something that you don't see often in the fighting genre and after that is complete there is even more single player content to dig into. Just don't come into the PS4 version expecting a huge leap over the last generation and you just may find something to like.