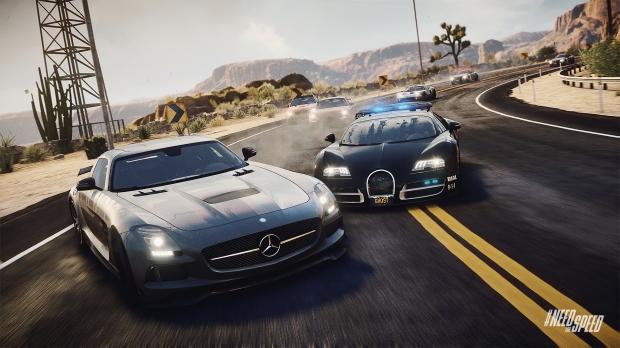 With the new generation around the corner, it's always exciting to get hands-on with the hardware before the release and publishers have been offering for a few months now the opportunity to play their latest releases early on the new hardware. NFS Rivals is a big game for EA. It's the first game to be released with Criterion overseeing the entire franchise and the first game from a brand new EA Studio called Ghost Games. It also happens to be the first NFS game that will be released on the new platforms and so they recently invited TweakTown to their HQ to play a near final version of the PlayStation 4 version of NFS Rivals. Both it and the PS4 console are looking good - here's why.

The first major change with NFS Rivals is that there isn't much of a storyline to speak of. Gone are the cheesy CG movies from titles and instead it is replaced by pure racing. There are two sections to the game; the police section and the racer section, with each side offering a different gameplay experience. The police side tasks you with taking out racers, calling in helicopters or setting up roadblocks, whilst the racer side as the name implies, is all about racing, escaping from the cops and in many ways just having a fun time in a selection of souped up supercars.

You can switch between the two careers after each mission and on the part of the designers that appears to be a masterstroke. We put four hours into the game during our preview and about halfway through of playing the cops, felt it was time for something else. Being able to then just jump into the racer mode was the perfect way to feel reinvigorated to keep playing the game. 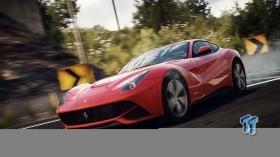 Each career mode on each mission tasks you with a number of things to do before progressing. On the police side, it starts out easy doing tasks such as arresting racers or using technology to take a car down, whilst on the racer side its escape the cops, use technology or even take a cop car out. As you progress through the chapters in each career, you unlock more tools to use and also more supercars.

In an interesting move, the police cars are gained as you progress through the chapters for free, whilst the racing cars have to be purchased. According to Ghost Games, this is because the police cars would be provided to the officers to fight the racers so it makes sense and we tend to agree.

In terms of the actual gameplay, the Need for Speed style is here for all to see. Fast cars, fast cops and huge crashes are all part of the game. However, it's when you look beneath the surface that you find the true genius of the game.

Whenever you are playing the game, there is the opportunity to connect with other players. There is no specific multiplayer mode for the game. Instead as you progress through your career, you will either be playing against AI targets or human targets, depending on if you have connected to the EA servers or not.

This feature is seamlessly implemented and EA has termed it AllDrive. You will know when it has been triggered because the game will display the username of the other racer. So you as a cop can go around hunting the local area looking for some gamers to take out and if it happens to be another human, the game pops up with that information. This also leads to some of the tasks in the game. For example, if you are a racer and get taken down by a cop, if you then take that cop out next time, you get a revenge point bonus.

The game is also about risk and reward. As a racer, you gain heat levels each time you escape from the cops or perform something illegal that a cop sees. The more heat you have, the harder the police will chase you as they get a bigger bonus for taking the car down. The more heat you have the more points you will have and it is these points that allow you to buy new cars. The longer you keep a point bonus going, the higher the score gets, but the riskier it becomes. Banking the points is as easy as visiting a hideout, but if you do it too often, you just won't get the high scores. 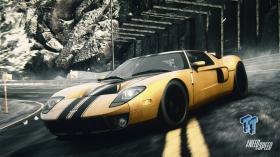 The beauty of the open world of NFS Rivals means that there is almost always something to do. We found ourselves constantly being distracted by tasks around the open world or just chasing another car. As you cruise around, for example as a cop, you can chase down racers simply by pressing a button, whilst as a racer you can challenge other cars to a head to head race when you find them. The open world of this game is what really makes it enjoyable and upon release it will be a blast to play on PSN

For PS4 specifics, the game handles just fine on the DualShock 4 controller and the visuals of the game are impressive. Although it is locked to thirty frames per second, the game still gives off a strong sensation of speed, especially in the bumper view. Where we noticed the most difference between current generation games and the PS4 build was the lighting. There was some truly stunning effects of lights bouncing off the road, especially as night turned to day during our play session. Ghost Games has definitely tried to tap into the stronger power of the console and there will be a significant difference between the PS3 and PS4 build upon release. 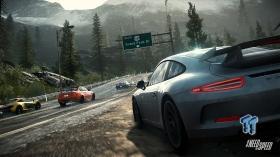 NFS Rivals has become one of our most anticipated titles. It was in our vision before of games we wanted to play, but now with the AllDrive system, we can't wait for it to go public and for thousands of racers to be playing. There was a time where NFS was struggling as a franchise, but it is clear that Ghost Games (along with Criterion in recent years) understand what makes the franchise so popular.