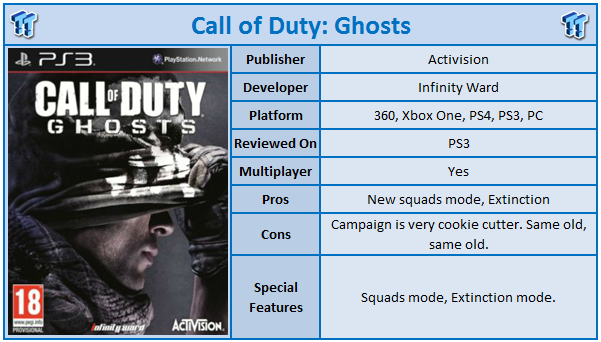 When people think of Call of Duty, they think of one of two things; an amazing time sink that they have spent hundreds of hours on or a game that is as cookie cutter as it gets, released yearly and is the same each time. There really seems to be not much of a middle ground on this title, yet year after year, Activision manages to make millions of dollars selling the thing. As we approach a new generation, a new challenge presented itself to the developers. Can they keep this going over the generation gap? And is Call of Duty: Ghosts still keeping up the franchise's strong points? The answer to these questions is both a resounding yes and a resounding no, depending on if you are talking about the campaign or not.

Call of Duty: Ghosts picks the story up during an attack by a combined South American continent against the United States from space. The US has developed a space project named 'Odin', which is a space defence system that can be used to strike any target on earth, at any time. Early in the game, this structure is taken over by what the game terms the 'Federation' and is used to destroy the major cities of the United States. From there we are told about the Ghosts, a specialist military unit which performs the most dangerous tasks behind enemy lines. 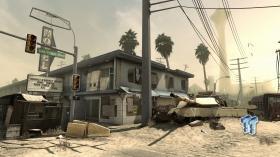 The main problem we have with Call of Duty: Ghosts campaign is that it yet again falls into the category of America: f**k yeah. Infinity Ward needs to realize that there are people outside the US that play their games and that just once it would be nice to see something different. However, that is not our biggest problem with the campaign and that is more around the feasibility of it all. Call of Duty has always been known for bombast and over the top sequences, but Ghosts takes it a little too far. This is a game that is somewhat supposed to be set in reality, but it is far from it, and it just gets a little too ridiculous, even when you keep in mind this is a Call of Duty game.

The storyline is also incredibly weak. The missions feel as cookie cutter as they come and it feels like there was a checklist next to the design document about what a Call of Duty game needs. Big explosions? Check. Helicopter sequence? Check. Tank sequence? Check. Playing through Ghosts gives you really nothing new (aside from one underwater sequence) that you haven't seen before during the previous campaigns. Call of Duty 4 was a game that shocked and surprised with the nuclear sequence and subsequent death of one of the main characters. We haven't had such a poignant moment in Call of Duty since, and it's a shame. And as for the ending? Don't get us started. The most unnecessary cliff hanger in gaming history. 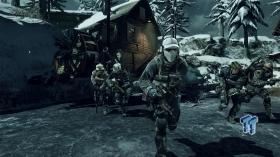 Ghosts remind us a lot of Rainbow Six. Instead of just going into military war zones and blowing stuff up, in some of the Ghost missions, you will be breaking into buildings silently and uploading a virus, or secretly blowing up a large ship from below its hull. These sequences are interesting and almost save the campaign, but every time you think the game is becoming a bit more interesting, a huge explosion has to occur just to remind you that this is a Call of Duty game.

Much has been made of the dog character within the game and that it would be Ghosts defining gameplay moments, but it turns out that isn't the case. The dog is one of the most underused sidekicks around and it appears only for a few missions through the campaign. When you do take control of the dog, however, the game shows some of its unique gameplay. Stalking an enemy character in the bushes as a canine is quite enjoyable and it would have been nice to see IW put even more focus on the dog squad, rather than relegating it to a few missions within the campaign.

The campaign is also fairly short with our play through clocking in just over five and a half hours - we finished it in one sitting. Infinity Ward has also dispensed with some of the better additions that Black Ops II added last year, including the RTS style defence sections known as StrikeForce and also the addition of multiple endings has gone out the door as well. This just enhances the feeling we have that this is a cookie cutter release.

Aside from the storyline being rubbish, the campaign plays as well as ever and from that perspective it is worth playing through just to see how over the top the campaign has become. Despite the numerous explosions and other crazy visual sequences that occur during the campaign, the game did not exhibit any frame rate hiccups and that is actually quite impressive to say the least.

Once you move onto the multiplayer, you will find yourself again in familiar territory and whether that is a good or bad thing really comes down to whether you want major change in the multiplayer or not. You still get kill streaks, you still level up and prestige and the game still is as fun as ever to play. But there have been a few additions and changes that make a good multiplayer game even better in some respects.

First of all there is the addition of the new 'Extinction' mode. In Extinction, you and a few friends take on an alien race that is invading the planet and it is up to you to stop them coming and to eradicate their hives. This mode reminds us a lot of games like Payday and Left 4 Dead with co-operative gameplay only on offer. It's an interesting move for the COD franchise to go in this direction and it does provide at least a distraction from the main campaign and multiplayer modes. The level system is contained within the Extinction mode, that is, none of the level gains you may get within Extinction carry over to the main multiplayer.

Aside from Extinction, the other new mode is 'Squads', which is basically a fully functional offline multiplayer mode with bots. All the game modes from the main multiplayer are available and in a surprise move, any levels that you gain offline are accumulated to the main multiplayer mode, so it's entirely possible to just continuously level up offline, before heading online. We think Squads is a fantastic addition to the game because it allows you to enjoy the superb multiplayer of Call of Duty without having to put up with some of the vile rubbish that this franchise unfortunately attracts online. It also is a fantastic way to prepare yourself for the multiplayer online arena if you are new to the franchise and as the saying goes, practice makes perfect. 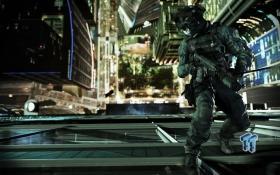 Several new game modes have been added for Call of Duty: Ghosts which gives an even stronger indication that the focus was multiplayer for this title, and thankfully, some of the new modes are incredibly fun to play. 'Cranked' is a mode where a player who kills an enemy combatant becomes 'cranked' and has thirty seconds to find another enemy to dispatch or lose their life via explosion. It's a fast paced mode that really puts the focus on finding enemies instead of hiding. 'Search and Rescue' is another interesting new mode where instead of instantly being able to return back into the arena of battle, a team mate can revive you.

Perhaps one of the more unique and interesting additions to Ghosts is the 'Hunted' mode. In this mode, you begin with a pistol with very little ammo, two throwing knives and a grenade, and in a death match style mode, you have to survive. Every so often crates fall into the battlefield containing significantly better weapons and so this plays on risk and reward. Do you go for the crate and risk it, or hang back and be happy with what you already have. This is one area of Ghosts were some truly unique gameplay can be found.

The maps of the multiplayer mode are significantly varied and different and larger than those seen in the past. On the current generation of consoles, this represents a slight problem in that the player count has been unable to be boosted and so sometimes it can be quite some time before you find another character on a map, which is in stark contrast to previous Call of Duty games. The higher player count on the next generation consoles will clearly account for this and fix the issue, but on the current generation, this is an issue.

When it comes to the visuals, the game on the PS3 is a mixed bag. There is most certainly sequences on the PS3 console and in the game where you can tell they were built for the next generation and to ensure the frame rate didn't take a hit, the developers dropped the detail level. There are still some impressive moments, but overall it feels very washed out and not as impressive as for example, Black Ops II, in the visual's department. The voice acting is as cheesy as ever and a cinematic score does generally add to the huge set pieces the game offers in the campaign mode. 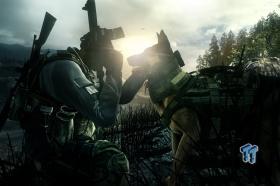 If we ever needed a game to show us that a series is long in the tooth, Call of Duty: Ghosts is it. The game that exploded into a multi-billion dollar franchise has ended the generation on an interesting note and one that makes us wonder if the series can successfully transition to a brand new generation. History is full of franchises that never managed to make the generation leap successfully and Ghosts gives us concern that Call of Duty could fall into this trap.

With Titanfall gaining huge hype and looking like a super serious competitor (and from the brains behind the massive Modern Warfare success), Activision could have a problem in 2014. Call of Duty needs major work if it is to continue to succeed in the future with the competition catching up faster than ever. The multiplayer saves this from being an almost complete write off. Knock 20% off the score if you are only buying this for the campaign, and in that case, you may as well look elsewhere.