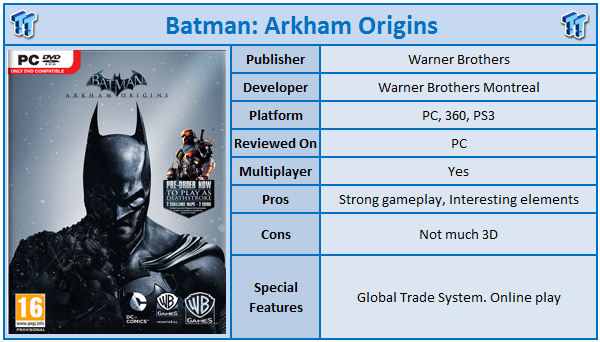 Until a few years ago, most superhero games, and especially Batman, were seen as a bit of a joke. Quick cash ins that publishers pushed out to meet film release dates that really sullied the brand more than grew it. However, then Rocksteady Studios came to the party - a developer clearly in love with the Batman brand and the right fit for the franchise. Rather than align with a film, Rocksteady came up with its own storyline and took on the more gritty Batman character from the most recent films. It was a success, but this time around we have a new developer on the case and a prequel - two things that generally can lead to trouble. For the most part, it hasn't, but where the spit and polish usually has been seen in recent Batman games, it doesn't appear here.

Batman: Arkham Origins is a prequel set before Batman: Arkham Asylum. For one night only, a bounty has been placed on Batman and the world's most fearsome criminals come to town, intent on taking down the masked bat. Batman sets out to discover not only who the criminals are and to take them down, but also who put the bounty on his head. If the storyline sounds generic, that because it is, but it does keep the game ticking along somewhat. 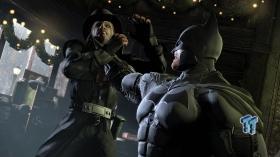 From a gameplay perspective, not much has changed for Origins. Batman still has his trusty gadgets to get around and the gameplay revolves around punching people a lot, solving puzzles and traversing open-world space. Those who have played Arkham City will find no surprises here and that is perhaps the biggest problem with Arkham Origins - it just seems all too familiar.

That's not to say there isn't interesting elements to the game. One of the key changes is being a prequel, Batman is not the most well-known character in the universe. You will fight cops and other law enforcement agencies trying to take you down as you are not acknowledged as actually doing some good. This flips the series on its head a bit with the previous two games acknowledging Batman as well known and not just a rumor on the street.

There are other slight changes as well, including new gadgets to play around with like the remote claw. This is used heavily in the puzzle sections of the game with Batman regularly tasked with having to pull objects apart or towards him to progress, along with other weaponry like the electric gloves, allowing Batman to combat electricity based enemies a lot easier, but overall the formulaic approach to the gadgets remains the same. However, one area where that has seen major change is getting around the city.

Where in the previous game you had to traverse the entire city yourself, in Arkham Origins, there is a fast travel system. Employing a method like that seen in Far Cry 3, for example, you have to take out radio towers around the city to gain access with the Batwing. It is possible to complete the game without actually taking these down in general, but it does mean a lot more combat and time between missions. It generally is worth taking the towers down. Using fast travel can see you miss one of the other additions to the game, the side missions on offer which are known as crime in progress and basically are like random events scattered throughout the city. 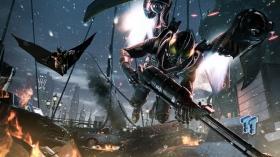 One of the key tasks that you will take on during the game is detective sequences. Throughout the game, there are crime scenes littered where you need to figure out what happened. This is actually thoroughly enjoyable and generally not too difficult to solve. Batman can recreate the crime scene by rewinding time digitally, finding new evidence and interrogating criminals. This fits into the Batman ethos well and we'd be happy to see this retained for future games. Batman also has the ability to use detective mode to find breakable walls and other environmental puzzles as well.

Aside from this though, we often wondered why we were actually performing the tasks we were. The game is narratively sound, but it just at times wasn't enjoyable to perform the tasks which are on offer in the game. It's entirely possible that this is franchise fatigue to an extent, but there are a few areas where the game feels a little phoned in.

There are also some technical issues with the game we encountered. There was a sequence after which the game got stuck on a loading screen forcing us to restart and from what we have seen, the technical problems were not unique to our play through.

Multiplayer also makes its debut in this title and again the fear is that this has been forced in to boost the sales of the product, rather than add to the series. The single player campaign is actually fairly short this time around, clocking in at about seven to eight hours. The multiplayer itself is quite interesting with three teams in play; two gangs and Batman and Robin. The hero gameplay is quite a bit different to the other two, with those teams basically playing a team based first person shooter, whilst Batman and Robin have to play in a stealth manner - caught unawares and they fall easily. It's an interesting twist and reminds us of the mercenary's mode from Splinter Cell. 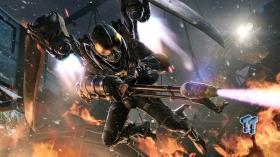 The aim for the hero characters is to build their intimidation level to its max. This plays right into the ethos of the series and fits the universe well. The gangs themselves have to defeat each other for victory. So basically, the law enforcers (Batman) have to stop the gangs from fighting each other, and also remain alive. It's nice to see that Warner Brothers thought of something new for this game mode as opposed to just throwing in team death match, for example.

On the PC at least the graphics are impressive to say the least with a grizzled Batman taking down enemies in a fluid motion and with some stunning animation. The game moves along at a fast pace most of the time and despite the large environments and long draw distance, even with an older PC, you should be able to handle this game quite well. Those with higher powered machine are in for a treat with Warner Brothers putting a huge effort into making a beautiful game. 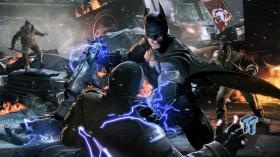 The environment you traverse, Gotham City, is quite detailed as well, although we do not think it is as full of activity as the previous title. Moving between each area is made easy by the bat claw being able to attach to buildings, and there generally wasn't a hint of pop in as we made our way through each mission. The radar in general gives you an idea of where to go, but occasionally it can be difficult to find because the indicator does not for example tell you that the target is on a roof, or on the ground.

There is a scene early on in the game when Batman returns to the Batcave. Batman informs Alfred of the bounty on his head and that he needs to take the criminals out. The paraphrased reply from Alfred is basically if Batman stays in for the night, he will have no danger, and the bounty will not be filled. It was a poetic moment that got us wondering about this game and whether it should have stayed on the drawing board. The answer to that question is no because it is a solid outing for the winged man, but if you come into this game expecting a revolution, not just an evolution, then you will be disappointed.