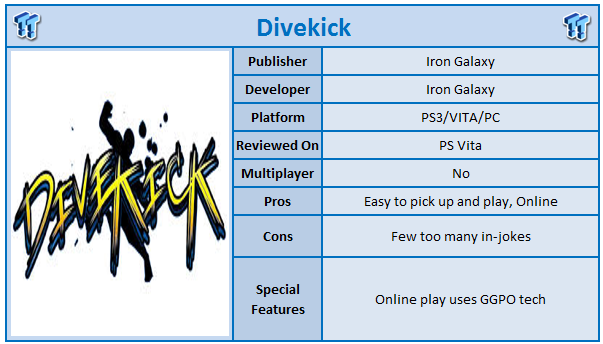 The story of how Divekick came to be is an interesting one by itself. Some of the elite fighting game community decided to put together a kick-starter to try and get the funds for a game which was a parody of one of the most common moves within a fighting game, the dive kick. For those unaware, a dive kick is when you jump into the air and then perform a kick move towards the opponent.

Shortly after the Kickstarter went live, it disappeared, with the announcement that Iron Galaxy Studios were going to take the concept and run with it. Divekick is not meant to be a serious fighting game, but it contains serious elements, and in many ways, it can be hard to know at times as to whether it wants to be a proper fighting game or one that is a parody, and that is one of its core problems.

The main gameplay of Divekick completely removes most of the complexity associated with fighting games. In fact, you only need to learn two buttons. You do not directly control your character, but instead only control when the character jumps either high, backwards or dives foot first towards the opponent.

Each round lasts a maximum of 20 seconds, with most significantly less than that, giving the game a very snappy feel. Although every so often in the single player, a story cut scene will play, which takes you out of the game somewhat and really breaks the snappy feel the rest of the game builds so well. 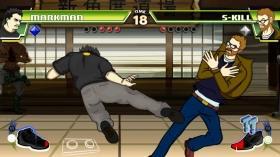 As with most fighting games, there is a single player campaign for each of the characters present and that is where the parody side of the game really comes to the fore. For example, there are two characters, Dive and Kick, who apparently were sent to Bel Air by their mother after they got in one little fight and she got scared.

There are other parodies, but we won't ruin those because some of them are truly laugh out loud funny. However, there are times where the game reminds you that it is trying to be serious. For example, in the options, you can set a maximum ping and GGPO frames, something that will be a completely foreign language to most casual players.

And this is where Divekick to a degree is a failure. This is not really a game that can be enjoyed by a casual player (to the degree others can) that has no idea about the elite fighting game tournaments and people involved in them. Many of the characters are based on people prominent in that arena such as Markman, the community manager from Mad Catz, and S-Kill, who is clearly based on Seth Killian, one of the more prominent fighting game people in the United States.

The other characters are generally based on parodies from other popular fighting games such as Street Fighter and Marvel vs. Capcom. To get the most out of this game, you really need to be in on the jokes, and whilst we were, not many people just buying something on PSN will be.

However, the game does exhibit a level of depth that was unexpected, and is not a game that can be completely mastered within a night. Each of the characters has a special move set and as well as this also dives and jumps with different angles. Just like a typical fighting game, it is likely you will find a character you like and will stick to that character. Also some of the characters have moves which go against the rest of the game where they will create lightning by dive kicking for example, as opposed to actually just hitting the other character. Again this adds to the challenge of the game. 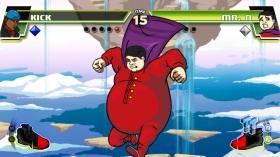 As you would expect, multiplayer is supported online, but also with there only being a requirement to have two buttons for controls, it is entirely possible to play local multiplayer on a single PS Vita unit. This is quite a crazy achievement and it actually works. There are both ranked and unranked online games and most of the time you will find other characters by searching in a lobby for them.

Multiplayer is where you will gain the most value from this game, and if you have no interest in playing fighting games online, this really isn't a game you should buy. 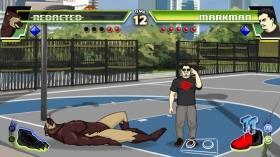 There are also some features in the game designed to assist you in laying the smack talk down with fan favorites from fighting tournaments such as fraud and choke part of the game as well. If you beat a character five-zero, they will be labelled a fraud. As we have seen in tournaments, this is a popular way to really lay the pain against an opponent.

Divekick is an interesting game and actually we found it somewhat a difficult game to review. We actually enjoyed it, but we know we enjoyed it a lot more than a typical person off the street would, because we could pick out most of the in-jokes present in the game.

If you are knowledgeable about the fighting tournament community or really just want a crazy fighting game to play, then this is the one for you. You may enter it thinking it will be a throw away game that you can be done with in a night, but the opposite is true. Divekick has an unexpected level of depth that may see it become popular for months to come.