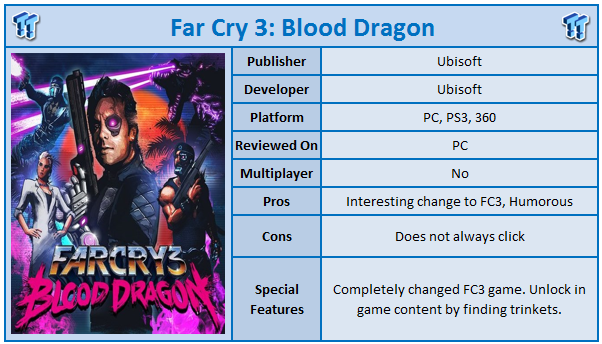 It's fair to say that Far Cry 3 was one of the most serious and dramatic games of 2012. Vaas, the main enemy, was one of the most vicious and brutal enemies we'd seen in a game like that for a long time. It went down as one of the best games of 2012 in a number of critic's eyes. At the time of the review we wondered how Ubisoft would top this or where they would go next and just six months later we have the answer, Blood Dragon. Although all is not it seems and the best way to describe BD is a total conversion modification for Far Cry 3, but it's still worth checking out.

Far Cry 3: Blood Dragon is really only related to Far Cry 3 in name and in engine, aside from that everything else has changed. New story, new graphics, new enemies appear in Blood Dragon and it often can be hard to tell that it really is just using the same map and engine as Far Cry 3. However, the first real indicator that this is completely something new is the storyline.

As the box says in Blood Dragon, it is 2007 and it is the future. That should give you some idea with the tact that Ubisoft was taking with Blood Dragon. In the 1980's people used to think in the year 2000 there would be hover cars, people would be able to fly and aliens would attack us. Some of this can be attributed to the science fiction films of the time that portrayed the year 2000 as cities in space and cyborg humans. And so it is with Blood Dragon, you play a cyborg human, trying to save the human race from an evil dictator who is trying to take over the world. 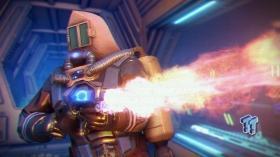 Whilst in general the game tries to portray itself in a serious manner, for the most part, this is Ubisoft building a complete parody of a 1980's science fiction film (as if they hadn't done that to themselves already). From the get go, the humour is apparent, and whilst some of it completely misses the mark and isn't funny, there is some genuinely laugh out loud moments, such as when the main character gets frustrated that the in game tutorial is taking forever to finish.

There is also some humour elements taking directly from sci-fi films of the era. Whilst in that era these films may have been serious, with the benefit of hindsight, we can see the stupidity in all this, and it flows through in Blood Dragon immensely well. However, the humour is only one part of the game, and where it really matters, the gameplay, it does seem a little lacking, especially when compared to its bigger brother.

Blood Dragon is a relatively short game. There are eight missions to complete and you can get through them in about five to six hours if you main line it. However, for a game that is only $20 and does not require Far Cry 3 to play, this isn't a killer blow. The map employed is the same as Far Cry 3 and you can still liberate outposts to gain new missions, earn money and be able to purchase upgrades. So, in terms of scope and size, it's about the same (aside from the number of missions). 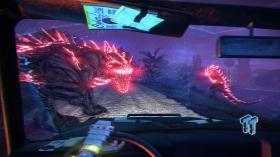 It is the missions where the game is somewhat let down. Missions can range from avoiding being eaten by a Blood Dragon, through to infiltrating a base, or blowing up a nuclear weapon. All very stock movie tropes from the era, but it just doesn't seem fun. As you mow down characters that look a lot like Daft Punk, it just didn't seem enjoyable. Whilst Far Cry 3 had a fairly amazing story that only went off the rails towards the end of the game, Blood Dragon never really gets going.

Throughout the missions you do have the ability to use some vehicles from the main game, such as the hang glider and jeeps. This allows you the freedom to tackle each mission in a different way, and a different way each time as you could do in Far Cry 3. However, again, we just found ourselves running for the goal, taking out the enemy or base, and continuing on, instead of strategizing like we did in Far Cry 3. There is no "burn the marijuana plants" moment in Blood Dragon, and that's a bit disappointing. 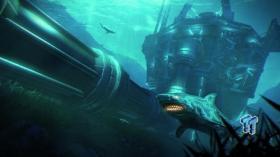 On the visual side Blood Dragon is striking to say the least. Whilst Far Cry 3 had a lush jungle environment full of predators like sharks and tigers, Blood Dragon seems to fit more in a "Tron" world. Again, this is a trope from 1980's films, so it fits the theme just fine. One thing we did notice is that this seems to require beefier hardware to play at higher resolutions, the game ran a little bit worse on our rig than Far Cry 3 originally did. Voice acting is passable, although to be fair some of the cheesy and poor dialogue in the game is intentional, and the soundtrack is ripped straight from 1980's stereotypes.

In an age where people complain about DLC being added to games and many times that DLC being already produced before the game is out, Blood Dragon is a refreshing take on DLC. Although, the fact it does not require Far Cry 3, does take it out of the DLC category, we'd love to see more publishers try this. Take your pre-existing game, play around with it and do something crazy and see what the results are. You just may find another interesting title like Blood Dragon. Ubisoft should be commended for producing this game, even with the flaws it has.