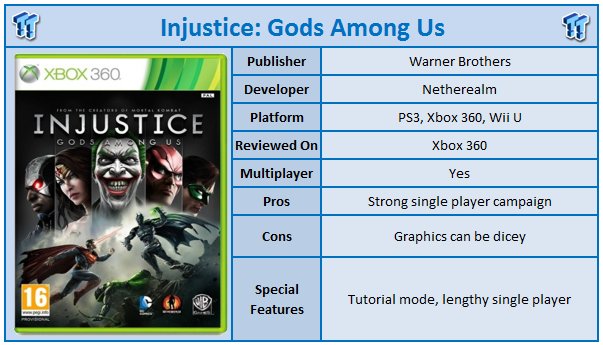 When it comes to developers that know their way around a fighting game arena, Ed Boon is up there with the best of them. Having worked for Midway for a number of years, Boon has recently setup his own development studio for fighting games, NetherRealm. The studio has turned its eye towards the DC brand of comic characters, and with Marvel enjoying success in the fighting arena, it's not surprising that DC was on board to get a game out the door. So, we have Injustice: Gods Among Us to pit DC comic characters against each other in a typical fighting format, but with a few surprises along the way.

Usually when fighting games are released, most reviews talk about how generally the game offers a very poor single player experience. Most of the time the developers come up with a silly storyline for each character that tasks them with fighting the others, and eventually the end boss, and generally it can be completed in less than an hour. Injustice completely flips the table on this stereotype. There is a meaty single player story to play through that will take about eight hours to complete, give or take, depending on the difficulty level selected. 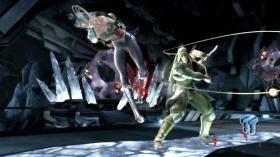 Set across 12 chapters, the single player storyline tasks you with taking control of one of the many characters in the game and beating other characters to progress the overall story. Rather than using the mechanic a typical fighting game would (pick character, play through unique story), Injustice selects the characters for you to play. This makes it a great training ground for online and offline multiplayer where you can hone your skills and craft, without being punished by the AI too much. At least this is the case on the lower difficulty levels. There are also some quick time events and other gameplay to mix up the usual fighting that takes place.

It's quite an enjoyable story to play through. The summary is basically the Joker has tricked Superman into killing Lois Lane and his unborn child, whilst creating a one world government. Additionally some clones of the famous DC super heroes have made it from another dimension into the main one, and are impersonating the characters and causing havoc. It is up to you, using the real characters, to take down the fake ones, and restore order to the world. As you would expect, there is some absurd storylines within the game, but overall it does help the single player campaign be actually worthwhile and not just a throwaway feature. 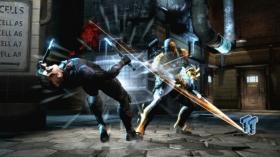 Without much surprise, each character has their own strength and weaknesses, and come with a multitude of special moves. Pausing the game in progress allows you to quickly view the moves that the character you are controlling can perform. This makes it very easy to learn the moves, as well as become accustomed to new characters quickly - perfect for the single player game. Some of the characters have moves that seem to fit the character well, whilst others seem to suggest that NetherRealm may have been struggling a bit to find the character some moves.

Once you get into the actual game, you will find very solid fighting action. Keeping in tune with the superhero stance of the game, each hit doesn't generally take that much damage off and fights can last for quite a long time. Building combo moves removes more damage and so you are rewarded for skill, as opposed to button mashing. With that said, NetherRealm has done an amazing job with the controls - one of the biggest problems with the Xbox 360 and fighting games is the DPAD control and how poor it is by design. 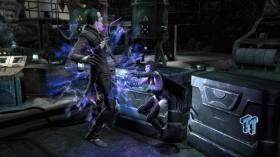 Somehow this is completely unnoticeable in Injustice, and we were pulling off special moves quite easily. The developers have clearly put a lot of work into how the game controls and this has paid off in spades for them. As you pull off special moves, you build a meter that can be used to perform each characters 'super' or finishing move on the other player. Again, you are rewarded for skill with combination moves adding significantly more to the meter, than just simple button mashing or hitting. To get you up to speed on this, the game features quite a comprehensive training mode.

On the visual side of things the game impresses although some areas do leave a bit to be desired. The facial look and animation of some of the characters (especially Batman) just doesn't look right, and seems completely out of place, and Wonder Woman having super gigantic breasts also doesn't make sense in the DC world. Some characters can move rigidly, but generally in combat situations the animation is super impressive. The voice acting is serviceable and gets the job done.

On the multiplayer side you can either play online via Xbox Live or offline with friends. One of the biggest problems with Injustice right now is not many people seem to be playing it and considering that fighting games rely on healthy communities, that should be seen as a warning sign that this game doesn't have the legs for people to still be playing it six months or more later. 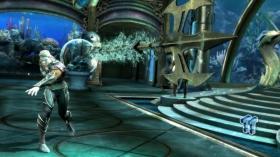 Injustice: Gods Among Us does what it set out to do, and does it well. A character driven story in the DC universe that offers a meaty single player campaign, as well as some good multiplayer action. If you are just looking for a multiplayer brawler then it might be best to look elsewhere, but as a combo, the single player and multiplayer package is one of the better value fighting games around, but you really have to like comic books to get the most out of it.