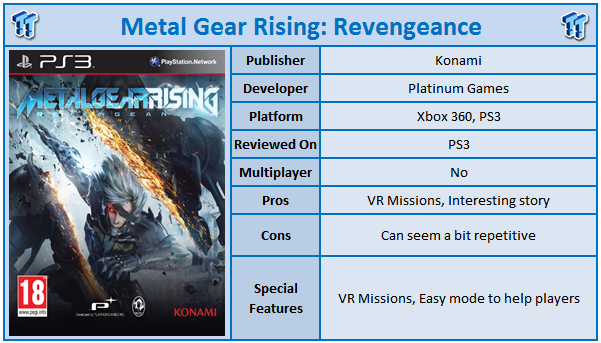 When it was first announced back in the day at E3, Metal Gear Rising Revengeance (Rising) became one of the most hyped games around. This was interesting because the very first showing of the game consisted mainly of Raiden cutting up watermelons. However, looking beyond that, it was the first inclination that we would be able to control one of the most popular Metal Gear veterans around in his own action game. Fast forward a few years, a developer change and a much longer wait than we expected, and the game is here. With Platinum Games in charge it was likely that the wait was going to be worth it and that has proven correct. Rising is not only a very good action game, but has many of the Metal Gear franchises nuances to boot.

Rising picks up four years after the conclusion of Metal Gear Solid 4, the year 2018. Raiden is making a living as a private military contractor in an African nation, tasked with keeping the president alive as a bloody civil war has just ended with tensions high. The game opens with the president being shot dead and Raiden living with the guilt of failing at his job. Raiden vows to hunt down the president's killer, and take them out. As per usual with Metal Gear games, there are many twists and turns in the story before the credits end, and that adds to the storylines intrigue in what would have otherwise been a fairly run of the mill action tale. Much of the voice dialogue has been ripped straight from the headlines of today, giving this game a very interesting political slant.

When it was announced that Platinum Games was taking on the development duties to get Rising out the door, everyone jumped to the conclusion that the game would be a bit like Vanquish. And so it has turned out to be. It was already expected that Rising would be controlled from a third person perspective, but there are a number of similarities to Vanquish, such as the speed of the combat, as well as the focus on style and finesse in the animations and take down sequences. 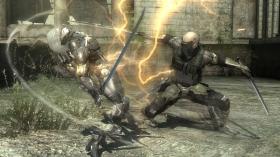 And this is where the games problems start to surface - many times during the game you will find yourself performing amazing moves and taking out enemies without really knowing what you are doing. Whether you see this as a problem or not is really an individual thing. We didn't find a huge problem with it because the absolute insanity of what is going on in the gameplay more than makes up for it. Rising is one of the most stunningly animated games in a long time with Raiden moving at fluency during high speed combat to amazing effect. One thing you do need to get right is the parrying of attacks. This forms a key component of the combat system with timing being the absolute key in this game. If that's not for you, the game does have an assist option, which can automatically parry enemy attacks, but that makes the game a bit too easy.

One of the more interesting facets of Rising is just how 'old school' it feels. That is not a criticism of the game - in fact, it is a compliment. Rising takes us back to the arcade days of slamming buttons to perform crazy moves on screen trying to outwit a relentless AI. When you eventually do have to restart a checkpoint after Raiden succumbs to the enemy, you won't feel anger or frustration, you will just jump right back in and try and get further. The almost instant load times help with this and the fact that no loading is performed once a mission is loaded enhances this even further.

The gameplay itself comprises of hacking cyborgs up into various many pieces before taking on a boss character. Where the game really starts to show a level of differentiation to something like Vanquish is the blade mode. Holding L1 gives you direct control of Raiden's slashing blade with the right analogue stick used to direct the angle of attack. During certain moments in battle the game will slow down allowing you to slash bodies into various bits with the aim being to grab the genetic cyborg heart from each character to truly shut them down, and to also power up Raiden.

The blade mode in general could be ignored if you don't find it your cup of tea with the game only really requiring you to use it twice or so throughout the campaign. However, to ignore this, is to ignore one of Rising's main features and the clear work put in by Platinum Games to get the controls just right.

The campaign comprises of seven missions which may not seem like much, but aside from one mission, they are all significant in length. They take around an hour or so each leading to an average game taking around seven hours to complete. This does seem a bit low and is disappointing, but there is enough to keep you wanting to come back for more. It really is one of those games that you can play over and over again trying to beat a high score, and not really get bored of it. The first thing I wanted to do when I finished the game? Start it again. There is also some VR missions to keep you challenged, plus Konami is promising DLC for the game in the future. 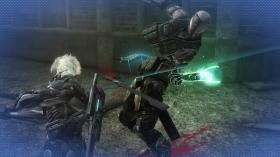 On the visual side of things Rising impresses in its fluidity of gameplay and animation more so than the graphics itself. That is not to say Rising is a poor looking game, but it's certainly not one that you would put up as a poster child for the power of the PS3 system. The game runs at a fast pace and never lets up with frame rate issues on occurring once or twice from start to finish on our run. The levels themselves have quite unique settings and when an environmental puzzle presents itself, it's usually quite easy to figure out where to go.

Metal Gear Rising: Revengeance was in many ways a game that was on life support. After its grandiose E3 unveiling, it went very quiet, and there were often comments that it may not come out. Kojima found the right development team to work with in Platinum Games, and the result is one of the best games of this console generation. Snake may not be around, but it doesn't matter. Raiden more than holds his own in the Metal Gear franchise.