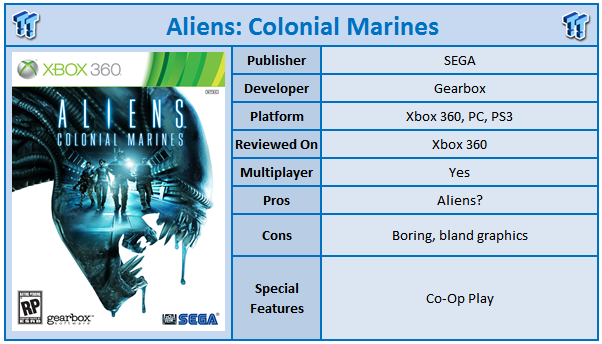 When it comes to movie franchises that have translated to video games well, Aliens has to be considered as generally one that can translate to an interactive format without too much problem. Aliens vs. Predator (circa 2000) on the PC is one of the most revered and loved adaptation of the film into game and it scared the living daylights out of many PC gamers. And so when it was announced that Gearbox was picking up the rights to have another crack at an Aliens game, there was quite a bit of excitement in the air. However, it's been a long wait, with the game originally announced in 2008. The wait has not been kind to the game at all.

Although Aliens Colonial Marines is set within the universe of the second film (and thus focuses more on action than horror), a specific story was written for the game that Fox has agreed will be included in the cannon of the series. Basically this made the game a sequel to the films. And it is for this reason that the storyline is such a disappointment. 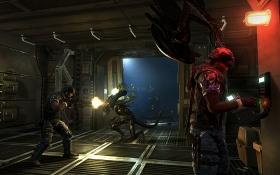 Whilst the game tags itself as squad based gameplay, it is played from a first person perspective. When humans are not taking the control of the other characters in the team, the AI handles it (and poorly). You really never feel that much you are part of a squad. Characters may appear on screen, but you can run off without penalty and they tend to just wait around for you rather than co-operate with you.

And in many ways this represents everything wrong with the game. Nice ideas, but just poorly executed. The majority of the game is played in corridors and small environments with it only opening up rarely. This leads to fairly boring combat and gameplay. When it comes to the aliens themselves they are perhaps the biggest disappointment in the game. Whilst in the aforementioned Aliens vs. Predator, the aliens were fast, scary characters, in Colonial Marines you can literally watch them walk up to you. The speed just isn't there.

There are more problems with the Aliens as well. First of all many times you are not actually fighting aliens and instead shooting at other enemies. For a game that tags itself for being about aliens, this seems incredibly stupid. People buy aliens games to shoot aliens and to experience the fear of these hulking creatures. And the other problem with the aliens is how they appear. The game seems to think that just dropping them in front of you out of nowhere is scary - it's not. Primarily because by that time you've seen the aliens many times and know how weak they are. A real shame.

These are scary characters, but in the game they are not. And their animations leave a lot to be desired. Rather than deform slowly or in a realistic fashion, animations seem to jilt as they perish and their blood appears rather than seeps on them. Like a texture is literally just smashed onto the character. It's all very rough.

The actual gameplay itself is monotonous and boring. Walk into an area shoot a bunch of aliens or other enemies and move on. Find a switch or item etc. In general many first person games can be boiled down to these basic mechanics, which is why the environment and atmosphere of the game needs to be top notch. In Aliens Colonial Marines it is far from it. 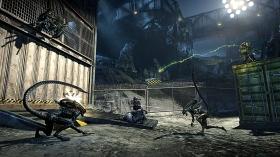 From a visual perspective the game is even more of a letdown. Bland textures, pop in and graphics so bad that I literally checked my Xbox was operating in 1080p still. This could have passed for an Xbox game, but not an Xbox 360 game. Considering we are coming to the end of this generation, we are just stunned that Gearbox allowed this game out the door looking like this. The other platforms are not as bad as the Xbox 360, but still not as good as they could be. The Xbox 360 version is an absolute mess in this regard. Voice acting is serviceable at best, but admittedly some of the alien effects and especially the motion scanner capture the sounds of the franchise well.

When it comes to the multiplayer the game improves somewhat, but again the problem of the aliens just not being quick enough is present. You play as either the Marines or Aliens in a versus mode that is either team based death match, a mode where you need to blow up alien eggs or defend them, or one where you have to prevent the marines escaping an alien infested base. Horde mode is also present, but is DLC and needs to be paid for, which is really disappointing. The game is generally unbalanced towards the marines with the aliens just moving too slowly to be any sort of threat most of the time.

Aliens Colonial Marines is a mess. There is no other word for it. Whilst the game is playable start to finish, it's boring, the graphics are terrible and the animations on the aliens and behaviour of them make them seem like friendly creatures instead of hulking terrors. It's hard to see what went wrong over the five year development schedule, but obviously a lot did and this is a game that even at bargain bin prices you should avoid. If it's five dollars on Steam? Sure, but only to see what a major disappointment this has turned out to be.