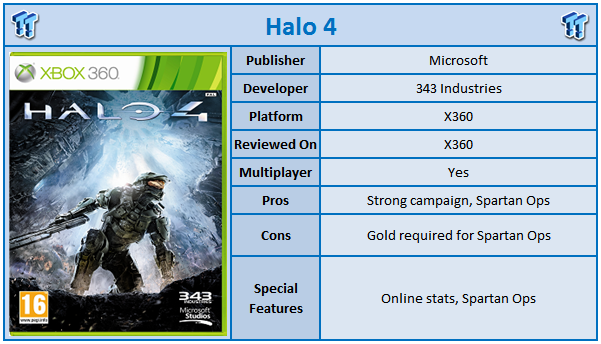 Perhaps the biggest compliment that I can pay to 343 Industries is that Halo 4 feels like a Halo game. Tasked with taking on the behemoth franchise that arguably singlehandedly made the original Xbox console a success, they have done what many thought impossible. Taken another developer's franchise and not only matched it, but in many ways improved upon the formula that Bungie relied upon for four games.

Five years since Halo 3, we return to the main storyline and Master Chief. It was clear from the outset that both 343 and Microsoft understood that this was going to be a major task and a major development. After all, they announced a brand new trilogy. So with the first of three games out of the way, does 343 Industries deliver? You bet they do.

Halo 4 picks up just under five years after the end of Halo 3. Master Chief is in Cryostasis when events conspire to require him to be unfrozen. The earth is under threat yet again with a new force, the previously revealed promethean force the main protagonist. There are two distinct sections to the campaign split by a major event that we won't spoil, but makes you want to push on to the end of the game. The campaign is incredibly well paced and interesting to play. It's also longer than most first person shooter games with our play through clocking in at about the eight hour mark. 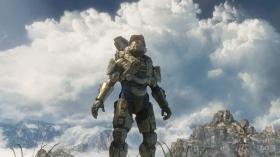 In terms of the gameplay Halo 4 is Halo, and that's the best thing we can say about it. If you are a major fan of Halo, and know all its nuances inside out, such as jumping and movement, you will be right back at home. Those six seconds of fun that Bungie discussed during the development is present here throughout, but there are a few areas which really mix up the gameplay.

One of the major changes is that you will take command of vehicles. Of course in the past you have had access to the warthog and it makes a return (although doesn't feature as prominently as you may think), but you also now have access to additional vehicles. Before the time the campaign is done you will pilot a MechWarrior style vehicle and a spaceship. These missions come at times where the gameplay can seem a bit repetitive and so mix up the campaign perfectly. Each campaign mission is also significantly long with most clocking in around the hour to hour and a half mark on normal difficulty - depending on how good you are at FPS games, of course.

Weaponry has also had an overhaul. Some of your favourites return such as the assault rifle, but along with the new enemies come new weaponry. The promethean based weaponry has a very organic feel. For example, if you pick up the pistol with promethean technology, as you load it, it clicks all together. The new weapons fit into the new world perfectly, and are generally all enjoyable to play. We found ourselves more often than not wanting to use the new weapons and not just because they were new, because they were the best. Halo 1 fans will be happy to know the pistol is back and just as overpowered as ever.

Many of the tropes which Bungie set in Halo 2 and 3 have returned for Halo 4. There are no medpacks, instead the game relies on a shield and 'strawberry jam' to inform the user they are being hit. There is also the ability to modify the game with skulls that you can find in the game such as the ever popular grunts birthday party as well as another which allows you to turn the HUD completely off including Master Chiefs arms.

The AI of the game is as frustrating as ever, but in a good way. The AI reacts to almost everything you do. Just as you start to get that clean shot lined up, they will move. And whilst Halo 4 throws everything but the kitchen sink at you, it never feels that the developers are using the number of enemies on the screen to boost the difficulty as opposed to AI smarts - especially when you play with legendary difficulty enabled.

Along with the rest of the game, the mission structure follows that of Halo of years past. Each mission is generally divided into sub-missions which means in one single level you can have some wildly varying things as objectives. The environments are also stunning and beautiful.

The mission that Microsoft showed during E3 in the jungle does not disappoint and is one of the most beautiful missions you will see on the Xbox 360 in 2012. Other locations in the game are just as detailed, and whilst the game is linear, there is quite a bit to explore.

Once the campaign is done you can then move onto the multiplayer component, especially Spartan Ops. Spartan Ops is Microsoft's way to try and stop people trading Halo 4 back to stores quickly, but to denigrate it as that is to completely undersell this fantastic feature. In Spartan Ops you play through some extra single player missions that have some storyline attached to them except you play as a regular Spartan soldier. Microsoft has promised to release more Spartan Ops missions via Live for no additional cost as well. These are all playable locally in co-op (like the campaign) as well. However, to access Spartan Ops, you do need an Xbox Live Gold account, which is our only problem with it, especially when you can play it alone in a single player format.

In terms of the returning multiplayer the usual suspects are back including some remakes of the more famous maps. You can customise the games how you want to play and with the Forge feature returning you can build your own maps. Another change is that you can now choose your load out which completely changes the game up. Each character will generally have a different load out leading to some very unique multiplayer situations. Think of Counter Strike and you are on the right track. So, for example, before each Spartan Ops match, you can choose your weaponry. As you level up your Spartan, you gain access to more weaponry.

As expected performance on Live was good, however it must be stressed that during the review phase, the servers were very under populated (as expected). Day one could be a different story, but we are sure that 343 Industries is ready to respond should anything problematic occur.

Visually the game is incredibly impressive. There are times in the game where it was hardly believable that this was running on current generation hardware. There are of course times where the graphics drop down (and they are dialled down in multiplayer), but overall the levels, animations and visual style come together very well. When you compare how Halo 4 looks compared to Halo 3, it's nothing short of incredible.

Not to dismiss Bungie's work too much, but again it's hard to believe the same system powers both games (albeit with a bit more development time and research behind it). Marty O'Donnell does not provide music for Halo 4 having chosen to stick with the Bungie crew on its new venture, but you would hardly know it. Halo 4's music is traditional Halo with building music as you reach sections of the campaign with a crescendo. Voice acting is serviceable, and there is some interesting random dialogue from some of the NPC characters throughout. Another trait of Halo.

You can tell right from the outset that 343 Industries knew what it was doing. You can also tell that the team has the utmost respect for Bungie and its work. Having chosen to not touch the way the Halo games played at all was a good move, but they didn't rest on its laurels either. Everything they have added to the series fits perfectly, and everything they have retained works well in the new world, too.

This is only the beginning of a brand new trilogy, but 343 Industries is off to a flying start. Halo 4 will be one of the best games of 2012... there is no doubt about that.