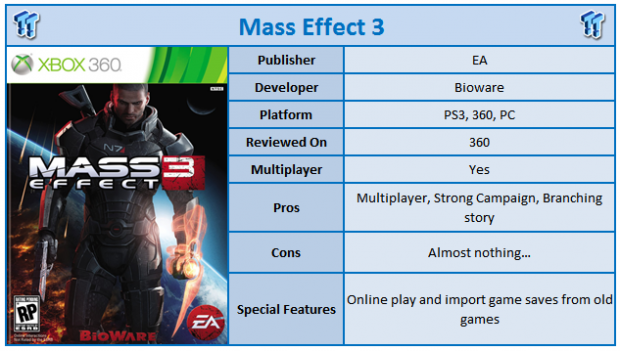 When it comes to anticipated games of 2012, not many can compare to Mass Effect 3. After two brilliant games, and an amazing story, BioWare left us on a massive cliffhanger with the last game, ensuring we were demanding more. However with this demand obviously comes responsibility. Could BioWare live up to the stunning second game or like another famous space opera, would it fail to light up the sky, so to speak, in its third iteration? Shepard is back and better than ever. What Mass Effect 3 proves is that BioWare is very aware of fan feedback and also how they can improve their games. In many ways Mass Effect 3 is a melding of the best bits from the first two games, with a few new features thrown in for good measure. That may make Mass Effect 3 sound derivative of the first two games, but that could not be further from the truth. Even away from the first two games Mass Effect 3 stands up on its own as one of the best games on the Xbox 360.

Mass Effect 3 picks up where the second game ends. Shepard has either destroyed the Collectors base or sided with the illusive man to end the collector threat. Shepard is no longer part of the alliance forces and instead free-lances around space, despite his/her fame. However with one galaxy turning moment, Earth is attacked by the reapers (the force first found in ME2) and from there it's up to Shepard to not only save Earth, but also to unite the galaxies many factions against its toughest opponent yet.

This is primarily what the story focuses on - gathering support from the various factions present throughout the galaxy. If this sounds somewhat familiar, you are right and we were concerned that ME3 was going to follow the same path as two. Gather forces, take on an enemy and win, but we were totally wrong. Without too many spoilers, ME3 spins a story of politics, war and how when the chips are down, once enemies become allies to fight threats. 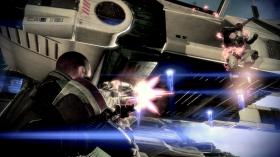 The story is one of the best aspects of ME3 and as with the first two games tough decisions need to be made by you as the player. Those decisions significantly affect the way the game plays out and whether you will be victorious or fail in the fight against the reapers. The decisions that you make in ME3 are some of the toughest yet. And BioWare has managed to craft these decisions so tightly that it is entirely possible they will emotionally affect you. After a tough decision which was for the good of the galaxy we felt sick to the stomach due to the result and how the cut scene played out. When a developer manages to tap into your emotional state, you know you have an amazing game on your hands and ME3 is just that.

As expected you are able to import your character from ME2 into ME3 and this can affect the game. There are various decisions from the previous two games that will affect how the game plays out. For example, if in ME2 you lost the majority of your squad in the end battle, Shepard will be a broken man/woman, wondering whether it's all worth it or not. Characters which have died in previous games will not appear in ME3 either however just because they were seen before, does not necessarily mean those who survived are present in ME3 either. For those who may not be happy with how the previous games played out (or let Shepard die in ME2), there is the option to start a new save game. However decisions still come into play. BioWare asks you a number of questions as to how you dealt with (or would have dealt with if you haven't played the games) the various scenarios that affect how the game plays out in ME3. This is a nice touch, but it would have been nice to see BioWare put even more effort into bringing players up to speed. There does seem to be quite an assumption that most people will have played through at least ME2.

Aside from the expected features, BioWare has also made some significant changes for ME3. Probably the most significant is the new 'game style' feature where you can choose between RPG, Action or Story. The game adjusts difficulty and story based on what you select. For example, if you choose action, instead of allowing you to choose chat options with the chat wheel, the game will just play cut scenes, but also beef up the difficulty of the enemies. Play the story mode and you will find the enemies to be a cake walk, allowing you to focus on the decisions Shepard is making in his/her quest to save the galaxy. It's an interesting move and it does work well. Many times we have heard developers lament that gamers do not finish the game. In this way BioWare has ensured that people can finish the game. If you get stuck somewhere, switch to Story based mode, wipe out the enemies, and then continue on. If you choose to.

However, the best way to play ME3 is the RPG mode. In this mode there are a lot of things you need to take care of such as how you will level up your characters, what armor you will wear and what decisions you will make. This mode as the name implies is the closest that ME3 comes to being a full blown RPG style game. There is also some other additions such as the weight factor. As you carry more weaponry, your weight increases, which can lead to energy recharging at a slower rate, for example. Unlike other games where they slow you down to a crawl if you are over encumbered, ME3 just gives other penalties. This is an interesting change to the series as well. BioWare has also placed weaponry upgrades into the game that you can find throughout the world or craft on the Normandy which allows you to customize your squad even further.

The game itself (the main story) takes around 10 hours to complete if you just blow through the game and ignore all the side missions and options. However, that is not the way to play ME3. ME3 is a game that can be enjoyed over many, many hours with side missions a plenty to complete, characters to romance and an entire universe to explore. You can still look for resources in the galaxy, but instead of having to land and find the resources, or scan planets, you instead send a pulse from the Normandy to try and find debris. If you do this too often, however, you can make yourself stuck in the sector you are in until a mission is complete as the reapers investigate what is going on in that sector.

Mass Effect 3 also introduces multiplayer to the series for the first time. There are a few positives from this such as the fact that it does not spoil any of the main story at all and so can be picked up at any time. And playing multiplayer improves your Galactic Readiness rating for the war as well. Multiplayer reminds us a lot of games such as Counterstrike where you play in a squad however it also is a horde mode. Enemies come in waves and the team has to work together to defeat them. As you play more you can upgrade your character as the characters are persistent, but does not use your main character from the story (else everyone would be Shepard!). Once an enemy defeats you, you move into a spectator mode until the end of the wave or all other enemies are defeated. The multiplayer is an interesting addition, especially with the ability to customize load outs and improve the character and does not detract from the game at all.

Although at first look the graphic prowess of ME3 is disappointing and some of the animations are not great, overall the game grows on you. The galaxy itself and the wide variety of planets are stunning to look at and the characters and their animations look good, especially the facial features. The game didn't miss a beat in terms of frame rate despite the high graphical detail, but one of the tradeoffs for this on the 360 is that the game ships on two discs. This can lead to you swapping the discs a lot (especially if you are tackling side missions) and that can be frustrating to say the least. The voice work is once again impressive and the cinematic soundtrack really brings home the story on screen. It is the music that controls your emotions sometimes with a dark, somber mood present throughout a lot of the game.

Mass Effect 3 is a stunning example of how to finish a multi-game story off. When BioWare announced the series and said they would do three games, people were doubtful they could pull it off. When they said it would happen within one console generation, it was seen as impossible, but BioWare has managed to pull it off. And not only have they delivered a trilogy of games, they have delivered a trilogy and story that will be talked by gamers for years and years to come. Mass Effect shows that if publishers are willing to take risks and take on new IP, it can pay off big time. We cannot tell you enough how much you need to play this game. There are a few slight things wrong with ME3, but when compared to the stunning story, gameplay and overall feel of the game, they pale into insignificance. BioWare take a bow - Mass Effect ends on a massive high. What we now need to wait and see is if EA and BioWare are strong enough to resist calls for a new game because based on the quality of this one, fans will be shouting for long and hard to return to the skies again. 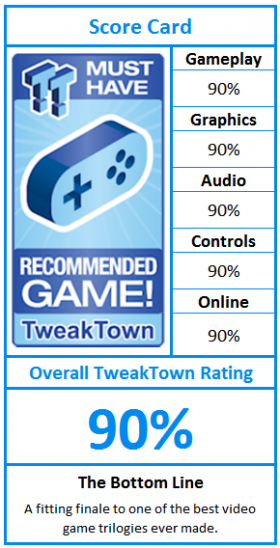