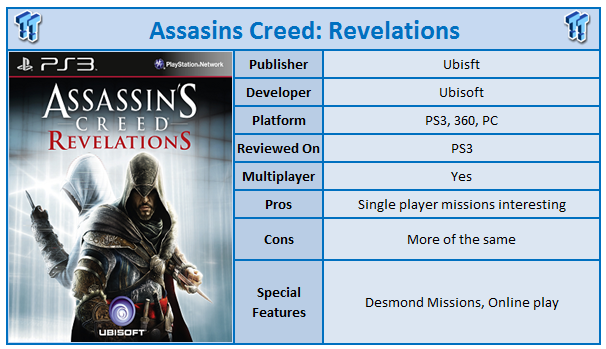 If you are anything like us, when Ubisoft announced that Ezio would return in Brotherhood we cynically felt it was a bit of a cash-in on the massively popular AC2. But we were wrong and Brotherhood remains one of the best games released in 2010. So you can imagine our mixed reactions when Ubisoft announced a third game in the Ezio series. Revelations returns us to Europe in the middle ages and to Ezio again, but unfortunately for Ubisoft, perhaps a third game was one too many.

Revelations picks up after Brotherhood ended. Ezio has travelled to the crossroads of the world, Istanbul/Constantinople in order to try and track down the discs that a certain other Assassin has left him to find in the battle against the Templars. And that really is all there is to it. Unlike the other AC games where there has been strong branching storylines, this one entirely focuses on the recovery of those discs, however there is a few new game features which whilst add a few more features to the box and game, don' feel like it necessarily improves the game.

The primary gameplay of Assasins Creed hasn't changed despite Ezio now aging significantly. He is still as nimble as ever and one of the easiest ways to avoid combat is to run across the roof of buildings. Of course, sometimes games need be liberal in the way they display realism, but we just can't see Ezio at that age being able to parkour as well as he does and it somewhat breaks the immersion. 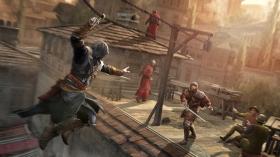 As you travel around Istanbul you pick up missions that need to be completed with the primary goal recovering these ancient discs. All the side missions you complete lead up to finding these discs which are hidden throughout Istanbul and once you trigger these missions, you start to see the best side of Revelations.

The hunt for the discs generally takes place under Istanbul in dangerous caverns and caves. In many ways these sections reminded us of a certain Nathan Drake and his adventures, but in a complete shock to us, it appears Ubisoft may have made a better 'Uncharted' game in these sections. They are the stand out point of the game and really make slugging through the other missions worthwhile.

The other section that makes this worthwhile is there are some flashbacks to Altair during his time. For those who don't know, Altair was the protagonist in the original game (and the full AC game is included on the PS3 disc). These sections are enjoyable to play and fill a lot of back story of just how Ezio and Altair are related.

But once you move past this and look at the other new additions, the feeling is not as great. There is a brand new tower defence mode where you have to place allies to stop the Templars taking over a den (or re-taking one for that matter). It is designed to ensure that the Templars can try and retake a den after you remove the captain and burn it down. This is to help Ezio be able to move more freely throughout Istanbul due to lower Templar numbers, but in reality you can ignore this entire section of the game as we did not find it hard to finish the game without too much difficulty.

The other missions throughout the game are your stock standard assassin missions; find something, help someone out that have been seen in the previous games.

However, the gameplay remains so strong that the fact you have played this all before almost goes out the window. It's a credit to the Ubisoft team that they have managed to make a third game, not change too much and it still feels gameplay wise as good as ever. One interesting addition is the ability to craft bombs with different ingredients from the world and having different desired effects.

We all thought that this might be the year Desmond pops out of his slumber and becomes the assassin he has always wanted to be, but that was not to be. Desmond features heavily in the main story in that his mind is broken and he needs to put the fragments of Ezio and Altair together before he goes completely insane. However, the Desmond gameplay parts are significantly different to what we have seen before and remind us a lot of Mirrors Edge. Desmond has a lot of his background filled in through these sequences, but they have to be unlocked via finding data fragments in the world which means not everyone will see them.

The world itself remains impressive as expected and when standing on top of the tallest point of the cityscape you really can see the epic size of the city. However, unlike previous AC games you generally do not visit multiple cities with the main game focusing on a few key areas. This allows the gameplay to feel tighter, but the flipside is that you can become 'bored' of Istanbul and what it has to offer. Some of the previously mentioned Uncharted style action sequences make up for this.

Assassins Creed Revelations is an interesting game to review. We can recognise that the additions to the game are not that great and don't add too much to the story and we can recognise that overall the story is not very strong, but we still say that it's worth playing. The underground sequences are spectacular to say the least and overall it still is a fluid playing, strong action game. Just don't expect it to blow your mind like the first two did.