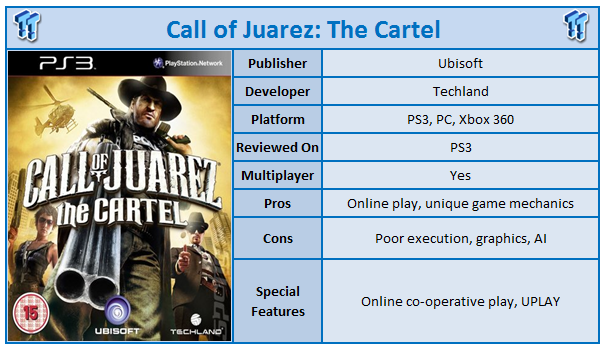 Call of Juarez in many ways was before its time. It took the player into the old west (now made popular again by the stellar Red Dead Redemption from Rockstar) and mirrored many of the great westerns we have seen from Hollywood over the years. Techland had the makings of a good game, but technical issues and overall style of the game needed improvement which occurred with the second title. For the third, for some reason they felt it necessary to move to modern times and the result in general is not good. We had a feeling that the series wouldn't translate well to modern times, and we were right. However, the reason why shocked even us.

Call of Juarez: The Cartel as mentioned previously is set in modern day Los Angeles. Drugs and crime are rife and Mexican drug cartels are trying to cross the border and trade their wares within the American borders. As you might imagine, American politicians won't stand for it and put together an interagency team from the FBI, DEA and LAPD to try and uncover the head honchos of the drug cartel and take them down. But as you would expect, the three do not get along. 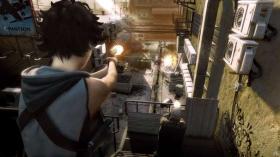 Going along with the team theme again, you choose to play as one of the three characters and this is where the first indicator appears that the single player was not necessarily the focus of the game. Before each mission you can choose a different character, but then before the mission begins you are taken to a lobby. In this lobby you choose your load out (which improves as you finish missions and gain levels) and whether you want to play online with two other human team mates or along with the AI. Generally for the best experience, you want to play online, because as we will detail later, the AI leaves a lot to be desired.

Once you enter the gameplay itself there are some features which are actually good, but then there is also a lot of generic feel to the game which is where it lets us down. Let's start with the good. The game features (and only when played online) an interesting side quest along with the usual story. Each of the three characters has an ulterior motive to being involved in each mission, whether it be bugging a phone, or picking up wallets to gain more money. Nothing unusual there. However, to succeed you need to make sure none of the other players are watching you do it. If you do this, then you will level up and unlock more equipment to use.

This mixes the gameplay up a lot and in a way as you play online it makes you wonder when you can trust your team mates. If you have not played through the game with all three characters, it is almost impossible to know at which points the ulterior motive objectives are placed, so you are often following your team mates on wild goose chases to see if they are up to no good. If you do catch them, you gain points and level up and so it's a very interesting mechanic. It's a shame this has not been included when playing offline.

However, in many ways this is where the good of the game ends. It is a generic shooter where you move from A to B taking out seemingly unending numbers of enemies and where the variety of objectives is minimal. Generally you will find it just a rush to the end of each mission. But there is something that keeps you coming back for more, and this is where the real surprise is found.

The storyline is presented incredibly well and is quite interesting. Lengthy cut scenes portray the storyline playing out in the game and the tangled web of the three characters and how that plays out is also incredibly interesting to watch. Basically, the best way to enjoy this game is watch the cut scenes one after the other. In a game which is so generic for the storyline to be such quality is surprising. What is a shame, though, is that the developers felt it was necessary for the characters to cuss every five seconds.

Now, back to the bad. The AI. When you play offline you have two AI team mates to help you out, but help is a word I wouldn't really use with this group of bumbling characters. Regularly you will run through a level only for your two team mates to appear in front of you as they need to catch up. It is a better solution than having people get stuck behind walls etc, but it just reeks of laziness for them to automatically appear near you. Also, when playing in single player mode on the PS3, every so often when we shot a character the game would freeze for a second. We are running on a fairly new system so are puzzled as to what caused that. A quick look online has shown us that we are not alone with complaints on the Ubisoft forum appearing.

Whilst the game is set in modern times, throughout you will venture back to the town of Juarez, where the first two games were primarily set. In fact, most of the game plays out in the desert rather than suburbia which given the gritty edge the developers have tried to convey to the player, is also a somewhat puzzling decision. That said, all the missions are incredibly linear and despite having more than most first person games these days (15), you should be able to finish it in around seven to eight hours. This despite the fact many of the deaths you will encounter come from stray bullets of enemies that are hard to see off screen.

Visually the game is also disappointing. Again, despite the change of scenery, the graphics really are not that impressive. In fact, when the game first booted the menu, I found myself checking the PS3 settings to ensure I had not accidentally switched HD off. It does seem intentionally like that, but it left a poor first impression.

Moving into the game itself, the enemies are very generic as are the environments. They are adequate, there is nothing really bad about them, but nothing that really sticks out and makes you think wow. Voice acting in the game is also incredibly rigid and as mentioned before, the characters cuss a lot and try to seem a lot more edgy than they need to be.

Call of Juarez: The Cartel is a major disappointment. Techland had something interesting and unique with the original two games that they could have built on. Instead they have decided to try and make a modern reimagining of the title and in many ways failed. The real shame is that the game does have an incredibly interesting feature with the ulterior motives, but it's such a shame the rest of the execution has not backed up this unique feature to make this a more enticing game to play. Bargain bin at best.