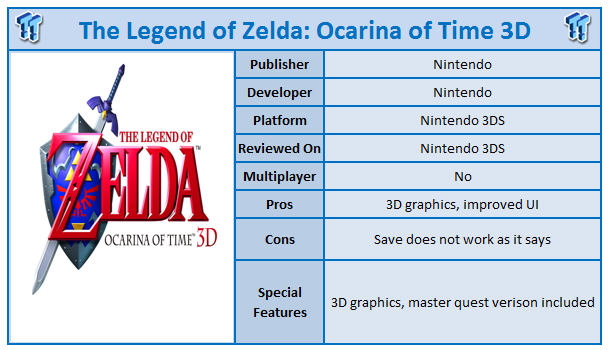 When Nintendo launched the first Zelda on its Nintendo 64 system, little did they know the impact the game would have on the gaming world as a whole. Often referred to as one of the greatest games of all time and the best Zelda game ever made, the team at Nintendo hit gaming gold in 1998. Now, over 12 years later the game has returned, and on a different format to wow another generation of gamers and give those who loved the game back in the day a chance to play through it yet again with both updated graphics and also on the move.

Ocarina of Time begins with Link meeting Princess Zelda and discovering that it is his destiny to save the land of Hyrule from Ganondorf, a member of the kingdom who Zelda does not trust. You begin with a dream, foretelling an event in the game that will change the land of Hyrule forever and you as both child and adult link, must work to reverse the decay that Hyrule has fallen into.

Ocarina of Time is very much a typical RPG game as you would expect. As you progress through the game you can improve Link's health and weaponry enabling you to venture further and deeper into the story without issue. The key feature of Zelda, the dungeons, feature prominently in the game and offer some of the most interesting, but also most frustrating aspects of the storyline. The game plays out basically along these lines. Visit a town and kit Link out, tackle a dungeon solving numerous puzzles and defeating a boss. There are a few points where the game deviates from this structure, but it's not very often. 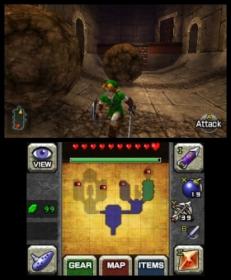 Where Ocarina of Time shines in comparison to many other RPG games, is the combat and structure. On the surface, the game has a very basic combat system. However, that is a by product of good game design rather than the game having a lack of challenge. At any time you can use the L shoulder button to target an enemy, and the face buttons are used to hack an enemy with Link's sword or use one of many items that Link can pick up and use as weapons throughout the game. As well as this, the Ocarina mixes things up where you can play songs in various parts in the game to change the world, or gain new items.

And it is here where one of the first major changes for the 3DS system comes into play. The inventory management system is significantly improved since the original game and is controlled by the touch screen. Choosing items is a simple as tapping on the item when it's shown on the lower screen. If you want to use the item in combat, you can map that item to the face button, very much like the original game. Not having the items displayed on the above screen gives the game more real estate to display the game world, and the lack of HUD items really improves the look and feel of the game.

The other changes to the game for the 3DS are a little more superficial and more representive of the casual nature of gaming these days. First of all, Ocarina of Time has a superguide of sorts. However, it is different to that which has been seen in New Super Mario Brothers Wii and Donkey Kong Country Returns. Instead of the game actually taking over control and finishing a level or boss fight for you, it plays videos on how a boss is beaten or how you might solve puzzles (especially that very annoying water temple). If you don't want to view them, you don't have to, but they are a nice touch for those who get stuck.

There are a few things that are a bit disappointing with the port and it does make us wonder if the developers have truly thought about how to completely handle a portable version. First of all, whenever you load a save you do not start back where you were. Given the portable nature of the game, this is a very big disappointment and really stops you being able to play for a short time, save and pick it up again later quickly.

Yes, you may argue the system can be closed and suspended, but when the battery life is so poor on the 3DS, this is more of an issue. The other thing that makes us wonder is the gyroscope feature. It does improve the game somewhat in that you can use the movement of the console instead of the analogue nub to move around when in first person view, but with the 3D completely turned on, it can become a blurry mess. Although we have to admit, not as often as we expected.

As you might expect, one of the major improvements for the game is the visuals. The smaller size screen of the system and the 3D effects combine to make one very pretty game. The 3D effect is striking and gives the game a new lease on life. Many of the famous scenes from the game play out in a much more beautiful manner and the graphics and animations have been given a slight overhaul as well. The music, however, has not changed. A key part of the game, the Ocarina is still as enjoyable as ever to play and listen to and the overall soundtrack will get stuck in your head as time wears on.

Nintendo took a risk with this one. The game is seen as one of the greatest ever made and to remake it for a new system could have been fraught with danger. Instead it is a triumph and the remake breathes new life into the game. Even if you've played it before on the N64, but have a 3DS, it's worth picking it up and visiting the land of Hyrule again. You will not be disappointed.