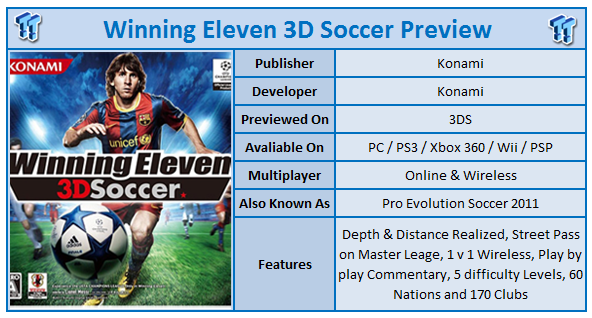 No matter your sporting persuasion, it's hard to deny that Football/Soccer is the world's most popular sport. Offering players the chance to earn millions per year, there really is something special about the sport where you kick a ball into a goal. And for years we have seen many video game developers try and build that sport into a successful game.

Recently two heavyweights have fought for the title; FIFA and Pro Evolution Soccer. With the 3DS around the corner it was natural that someone would try and get a football game ready, and they have. Winning Eleven 3D soccer is the 3DS Pro Evolution game and we took the final Japanese version for a spin.

The first thing that is apparent is the improvement of the interface when compared to the Nintendo DS versions of the game. As well as this, nothing has been left out from the console versions, meaning that you are getting one very meaty game if you pick this up on launch. This includes all the major licences such as the UEFA Champions League from the console big boys as well. 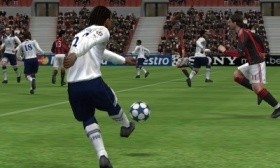 The first two things you will notice is the 3D featured in the game as well as the incredible gameplay. One of the most popular features of the console Pro Evolution Soccer games is that the animations are so crisp and clean and the developers have managed to convey this over to the 3D version of the game as well. Players react to the ball as if they would in real life and having skilful players dribble and play with the ball is a better tactic than just shooting over and over again.


The improved controls of the 3DS system become very apparent as well and the addition of the analogue stick is perfect for Pro Evolution Soccer. The movement is a lot more crisp and you feel like you have a much more direct control of the players when comparing to previous PES games on the Nintendo DS and having to struggle with the DPAD.

Of course, the game ships in 3D and there is no doubt when it clicks (that is, when you get the system the correct distance from your eyes) that it looks absolutely stunning. The 3D gives the field and players a layer of depth as expected, but to watch a replay of a stunning goal in 3D really does take the game to the next level.

However, the 3D is not without its problems from what we can see and it will take some time to adjust. Football is a game that traditionally is played at a very fast speed and the best teams in the world react on fast counterattacks to score quick goals. This is represented well in the game, but the 3D struggles to keep up.

We found the screen blurring a bit, or not really keeping up with the 3D as much as we would like, and this game when compared to for example Street Fighter IV, does occasionally have some real issues with the 3D implementation. However, that said, once you look past this the graphics and detail of the players is nothing short of amazing for a portable handheld.

Of course, we have seen PES on the PSP in the past, but we would go as far as saying based on the Japanese import that the game plays a much better game on the 3DS, even without the spiffy addition of 3D.

Winning Eleven 3D Soccer fills the void that many fans will want filled on the day of the 3DS launch. The 3D implementation has been done well despite the fact it may take some time to adjust for gamers and the gameplay is that traditional PES style we've all come to expect from Seabass and his team. Based on the Japanese import, Winning Eleven 3D Soccer (otherwise known as Pro Evolution 3D Soccer) is most definitely a game football fans need to look at come the 3DS launch.