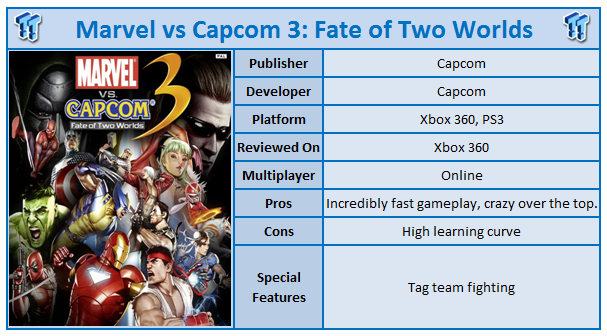 The Marvel vs. Capcom series is widely lauded as one of, if not the best fighting game series around, and it's not hard to see why. Offering familiar characters from some of the most famous Marvel comics as well as the most intense and over the top fighting action in the gaming world today, it has defined itself as a niche product in what many already consider a niche genre. So when Capcom decided that it was time for the third iteration, we were interested, especially after the smash hit Street Fighter IV. And it looks like it has been worth the decade or so wait since the last game with Marvel vs. Capcom 3 offering intense fighting action, whilst offering some new options for novice gamers.

It may seem puzzling that the Marvel and Capcom characters have decided to kick the living daylights out of each other, but in reality it's just a contest of strength; that is until the earth comes under attack from an unknown force and they must bind together to take it down. As you might expect, the story really isn't anything to write home about, but really it never had to be with emphasis being put where it matters; in the controls and gameplay.

Marvel vs. Capcom 3 retains the unique style of the previous two games. That is, you build a team of three Marvel or Capcom (or a mix) characters together and take on progressively more difficult teams of opponents. With that in mind, there is obviously more combinations possible in the game than most, if not all gamers could ever become familiar with. For example, pairing Ryu with Hulk is significantly different in strategy and gameplay to pairing Ryu with Ironman. The reason is because the characters can be tagged in and out at any time. 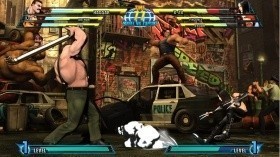 The tag system is what makes the game so unique. Offering you the ability to tag in any of the other two characters in your roster at any time, it also allows you to combine characters special moves. If you are starting to get lost and thinking that this is one of the most complex games around, then you would be right. To get very good at this game it takes dedication and not many gamers have the time to do that, which is a shame. The game also allows you to save which characters you choose as a default three for ease of setup.

It is entirely possible when fighting someone very good to never have a chance to get a hit in, because of the juggle system which has been retained. This allows players to 'juggle' their opponent with special moves in the air, building up 40, 50, 60+ move sets that will just take anyone down. However, the developers have realised that their game is hard and have done something to help novice players around this time.

Marvel vs. Capcom 3 like Tatsunoko vs. Capcom on the Wii last year includes an easy control mode. This reduces the control system to three buttons and allows you to pull off special moves with a single button press. This evens up the fight between an M vs. C veteran versus someone who is new to the game, and it actually is a welcome addition to the series.

However, other than this, the game is found lacking. It includes a mission mode which is basically reduced to performing a special move a number of times, and whilst this helps with training, it's not exactly fun to play which is a real shame.

The fact there is only one real mode in the game does let it down significantly with the only real draw back to the game other then the brilliant gameplay being unlocking new artwork to look at. Obviously this is something only for the true Marvel fan.

Visually is where the game really shines. The cartoon nature of the Marvel characters suits the engine that the developers have used (MT Framework) well, plus the game doesn't really hiccup even with some of the craziest fighting action you will ever see. The special moves take over the screen and over time that can become a bit repetitive, but there is no doubt the visuals are where this game really shines.

Multiplayer online has also been frustrating. You may experience something different, but we have found it very hard to find games online on the Xbox 360. It's not that the games do not exist; it's that the network communications are having a very hard time of it. This is due to demand we think, but the fact that only about one in five games are connecting successfully is a real issue at the time of writing.

Marvel vs. Capcom 3 is a game of two halves. It is absolutely brilliant, but it's also one of the most technical and difficult games around. Those who put the time in will find a deep fighting system with many intricacies and incredibly fast gameplay.

Thankfully the developers have realised this is not everyone's cup of tea and put the easy mode in for novices to get used to the action. We can't recommend this to everyone due to the intense nature of the fighting and difficult gameplay, but for fans of fighting games this is most definitely a must play.