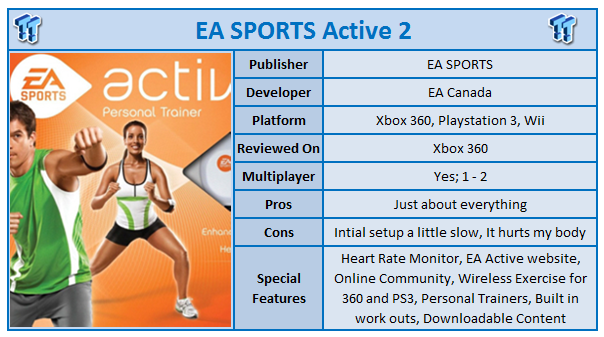 As I sit here in a pile of sweat after doing a 27 minute workout in EAs new Active 2, I find myself trying to find any excuse not to get up and shower for the simple reason that it's just too difficult at the moment. So what I've instead chosen to do is write this review on it.

Active 2 was the game that had my attention from the second I saw it. Wii Fit as a fitness game was stupid. I would've been better off dancing to Olivia Newton Johns 'Let's Get Physical'. Active 2, though, gave me the impression of what Kinect could really be suited to. Sure, it's great having exercise machines you can buy off the TV for $99.99 that can fold under your bed, but what motivates you to pull it out from under your bed the next day?

Wii Fit was the same kind of thing. With no real goal being set, what was the motivation to get up and try and do something? Self-motivation you say? Yeah, well, that's not enough for most people; plus you didn't come off Wii Fit feeling like you'd really done any exercise.

Active 2 brings everything you want together; the ease of working out in your own home, the benefit of doing it when you're able to, and the social networking experience of the Active 2 website to help keep you motivated.

Firing up Active 2, you get a bit of an introduction on what it's about and then you're told how to set up the included heart rate monitor. On the topic of the heart rate monitor which comes bundled inside, we've also got a resistance band which is to be used with certain exercises. 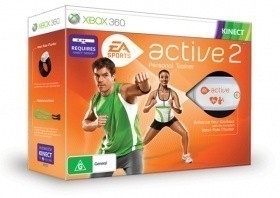 This is the first feeling you get that Active 2 is a bit more serious than the competition. With the heart rate monitor setup and your account logged and character designed in, it's here you now select the kind of workout you want. Realistically, we've got six options broken down into two sections; one a three week program and the other a nine week. Both have three options inside, consisting of easy, medium or hard.

I've opted for the 3 week 20 days Cardio workout on Hard, which offered more reps and more intensive exercises. I'm not sure why I picked Hard over Easy or Medium; I'm hardly going to run a marathon and to be honest, walking to the fridge is hard enough. I'm a man, though, and that's what men do I suppose. I also chose the male trainer because he sounded tougher; the female one sounded a bit airy fairy with her yoga and I wanted to feel the burn. 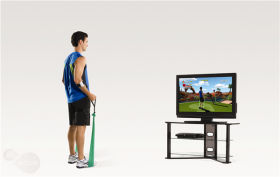 With your workout program selected you then select the days you want to work out. For the program we're prompted with four workout days and three rest ones. I tried to select more, but it was a no go. Originally it was set up as Wednesday, Saturday and Sunday being my rest days, but since it was Wednesday when I started playing it, I made Monday my third rest day instead.

Once all that's done it's finally time to get into the first workout and while I initially found myself frustrated with the amount of time it took to setup, when I began to complete the exercises I started wishing the setup time took longer.

Initially we start off with some stretches to loosen the body up. I just came off playing some Need for Speed Hot Pursuit, though, and thought I didn't really need this; my thumbs are in perfect working order! That aside, I proceeded to wave my arms around and gyrate my hips so that I was ready for my work out session.

Across the 26 activities you're doing everything from squats to jumps to kicks, and more. At the beginning of each exercise there's a quick tutorial video; most of the time it's not really needed as the exercise is fairly easy to grasp. I don't need someone to tell me how to squat, but as the exercises went on, these made for great breaks! 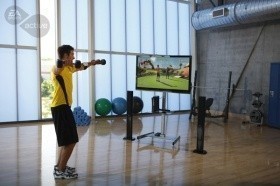 With your heart rate monitor on and your warm ups completed, you begin to really get into some exercises. I once watched a movie called White Men Can't Jump;. I think I have to send a copy to EA, because jumping back and forth 30 odd times is killer on the body and while I can jump, I'm pretty sure my body wasn't designed to.


The thing is, as I start to do these exercises, I start to feel the workout in my body, be it my thighs from squats or my whole body from running around the circuit with my trainer. The sweat starts to run down your face and you see your heart rate go up as the intensity is lifted. Initially I found myself a little sceptical of the heart rate monitor, probably a bit like the Wii Fit board, but as my heart rate rose from 95 BPM (Zone 1 Smart Start Zone) to 155 BPM (Zone 4 Performance Plus) I knew it was working, because I'm sure I was on the brink of death.

On the topic of Zones; there's five, and the higher level zone you're in, the more of a workout you're getting, and of course the more calories you're burning. And while I only just jumped into Zone 5 here and there, you're never in it for long as the intensity at this level is so high that it can generally only be held for a few seconds.

Once you've progressed through a majority of your exercises you come to the end and you begin to warm down. There's no tracking here and instead you're just following what the trainer is doing. You feel a real accomplishment after completing your first workout and those achievements show up.

As good as all this is, though, the thing that makes EA Active 2 something that will last is the EA Active website. EA has brought us this kind of social networking experience. What the EA Active website does is essentially open you up to thousands of Gym buddies that can help keep you get motivated via workout groups. Here you can also track calories burned, time spent working out, check when you're supposed to be working out next and more. 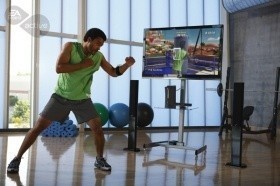 EA Actives website is the Gym without the intimidation, without the guys lifting 200lbs weights and women with bikini bodies. You don't have to show your face, weight, size and height. You can just show your calories burnt and how much you're working out; the things that matter.

Active 2 isn't really a game, but it makes working out fun. Outside of typical stuff like doing squats, you can kick soccer balls which work your leg muscles or ride a mountain bike which consists of you holding squats, jumping and running on the spot. You can play your own music as loud as you want; you can sit down for five minutes and know that you're not being judged. EA Active 2 is all about you, and you getting healthy.

EA has set the benchmark for what a fitness game should be, and with Downloadable Content being shown in the main menu and the fact it's EA who tries to milk as much money out of DLC as anyone, there's going to be more workouts that you can download, helping keep everything fresh.

Active 2 is fantastic and I think for anyone who is really interested in doing something about their weight or fitness, it's a must buy at $99.99. Available on Wii and PlayStation 3, with the PlayStation 3 version touted as being completely wireless, but not the Wii one, you have to wonder how well they will work.

For PS3 users it seems that along with the heart rate monitor two other sensors need to be used; one on the thigh and one on the other arm; and for Wii users, footage shows the same sensors and the Wiimote being used. There's no denying that for the most effective workout, the 360 version with Kinect is going to be your best option, because you're going to be up and running quicker.

Active 2 is not without its flaws. Like other Kinect games the detection of you can be a little stupid at times and for some reason I kept pausing mid-way through some exercises, but there's no doubt we'll see these minor bugs sorted as time goes on.

Active 2 does what no console or computer has ever really done before, and that is make you feel the burn when "gaming". This is a serious "game" that is going to have real benefits. If you want to pay $99.99 and try and cheat your way through workouts some way, that's fine, but you're only cheating yourself. If you really want to continue to live a healthy life or start to live one, Active 2 is a fantastic first step. Combined with some nutrition know how, you'll be feeling fantastic in no time.

Keep an eye out in the coming months for another look at Active 2 to see just how it's looking as we work more with it and discover upcoming DLC.