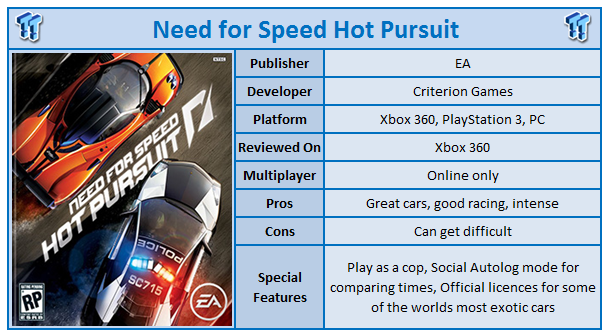 For years many people have believed that the Need for Speed series was going downhill. What was once a must buy series has become a wait and see franchise whenever it releases a new game. EA appears to have recognised this trend and has started to take steps to rectify it. The first indication of this was the significantly different Need for Speed Shift last year that was built to take on games such as Gran Turismo. However, in 2010 we have a completely different game again; one which heralds back to the days where Need for Speed was THE racing series, and this is a good thing.

Need for Speed Hot Pursuit as the name implies returns the series to the cops versus phelons gameplay that made some of the last generation games so popular. It's one thing to race hot and exotic cars together, but add the law enforcement aspect and the game becomes all the more thrilling and enjoyable to play. The best way to describe Need for Speed Hot Pursuit is a game of two halves; the cops and the phelons.

Criterion Games is the developer behind this latest game and considering their pedigree in Burnout, it is of no surprise to us that the game focuses on speed and thrilling chases. At any point in the game you can choose to take on a law enforcement mission or try and outrun the cops with the level of your police and phelon character stored individually. It is entirely possible to 'finish' the police side of the game before even taking a spin on the other side of the law and it is this flexibility that makes the game so approachable. If you get stuck on a race, just try another one. 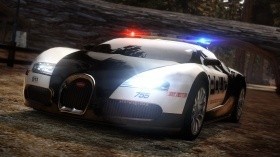 The progression is modelled very much in the same way as Burnout Paradise. At any time a number of races are present on the screen for you to choose from and you win either a gold, silver or bronze medal in each race depending on how you perform. Aside from, this game also introduces a bounty system where you win points for taking out cops, taking down an opponent or just driving well. This bounty is used to unlock new cars and equipment and is used to determine your career progression and level.

The racing itself is fast, very fast. Initially the cars you get access to handle like boxes, but after a few hours once you have unlocked some of the exotics the game starts to come into its own and you will be drifting and throwing that car around corners like a professional. The racing when the police are involved is in a word, mayhem. Not only do you have to worry about beating your opponents, but you are constantly being harassed by the police in numerous ways; spike strips, helicopter chases and even EMP blasts which can render your car useless in an instant.

However, this is where the main problem with the game starts to rear its head. It has rubber band AI. For those who don't know what that means, basically, no matter how well you drive and how often the AI crashes, they will always be behind you. We can understand why EA did this; they wanted thrilling racing all the time, but the first time you lose a race due to a last corner crash, you will want to smash your controller into many little bits, especially considering the length of some of the races.

The tracks in Need for Speed Hot Pursuit are not circuits; instead they are point to point races in the fictional Seacreast County. This once again is a tribute to the way Need for Speed was built in its early days and works well.


The tracks do feature shortcuts, although not all of them are good with some taking you on the long way around. Unfortunately you have to learn which ones are the hard way.

Visually the game is a bit of a mixed bag. When compared to some of the blockbuster titles of this generation, it doesn't compare, however the cars do look quite good given the speed and framerate of the title (which doesn't baulk even with crazy amounts of action on screen).

The cars will take damage, but most of it is cosmetic. However, if you do decide to trash your car the game will end and you will fail, so damage is not entirely something you can ignore.

EA has included something called Autolog which is a fancy way of saying friend leaderboards. Every time you start a race, if someone on your friends list has set a time, it will tell you what the best time was and you can attempt to beat it. If you do so you can even send a message to your friend with some smack talk attached.

On paper it doesn't sound that interesting, but it has the 'Geometry wars' effect of continuously trying to get faster than each other. As well as this, online racing against each other is available and offers matchmaking.

Need for Speed was a franchise in trouble. Whilst Need for Speed Shift did do some things differently, it had a lot of problems. EA potentially had the perfect solution right under their nose with the Burnout developers and there is no doubt some of that Burnout magic has been put into this title.

Need for Speed Hot Pursuit returns the series to its roots and is the best Need for Speed release for this generation of consoles. Grab your keys and get ready to race.