All NewsBusiness, Financial & LegalCases, Cooling & PSUContests & GiveawaysCPU, APU & ChipsetsDealsDisplays & ProjectorsGamingMotherboardsScience, Space, Health & RoboticsStorageVideo Cards & GPUsVirtual & Augmented Reality
All ReviewsAll ArticlesAudio, Sound & SpeakersCases, Cooling & PSUCPUs, Chipsets & SoCsComputer SystemsDisplays & ProjectorsGamingMotherboardsNetworkingPeripheralsRAMStorageVideo Cards & GPUs
GuidesGamingAsk the ExpertsNewsletterAboutPrivacyForums
AMD Zen 4Intel ArcBattlefield 2042RTX 3090 TiRTX 4090RTX 4080GTA 6Elon MuskHDMI 2.1
In recent interviews Kevin Levine has stated that Bioshock was never meant to be the success it was. Speaking from past games he had developed which were critically acclaimed but never sold well, he expected Bioshock to suffer the same fate. In fact, the whole team did. So, the fact that Bioshock made it big is all the more astounding.

Bioshock was one of the best games released in the early life of the Xbox 360 and remains today one of the most outstanding first person action games on the system. So did we really need Bioshock 2? When the game was announced there were fears that it was a cash-in and the universe didn't support it. Having played the game now, it is clear that the Bioshock universe can go far beyond what we ever imagined.

Bioshock 2 casts you in the role of one of the first games enemies, the big daddy. This change while unexpected, does manage to shake the game up enough to want you salivating for more. You as a big daddy have been accused by the dictator of Rapture, Lamb, of taking her daughter and turning her into a little sister. The game plays out by you trying to rescue Eleanor, your little sister and convincing Lamb that you were completely setup. Of course, the game has many twists, turns and characters and by the end you will once again be wondering if you have been played, just like the first game. 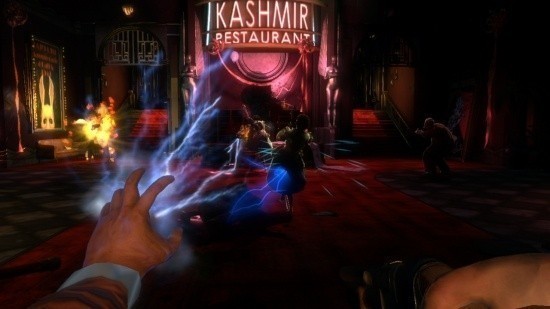 The change to a big daddy brings with it a lot of new mechanics and interesting features to the series. First of all, you can wander the levels while passing big daddies without fear, as they will not shoot until you do. However, in replacement of big daddies come the big sisters. Created by Lamb, the big sisters job is to ensure that Rapture remains a peaceful place without crime and war and to protect Lamb in her lofty ivory tower. As you might expect, they offer one of the biggest challenges in the game and while the fights with the big daddies in the original game were quite slow and cumbersome, the big sisters are very nimble and as such a completely different strategy must be employed.

Other than that, Rapture remains a lot like the last time we saw it. In fact, for the first few hours you may wonder if this could have been better named as Bioshock 1.5 or a total conversion mod for the original game. You still have your radios, you still have the mysterious characters and the art used in the game is very reminiscent of the first. To be fair, we expected nothing less with Bioshock heavily praised for its art-deco style, but until you get into the meat of the game, a few hours in you will wonder if the wait has been worth it. The fact is, the game does not have a mind blowing, awesome introduction and you really have to push forward to find the best bits towards the end. 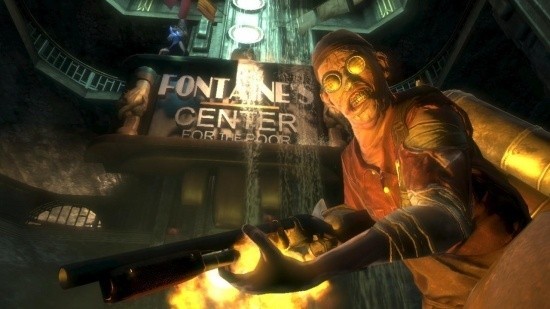 As you would expect, the weaponry and plasmids return allowing for the unique gameplay which made the original so popular, but with the change to big daddy status comes other changes. First of all, as you run around the levels you can either discover orphaned little sisters or kill a big daddy and take his. The little sisters are just as important as the first game where they once again are responsible for harvesting a liquid which lets you buy plasmids during various points in the game. You can also choose to save or harvest the girls themselves which brings back the good/bad choices of the game.

Those choices seem to have been expanded to the main story as well. At one point you have the choice to either kill a character who has been trying to beat you down with a number of enemies, or leave her alone and save her. Depending on what you do has a significant impact on how the next section of the game plays out and whether you are going to have a real tough time of it, or be able to waltz through right to the next section. 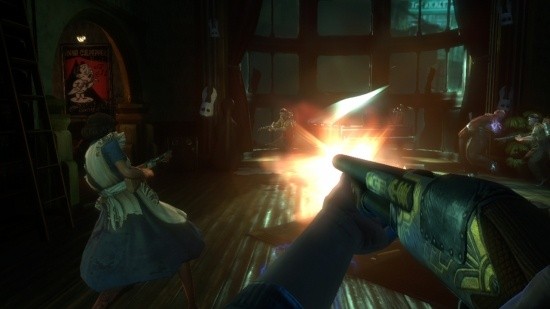 Rapture itself hasn't changed so much as mentioned before, but the structure of the game has. Despite the game warning you that this is the case, it still remains a disappointment that once you have left one area of Rapture in the game, you can not return until a second play through. Considering this is in stark contrast to the first game and also makes the game a lot more linear, this definitely goes into the bad decision column for the second game. It does make the game easier to finish and figure out what is going on, but those coming from the first game will likely be disappointed.

However, one thing which has changed for the better is the AI. If you don't finish them off and there is a medical bay nearby, they will use it. They are smart and offer a significant challenge, especially on the higher difficulty levels. Bioshock 2 is not a walk in the park and we found ourselves being toasted more often than not. However, it is shorter than the first game and you can complete it in around seven to eight hours if you power through it. We don't recommend that as there is a lot to discover in this new world of Rapture.

The game does not have the same impact visually or atmospherically as the first game. This was always going to be the case. Rapture was such a breath of fresh air during the time of its release and something so different to what was around that it was going to be near impossible to replicate that the second time around and as much as the artists and developers have tried to do so, it doesn't have the visual impact. That's not to say the game looks bad, it doesn't and the change to the big daddy perspective has been done well, but in many ways we've seen this all before in the original game.

One major addition to the series is multiplayer which remains one of the more controversial additions. Did the multiplayer impact the single player development? The answer is most likely no, as 2K Marin outsourced it to Digital Extremes who are known for producing excellent multiplayer experiences with the unreal engine. Bioshock 2 continues the tradition of leveling up to gain more weapons and plasmids and thus rewards people who play the game a lot. Plasmids offer something new to try and different combinations can be used, thus Bioshock 2 is one of the more unique offerings in the multiplayer landscape today.

Bioshock 2 was always going to have problems living up to the first. You weren't quite ever going to feel the same as you did when Rapture was first introduced, but the developers have taken risks and tried something new and for the most part it's paid off. The multiplayer is a welcome addition and the complete change-up of game play from taking the perspective of the big daddy makes Bioshock 2 one to look out for. Just don't expect the same atmospheric impact as the original.