Is the CyberPower GXiVR8060A8 gaming PC good enough for high-quality graphics and no lag?

Sure! Lets first pull up the GXiVR8060A8 from CyberPower to see what the specifications are and go from there. 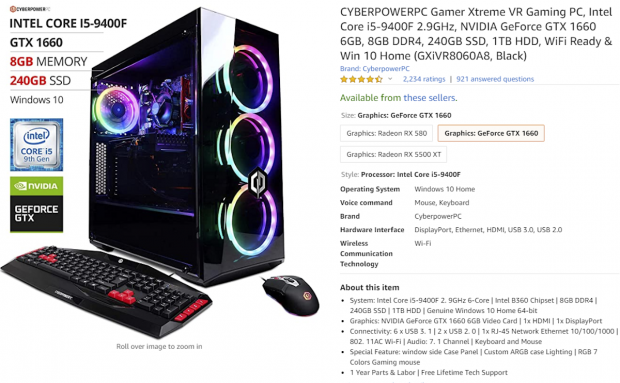 Starting with the processor, the 9400F has a pretty poor base clock at 2.9GHz, but does boost to 4.1GHz, as long as its kept cool and has plenty of power. This leads us to the motherboard and what chipset Cyberpower has used, which appears to be an Intel B360 chipset from several reviews.

The B360 is an entry-level platform that offers 24 HSIO lanes, and that is split into six USB 3.2 Gen 1 and four USB 3.2 Gen 2. It's also capable of having six SATA ports taking up two lanes and 12 PCIe 3.0 lanes for GPUs etc. This chipset doesn't allow for overclocking, but does support Intel RST, Optane, and CNVi Wi-Fi solutions.

8GB of DDR4 2400MHz memory is undoubtedly the bare minimum you will want in a modern system, and the 2400MHz really isn't a massive issue for Intel platforms. What we don't know is if this is a single stick of DDR4 or in a 2x4 configuration. If the former, you will undoubtedly want to pick up a matching second stick to get this machine in dual-channel memory mode.

For gaming, the GTX 1660 is a rather nice card, easily capable of handling 1080p in nearly any game. A few sites have this card pinned at running COD, Apex Legends, Battlefield, and Battlegrounds over 100FPS and over 120FPS in some cases.

The storage isn't much of an issue because it's easily upgradable. 240GB, in my opinion, shouldn't even be an option anymore with NAND prices where they are.

Overall, a somewhat decent machine if 1080p is your goal. However, it offers minimal upgrade paths, so do take note of that.