Hi there, I was wondering if 3 could be answered please? They are centered a bit about speculation.

1: I was wondering what your thoughts and ideas are about DX12 in terms of hardware that would need to support it and weather Intel and AMD will have to produce new hardware (besides GPU's) to support this new API?

Second: I was also wondering your thoughts on how much of Mantle would be used by Microsoft for DX12?

Lastly: Do you think NVIDIA will eventually build their own branded PC's in a few years time with their ARM Technology once that architecture gets good enough?

Sorry about the questions, I just like sticking my head into that kind of territory and taking off my tinfoil hat once in a while :)

My thoughts on DirectX 12, hey? We're seeing DX12 adopted pretty quick with the new GeForce GTX 900 series from NVIDIA having full support for it, and we're on the eve of the Radeon 300 series which will have support for DX12, too. We will need to see new hardware, but by the time it's here we should have plenty of new GPUs to choose from. 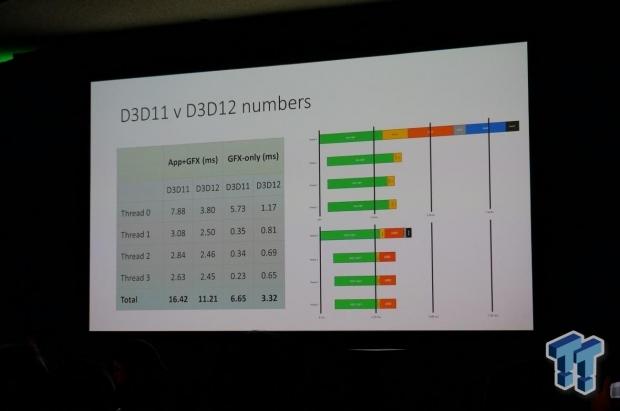 Intel and AMD will be right on it, as they are all part of the DX12 movement thanks to AMD, Intel and NVIDIA all having tight partnerships with Microsoft. On top of that, they will all want to push DX12 forward as it will really differentiate PCs away from consoles, and it'll sell boatloads of new hardware.

Mantle is done with now, as AMD has even said it wants to see developers to focus their attention on DX12. AMD released Mantle as a way of pushing developers towards getting "closer to the metal" or, achieving more access of the GPU itself. DX12 does that, as it removes multiple layers of the API which provides developers with even more access to the horsepower of GPUs.

As for the last bit, do I think NVIDIA could release their own branded PCs? Well, yes and no. We're seeing the company really expand its Shield line of devices, with the Shield Portable, Shield Tablet, and now the new Shield that is really just a kick-ass Tegra X1-powered console.

Secondly, NVIDIA just took the wraps off of the news that GRID will be rendering games in the cloud and pushing them down to gamers in select markets. Would they really need to release their own PC if they could render the game and shoot it down to a $199 console in the future at 4K? Or if you were to purchase a Shield VR headset in the future (which I think will happen this year), and have it rendered in the cloud and blasted down to your HMD?

Sure, NVIDIA could release their own branded PC, but I think we'll see that in the form of a Steam Machine or two, versus a full desktop PC as we know them now.