I want to buy a new motherboard with an Intel Haswell-based CPU to put 32GB of RAM (expandable to 64GB), and I don't play games. I only use Photoshop/Lightroom/PanoRAMa picture editing.

I don't have a big budget, and don't need pricey stuff. Can I only use the CPU integrated GPU and do the Haswell CPUs come with a heatsink ? What do you recommend I buy? For the CPU, I was thinking the i5-4430 and 4 x 8GB RAM.

The Core i5 4430 would be fine, and so would the RAM. As for the choice of motherboard, this really comes down to you. I would choose something like the GIGABYTE Z87-HD3 which is just $119.99 on Newegg.com. This motherboard will do you fine, and supports up to 32GB of RAM. 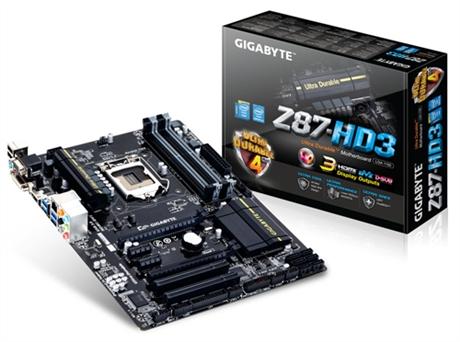 64GB of RAM on Z87 motherboards is going to be hard, and even if it wasn't, it would be very expensive. 8GB DIMMs aren't too badly priced, but there aren't many boards that support this. You would have to be doing some seriously high-end work to use 64GB, my advice is to max the board out at 32GB and if you find yourself limited, then upgrade in the future to a true next-gen chipset and go high-end.

The other thing is processor compatibility: the Core i5 4430 isn't capable of supporting more than 32GB of RAM. This would mean you'd need to choose a higher-end processor, or change socket which is going to cost even more money. My recommendation: stick with 32GB of RAM.

As for the integrated GPU, they perform well enough for what you'll be doing. We even tested the previous generation Core i7 3770K and found it played games at 720p just fine.