Intel's Core 2 family of processors are now starting to expand. At release there were only a few models released, the high-end Extreme and the 4MB cache Core 2 Duo. We now are starting to see the lower-end 2MB cache series hitting the streets and Quad Core is coming in a couple of months. While the CPU line up is starting to spread, so are the boards supporting Core 2.

Intel announced that their 975X chipset would support Core 2 but current motherboard before the release of Conroe based on the same chipset wouldn't because of the required VRM 2.2 voltage system that the Core 2 uses. No 975X motherboards were built to handle this, until now.

Since Intel aren't intending on releasing a new enthusiast level chipset for their processors for sometime, we are starting to see new revisions of older motherboards released like the ASUS P5W-DH - which is simply a P5WD2-E Premium with Core 2 support. Today we are looking at two new motherboards from MSI and DFI which are designed for Core 2 and Core 2 Extreme processors.

So come all ye faithful and see just who had the features and overclocking to be the king of the hill - will MSI murder DFI or will DFI devastate MSI? Let's take a look and find out!

Specifications of the DFI Infinity 975X/G 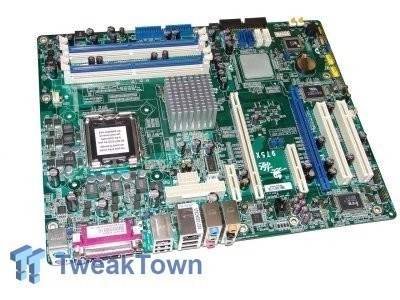 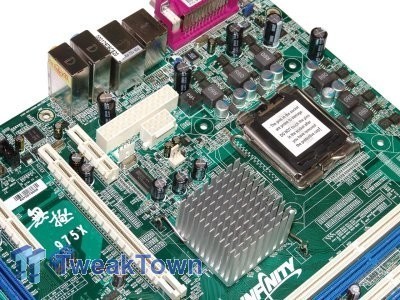 DFI's layout is extremely clean and tidy - after all, this board is intended to be a high-powered overclocking monster for the Core 2 family. The PCB is a green colour with a 30x30cm profile, which is full ATX size. The power connectors are located on the left side of the board behind the Stereo audio ports. While this is a little annoying, you can route the cables along the top of the case to avoid the CPU area. The single IDE and FDD connectors are on the right side of the board behind the DIMM sockets.

The CPU layout is also clear of large components, making it easier to install larger than stock default heatsinks. 6 phases are used to deliver power to the CPU which is more than adequate to provide power to the CPU. 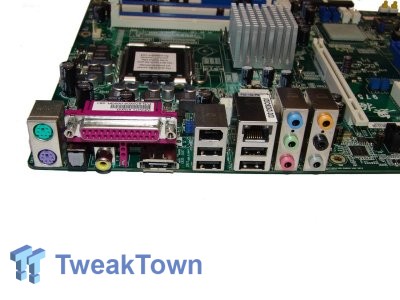 Now to the rear I/O and your expansion possibilities. 2 PSI ports are standard with 1 Toslink SPDIF out, 1 RCA SPDIF out, 1 Parallel, 1 e.SATA, 4 USB, 1 Firewire, 1 Gigabit RJ-45 and 6 stereo audio ports. 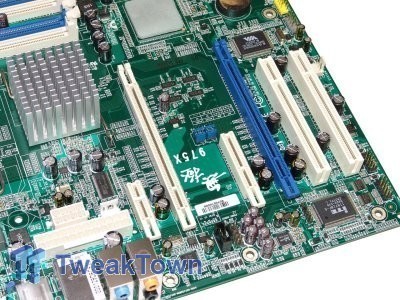 As for additional extras, a VIA VT6307 Firewire controller gives you a couple Firewire ports - one on the rear I/O panel and one header on the board. The e.SATA is controlled by a JMicron PCI Express controller chip. Lastly is a Realtek PCI Express x1 Gigabit LAN controller. 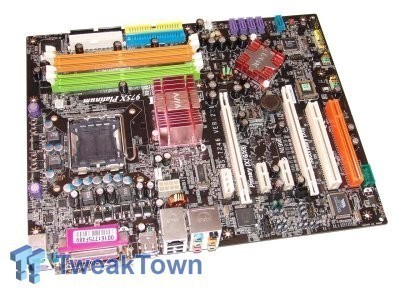 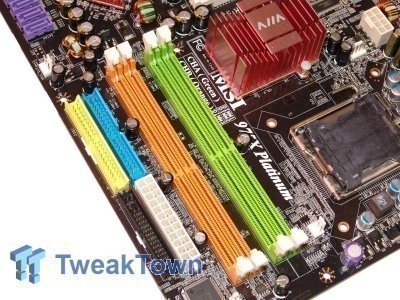 Now it's onto our next contender, MSI and their Platinum PowerUp Edition. MSI also uses the full size ATX 30x30cm but uses its black PCB that MSI tends to use for their high-end boards - in fact, this board is almost identical to the 975X Platinum standard in terms of layout. The 24-pin power connector, 2 IDE and FDD connectors are located behind the DIMM sockets. The new 8-pin EPS12V connector is located between the CPU socket and the rear I/O panel. Not the best place for it.

MSI falls behind DFI in the power features for the CPU; DFI gives you 6 phase but MSI only uses a 4 phase. While 4 is enough, more is better for a stable CPU when overclocking. 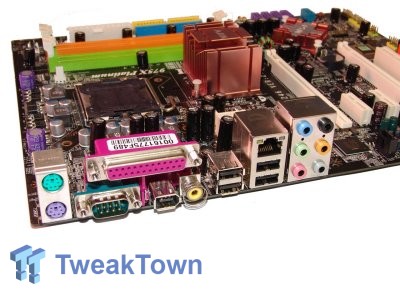 The rear I/O panel of the MSI board is identical to all the latest MSI power boards out there, so not really worth going through it all again. 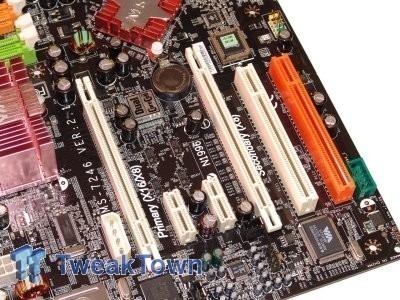 Now we get onto the overclocking features of the motherboards. First off we will look at the DFI motherboard. This time we aren't doing any images of the BIOS to streamline this review as much as possible.

DFI uses the same setup as we saw in our nForce 5 review; Genie BIOS is the location for the overclocking features.

CPU ratio can be controlled on unlocked processors and Core 2 Extreme. FSB options range from 133MHz up to 533MHz in 1MHz increments. CPU voltage ranges from default to +787.5mV in 12.5mV steps.

Now we move onto the MSI motherboard where you will find the entire clock options under the Core Cell Menu again.

MSI's board doesn't have as many overclocking options as the DFI board. First off CPU ratio can be adjusted but only shows up if you have an unlocked CPU like a Pentium Extreme or a Core 2 Extreme. CPU FSB goes from 100MHz up to 550MHz in 1MHz increments and CPU voltage goes from 1.2v up to 1.5V in 0.025v increments.

With the latest BIOS on the MSI website, we managed 362MHz FSB stable with DRAM 1:1, DRAM voltage at 2.3v, CPU voltage at 1.4v and PCI Express voltage at 1.6V. In all we had to raise the CPU voltage and RAM voltage higher than DFI and still the results weren't as impressive as the DFI motherboard.

We used an 8x multiplier on the DFI motherboard to get 3.02GHz (378MHz x 8) and on the MSI motherboard we used the same 8x multiplier which gave us a clock speed of 2.89GHz (362MHz x 8). The processors will likely be able to obtain a higher overall clock speed but we are only interested in the maximum FSB obtainable in our tests.

In all of our tests, the memory was running at 1:1 ratio with the CPU FSB. This will give an advantage to the motherboards which are able to overclock further.

At stock speeds we see all boards equal but when the OC factor kicks in, the DFI board goes slightly ahead due to a higher FSB.

Clock for clock, all boards equal each other out. When OC values are recorded, DFI pulls out just in front.

3DMark05 puts the DFI board on a high when its OC kicks in.

3DMark06 shows the gap even larger.

Clock for clock all are equal, it's not till clock speeds increase we see a winner.

Lastly we see that F.E.A.R. favours the DFI boards but only just.

We said it before and we will say it again - Intel Core 2 rocks - and now with new motherboards coming out from the Taiwanese folk, we are starting to see extra features and good overclocking options.

In fact, if you don't have good overclocking Core 2 motherboard, you aren't going to last since Conroe is very overclockable and loves the extra speed boost.

DFI has done a fantastic job on their 975X Infinity product - its features, layout and more importantly overclocking are some of the best we have seen from any 975x motherboard so far and its price is extremely competitive coming in cheaper than other Conroe supporting boards.


MSI on the other hand, while putting out a flashy board with plenty of good features, its overclocking wasn't as good as DFI and required more voltages which resulted in fewer MHz. It just doesn't seem as robust or overclocker friendly as the DFI motherboard - sure, upcoming BIOSes maybe result in higher overclocking but we can only test with what is available to us at the time.