NVIDIA's older GeForce GTX 980 Ti is still alright at 4K in Shadow of War with 33FPS average, but the new lower-end champion in the Radeon RX 5500 XT is a mini high-res champ (at least compared to an older-gen high-end card) with 36FPS average. The GTX 1080 Ti chews through Shadow of War at 4K with 58FPS average, while the RTX 2080 Ti handles it like it's 1080p with a huge 87FPS. 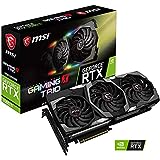