We just got back from visiting DFI here in Taipei, Taiwan and they had some interesting information to share with us.

While in a meeting with our regular contacts, we were joined by one of the main engineers responsible for the excellent line of DFI LANPARTY motherboards and here he was able to share some very interesting information with us in light for yesterday's events.

Yesterday as most men and their dogs know, AMD and ATI announced their intentions to join forces and create a "Processing Powerhouse". We won't see any products from the new company utilizing both AMD and ATI technology until 2008 however already Intel have apparently already stated that they won't be making life easy for AMD. We published a news story yesterday from Charlie over at The INQ which said that Intel will not renew ATI's license after this year to produce chipsets for the Intel processor platform.

Naturally, one of our first questions for DFI was if planned chipsets from ATI would still go ahead or be canned due to the merger of AMD and ATI. The good news for consumer choice; we can confirm that ATI's upcoming codenamed RD600 chipset with Core 2 Duo and Core 2 Extreme support will go ahead. DFI are currently working on the first versions of their RD600 motherboard and testing is going well. They plan to release the motherboard sometime in September of this year, as we said in our Computex 2006 coverage.

As for future ATI based Intel platform based chipsets, the future is uncertain. DFI didn't comment on future Intel chipsets from ATI but it would seem pretty clear that Intel won't make it easy for AMD/ATI in this area. This will hurt ATI's business somewhat as about 30% of ATI's chipset business is covered by the Intel platform due to strong onboard graphics features.

Back onto the RD600 Conroe chipset, DFI engineers are having much success overclocking the RD600 chipset (on a reference board) to around 430 - 450MHz FSB. Although on the other hand, nVidia's nForce 590 SLI chipset is only reaching around 350MHz on the reference motherboard. We'll have more for you on this later in the week in a very exclusive article from Taiwan.

For those wanting SLI + Conroe, you're only official option at the moment is nVidia's nForce 590 SLI platform. It's going to be a kick ass platform and we were lucky enough to get some photos of DFI's latest revision of their LANPARTY nForce 590 SLI motherboard which is by no means finished by it due to be released for sale around the end of August this year. 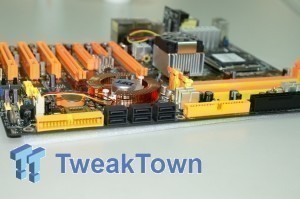 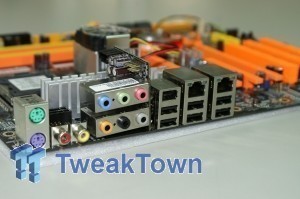 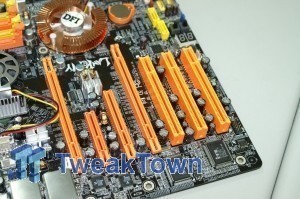 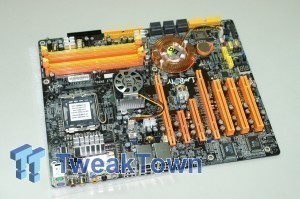 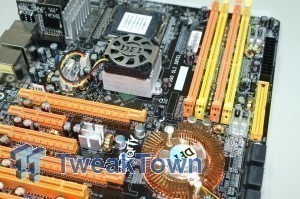 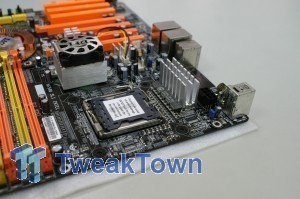 We'll have more for you later this week or early next week from Taiwan - stay tuned!