Each year during Computex 2006 we always manage to benchmark something pretty cool and usually quite exclusive - this year we think it is safe to say we out did ourselves! It just seems to be the way here in Taiwan at this time of the year - each company is trying to out do the other and hence are more willing to help media with hot new content. This year we teamed up with Jon and our friends from Hard Info in Denmark to provide the most complete set of benchmark on Intel's full range of new Conroe Core 2 processors on a Gigabyte motherboard.

We've seen benchmarks this week from other websites but none have been able to provide a complete set like we have nor have they been able to produce actual photos of the new CPU or any form of screenshots - we aren't holding back, we are going to show you everything which we saw. Some websites posted benchmark results from a pre-built test system by Intel in Europe, which they really didn't have much control over. On the other hand, we tested using a retail Intel 965P motherboard from Gigabyte, the 965P-DQ6 to be exact, without any interference from either Intel or Gigabyte. We were left on our own to build the system from scratch, install all of our own software, use our own benchmarking demos - just as we would in our own labs - it's a truly independent set of benchmark numbers on a system you will be able to buy once Intel release their processors to the market.

Today we are thrilled to bring you the most complete set of Conroe benchmarks to ever be seen and we compare directly against a lot of other processors including Athlon FX-62, 5000+ and Pentium EE 955 and so on. We've not only got the E6600 Core 2 Duo like most other websites benchmarked but we also have the higher clocked E6700 and the top dog Core 2 Extreme X6800. The E6600 operates at 2.4GHz and has an effective FSB of 1066MHz with 4MB L2 cache and with Dual Core. The E6700 is clocked at a higher 2.66GHz and the X6800 Extreme does its thing even quicker again at 2.93GHz (11 x 266MHz). Gigabyte made some tweaks to their retail motherboard like most others do, so the FSB was actually 268MHz which resulted in the CPU running at 2948MHz.

At launch, Intel will have a full range of Core 2 Duo processors available from 1.6GHz all the way up to 2.93GHz. The E4200, E6300 and E6400 only have 2MB L2 cache and the E4200 is set to be the low-end part with just an 800MHz FSB and does not include Intel SpeedStep technology, EM64T or Execute Disable Bit while all the others do. Hyper Threading technology stated to be disabled for all processors at the moment but we could see Intel releasing a new Core 2 Extreme processor with HT enabled at clock speeds over 3GHz. Later on Intel will also release their code-named Kentsfield processor which will use a Quad core design although at this stage clock speeds and so on have not been disclosed.

We benchmark in a range of applications and games such as Doom 3, Quake 4 and F.E.A.R. to give you an idea of how Intel's next generation CPU will perform. Apparently, Intel is set to delay the release of the processors into the channel until September, so now you may have to wait a little longer for what we really feel is going to be a CPU design for Intel which will really change the industry and what gamers consider as the CPU of choice. AMD Athlon processors have clearly been the CPU of choice for gamers for many years now, but will this change soon?

Let's get straight into the benchmarks after have a quick look at the test system specifications and some photos of our benchmark system and then analyze all of the data.

Not only did we benchmark the Conroe processors but we also took plenty photos of them and the Gigabyte motherboard we used to benchmark. This is the first time near final shipping versions of Intel Conroe photos have been published online and we're pleased to bring them to you first. 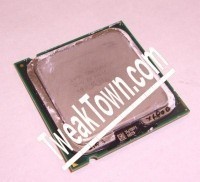 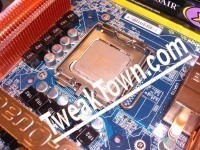 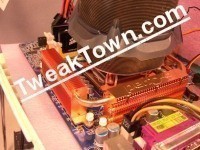 Below you will find a listing of the test systems which we used in this article for the various Intel and AMD processor platforms.


We used a range of different test systems since some of the testing was done in Taiwan during Computex and the other older processors were tested in our other labs. Although we managed to use similar type memory and hard drive and we were able to use the exact same graphics card and ForceWare driver which will help make things even more comparable.

We wanted to let you know the performance numbers you see here today should be a good indication of the performance you can expect once Intel release the processors. Even the Gigabyte 965P-DQ6 motherboard we used is finished and ready to ship and even includes full overclocking support in the latest BIOS which we tried. We didn't get a chance to run OC benchmarks but we'll cover that hopefully next week, if everything goes to plan.

You come here to see the benchmarks, so let's get started and see how Intel's upcoming range of Core 2 processors perform. Please note due to time constraints we won't comment on each individual benchmark, although on the last page we will discuss the numbers.

PiFast is an easy-to-use package written by Xavier Gourdon to compute  with a very large number of digits. We set the program to time how long it takes to compute 10 million.

In Cinema 4D we used the "Pedal" demo to time how long it takes to render on our range of different processors. Lowest rendering time is better.

In the KribbiBench City Benchmark the processor has to process around 106 million polygons. The higher the score the better, based on Frames Per Second. 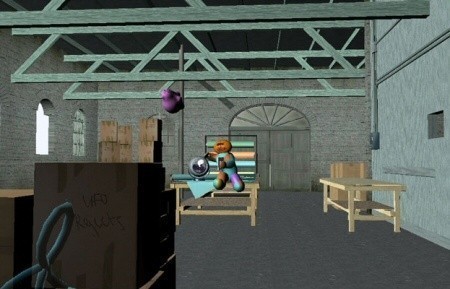 CINEBENCH 2003 is the free benchmarking tool for Windows and Mac OS based on the powerful 3D software CINEMA 4D R8. The tool is set to deliver accurate benchmarks by testing not only a computer's raw processing speed but also all other areas that affect system performance such as OpenGL, multithreading, multiprocessors and Intel's new HT Technology.

No wonder all the Intel staff had big grins on their faces all this week as they walked around here at Computex in Taiwan - they are sitting on a kick ass processor and just waiting for the right time to launch it into the market.

From our benchmarking, we can see that Intel's upcoming range of Conroe processors have a lot of raw performance available. Even the X6800 Core 2 Extreme which is clocked at just 2.93GHz is able to kill the 955 Extreme Edition processor pretty much all of the time. Considering the 955 EE is clocked over half a gig higher than the X6800, it is painting a very good picture for Intel. As Intel ramp up the clock speeds of the new Conroe chips, performance will only become stronger.

Not once did AMD's current highest performing and most expensive FX-62 processor come close to beating the Conroe. At times, the X6800 was over 50% faster. The 955 EE was able to beat the X6800 once in Quake 4 but that is because the 955 EE has a much higher clock speed. And even in Quake 4, the 955 EE was only about 3% quicker - imagine when the Core 2 Extreme hits 3.46GHz and you'll have a processor which will destroy the old Intel CPU design.

Intel's Conroe design makes their older Pentium chips look very, very ordinary. At times, the X6800 is able to beat the Pentium 4 631 clocked at 3GHz by as much as 180%. As far as gaming performance goes, Intel is looking very strong and as we have predicated and told many people at the Computex show throughout the week, Intel is looking like they will be the gamer CPU of choice in H2 2006 and all of 2007. The Core 2 Extreme clocked at 2.93GHz was able to beat the AMD Athlon FX-62 on average by 15% in our gaming benchmarks.

Right now is a good time to be in the industry, especially as an enthusiast and gamer. Intel are fighting back against AMD after some years of tough times as AMD become stronger and stronger and grew their market share against Intel. Now things are looking very good for Intel - they have the fastest desktop PC processor in the world just waiting to let it loose and a great chipset platform in the Intel 965P and nVidia nForce 5 series with ATI lurking around in the background with their RD600 chipset which should be launched around September 2006, apparently the same time as Intel will release their new Core 2 Duo and Core 2 Extreme processors into the market.