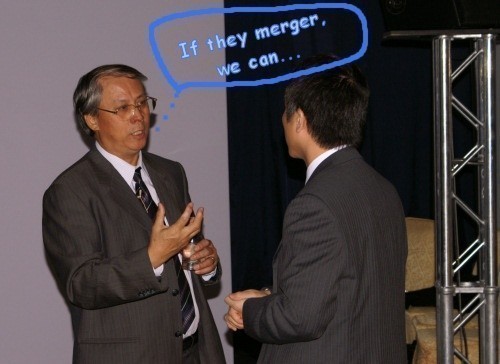 The word on the street here at Computex 2006 is that Intel considers the talks of the possible merger between AMD and ATI very likely, even inevitable, in the near future.

From a trusted and reliable anonymous source, today we learned that Intel are talking behind closed doors about the real possibility of an AMD and ATI merger, with some seriousness, and discussing what it could mean for their future business and bottom line.

If you sit back and consider the facts for a minute, it all seems very logical. If the merger was to go ahead, it could affect ATI's most direct competitor (nVidia) a lot - the merger would create a company who has the capacity to create good CPU's, good chipsets and good GPU's. By combining their resources, it opens things up for AMD and ATI to really take on Intel and nVidia in a big way and increase their market share in a range of different product segments.

For starters, the newly formed company would have the expertise to create (better) chipset platforms for AMD processors and we imagine nVidia would find themselves getting much less engineer design support from AMD than they do now when it comes to creating new AMD processor based chipsets. This could result in things such as nVidia chipsets coming out after AMD / ATI's own chipset or the newly formed company being less willing to help nVidia create the caliber of nForce chipsets which we are use to seeing these days.

At least in the initial stages, AMD / ATI would still need to work with nVidia because nVidia create probably the finest AMD processor chipset to date and because of that, the nVidia platform helps sell AMD processors, especially high-end parts due to things like SLI and Quad SLI. Although, it is interesting to consider how the possible AMD / ATI merger could affect nVidia's bottom line and ability to sell their chipsets.

While unlikely, imagine if the newly formed company kept nVidia out of the loop and nVidia couldn't produce AMD processor based chipsets, which is their biggest market for their chipset business unit. If the merger was to go ahead, we bet nVidia is thrilled to pieces that Intel's Conroe processors are looking like they will totally kick AMD's best CPU offerings butt, such as FX-62. In 2007, it's looking like Intel will become the gamer CPU and platform of choice, which means nVidia could transfer their best selling AMD chipset motherboards to Intel CPU based boards.