The Intel Optane Memory H10 is a system builder product that will likely never come to the channel market in significant volume. That doesn't mean you will never find this series at Newegg, Amazon, or CDW. If you do see these drives sold in traditional retail outlets, you need to jump over other hurdles to make it work. The drive divides the M.2 PCI Express slot into two PCIe 3.0 x2 lanes with one directed to the Optane Memory and the other to the 4-bit per cell portion. Very few motherboards support the M.2 lanes divided as required. On top of that, the H10 requires an 8th Generation Intel Core U Series processor, Intel 300 Series Chipset with on-package PCH and the latest Intel RST 17.2 driver.

In broad terms, the Optane Memory H10 is two separate Intel products. The first being an Optane Memory M10 and the second a trimmed down 660p. The retail 660p SSDs use the full PCIe 3.0 x4 interface, so the H10's traditional SSD bandwidth is limited. That doesn't mean the drive is limited to x2 lanes of bandwidth. The H10 is capable of reading and writing to both parts of the drive at the same time.

Assigning performance specifications to this product is not as cut and dry as with other products. The 256GB and 512GB H10 use the same ratio of 3D XPoint memory to flash, 16GB for every 256GB of flash. The ratio changes for the 1TB model that uses 32GB of 3D XPoint for 1TB of flash. 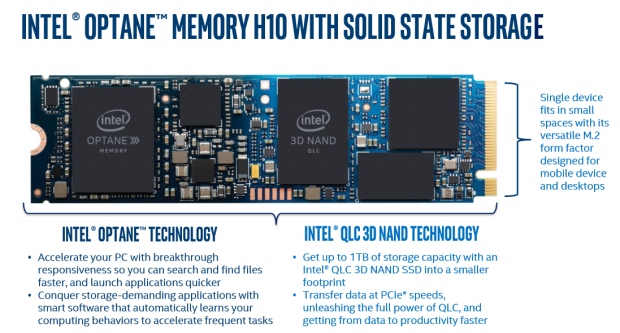 The Optane Memory H10 is a unique product that takes advantage of Intel's latest storage technologies. When the company first announced 3D XPoint memory, the state of flash was in a bad place. The dominate storage memory shipping from every company other than Samsung was planar 3-bit per cell (TLC) flash. Intel, Micron, Toshiba, and SanDisk didn't have shipping 3D NAND, and 3D XPoint was seen as the savior to low performance.

Since then every company has released 3D NAND and performance has increased considerably. Intel and manufacturing partner Micron currently have a dominant product with 64- and 96-layer TLC when it comes to random data reads. Some of that advantage carried over to IMFT's 64L QLC memory.

3D XPoint memory still provides superior random read performance with nearly a 3x improvement in our testing at low queue depths where consumer workloads operate. In our testing, the increase in IO translates into a more responsive user experience and a decrease in application load times.

The 256GB flash capacity H10 should appear mainly in systems costing between $799 and $949. The 512GB flash model takes up the next pricing tier between $950 and $1,499. The largest capacity Optane Memory H10 will appear in systems costing more than $1,500. These are just general observations but may change with user-configured systems.

We expect to see systems from Dell, HP, and ASUS first but other companies may have Optane Memory H10-equipt systems as well.

The warranties will come from system builders. Most don't list component warranties as individual line items. The Optane Memory H10 ships with up to a 300 TBW warranty. Each system builder will specify the warranty details and either list the write endurance, or cover the drive for the length of the notebook's warranty. 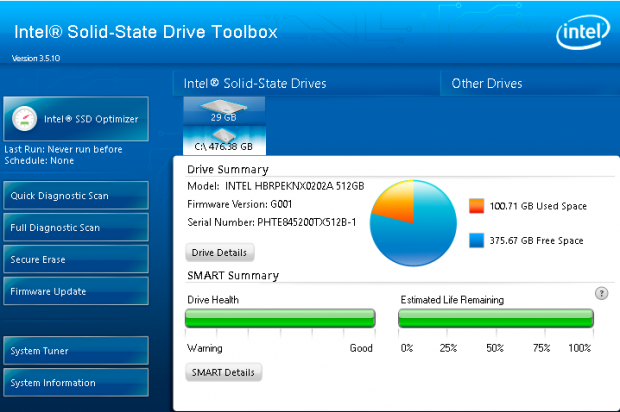 Intel's SSD Toolbox software has learned new tricks for Optane Memory systems including those with the H10. The software can see the two distinct products and display information about both. There is also a feature to clear the QLC drive's SLC cache, but that's mainly a feature for hardware reviewers and not something most users would run. 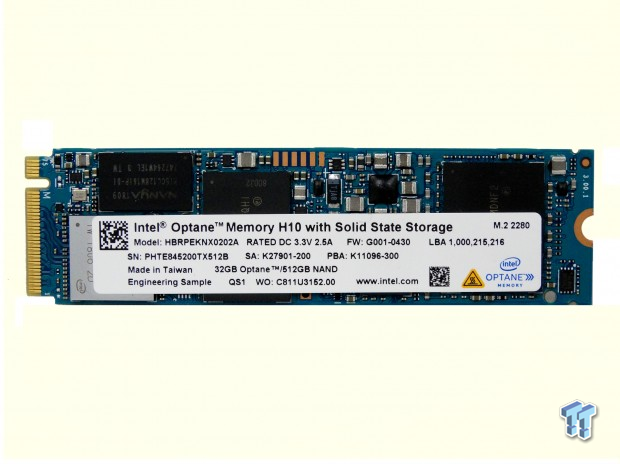 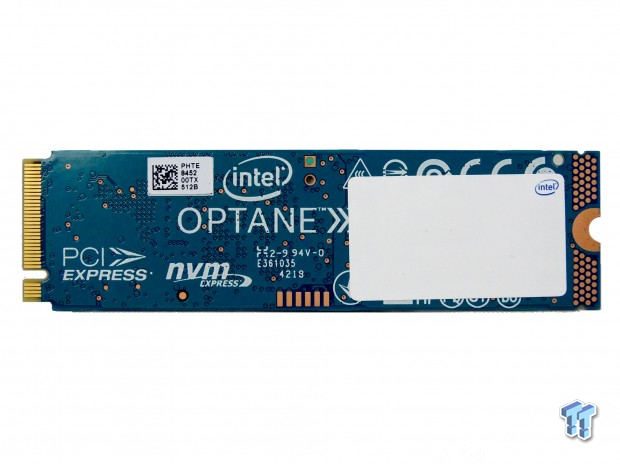 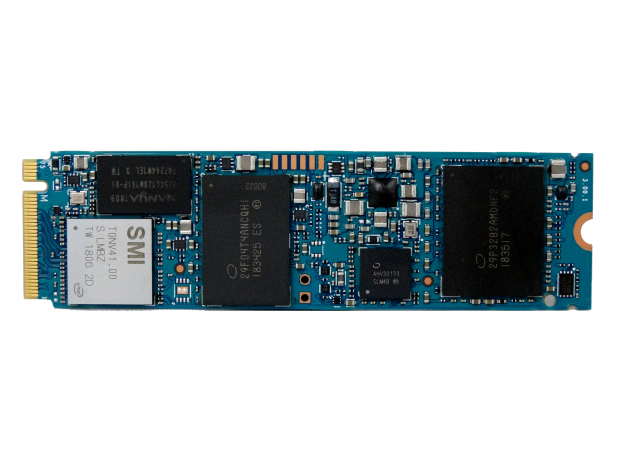 We've seen companies run two SSDs behind a SATA RAID controller in a 2.5" form factor before with mixed results. There has never been an NVMe SSD like the Optane Memory H10.

The QLC portion is closest to the M.2 fingers, and the Optane portion rests at the back of the drive. The H10 is a single-sided design that allows companies to make the thinnest notebook packages we've seen thus far. 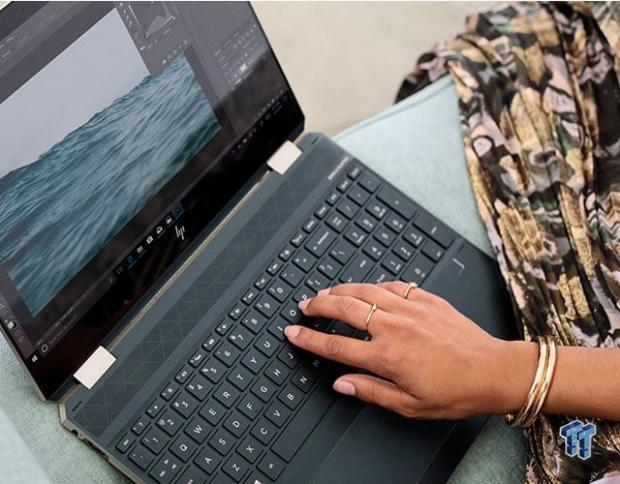 Intel provided media with an HP Spectre x360 notebook. HP plans to sell this system with the Optane Memory H10 as an option. The notebook is slim, beautiful, and a pain in the ass to use as a test platform. 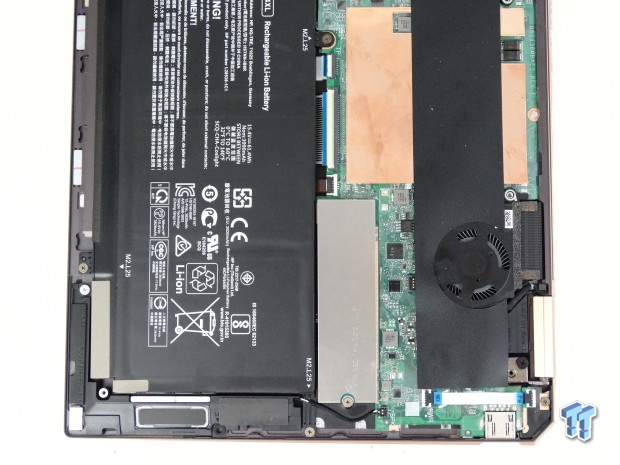 Enthusiast desktop systems move enough air to sail a small ship across the ocean. Subcompact notebooks, on the other hand, especially the new ultra-light systems don't have a lot of space to channel airflow past the storage device.

The small space doesn't have much of an impact on the Optane Memory H10, but we do see some thermal throttling on some of the comparison drives. I want to note that a system like this goes to extreme component validation. The comparison products are not part of the official HP Spectre x360 system. We just used other drives from previous product reviews.

The system also has issues with cloning images from Intel NVMe SSDs to non-Intel products. Due to time constraints, we only used Intel NVMe SSDs like the 760p and 660p for comparison. 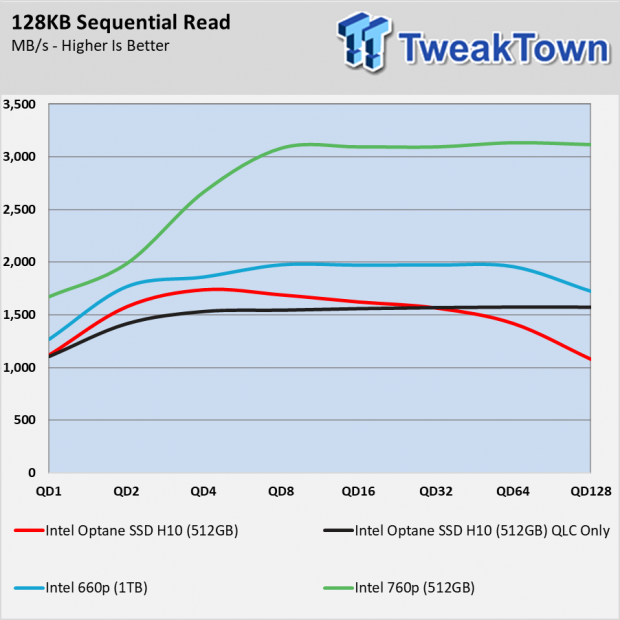 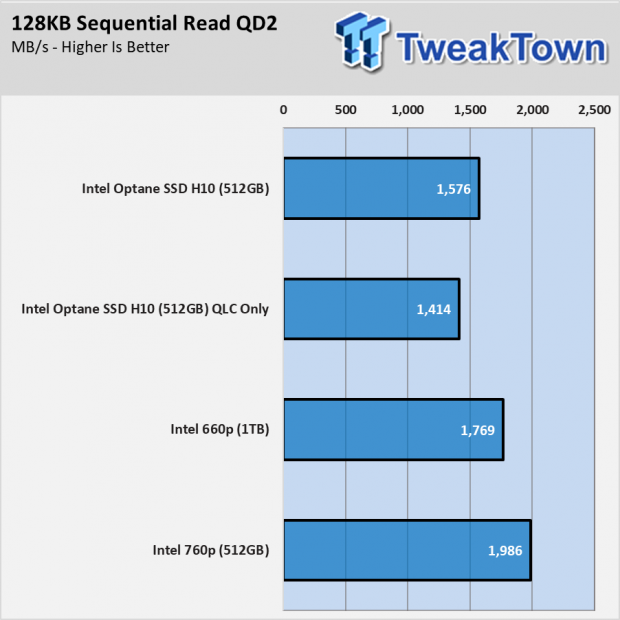 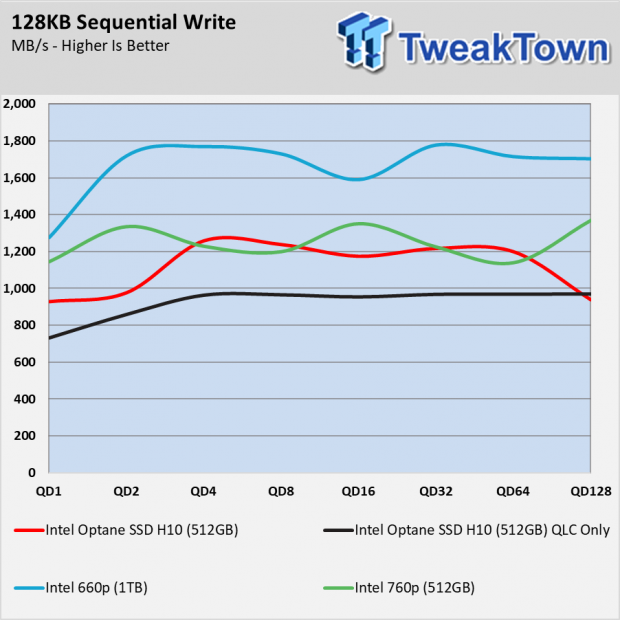 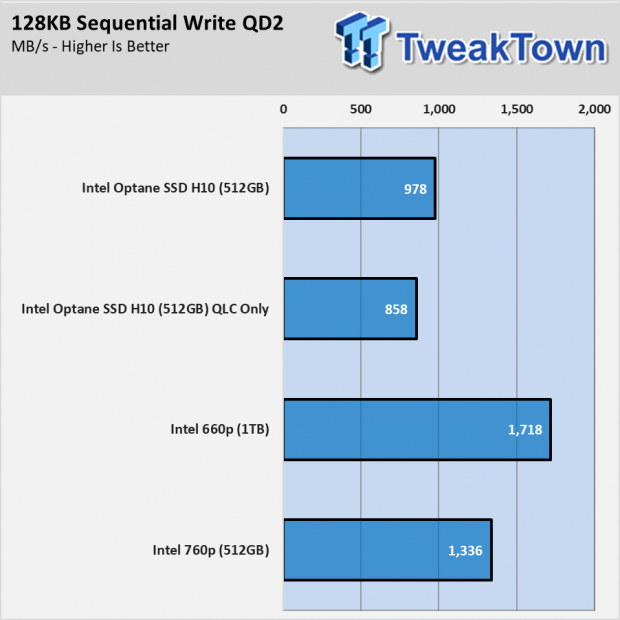 Similarly, we didn't reach the 1,800 MB/s sequential write speed from the Optane Memory H10 specifications. The drive surpassed 1,200 MB/s in our burst test but fell well short of the performance we measured with the 660p using all four PCIe Express lanes. 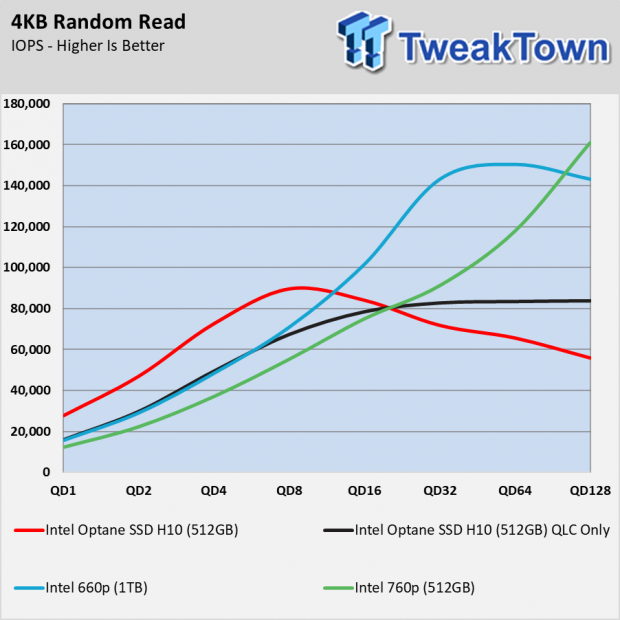 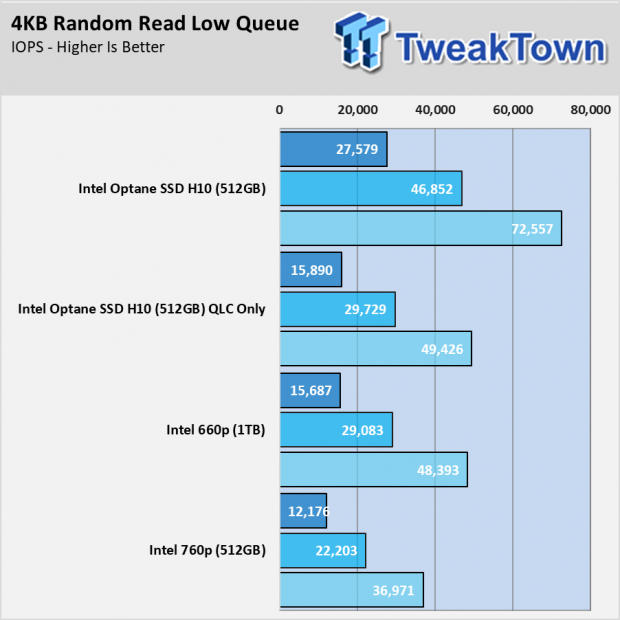 Random read performance is what makes you PC feel fast, and this is the area where 3D XPoint memory surpasses what's currently possible with flash technology. The two-lane controller from the Optane Memory series doesn't deliver the same performance as the 900P/905P enthusiast products but still delivers impressive random read results. When this data is read from the Optane portion of the drive, the latency is much lower than when read from the flash. 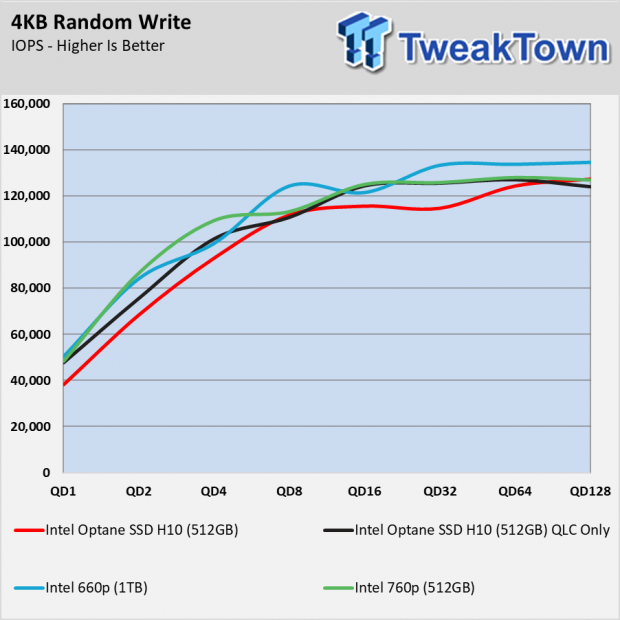 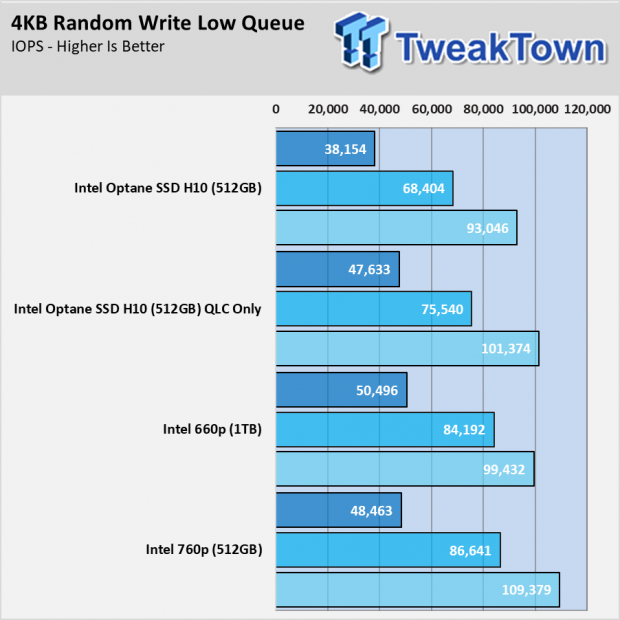 The 512GB H10 didn't accelerate the random data writes. We didn't expect to see as much performance loss compared to the H10 configured to write to the QLC portion of the drive. 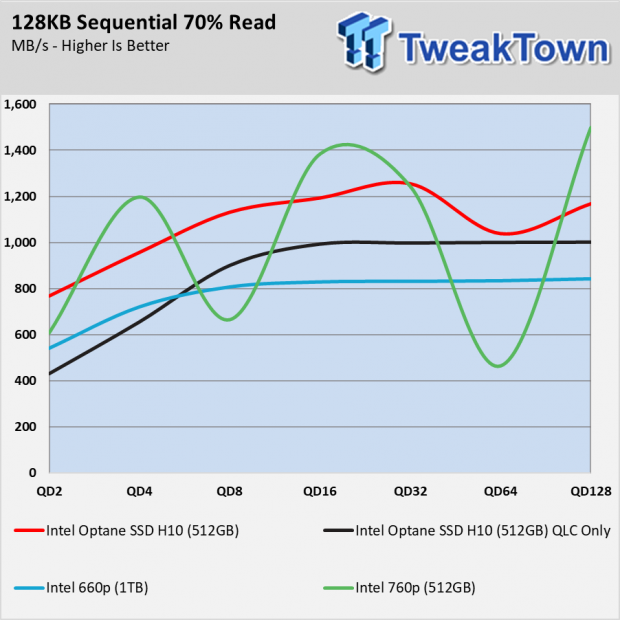 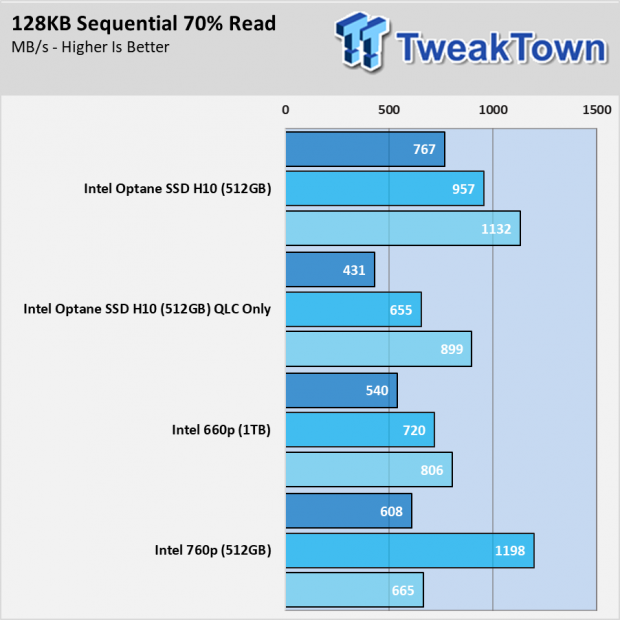 We didn't see an increase with the H10 reading and writing data alone, but when mixing data, the drive outperforms the others. The 760p with a 4-channel controller shows the potential of outperforming the Optane Memory H10, but the drive enters a thermal throttling state in the confined space of the HP Spectre x360. 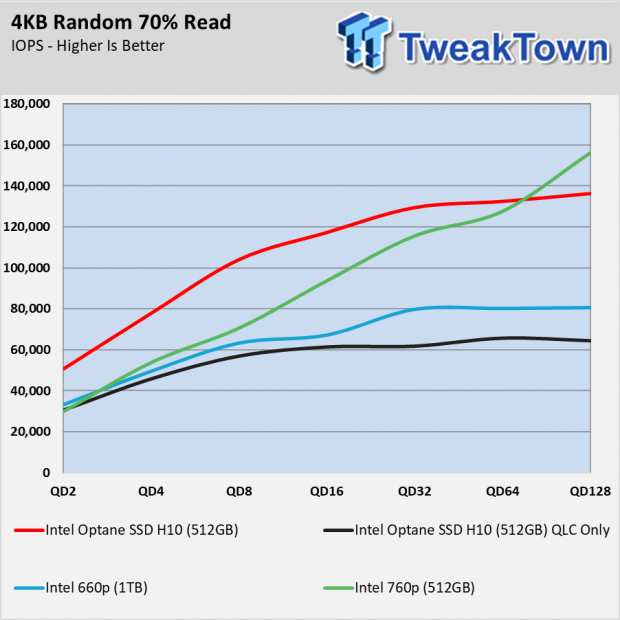 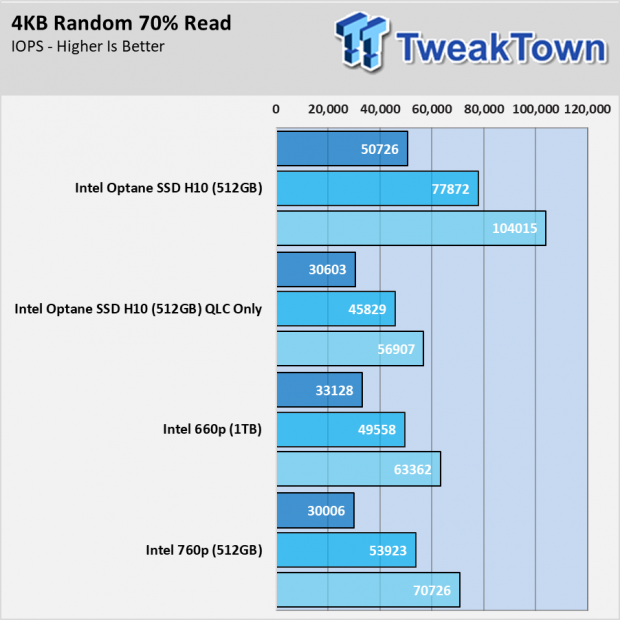 The H10 shows strong random acceleration when mixing reads and writes. This is very similar to the way data passes through your PC when opening applications and running software. This is the quintessential money shot for Optane Memory as a whole and shows the level of performance that is possible when the cache technology works as it should.

As with any cache technology, there are no guarantees to get the perfect mix of data coming from 3D XPoint and flash. 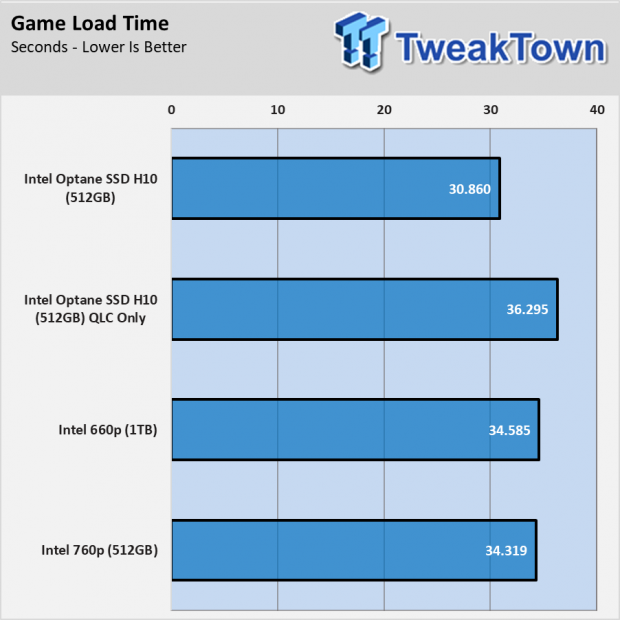 These scores are still significantly higher than our desktop system. The difference comes from the video card, or in this case, the onboard video attached to the CPU. Our desktop system uses a discrete video card that loads the data much faster allowing the drive to be the bottleneck rather than the system. 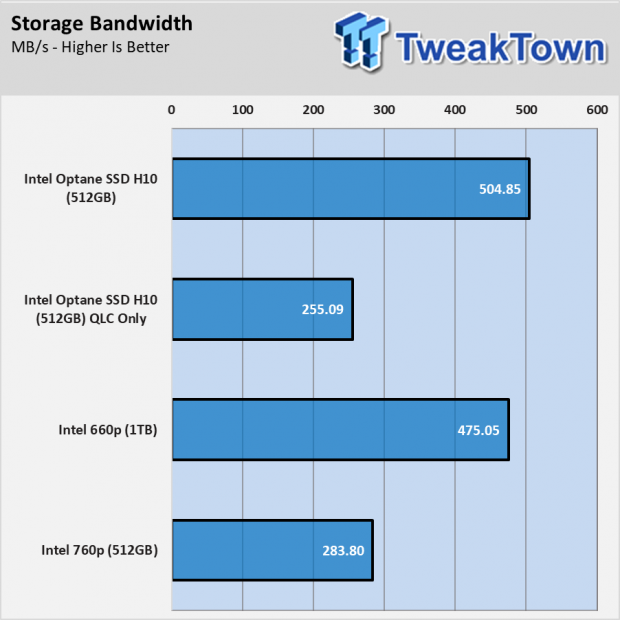 We expected stronger performance out of the 512GB 760p but remembered this drive had some issues with thermal throttling in our synthetic tests. The lower power 660p with QLC memory and a 4-channel controller didn't have the same issue, and neither did the Optane Memory H10. 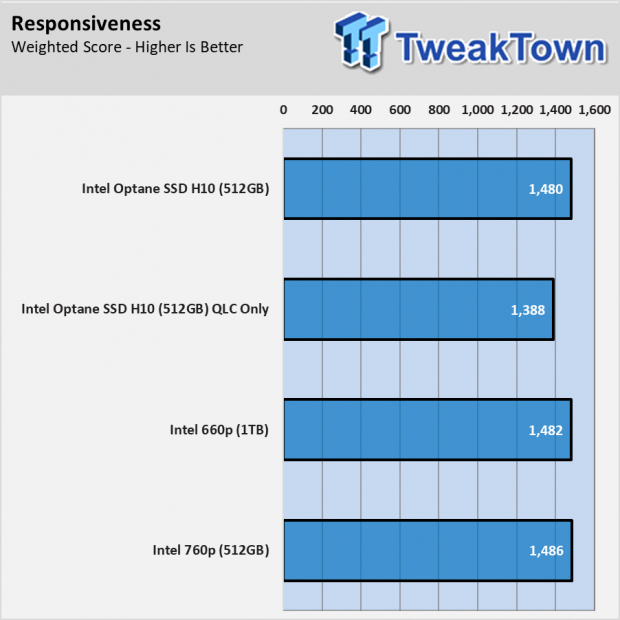 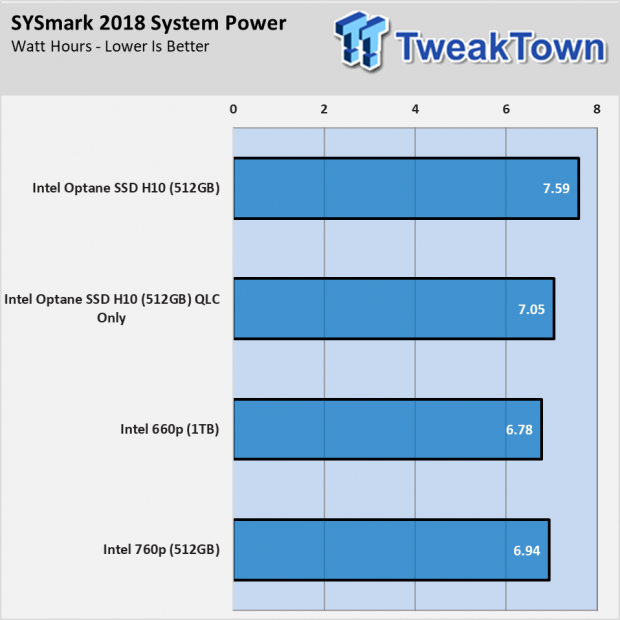 This is the first time we've used the SYSmark 2018 test. Part of the suite measures the system responsiveness. This is one area where Optane technology usually shows an advantage. We didn't see that in our tests where the default test runs three times back to back.

We've studied storage acceleration with a high-speed cache a number of different ways over the years from both Intel and third-party software developers. In principle, the technology is sound, but in practice, we've found faults. Mainstream uses gifted the technology benefit the most. We call it gifted because these users don't shop for the acceleration as the sole feature and rarely does inclusion make or break a device sale. 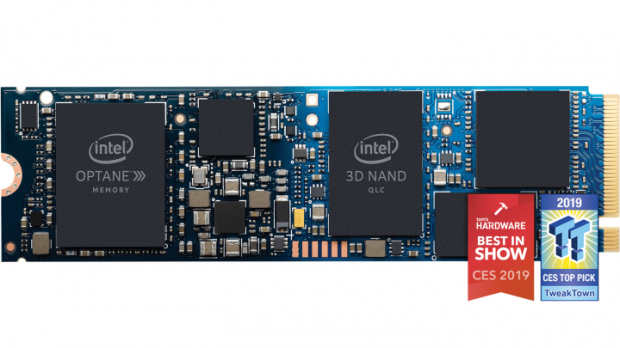 When it comes with a product preconfigured end users use it, but they look at the overall performance at the device level and not as an enabled feature. Most don't even realize why the system is as fast as it is. It's like looking at the green grass at a neighbor's house without considering the chemicals applied weeks before. You know the results, but leave the 'how' to the system builder, or gardener in our example.

Of all the Optane-based devices we've tested, this has been the most challenging. When we build test systems, it's usually a long process with several steps in the validation process. Like Doug DeMuro, we have to find the quarks and features. The HP Spectre x360 has a lot of quarks and features that make it a great convertible notebook, but it's not the ideal way to test storage performance. With a bit more time, we could work around some of the quarks, but our schedule was very limited with this review.

You don't need to run an application several times to see a performance benefit. In many cases, we spotted increased performance on the first test with the Optane Memory enabled. The performance does increase more as you continue to run the application.

Last but not least, and this one carries over to all NVMe SSDs, the largest performance increases come from heavier workloads. For consumer users, this usually means multitasking. Systems with Optane Memory love to multitask with several applications running at the same time. Your workload likely doesn't need the extreme performance of a dedicated Optane SSD like the 900P and 905P, but your applications and user experience will be better with Optane Memory.