For this article, we used the Synology DS1819+. This system doesn't support NVMe acceleration out of the box. The system does provide a single PCIe 3.0 x8 slot. With it, you can install a 10bE add-in card or a dual M.2 2280 accelerator card that enables NVMe SSD cache. Sadly, you can't use two cards at the same time with this NAS.

The NAS' configuration software allows us to configure a read-only cache or a read and write cache. The latter requires two drives to ensure data integrity. The read-write cache combines the drives in RAID 1 to mirror the data. The default cache setting for the Synology DS1819+ ignores sequential data. We unchecked the box to allow the cache drives to work with all data, sequential and random. The bottleneck in this configuration is the 1-gigabit Ethernet that limits throughput. Even though the Intel Optane SSD doesn't suffer from steady-state performance loss like flash-based drives, the 960 Pro never drops below the 115 MB/s that is the network bottleneck. For sequential workloads, NVMe cache acceleration is a wash if your network configuration is limited to 1-gigabit. With all four-cache configurations, we didn't observe any performance or consistency increase over the all HDD array. The tables turn when we start working with random data. With pure reads, the two Optane tests (read and read + write cache) outperform the other configurations. The two 960 Pro accelerated configurations follow. The pure HDD result is all the way at the bottom of the chart. The furthest gap between the HDD only and the highest cache result shows a difference of around 14,000 IOPS or around a 1400x increase! The Synology DS1819+ doesn't deliver a typical random write preconditioning curve like we see with enterprise SSDs. Even with a write cache, the results are very segmented with a lot of inconsistency. The system will use DRAM to cache incoming random write, either from the system itself or on the HDDs.

The highest IOPS we scored on this test were actually from the HDD only configuration, and that's due to the high-speed DRAM that is faster than both flash and 3D XPoint memory. There is a very limited amount of DRAM in place to catch the random writes, so even with the DRAM the results are inconsistent. 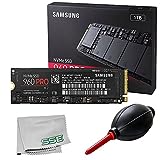