When QNAP first released a high-performance NAS with hot-swappable 3.5" and 2.5" bays the market took notice. The system set new standards for performance with advanced cache options, as well as a secondary array using flash-based drives. These systems are more like two NAS in one with one dedicated to cold storage using 3.5" drives, and a hot data area using SSDs. The magic starts when you mix the two with QNAP's auto performance tiering software called Qtier. Now, the technology comes in more affordable designs and that's what we're looking at today. 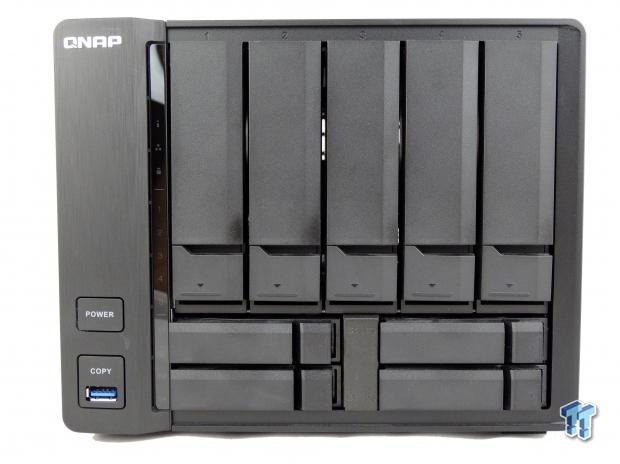 All of that storage performance will need to escape the system at some point, and QNAP takes care of that with a pair of Ethernet ports. We hope you have your network ready because the TS-963X comes with a dedicated 10-gigabit port that also supports the new 5GbE and 2.5GbE standards. The second port on the system supports gigabit speeds. 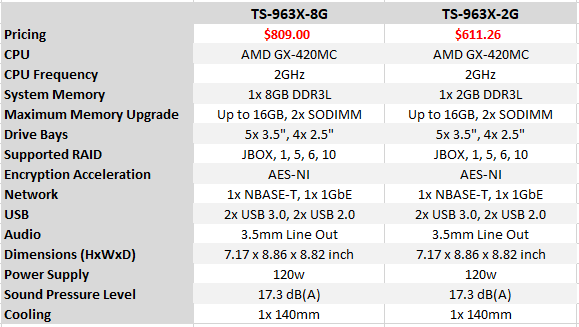 The low power AMD GX-420MC quad-core is the heart of the new QNAP TS-963X. The processor operates at 2GHz and features a four-core design. The TS-963X-8G we're testing today ships with 8GB of system memory in a single SO-DIMM module. The TS-963X-2G costs less but only ships with a single 2GB SO-DIMM. Both systems support up to 16GB via dual 8GB modules as an upgrade.

What sets this system apart from traditional NAS shipping today is the disk arrangement. The TS-963X is essentially a 9-bay NAS that sells for a 5/6-bay price. Users can configure the system a number of ways but two standout as the most obvious. Users can use QNAP's Qtier feature that shuffles data across the drives based on hot and cold storage. Users would need to load hard disk drives into the 3.5" bays, and flash-based storage in the 2.5" drive bays.

The other arrangement uses the same drive division, but operates as two separate storage pools. With Qtier, the user doesn't need to manage the location of the data, it's autonomous. In the second, users would need to put the frequently used data on the flash and the cold data on the HDDs. Both have advantages based on your personal or office's workload.

This series don't support direct multimedia use (HDMI to your TV) but does feature a line out for audio. Additional IO includes two USB 2.0 ports and two USB 3.0 ports with one on the front used to copy data to the NAS via a one-touch function that makes backup of portable devices as easy as hitting a button.

This series also supports the new NBase-T network technology with speeds of 10, 5, and 2.5 gigabit as well as more traditional 1-gigabit and 10/100-megabit. There is one Nbase-T port and one-gigabit port so users can operate the NAS on two networks.

We found the TS-963X systems available from a large number of resellers with a wide range of prices. Amazon carries this series and shows the 8GB memory model for $809.00 with free Prime delivery. The 2GB model sells for just $611.26, also on Amazon.

QNAP backs the series with a limited 2-year warranty in the USA. 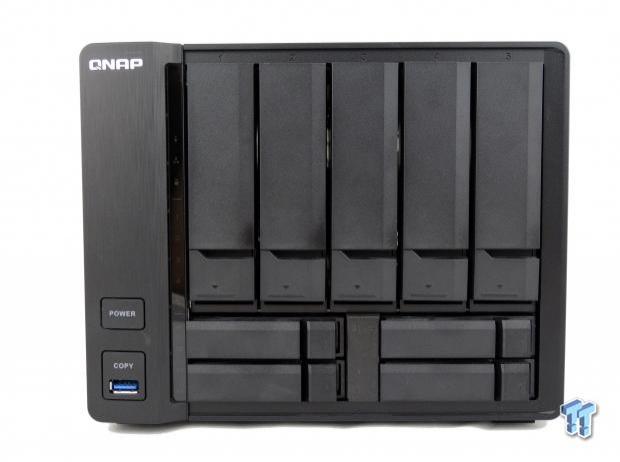 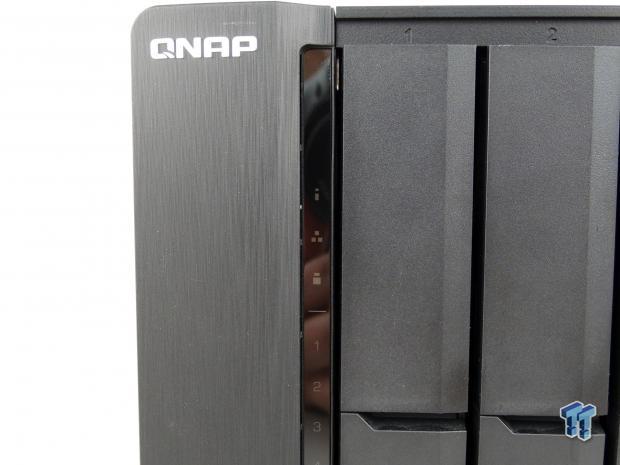 QNAP uses this unique design on a handful of pedestal NAS that allows the company to scale the drive count to levels we usually only see in rackmount systems. The pedestal form factor allows the company to place detailed status lighting for the drives and network letting end users visually spot reliability issues with a quick glance of the hardware. 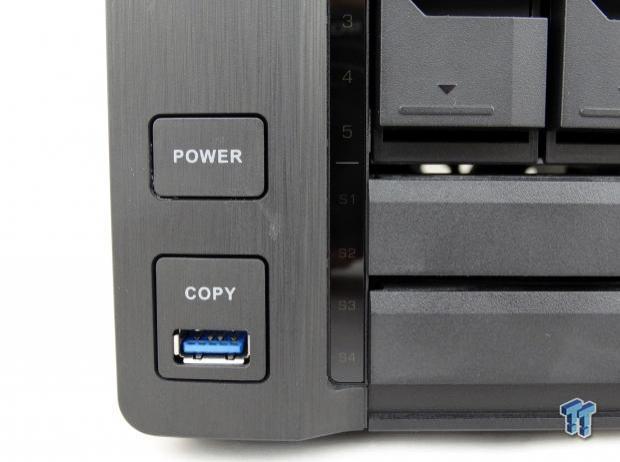 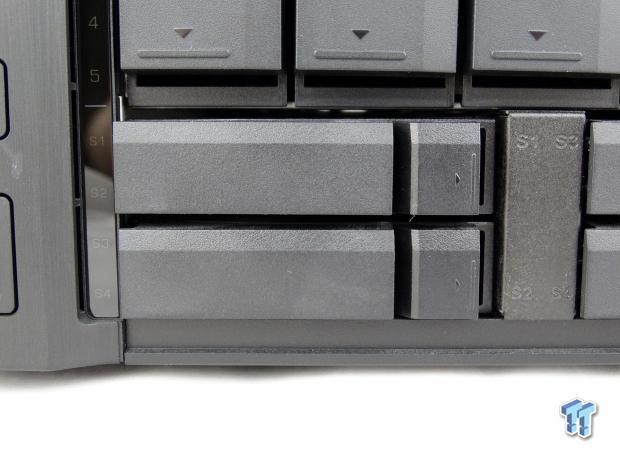 The front USB 3.0 has a unique feature that allows users to plug in a device, like a cell phone, tablet, or portable storage drive, and back the data up to the NAS by simply pressing the copy button.

The drive sleds do not lock with a key but do feature a slide mechanism that makes it more difficult to accidentally open the door. 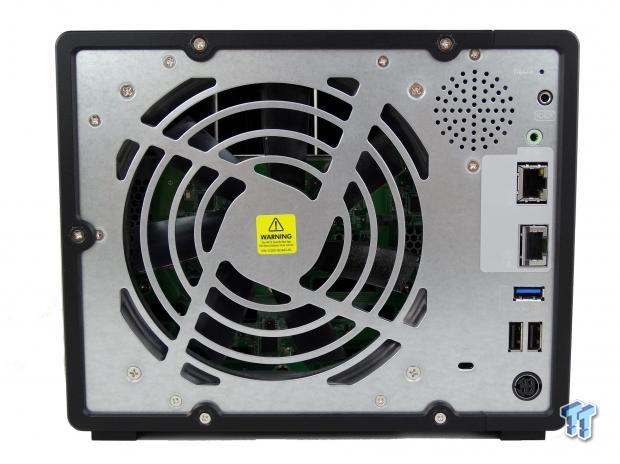 Most of the IO ports are on the back of the system. The round perforation area isn't for a fan. A small speaker sits behind it, and the NAS will talk to you when booting or shutting down. 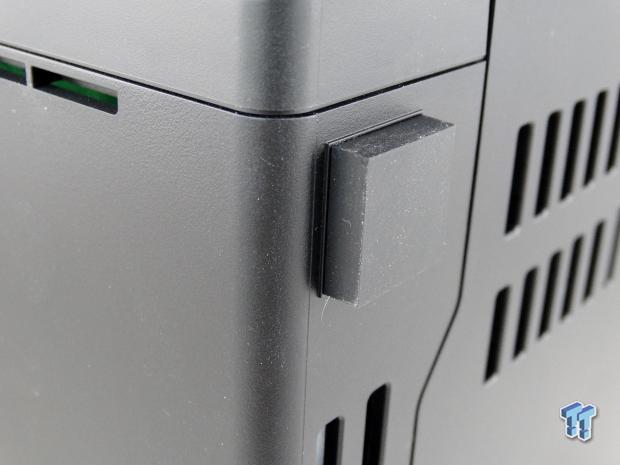 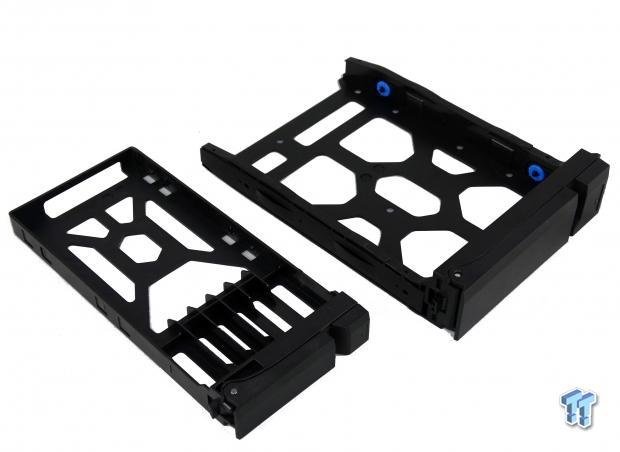 We noticed the depth and density of the isolation pads on the bottom of the system. This keeps the NAS populated with drives from vibrating your desk or other platform.

The drive sleds are tool-less for most drives. You will need to use the supplied screws to mount 2.5" drives in the 3.5" sleds, but pairing the right drive in the right sled cuts installation time significantly from the old method where each drive required four screws.

We use a Quanta QCT enterprise server to a Supermicro switch with 10-gigabit Ethernet connectivity to test network storage products.

We use Seagate IronWolf Pro 12TB drives in our storage systems. 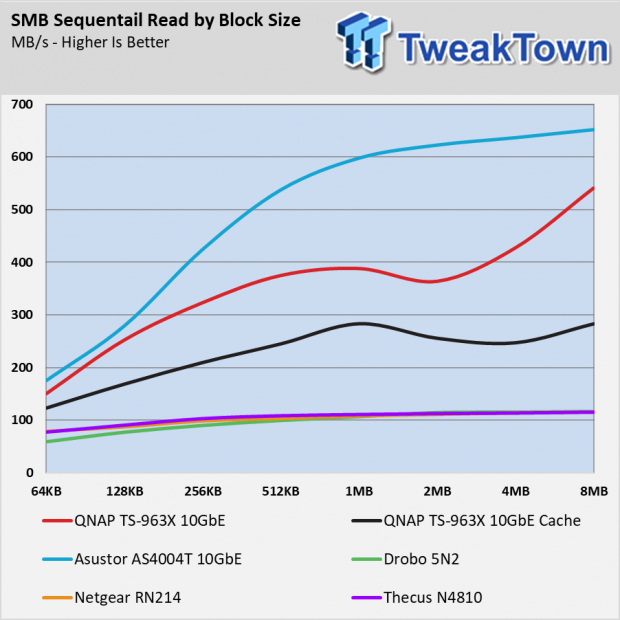 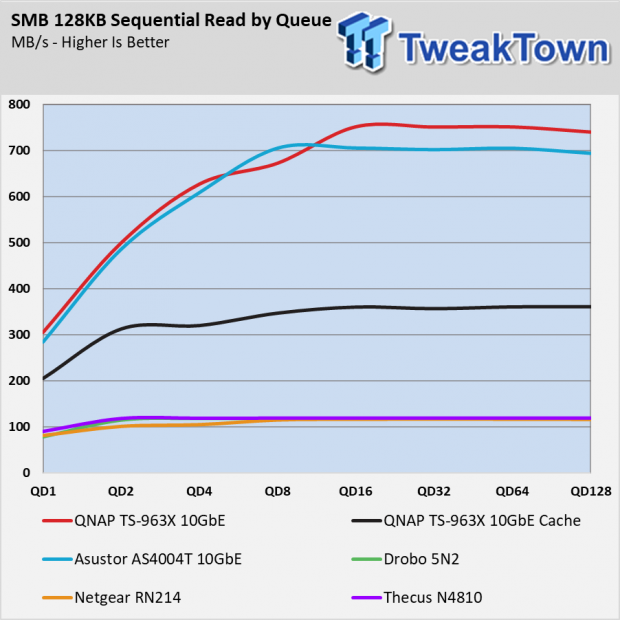 We see excellent scaling with the QNAP TS-963X as we progress through the blocks sizes. We can say the same for the queue depth test where we use 128KB blocks through QD1 to QD128. The one area that stands out is the TS-963X with the cache enabled using SanDisk Extreme Pro MLC SSDs.

QNAP shows the TS-963X delivering between 500 and 600 MB/s on the official product page but we managed to reach just over 750 MB/s with a heavy workload. 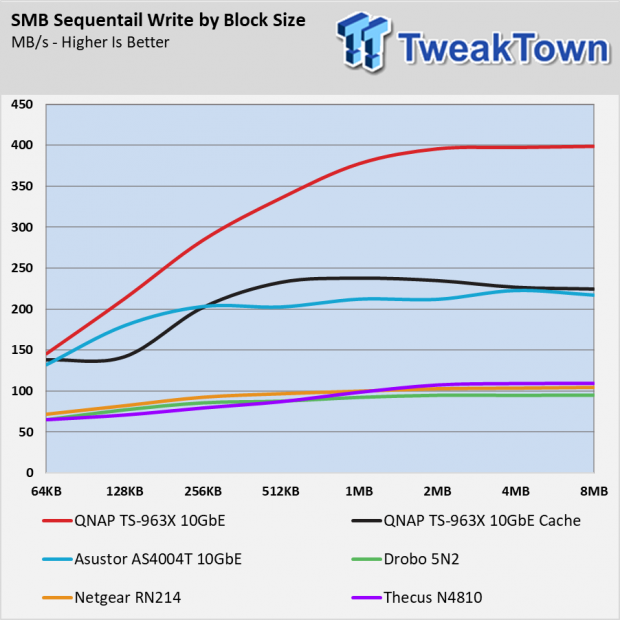 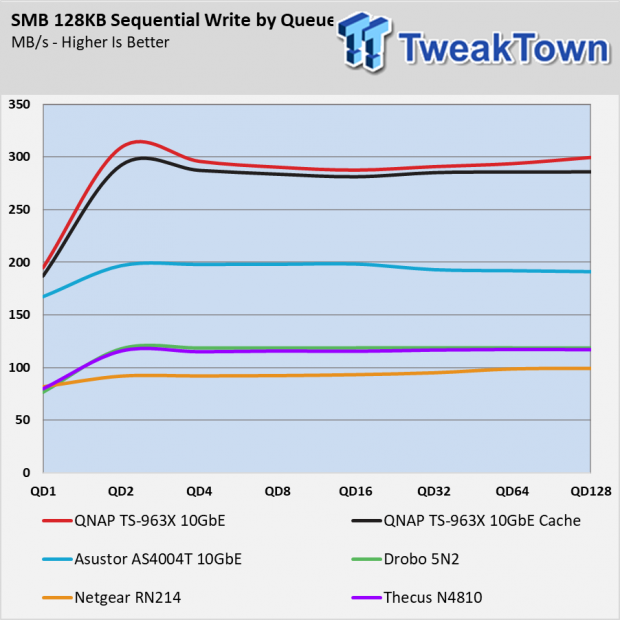 The block size test again shows a wide difference between the uncached and cached results but the two converge in the queue depth test. The TS-963X shows impressive sequential write performance with only five drives installed in the system. The low-power processor holds the array back slightly, but users benefit from the power and cost savings. 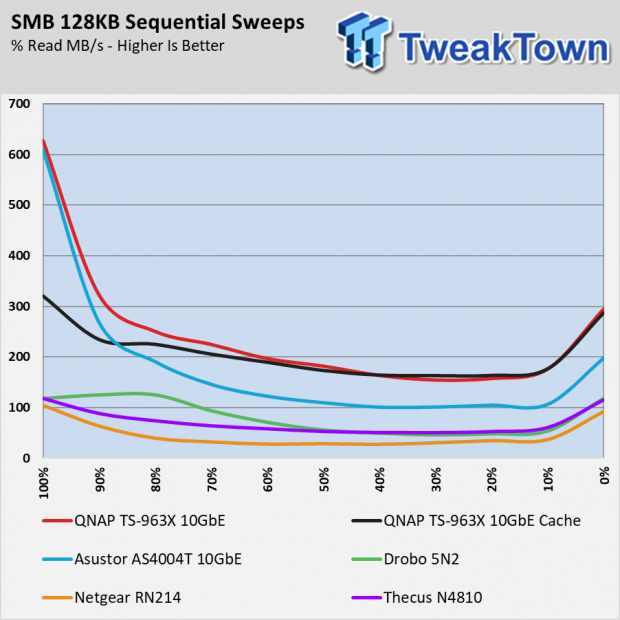 All storage devices slow with mixed workloads. Mixing reads and writes are more difficult on SATA-based drives because the interface can't read and write data at the same time. It's also an issue for HDDs because the mechanical nature of the technology. 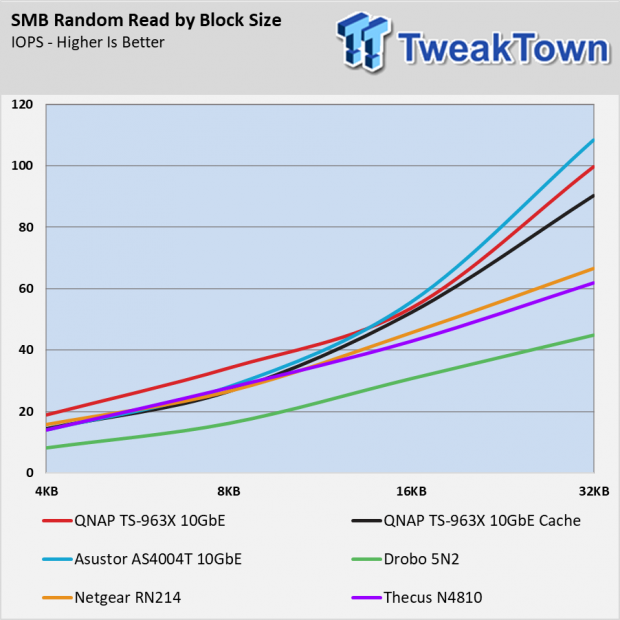 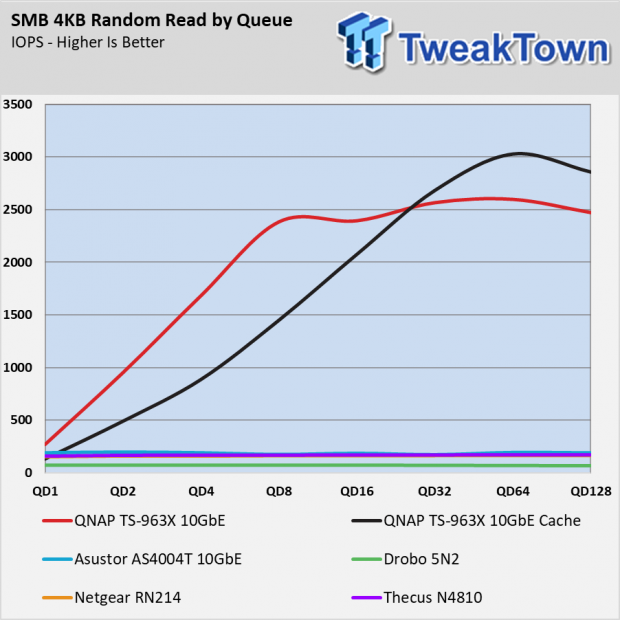 Random data doesn't benefit as much as sequential data over a 10-gigabit interface but we often see slightly lower latency under heavy workloads. Processor performance and the system memory has a larger impact to performance. Again we see excellent scaling with the TS-963X as we increase the workload through block sizes and queue depth.

The queue depth test shows us what happens when the cache warms up. This is the first test where the cached array outperforms the uncached RAID 5 array. 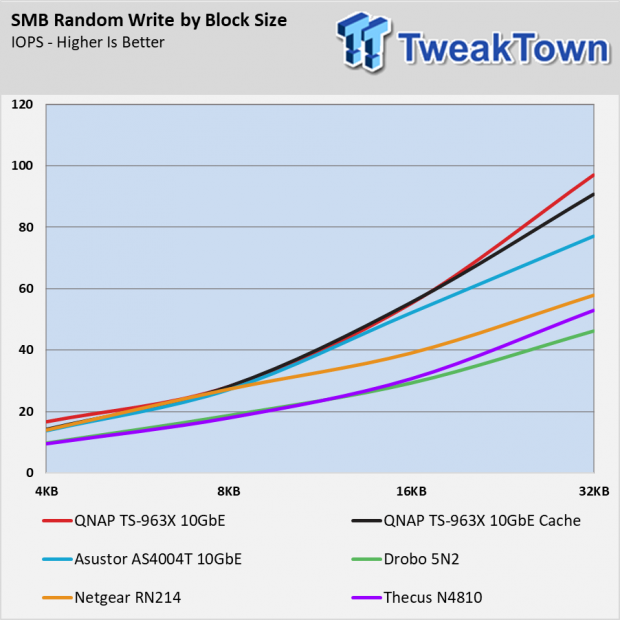 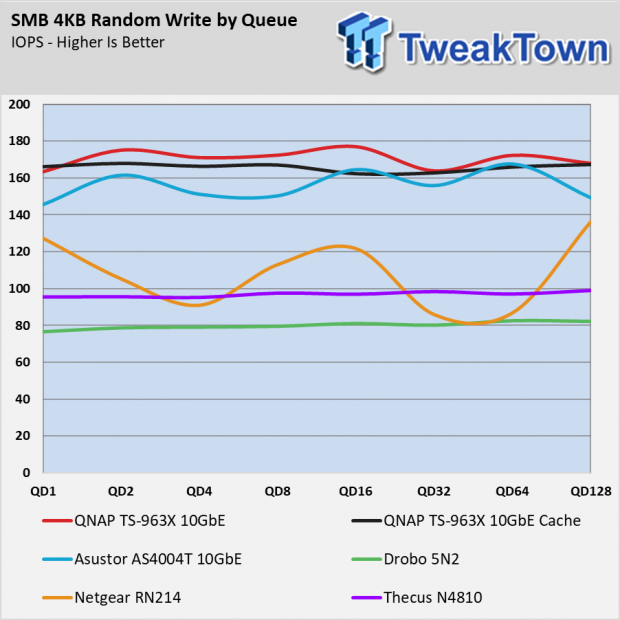 The TS-963X finishes the four-corner workloads with a strong random write display. We compared the system to popular models but never expect to sweep with this series before even enabling QNAP's Qtier technology. 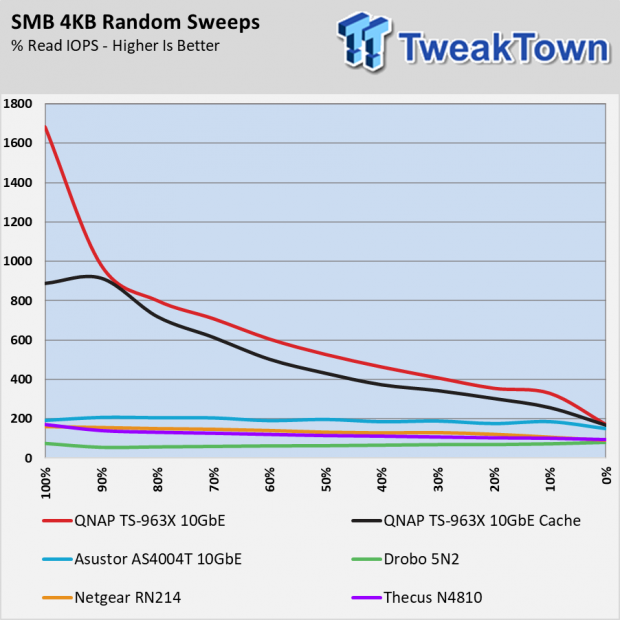 The random mixed workload test doesn't follow the traditional bathtub curve thanks to strong system caching on the read data. QNAP has always configured the Linux operating system, which runs under the GUI layer the end-user sees, to aggressively cache random data to playback at high speeds. 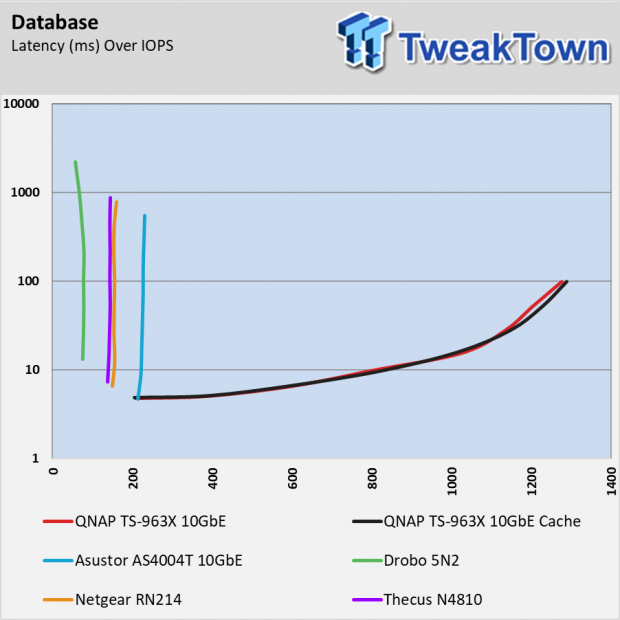 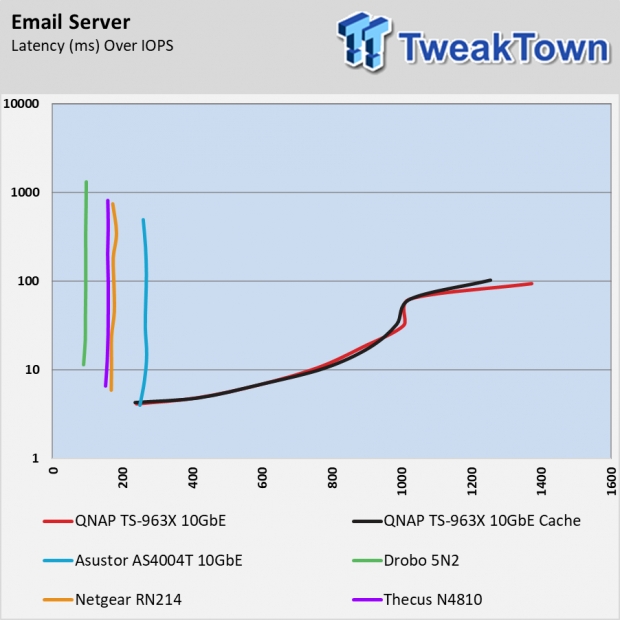 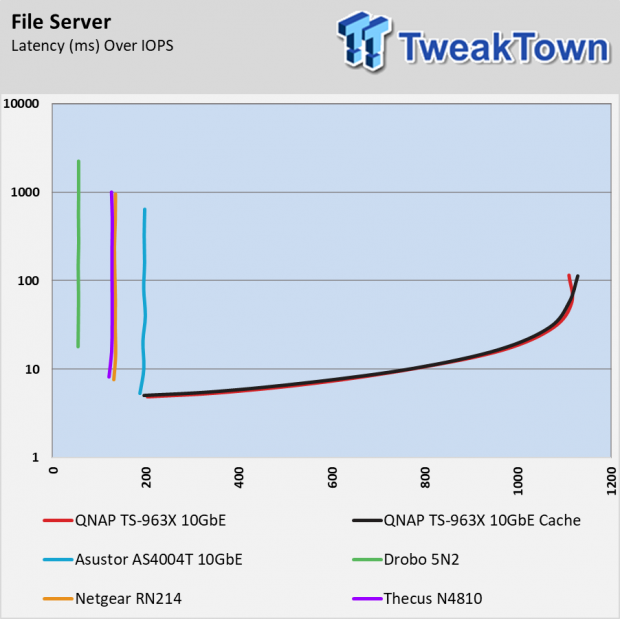 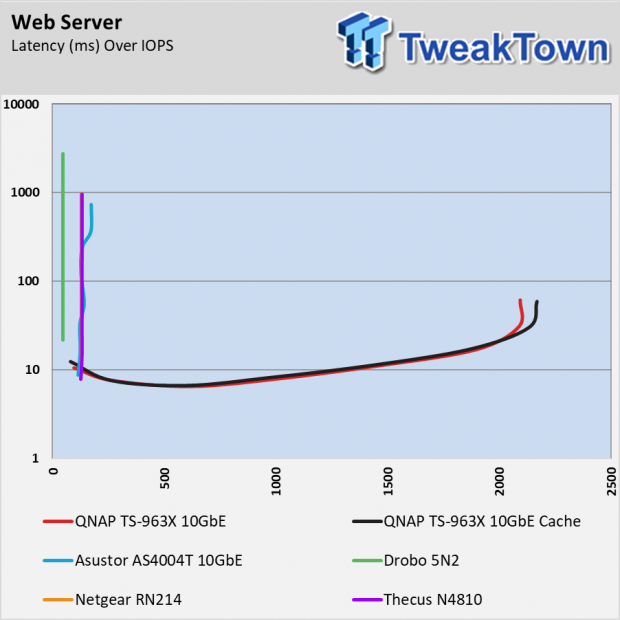 Putting the pure synthetic workloads aside after learning a lot about the performance of these systems, we can now move to realistic workloads. These charts show latency (vertical) and IOPS (input-output operations per second).

Many of the other systems don't scale as we increase the workload. As you ask those systems to perform more tasks, the actual performance doesn't increase, the latency just increases. The cause of this is often processing power. The other systems are simply overran with IO, so the processor struggles to keep pace.

The QNAP TS-963X on the other had scales as we pound the system with progressively more IO. This is the behavior you want to see when running applications. The ideal model shows a long steady drift to the right (more IOPS) before a sharp upward (latency) shift. 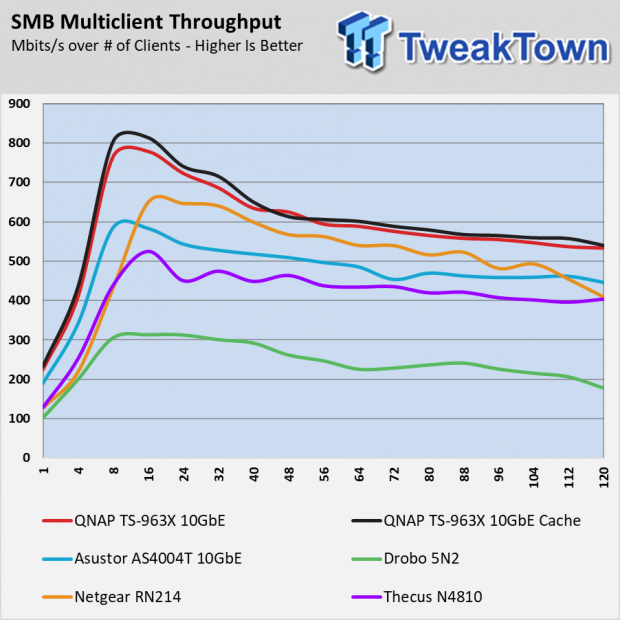 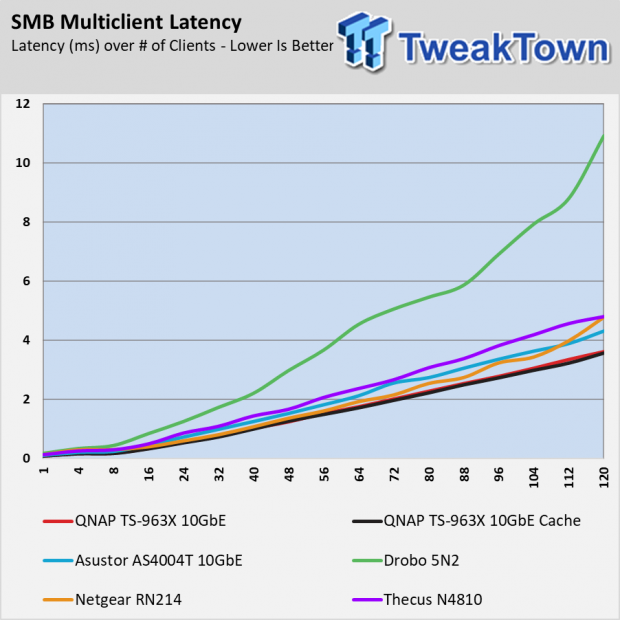 Our multi-client test uses additional computers to increase the workload rather than artificial queue depth coming from the same computer. This test runs Microsoft Office applications on up to 120 different virtual machines, each with a dedicated gigabit network port.

The test shows the peak throughput before the NAS starts to lose performance from latency increases that comes from the additional workers in the office. The TX-963X performed amazingly well, and even with 120 workers, the latency never cracked 4 milliseconds.

QNAP's updated pedestal server form-factor is as innovative as it is powerful. When first released, systems designed like the TS-963X cost thousands of dollars before you even started looking at drives. The new TS-963X is the evolution of those designs in a scaled down, but still effective form. This system uses a downscale processor, eliminates the least useful features for an office environment (like HDMI video), and uses lower-cost materials in the case design to cut the price by more than a third.

QNAPA priced this system aggressively in relation to other five and six-bay systems on the market today. 10-gigabit has spread all the way down to NAS costing as little as $400, so that's no longer a standout feature. Nearly every $600-$800 NAS released now checks the 10GbE box. What makes the TS-963X unique is the drive configuration that allows users to treat the system as two with a flash, and disk array, or as a 5-drive HDD NAS with a massive 4-drive tiered cache in front of the rotating disks.

Even without Qtier working with our synthetic workloads, the TS-963X shows strong performance that is often times faster than anything we've tested in this price range.

QNAP offers this system in two configurations, one with 2GB of system memory and the other with 8GB. The 2GB model is a better overall value now that DDR3 memory prices have dropped again. Some users may opt to buy the 2GB model and then replace the SO-DIMM sticks with two 8GB sticks and still have an overall package that costs less than the 8GB model.

Others may choose to keep the system closed and just accept the additional to lieu of upgrading the memory. Either way, the TS-963X is a stronger value for system administrators looking for a low-cost system that scales with increased user demand.