2018 was the year of the LED. At Computex this last June, PC lighting was all the rage. Pricing for the technology has plummeted, and that allowed companies to add lighting to existing products with minimal expense. The latest victim to join motherboards, DRAM modules, and other components are storage products. 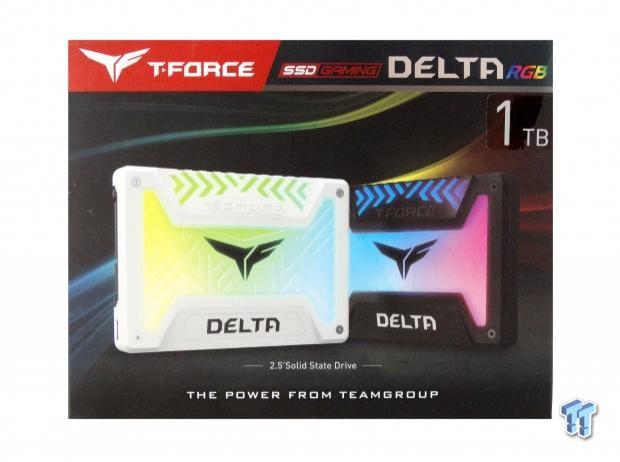 This Delta RGB focuses more on the lighting than pure performance. It sports mainstream SATA performance numbers but at the same time delivers the niche feature without gouging your wallet. Adding to the overall value, the company also ships matching T-Force branded Delta RGB DDR4 memory. Both the SSD and system memory ship in cool white or black design to accent your windowed gaming system or custom built.

You need a flow chart to break the T-Force Delta series down. There are technically three series, Delta, Delta S, and Delta R and we will break each down in the next session. For each subset, there are three capacities, 250GB, 500GB, and 1TB. The madness doesn't stop there, each of those nine models ships in a black or white chassis, so that makes a grand total of eighteen product SKUs.

The drives use the Silicon Motion, Inc. SM2258 controller, the same found in the Crucial MX500 we often praise. The difference is in the flash. The Delta RGB uses Micron's 32-layer TLC memory, and the MX500 uses the newer 64-layer memory. It might not sound like much of a difference, but we still consider the 32-layer the worst flash memory ever used in products.

To be fair, companies like T-Force have had time to learn more about 32-layer Micron TLC and improve it through the controller. The Delta RGB has the best implementation of the technology we've tested, but it's impossible to get around the low queue depth random read performance that was an inherent problem with this memory.

Pricing varies between the different models slightly. There are three LED types, two chassis colors, and three capacities. Expect to spend between $60 and $70 for the 250GB models. The 500GB drives sell between $70 and $80, a far greater value than the smaller drives. The largest in this series, the 1TB drives, sell for $130 to $140.

Team Group doesn't list any endurance criteria for the Delta series but does back the drives with a 3-year warranty. 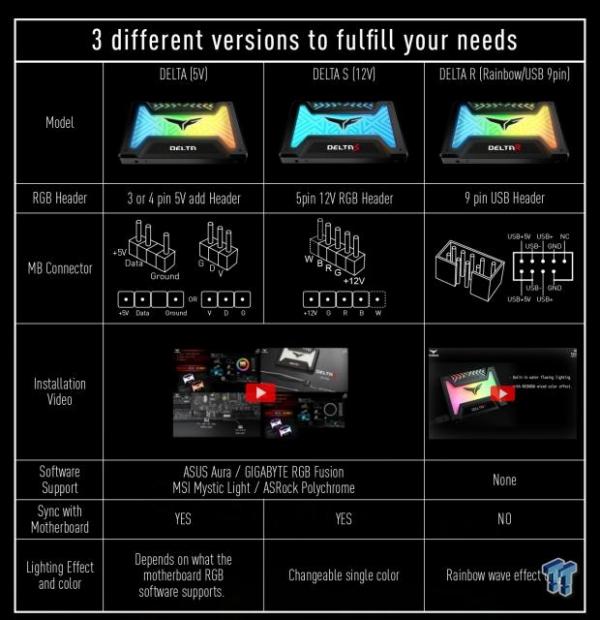 As we mentioned, there are three different versions of the Delta RGB series SSDs. T-Force sent us the 5V version that is addressable. This is the most advanced. You can use software to control the pattern. Sadly, all of my motherboards with RGB use the 12v power system. The Delta S model would have been a better choice for my systems. 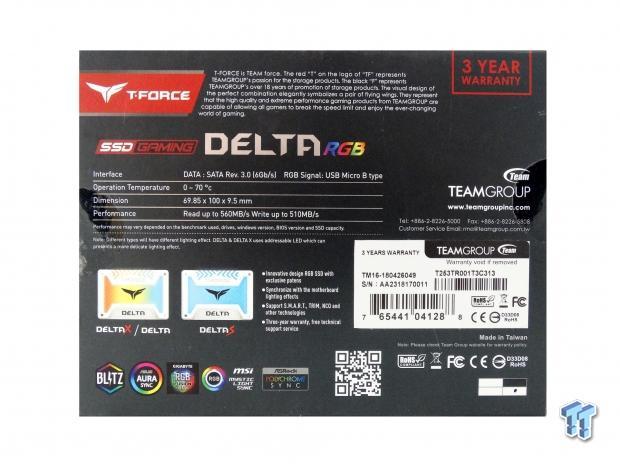 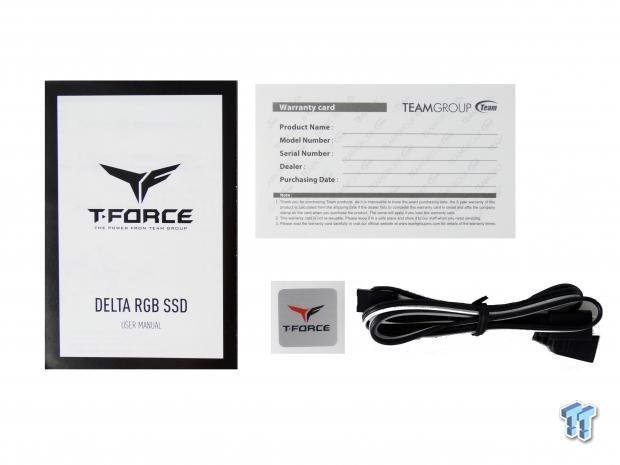 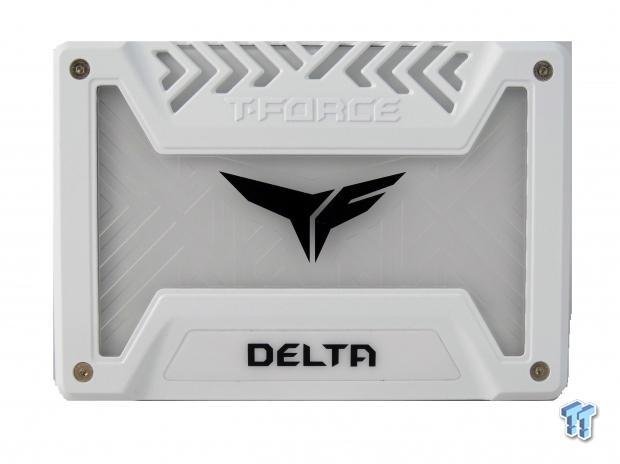 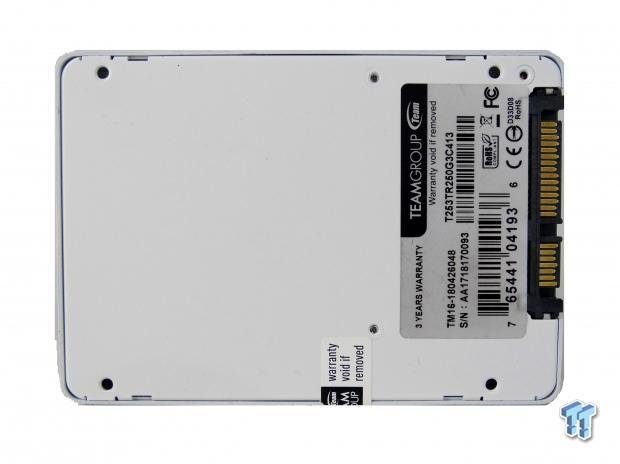 The Delta RGB uses a case design that is thicker than most consumer SSDs. The lighting would be lost in a notebook, and there isn't a guarantee it would actually fit. It's best to use this series in a desktop with a window or other similar feature so you can actually see the RGB magic working. 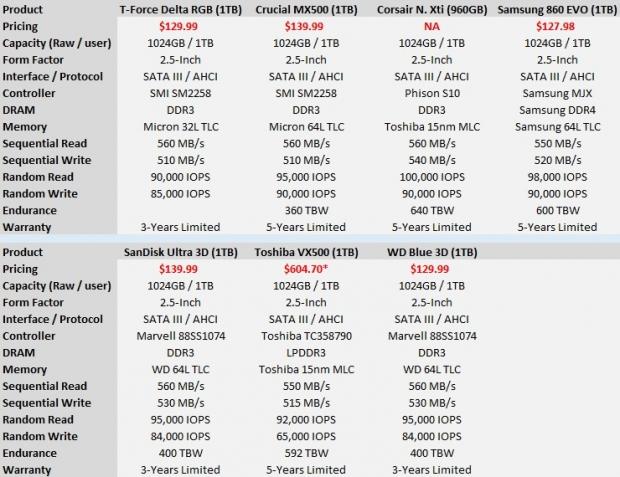 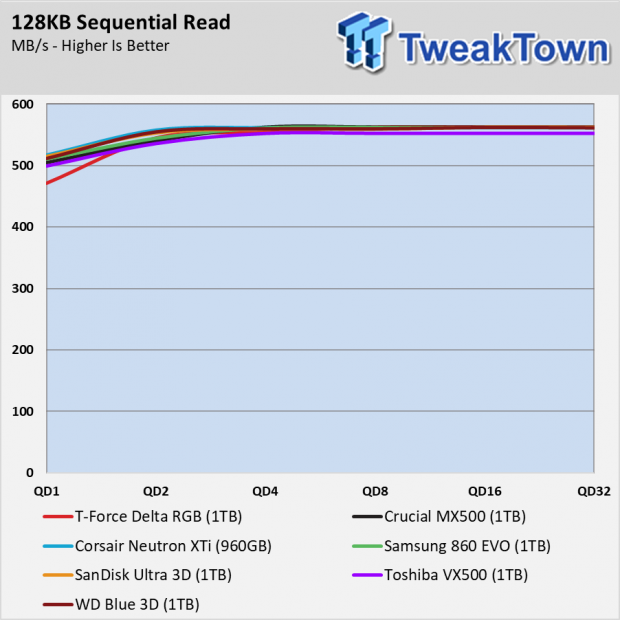 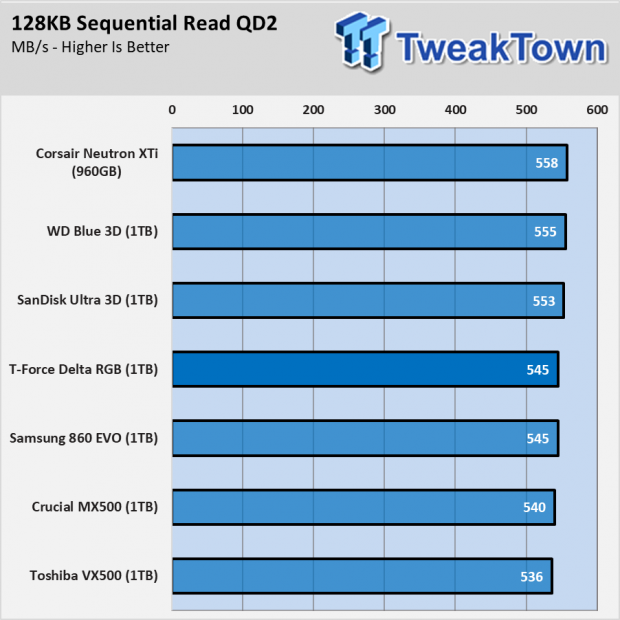 The chart shows that all of the drives perform well with sequential data reads using large block size data. The Delta RGB does trail the others at QD1 (Queue Depth), but it quickly joins the others. 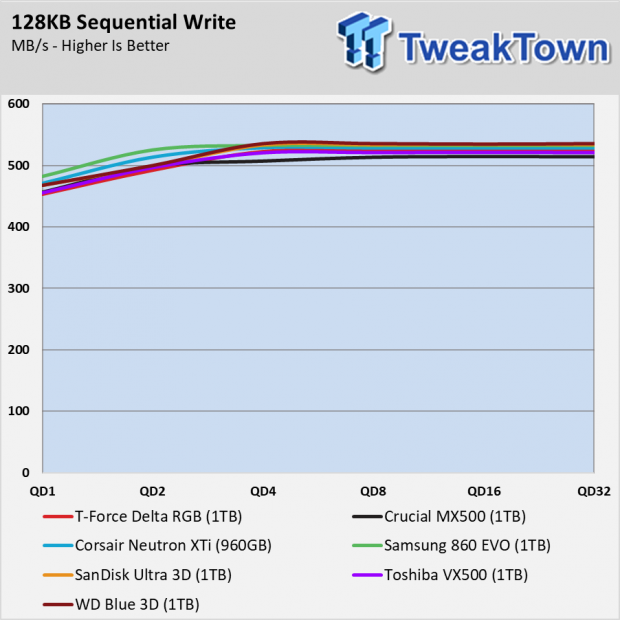 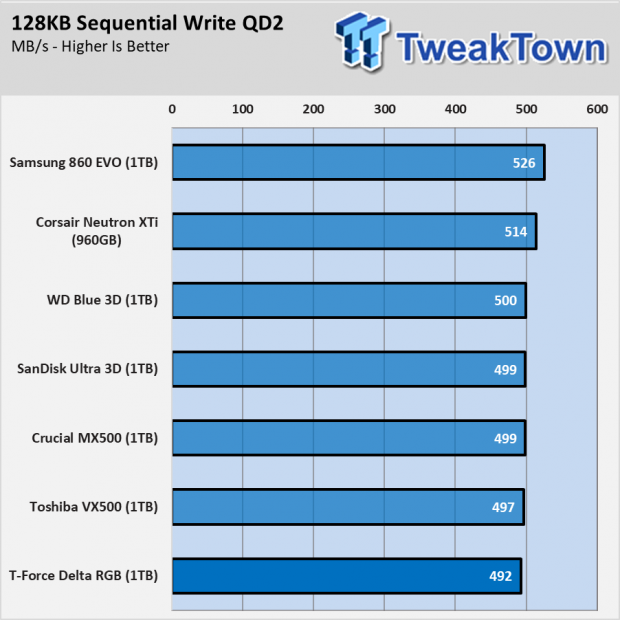 The sequential write performance is also high for all of the drives, but this is where we start to see the 32L flash start to show signs of weakness. At QD2, the Delta RGB falls to the bottom of the performance list. It only trails by a few megabytes per second with 100% data writes. 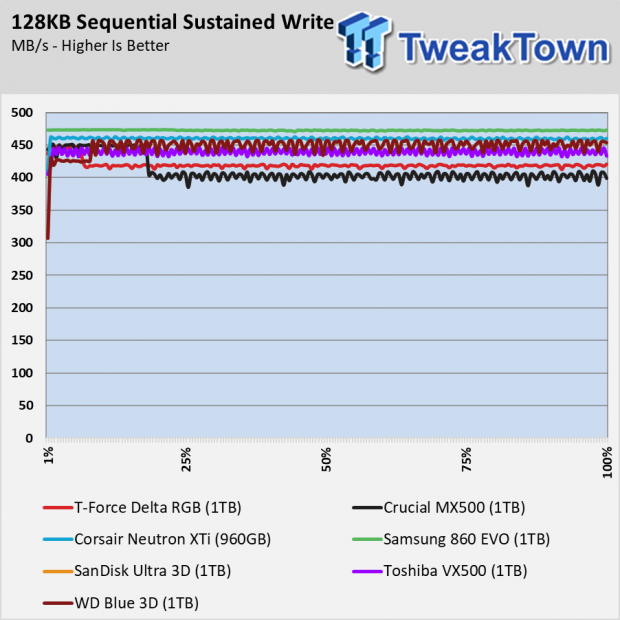 The Delta RGB uses an SLC buffer to tame the TLC by keeping data writes coming in at high speeds. There is a slight performance drop after the SLC buffer. The drop off is much smaller with this product than the other models we tested when 32L TLC first came to market from Micron. 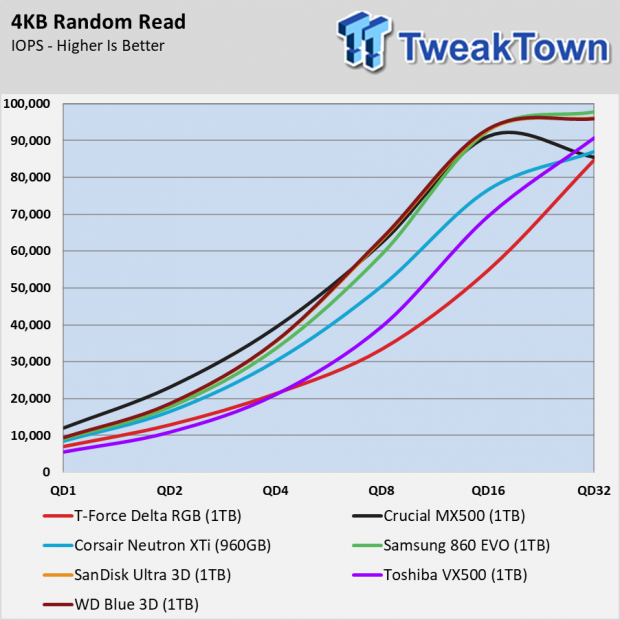 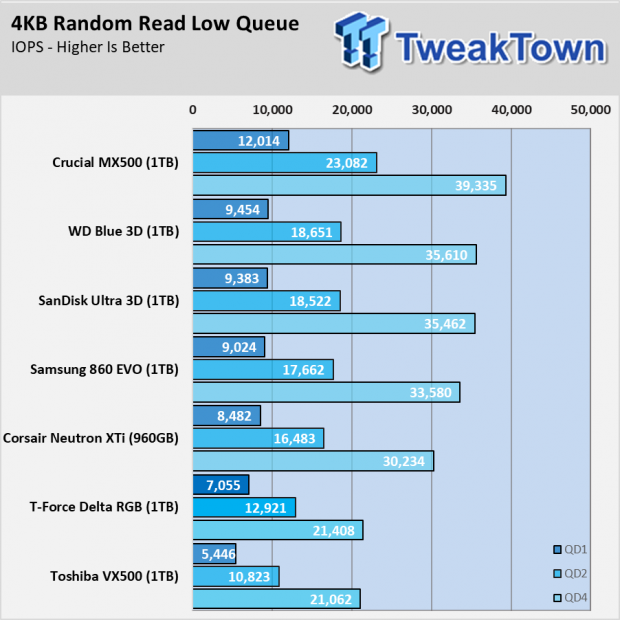 Random read performance has not improved much from the early 32L drives we tested. The Delta RGB only manages 7,000 random read IOPS at QD1. This is one of the most important areas for typical computing purposes. This is where most users perceive performance, how fast windows open when clicked and application load times. 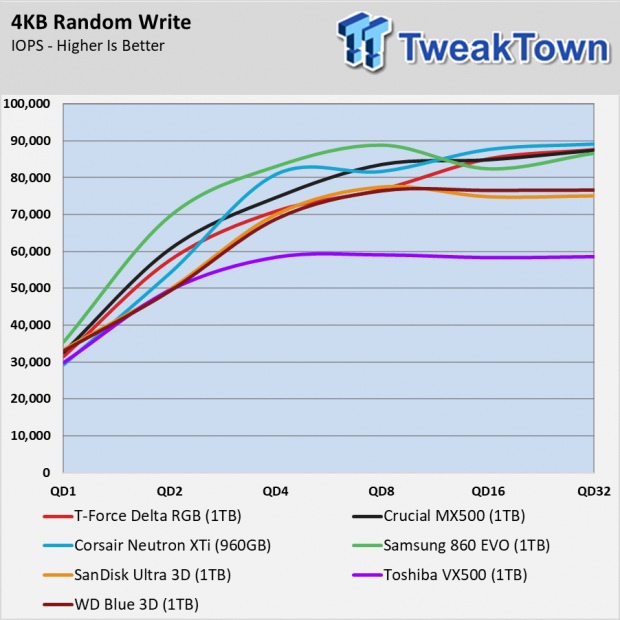 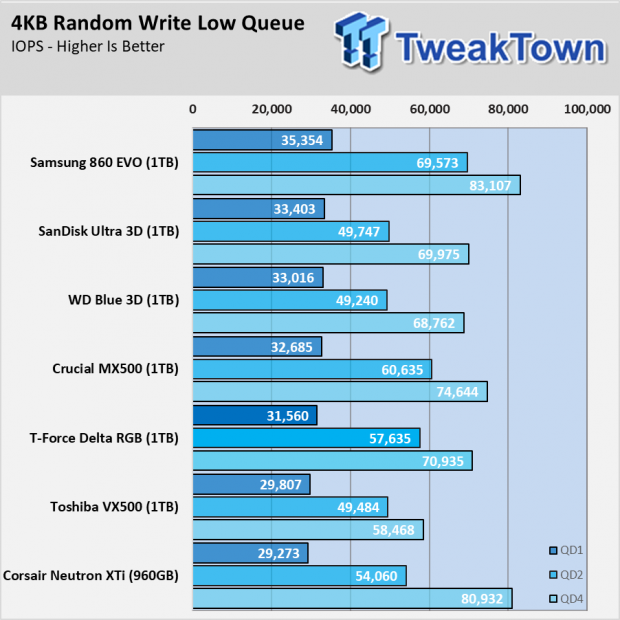 The 1TB Delta RGB does deliver strong random write performance thanks to the SLC buffer. The drive scales as we increase the workload through queue depths. 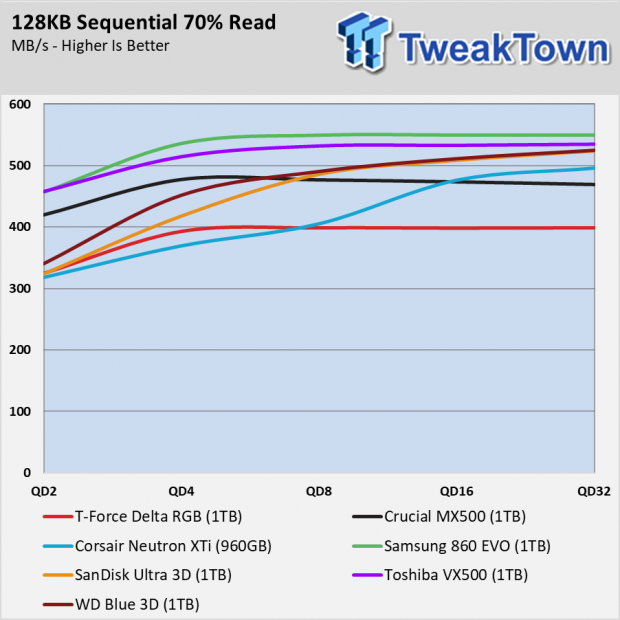 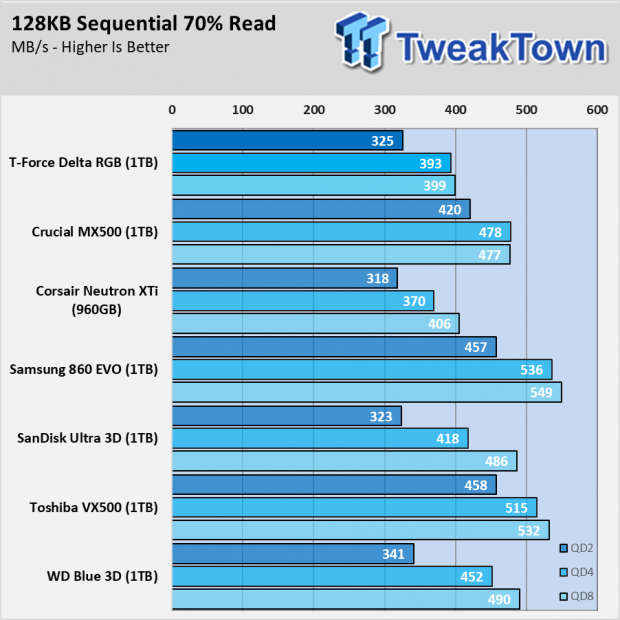 Another area where Micron's 32L memory disappointed us was with mixed workloads. The Delta RGB shows the same issue with the 1TB drive hitting a brick wall at 400 MB/s using a 70% read pattern. 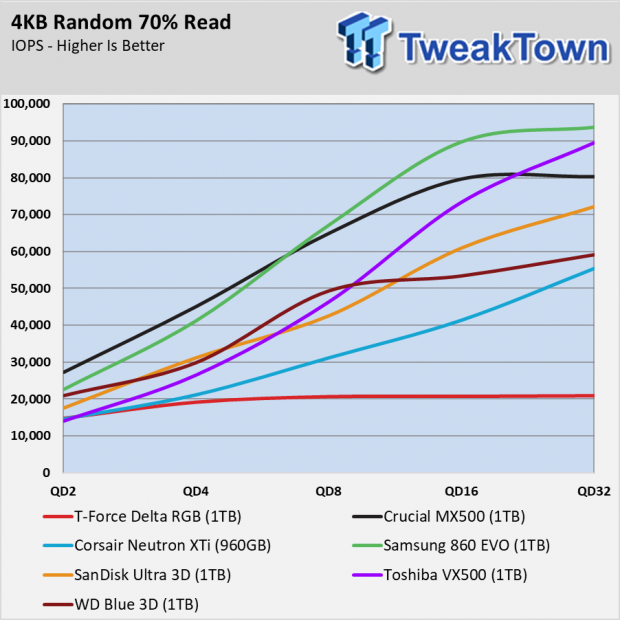 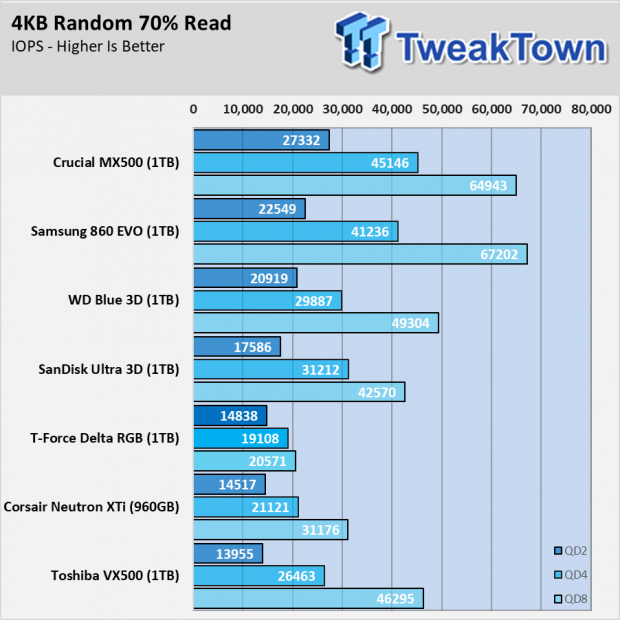 The picture looks much worse with random mixed workloads. The drive starts with nearly 15,000 IOPS at QD2 and barely surpasses 20,000 IOPS when other drives deliver three times as many IOPS. 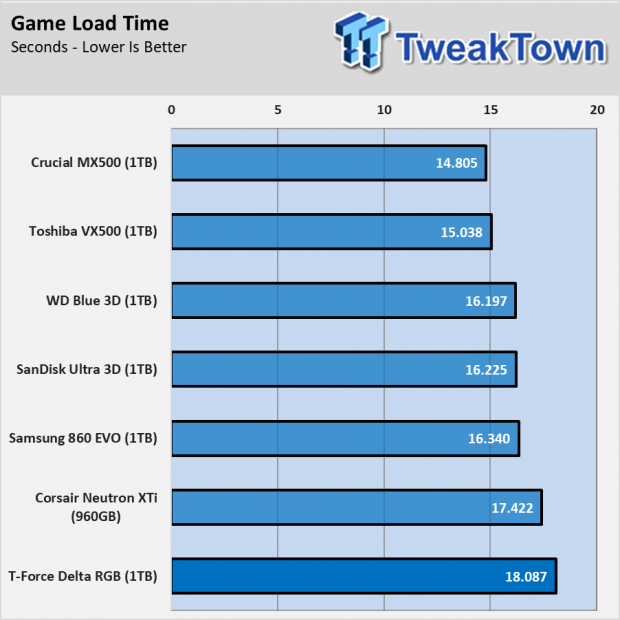 All of the areas of low random performance have ramifications when we move over to real software. The game load test uses the Final Fantasy: Stormblood game to measure the load time of levels through a dedicated benchmark. The 1TB T-Force Delta RGB took just over 18 seconds. That's very close to the same score we recorded just days ago with the Samsung 860 QVO, a drive using 4-bit per cell memory technology. It's also nearly four seconds longer than the Crucial MX500 that costs about the same, but doesn't have the lighting features. 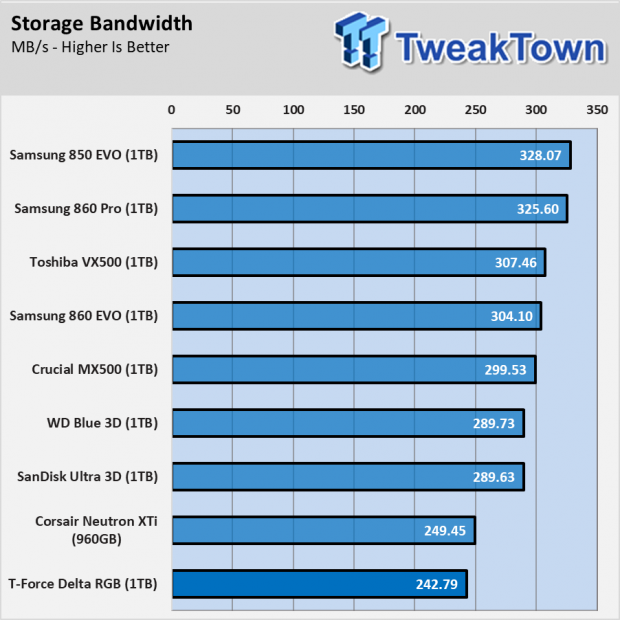 The PCMark 8 Storage Bandwidth test uses nine applications in ten different workloads. We combine the results into an easy to digest average throughput score. The 1TB Delta RGB falls to the bottom of the performance list with this diverse array of comparison products. 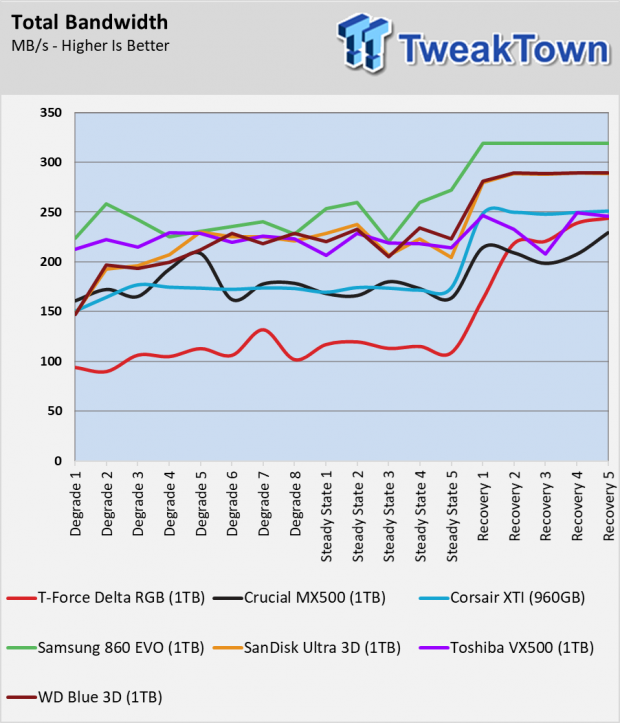 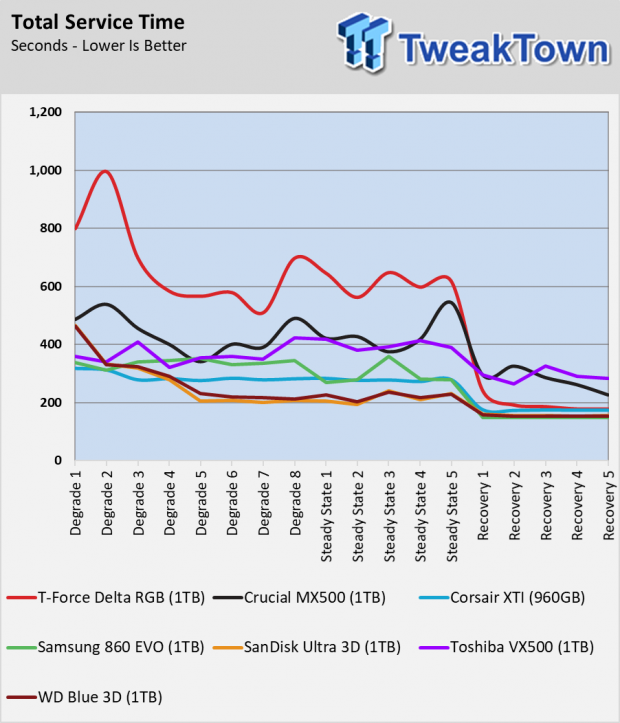 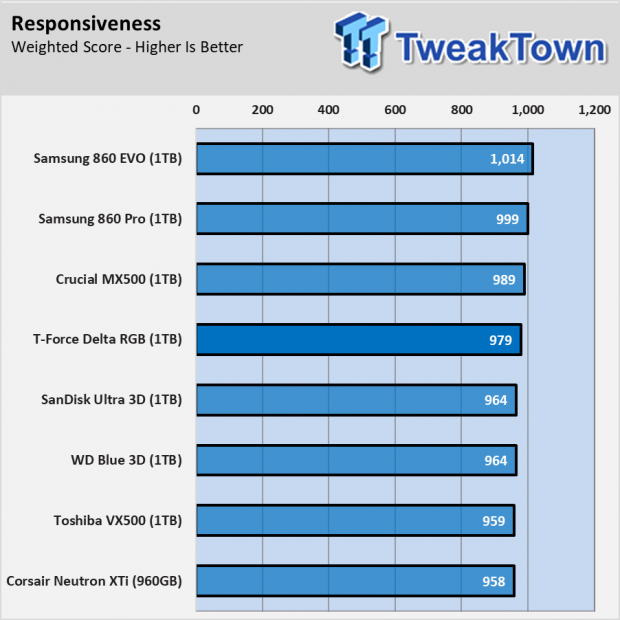 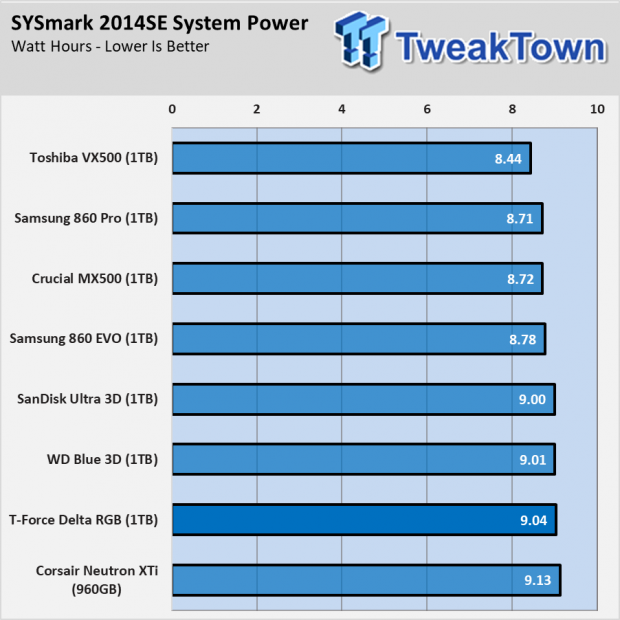 SYSmark mimics a typical day in the office on a PC. The virtual user uses applications from Microsoft, Adobe and other while the software measures the responsiveness for each application and task. The scoring comes from a typical office PC with the OEM version of a Samsung 850 EVO. That system scores an even 1,000.

The 1TB Delta RGB performed better than we expected in this light workload test given the results of the other tests where the workload quickly ran up the latency.

We've conflicted over the Team Group T-Force Delta RGB SSDs. The main appeal of this series is likely gamers and younger PC enthusiasts building a great looking system. Those are also the same users that shopping for products offering an excellent value (performance at a low cost). The Delta RGB series doesn't cost a lot, but it also doesn't give users a strong experience due to below average performance.

Team Group did a very good covering all of the bases with this series on the lighting front. Some motherboards and lighting systems use 5-volt power and others use 12-volt power. Team Group covers both groups with separate products but shoppers will need to know what system they have. Every motherboard I looked at in my office has 12v printed on the board.

Where Team Group really went beyond our expectations is with the third drive in the series that uses simple USB power to light the drive. This version isn't addressable, you can't change the colors, but it does give you a lit SSD that looks nice.

This series delivers performance that you would expect from a mainstream SSD in 2016. The sad part about that is with the flash changed to 64L, the stuff found in most SSDs shipping today, the Delta RGB would have the same components as the Crucial MX500, one of the fastest consumer SATA SSDs available today. We assume Team Group picked up the remaining 32L flash at a steep discount. That would work in a drive sold to system integrators or a low-cost entry-level model. When the drive literally has a neon-colored target on its back the drive should perform as well as it looks.