The HighPoint SSD6540 kit is so fast that it broke a set of my favorite benchmark charts. 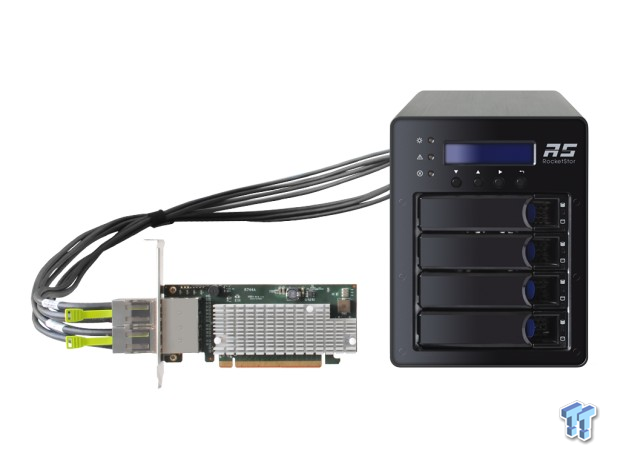 SSD is in the name, but the SSD6540 isn't actually an SSD at all. The system is the first NVMe over cable external enclosure, a DAS or Direct-Attached Storage. A DAS can technically be anything from a thumb drive to a portable hard disk drive. We typically reserve the name for devices that have a special attribute, like high-speed Thunderbolt 3 connectivity, or a large box that holds several drives.

The SSD6540 isn't either of those. It features four times the data bandwidth of Thunderbolt 3. It's not a gargantuan box either like the LaCie 12big. The system comprises of a PCIe 3.0 x16 add-in card, 2 highly insulated cables, and a small black box to hold your U.2 SSDs.

Ah yes, U.2 SSDs. The form-factor in our dreams. To date, only Intel released consumer-grade SSDs in the U.2 form factor. The first was the SSD 750 Series. The second is what we used for this review, the Intel Optane SSD 900P, the fastest consumer storage in existence. 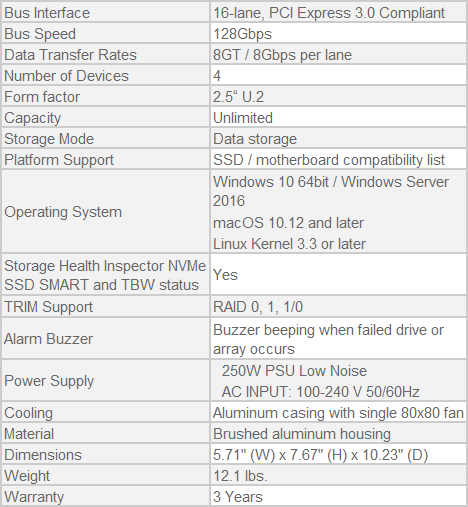 There are three major parts to the HighPoint SSD6540 system and it starts with the add-in card. The card uses a PLX PEX8747 bridge to send four PCI Express 3.0 x4 through the included 1 meter cables. The combination is virtually lossless and passes the full 128Gbps bandwidth. That is the same bandwidth of four high-speed NVMe SSDs.

On the other end of the cable is a brush aluminum enclosure with a 250-watt power supply, cooling and display. The intelligent display allows you to monitor and configure the system, or you can use the included graphical user interface software.

HighPoint built drives for Windows, Linux and MacOS. Installation is easier than adding a video card to your system. To get the full bandwidth, you need a system that can provide the card with all sixteen lanes.

We found the HighPoint SSD6540 on B&H for $999. The system includes a 3-year warranty and comes in a thick box with form-fitting foam to secure the adapter and external enclosure.

HighPoint ships the system with 1 meter SFF-8644 cables but offers 2-meter cables as an optional purchase. 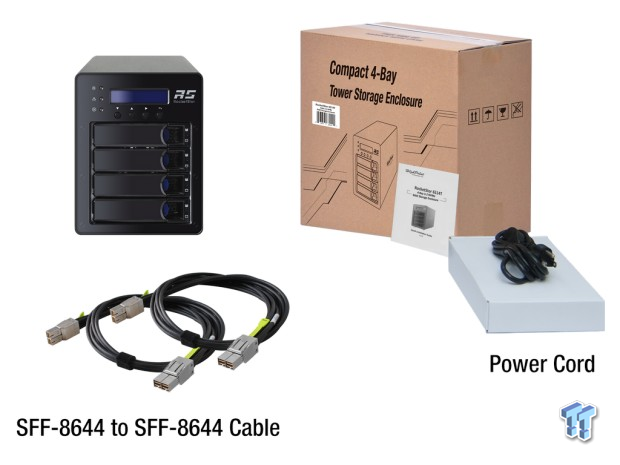 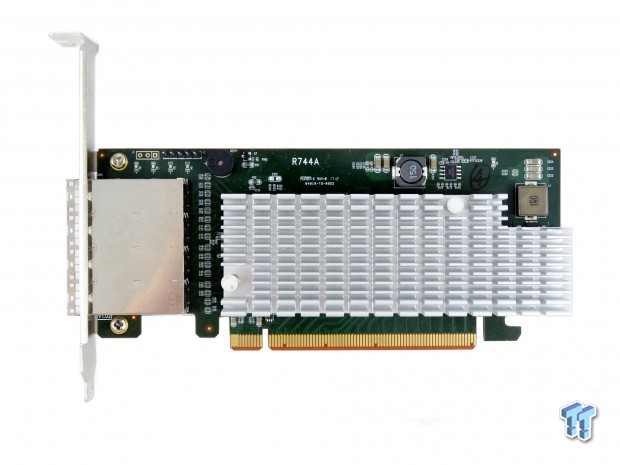 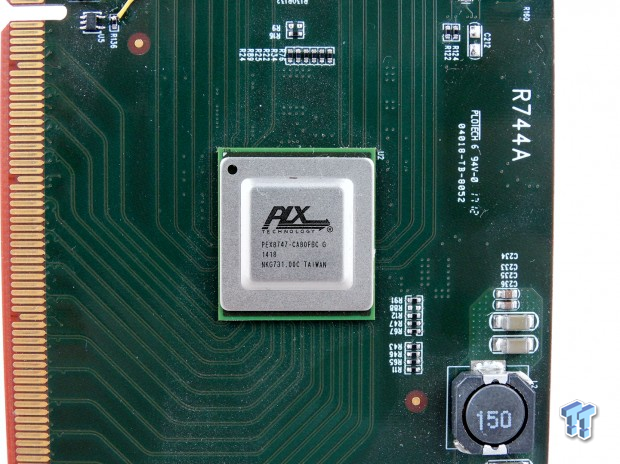 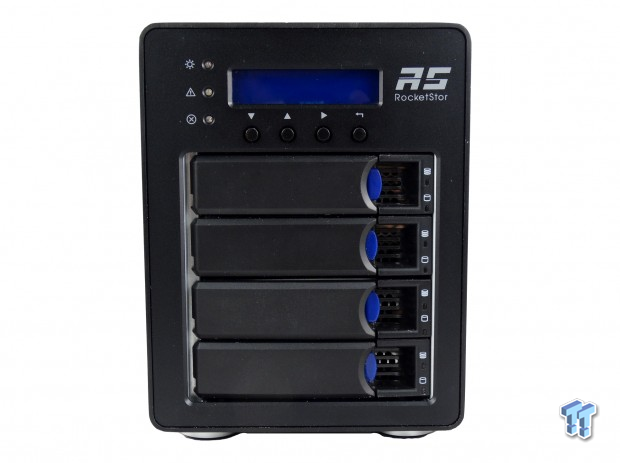 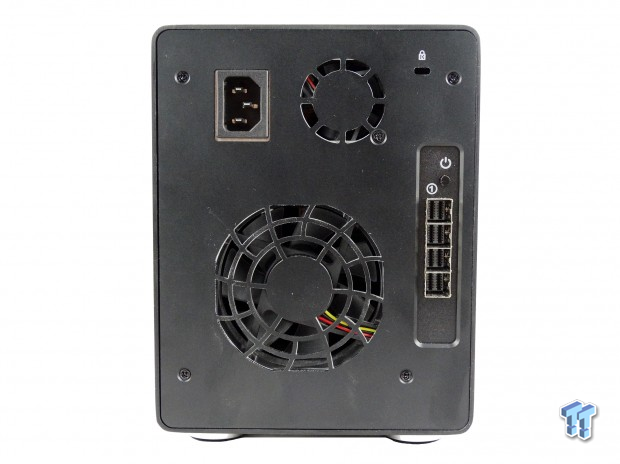 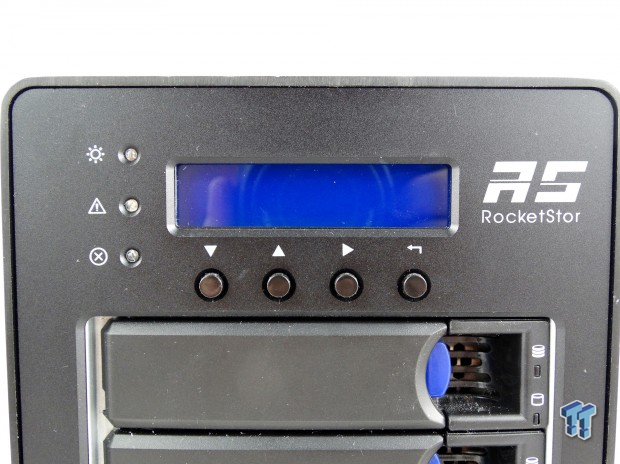 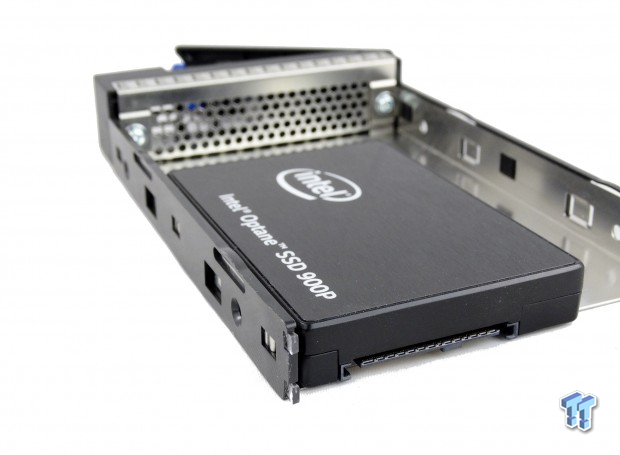 Outside of the SSDs, the HighPoint system is complete. You will need a PC with a full PCIe 3.0 x16 slot available and all of the bandwidth. Intel's X299 and X99 systems work really well as does AMD's Threadripper. Consumer platforms like Z370 will not work with a discrete video card installed. The platform will only utilize eight lanes in the second long PCIe slot with two cards installed.

The enclosure has a fan, but the system runs cool and quiet even under heavy workloads with the drives we chose for this test.

We loaded the system with four 280GB Intel Optane SSD 900P drives. The software was easy to configure and provided enough options to tune the storage array for the type of data we are working with.

In hindsight, the Optane SSDs were not the best option for large block size sequential workloads. The drives perform well, but other products can deliver higher sequential read and write performance. That said, if your application is data dependent, Optane technology delivers the lowest transaction time in the industry.

For our test today, we configured the HighPoint SSD6540 system in RAID 0. We ran two stripe sizes, 16KB and 512KB to see if the larger stripe delivered higher sequential performance.

There really isn't anything on the market quite like the SSD6540 enclosure. There are a number of Thunderbolt 3 systems, like the LaCie 12big, but they only provide a quarter of the bandwidth to the external enclose. The SSD6540 is more like a PCIe-attached storage solution. The company makes an add-in card version that allows you to install M.2 drives and keep the array inside the system.

We reached for our LaCie 12big and 8big systems to compare to the HighPoint SSD6540. These systems utilize Thunderbolt technology and hard disk drives to accelerate direct-attached storage through RAID. 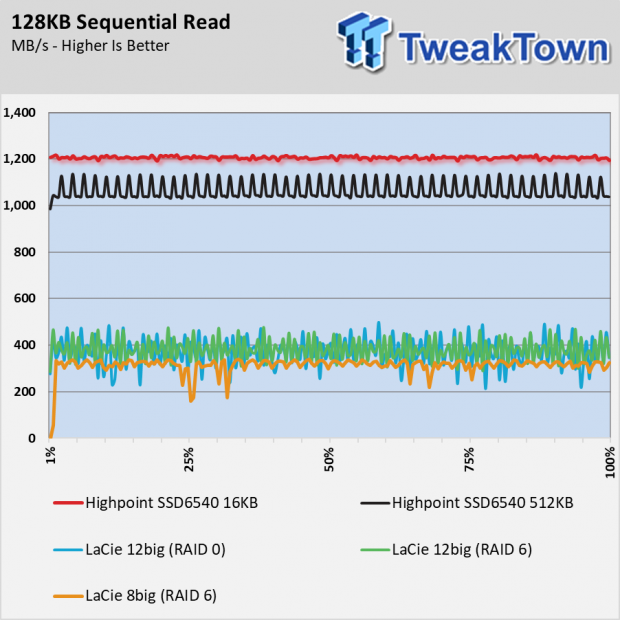 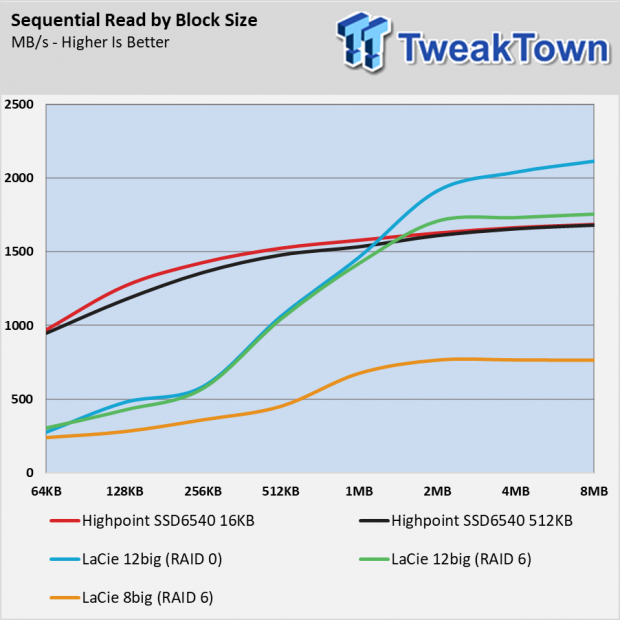 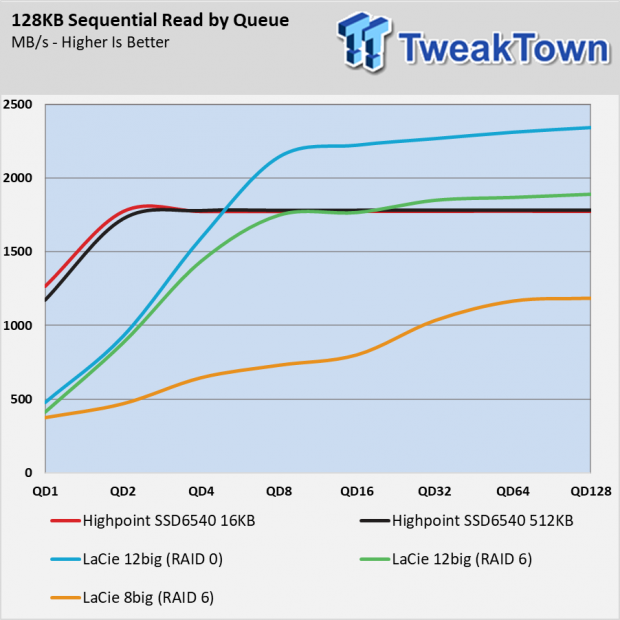 We have three difference sequential read measurements. The first is a line chart using a single stream coming from the target appliances. We tested the SSD6540 with two stripe sizes, 16KB and 512KB. The 16KB delivers a more consistent read from the HighPoint with Optane 900P SSDs. 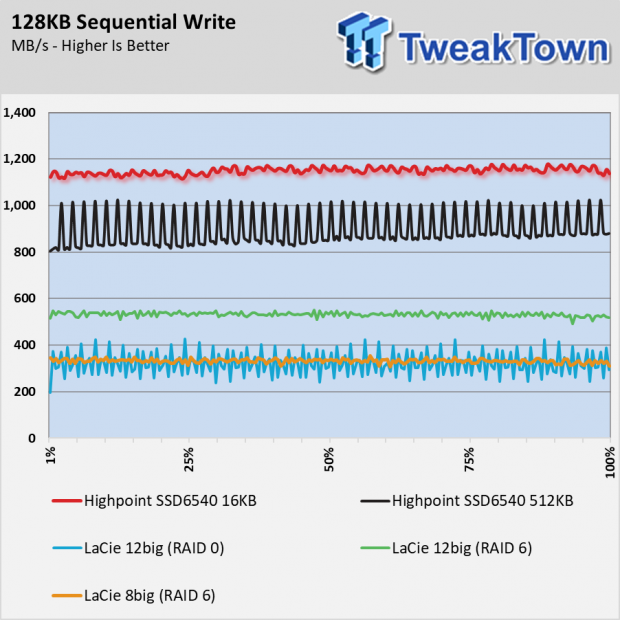 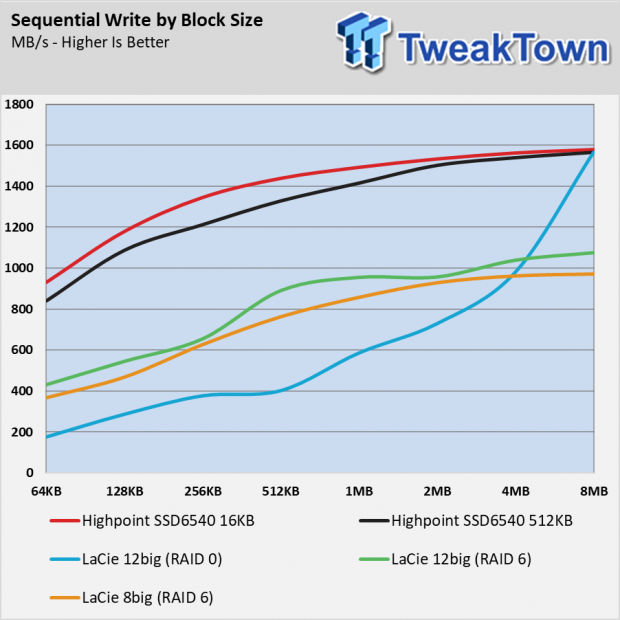 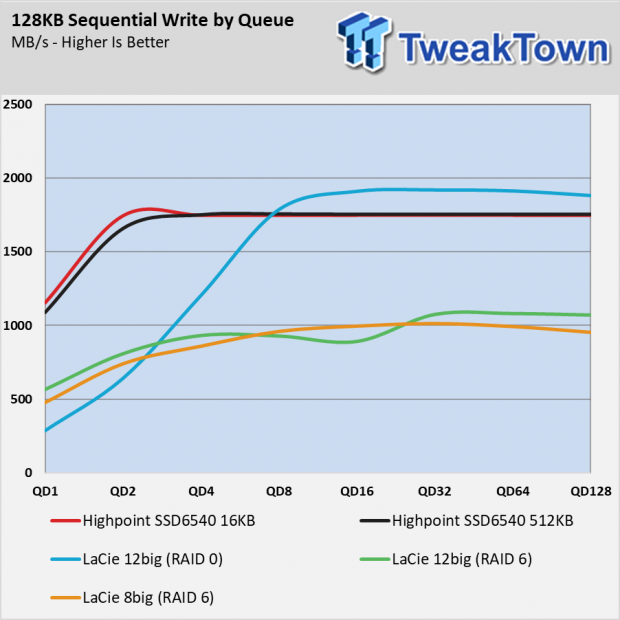 We use the same three measurements for the sequential write tests. The first with a single queue depth and worker write across the entire user range of the storage. The SSD6540 system with a 16KB stripe size is more consistent than with a 512KB array stripe. The 16KB stripe is also faster.

The block size test shows the Optane array with the HighPoint external system outperforms the three LaCie disk-based arrays. We expected to see similar results in the read tests but the LaCie systems have a cache in place to increase performance. The cache isn't as effective when writing data to the arrays.

In the third test, we write 128KB data sequentially to the arrays. The Optane SSDs prove again to deliver superior low queue depth performance and that shouldn't change in any of the synthetic tests today. 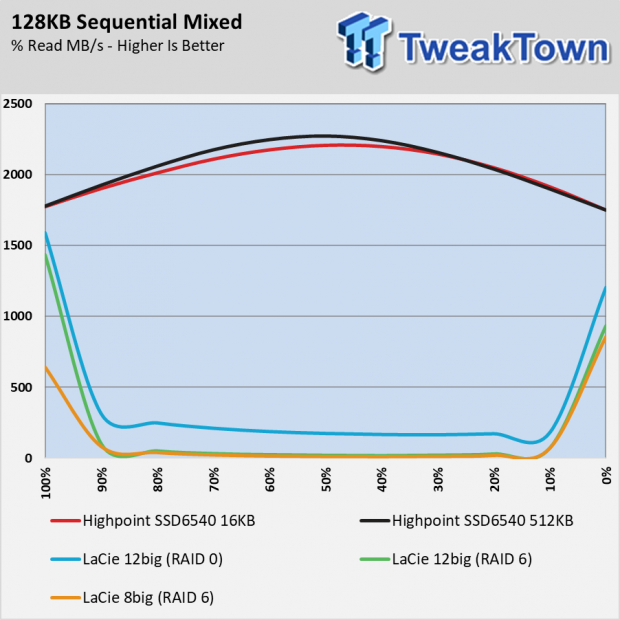 Before we analyze the sequential mixed workload performance, we want to talk about what this test actually does. In your creative workflow, you may simply read data, write data or do both. Let's say you read two video streams from a storage device with Adobe Premier and write a new stream back to the array. If the streams are all at the same bit rate, which would be a 66% read workload. We call these mixed workloads. Hard drives and even SATA SSDs often have a difficult time reading and writing data at the same time. SATA simply can't read and write at the same time, so native command queuing will prioritize the data. Anytime you have the data waiting, you introduce latency.

On the chart, we see the mixed workloads latency slowing performance on the LaCie systems, but the Optane array with NVMe over the PCIe bus increases performance as you ask the system to manage more IO tasks.

In our Adobe Premier example, you may have the fastest, highest core count processor with a dedicated GPU to accelerate rendering but your storage can limit the performance of the system. This is the exact type of workflow LaCie's Big series is for, but without a massive cache, these systems are not comparable to the HighPoint SSD6540. It important to remember we didn't use SSDs optimized for high sequential performance at high queue depths. In an array with other drives, the sequential performance would likely be much higher. 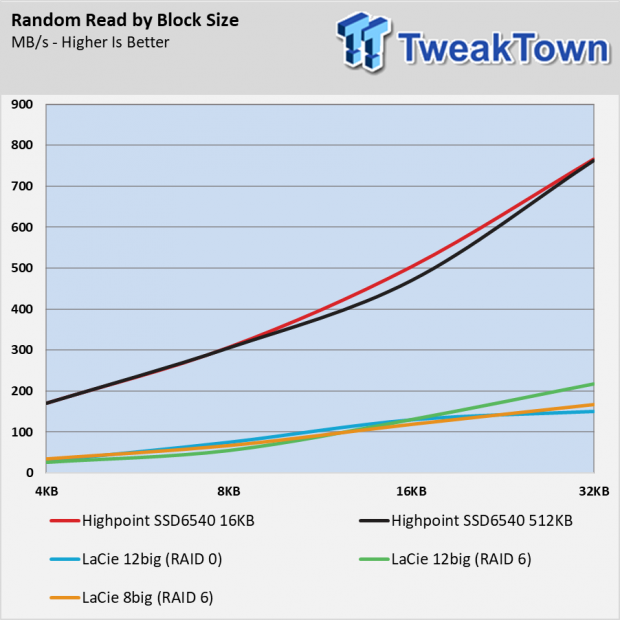 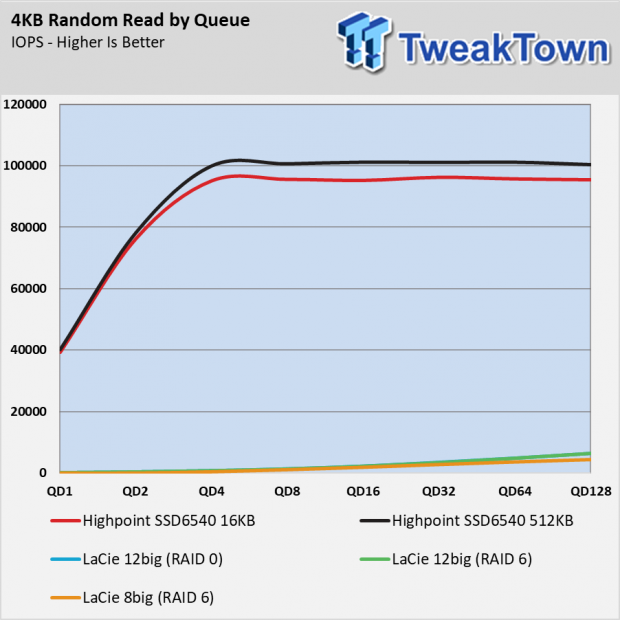 If your workflow includes running applications directly from the DAS, nothing is better than 3D XPoint found in Optane products. The two charts in the random read test are similar to those found above except we use smaller block sizes in the first and full random 4KB in the second. 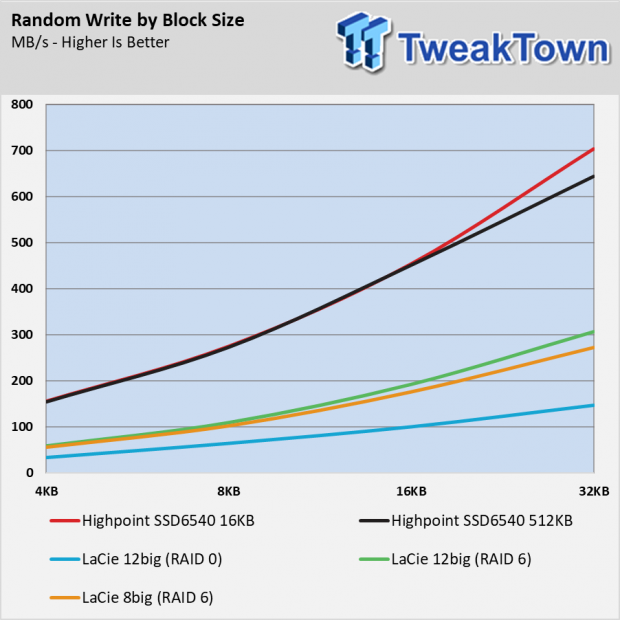 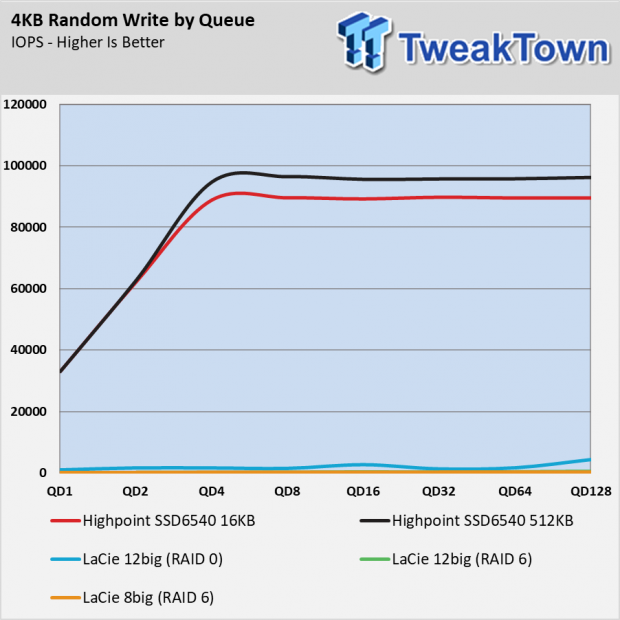 The random write test results with the SSD6540 dwarf the LaCie 12big and 8big results. To be fair, these systems are a better fit for sequential workloads, but you can choose components, and tune the HighPoint kit to get favorable random performance as well. 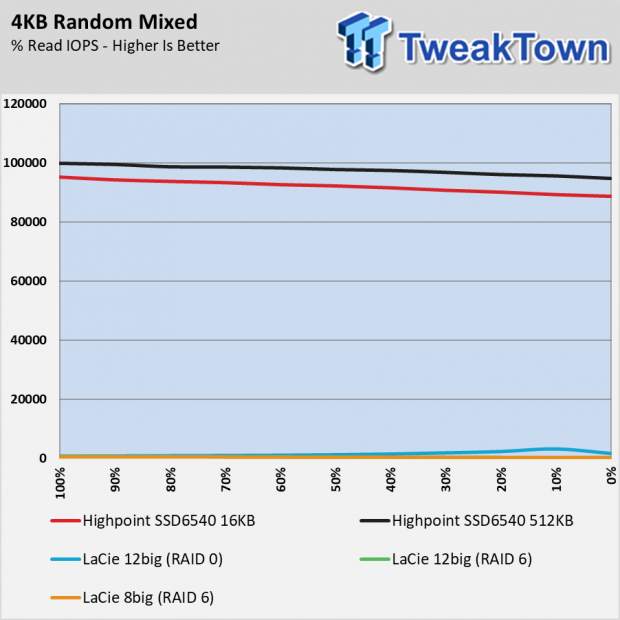 Meltdown and other vulnerability fixes have limited random performance with flash and 3D XPoint with a single CPU worker, but it is still possible to reach very high levels. Mixing random reads and writes are hell on hard disk drives. Generally, storage systems must employ large DRAM buffers to meet acceptable performance levels, but it's difficult to compete with flash and 3D XPoint media for disk-based systems. 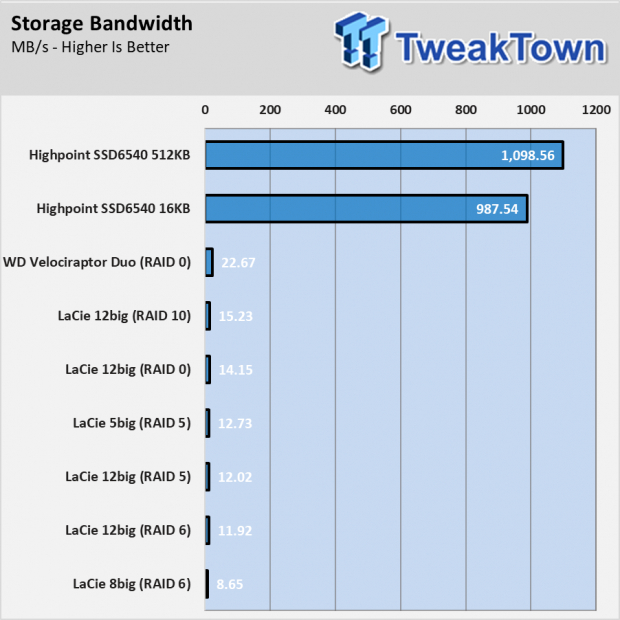 HighPoint has a very powerful direct-attached system for users in need of faster and more spacious storage. HighPoint's other NVMe RAID devices cut into the number of users for the SSD6540 system leaving this a product that only makes economic sense for a few. Disk availability can also be an issue.

On a pure performance basis, the HighPoint SSD6540 sits at the top without a rival. There is a reason for that, though. Before we get into the fine details let's first talk about the storage capabilities and fully understand where this system has an advantage.

The SSD6540 essentially moves 128Gbps of PCIe bandwidth to an external enclosure. This is four times the bandwidth of Thunderbolt 3's data capabilities (32Gbps of data bandwidth for Thunderbolt 3 and 8Gbps for video unassociated with the data path, i.e. from a video card but sent over the same cable).

Most NVMe SSDs utilize a PCIe 3.0 x4 interface for 32Gbps, the same bandwidth for Thunderbolt 3. That's why the PCIe add-in card from the HighPoint SSD6540 uses a PCIe 3.0 x16 lane slot and makes use of the full available bandwidth. The system is more or less the same as adding four NVMe SSDs to your system without placing the drives inside the box.

HighPoint sells other products that utilize the same 128Gbps bandwidth but operate inside the system. The SSD7101A-1 fits four M.2 SSDs in a single add-in card, but the largest M.2 SSD widely available is only the 2TB. That limits the SSD7101A-1 to 8TB. The SSD7120 features four U.2 ports if you are willing to install the drives in your host system and have room for the drives. Both of these add-in cards sell for less than $400 compared to the $1000 needed to build an external system with the SSD6540 (prices without drives). Moving drives outside of the host system carries a $600 premium.

Currently, there are very few U.2 SSDs available to retail shoppers. M.2 SSDs flourish, but the market largely ignored U.2 for consumer storage other than Intel pushing the specification with 2 retail series, 750 and 900P/905P. Both are limited in capacity to roughly 1TB at the time of writing.

Intel and others sell larger capacity U.2 drives but you really have to seek them out. The Intel DCP4510 comes in a massive 8TB size but each drive costs $5,083 at Newegg at the time of writing. Micron and Samsung U.2 drives are more elusive from traditional channels, but we often spot them on EBay from gray market sellers either dumping new old stock (a new drive that is in the box, but an older or unused model) or a server pull (used but with flash life left).

If you have a requirement to move the storage outside of the host, yet still keep the highest performance possible, the HighPoint SSD6540 is the only option available.