We had our Phison PS5012-E12 reference design NVMe SSD for a few months before publishing the first preview article that you can read here. When we published the article, the company already improved the E12 firmware and was ready to show updated performance at Flash Memory Summit. Today we're testing the 11.0 reference design firmware to see the improvement and to get a better understanding of when the timing for retail availability. 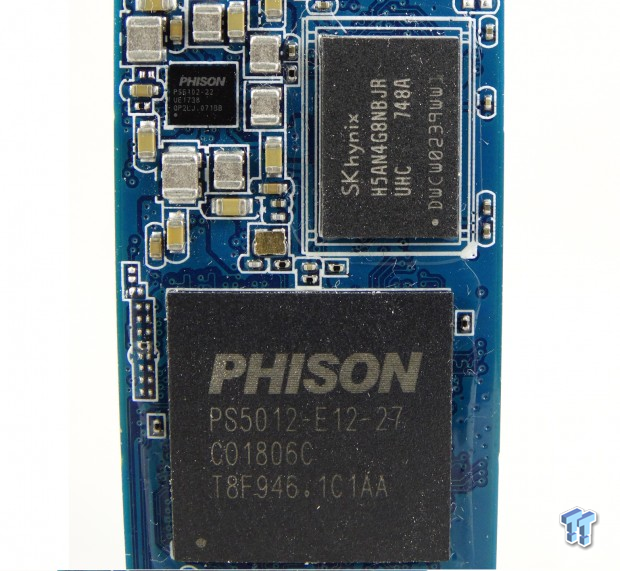 The performance you see today isn't the final representation of retail products that will soon follow. Phison plans to release one more performance-focused firmware before turning everything over to customers to validate. I suspect we will see retail SSDs based on the E12 architecture in the next month from companies that bring Phison-based products to market early, like MyDigitalSSD.

A number of companies utilize Phison controllers and they all need a replacement for the E7-based drives that had so much success in 2017. In 2018, Phison's partners released E8-based SSDs, a mainstream 4-channel controller but low Toshiba 15nm MLC flash availability left a void in the high-performance tier for these companies' product stack. The E12 will be a true replacement for the E7 and put these companies back in the premium SSD market.

We will likely see MyDigitalSSD release an E12-based SSD first. The company runs lean and efficient so new product introductions can happen in what seems like a weekend with most of the prep work taking place weeks in advance. Corsair, Patriot, and many of the others take a little longer but they also include more value-add features like toolbox software, more complex packaging, and so on.

The new company in the Phison family has the ability to shake up all of the others. Inland Professional ships Phison controllers in very low cost SATA and NVMe products. The SATA III drive we reviewed in my return article to TweakTown was one of the bestselling SSDs on Amazon, and the E8-based NVMe model isn't far behind. Both sell for less than any comparable model from the other Phison partners. It will be interesting to see if they can keep the momentum. 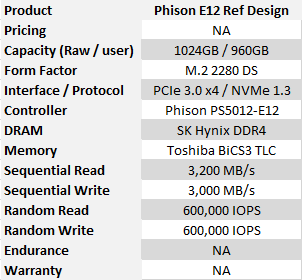 Phison has a generic specification sheet for the PS5012-E12 reference design. This is kind of like a target as the series moves through development. We often see the numbers increase when companies build retail products.

So far we've only seen the E12 paired with 64-layer BiCS FLASH from Toshiba. This is Toggle2 media and we suspect the first retail SSDs with the controller will use the same. Things will get more interesting with Toshiba's first Toggle3 flash, the 96-layer BiCS4 variant. Toggle3 increase the memory's bus speed to 800 MT/s. 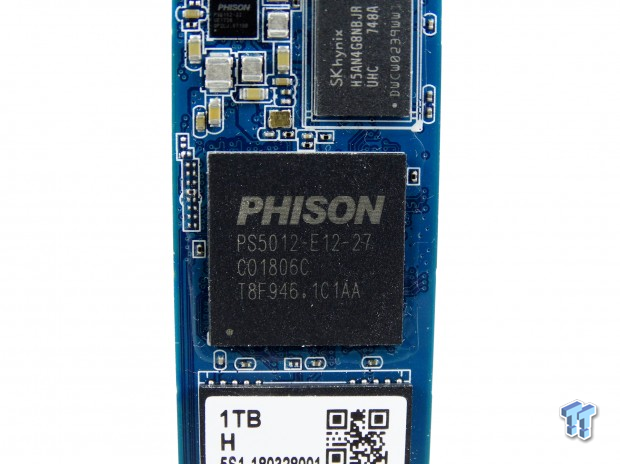 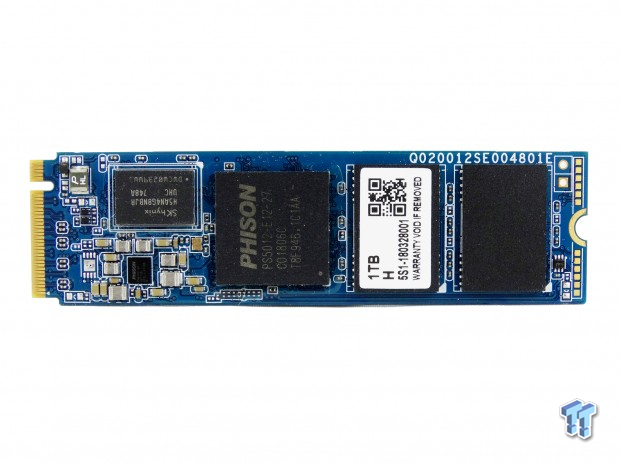 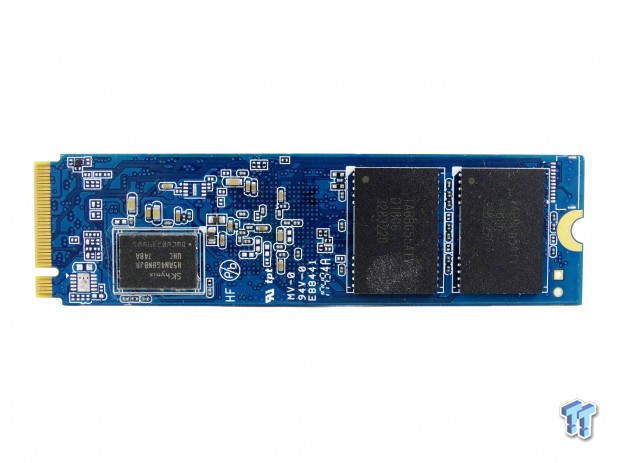 We used the same drive in our test last month. While in San Jose for FMS 2018, Phison took the drive back to the office to flash with the latest 11.0 firmware. On the component side, this drive features the PS5012-E12 8-channel controller and Toshiba BiCS FLASH 64-layer TLC memory. It is a 1TB drive, 1024GB but after overprovisioning users get 960GB. The reserve space allows the controller to manage data more efficiently to keep performance high under heavy workloads. 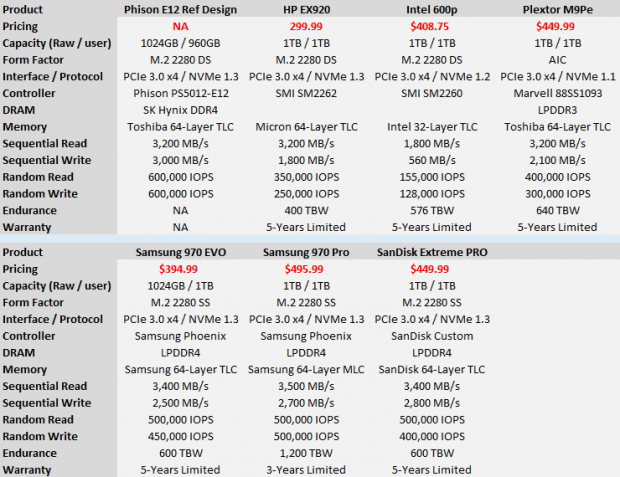 Today we're comparing the latest E12 to the most popular high-performance NVMe SSDs shipping today. This includes the HP EX920 and Adata SX8200 both using the SMI SM2262 controller and Micron 64 L TLC. The Plextor M9Pe in the add-in card configuration with an older Marvell controller paired with Toshiba 64L TLC. The SanDisk Extreme Pro NVMe with a custom controller, the first from SanDisk and finally the Samsung 970 Pro and EVO. The 970 Pro is the only product in this group with 2-bit per cell MLC flash. 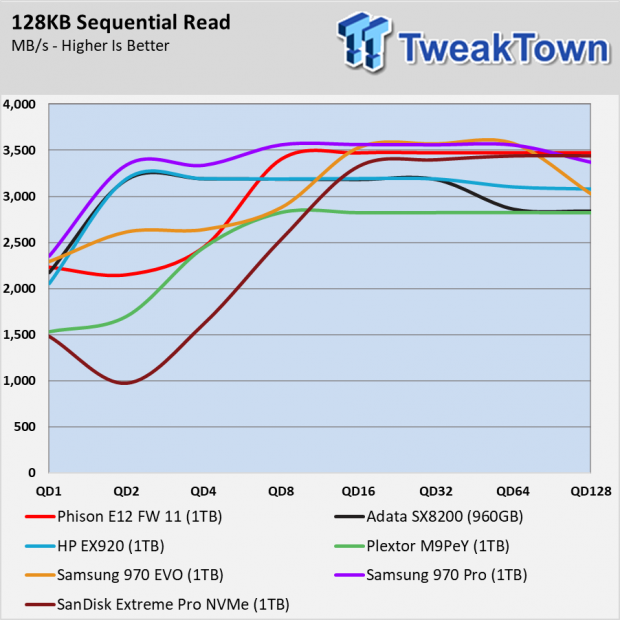 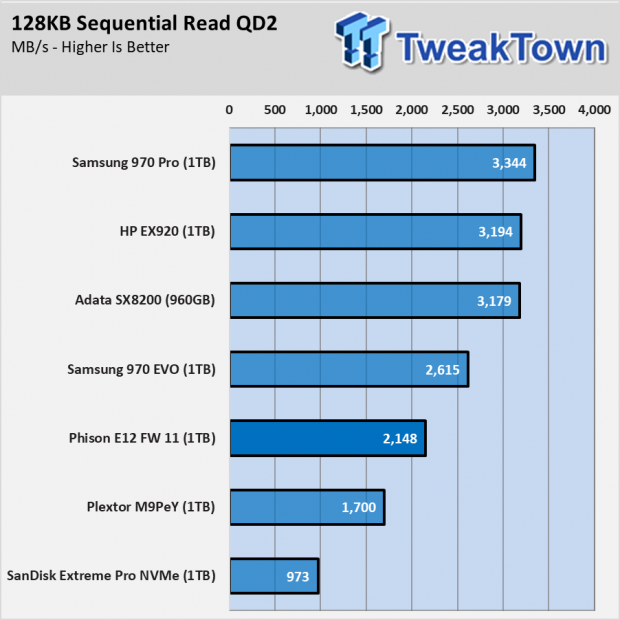 The Phison E12 drives we've tested so far have a strong dip at QD2 and 4 in our testing. The SanDisk and Western Digital NVMe SSDs have the same issues but only when we run the fully automated suite. The latest version of the E12 has very high QD1 sequential read performance, that only trails the two Samsung 970 Series SSDs by less than 100 MB/s. 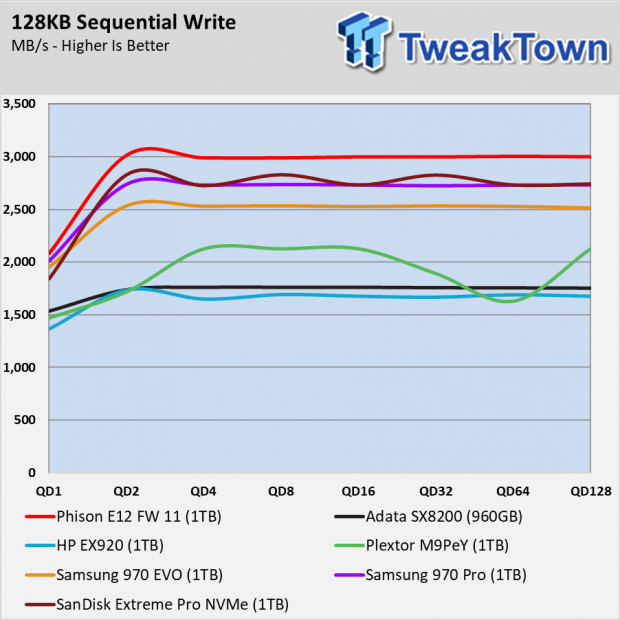 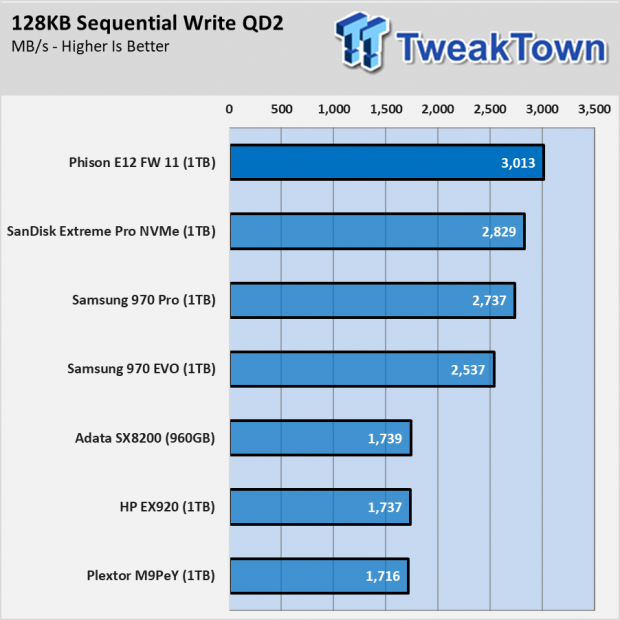 The E12's sequential write performance is amazing. We never thought a true 3,000 MB/s (3GB/s) run was even possible with TLC memory. The E12 hits the high mark and even outperforms the Samsung 970 Pro with MLC flash. 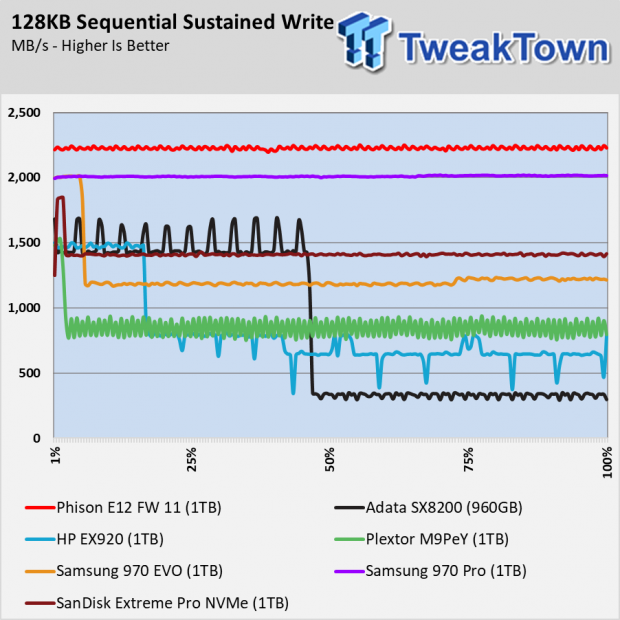 There is very little performance loss writing to the entire drive thanks to the new firmware and overprovisioned space held in reserve to manage the background activities. Again we see the E12 outpacing the 970 Pro. 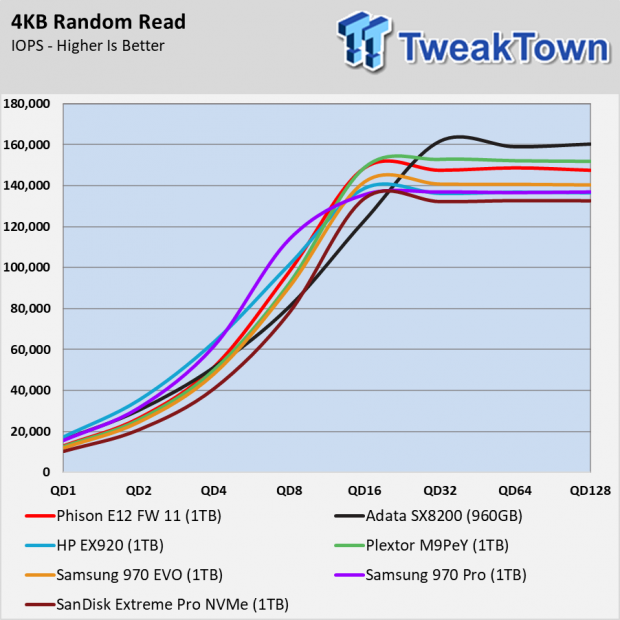 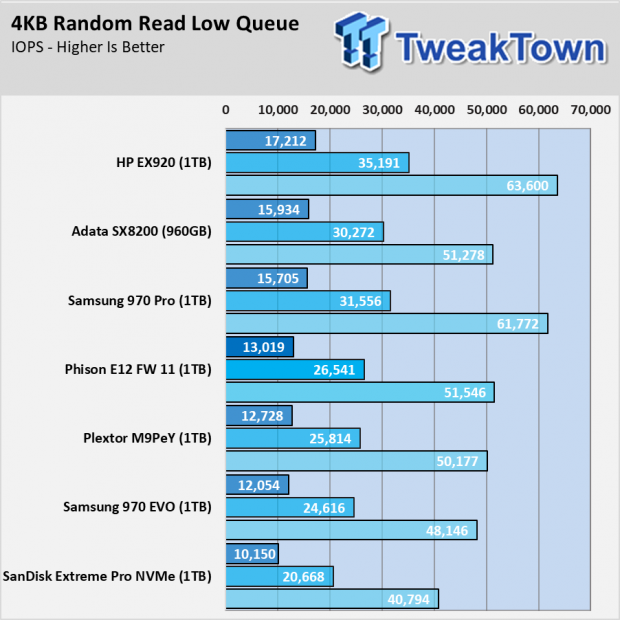 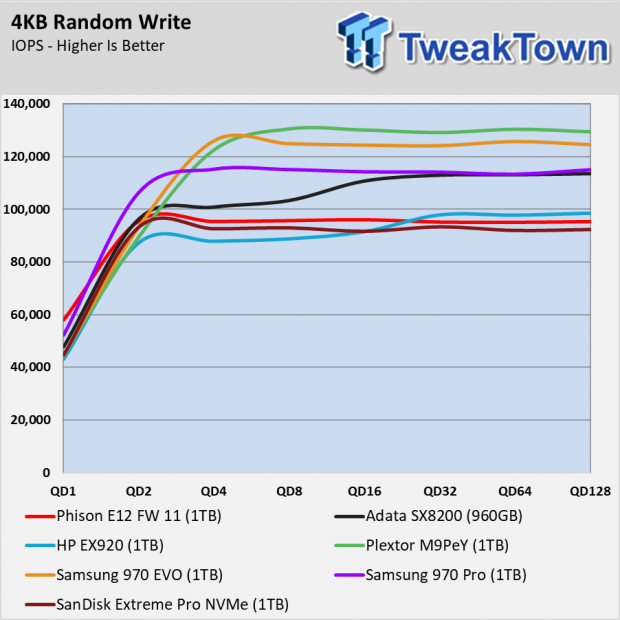 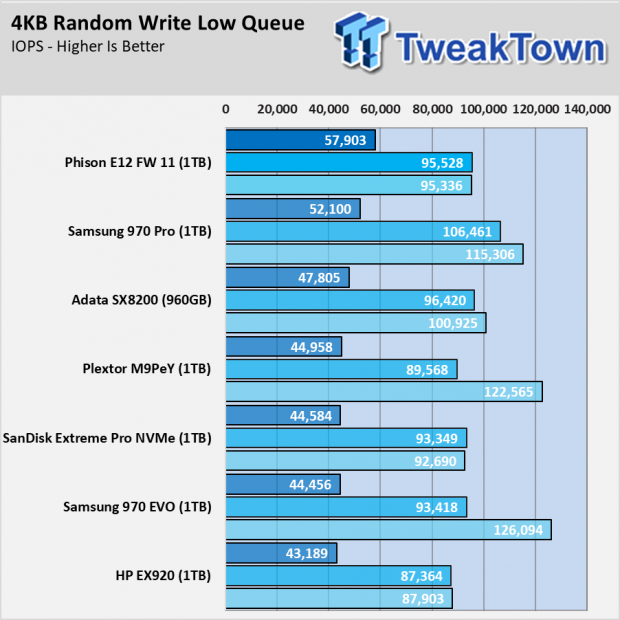 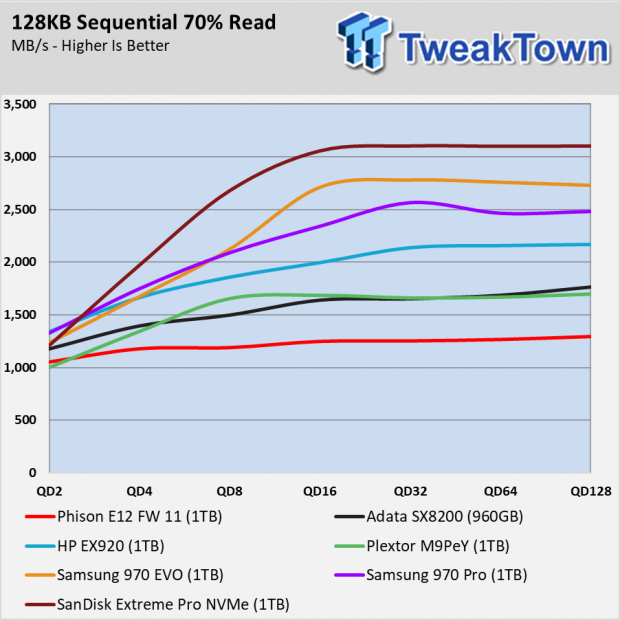 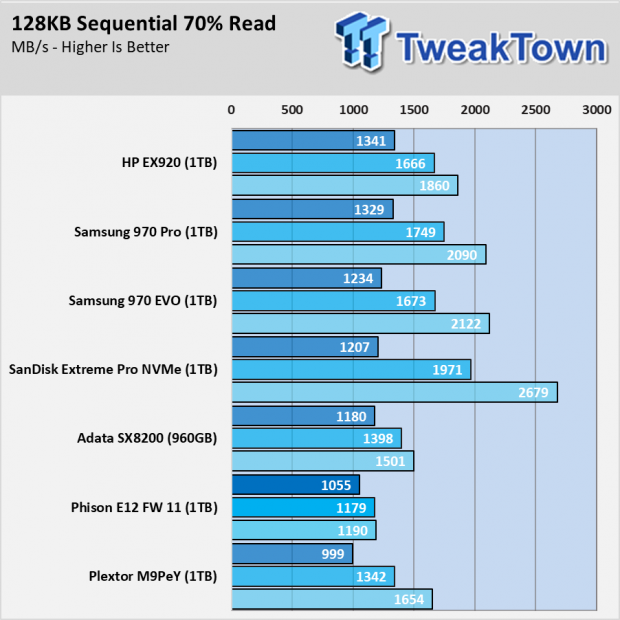 The sequential mixed workload results are the least favorable of the synthetic tests. Mixed workload optimizations, as well as lower level power stages, are usually the last to optimize in the firmware development process. 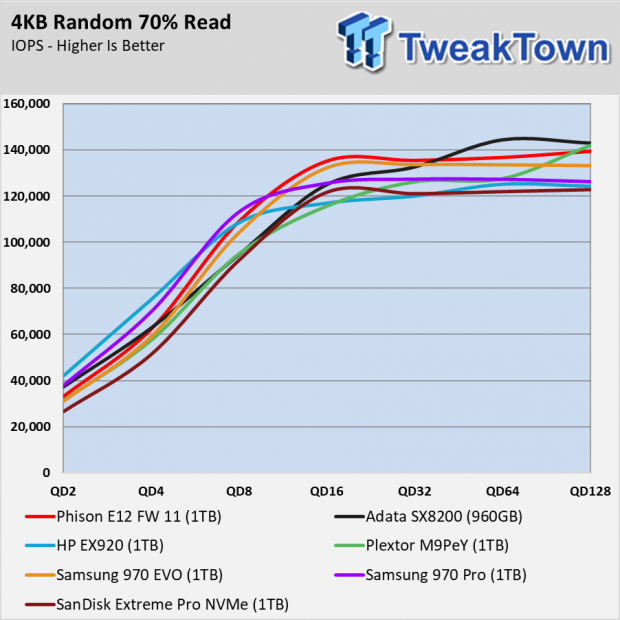 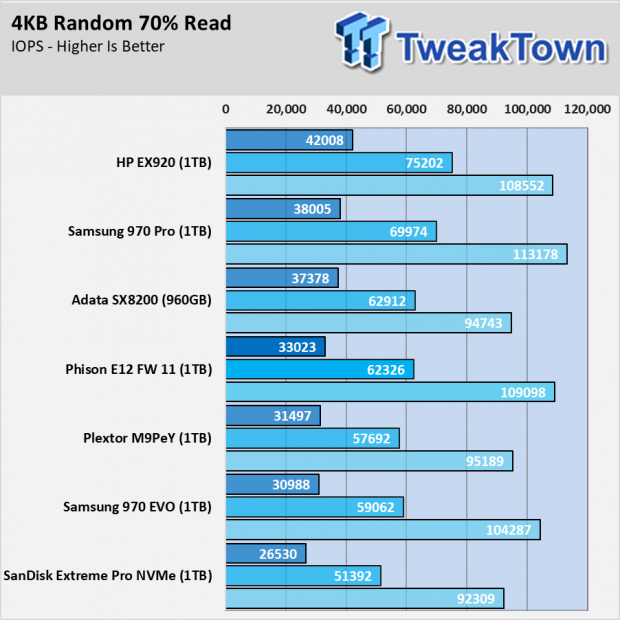 The random mixed workload results look strong. Phison has come a long way in random performance. The push to build upgrade market components alongside OEM components has benefited both programs in reliability and performance. 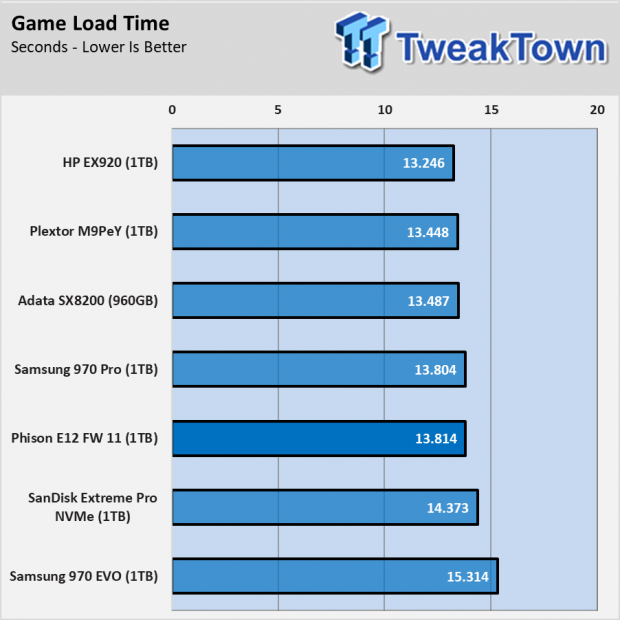 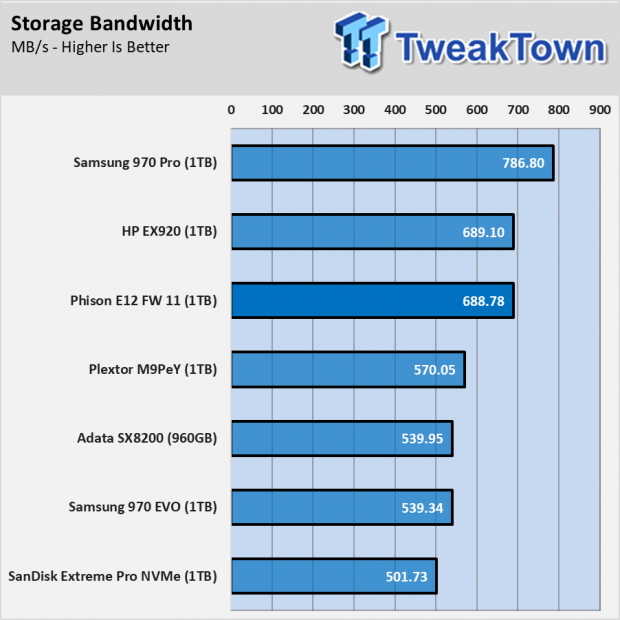 The PCMark 8 Standard Storage Test uses ten application traces from software many of us run every day, like Word, Excel, and Photoshop. The updated E12 runs neck and neck with the HP EX920, one of the drives we currently recommend for our enthusiast readers. 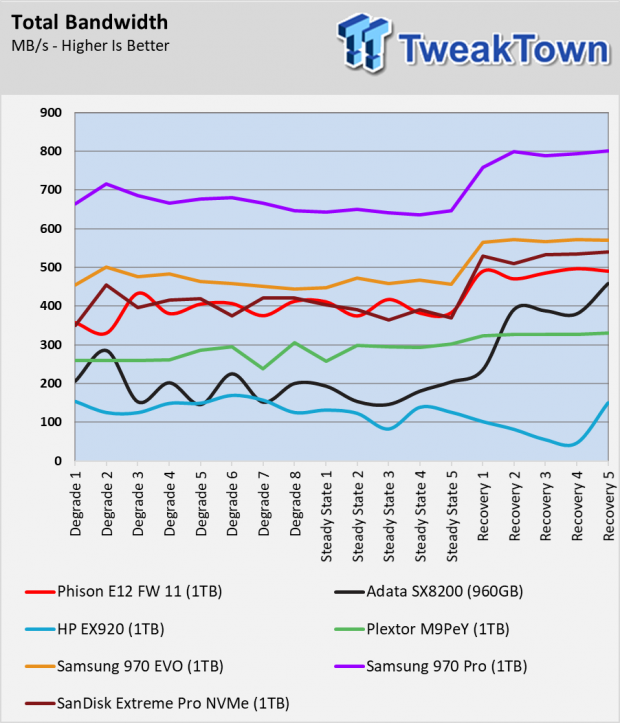 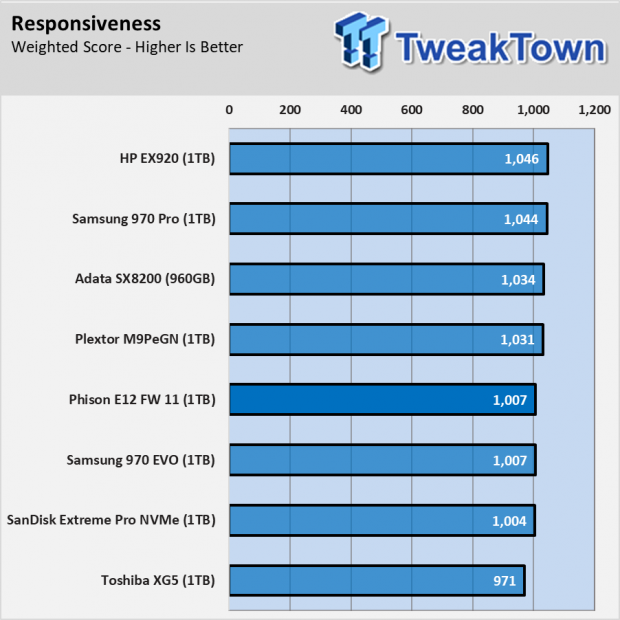 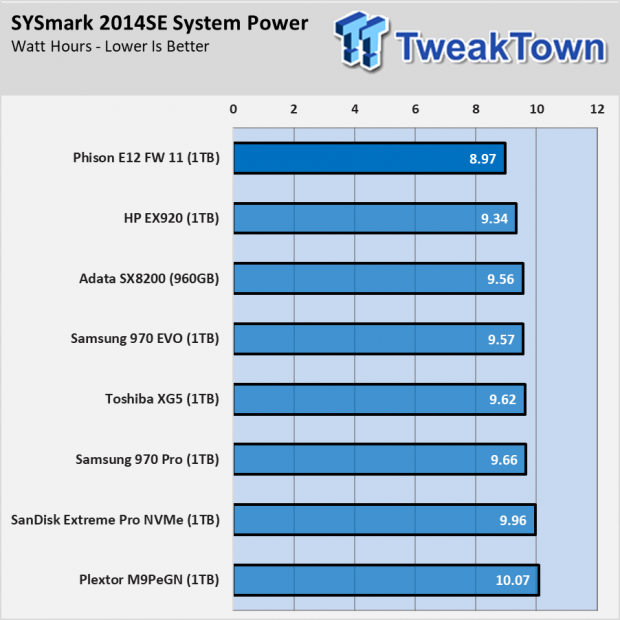 The responsiveness of the updated E12 is down when we compared it to the other products but it did learned a new trick, extreme efficiency. We never see Phison reference design drives winning power tests. The E12 is the first to even be on the upper half of the chart.

We can't call it a comeback because the Phison PS5012-E12 hasn't hit the market as a retail product yet, but the new firmware certainly gets us excited about when will come in the near future.

Phison's partners spent most of 2018 promoting the E8. It was long enough to forget what the market looks like with a premium drives from these companies. For the last few years, we can divide the market into three camps, Phison, Silicon Motion, and Samsung. When one isn't pushing the boundaries of price and performance in one of the tiers, shoppers miss opportunities for lower prices and aggressive performance via firmware or a faster refresh to the next generation.

The performance we saw today in our testing proves the E12 will be a force to reckon with when the partners bring them to market. It's a good time for Phison's partners to attack the premium market. We haven't heard any rumors coming out of Samsung, nor any new OEM drives that precede retail products. The 970 Series wasn't as dominant as previous 9-Series products. The E12 we tested today proved it runs with the Silicon Motion, Inc. SM2262 drives in many tests.

The best part of this is what happens when the companies bring retail drives to market. We often see performance increases as the companies put their own spin on firmware, overprovisioning difference, and the value-add accessories. Each new model tends to leapfrog the one before it, as companies try to give their customers more to be the next great SSD. That's what Phison hopes it has with the PS5012-E12, the next great SSDs. We should start to see how it plays out in the next month or two.