We've talked about the Silicon Motion, Inc. (SMI) SM2262 controller quite a bit already this year. The controller is a critical component in the three NVMe SSDs offering shoppers the best value today. The Adata SX8200, GAMMIX S11 and HP EX920 were among the best in our Game Load Time editorial that compared over 120 products. Did you know there is another, even lower-cost, SM2262 SSD available?

Have you heard about the Mushkin Pilot?

The Pilot only shaves a few dollars off the price of the Adata and HP SM2262 drives but it's technically the lowest priced SM2262 SSD available in America at the moment. With prices starting at just $49.99, the Pilot offers gamers and enthusiasts an exceptional value. The 1TB Pilot sells for nearly $100 less than the 1TB Samsung 970 EVO.

The PCIe 3.0 x4 interface allows the Micron 64-layer memory to reach high random read levels to give users a superior experience. Even if we removed the pricing details, this controller and flash combination still impresses us.

Mushkin brought the Pilot series to market in four sizes ranging from 120GB to 1TB, with the usual stops in between at 250GB and 500GB. Physically the design is nearly identical to the Adata SX8200, GAMMIX S11 and HP EX920. Other than the two Adata models, all of the drives use a different firmware and each company has a different overprovisioning strategy.

The high performance comes from the SMI SM2262 controller paired with Micron 64-layer TLC. Mushkin didn't make many, if any, changes to the Silicon Motion, Inc. reference design from what we can see. The Pilot does use different firmware from what we've tested with in the past, the Adata and HP drives with the same controller.

Mushkin covers the series with a three-year warranty. We reached out for endurance details. The company doesn't list any endurance restrictions on the product page or data sheet. 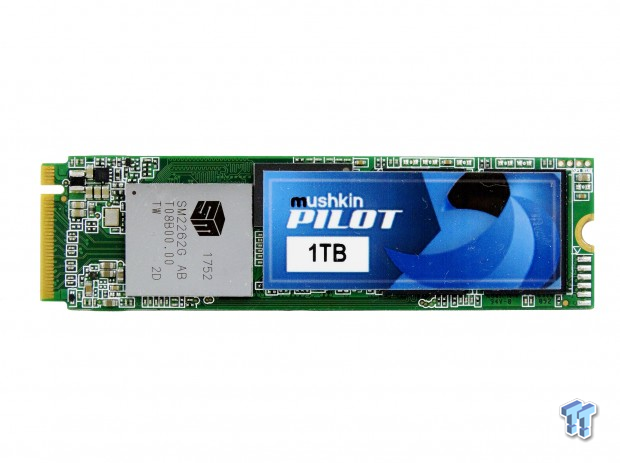 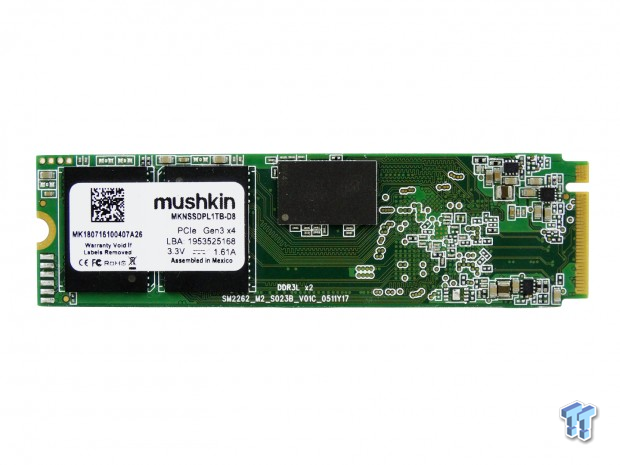 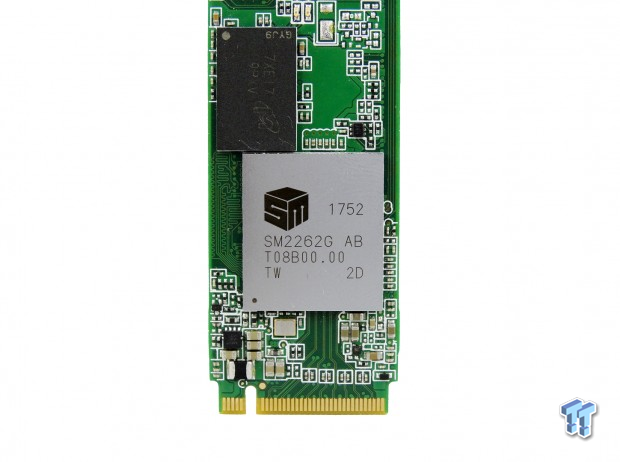 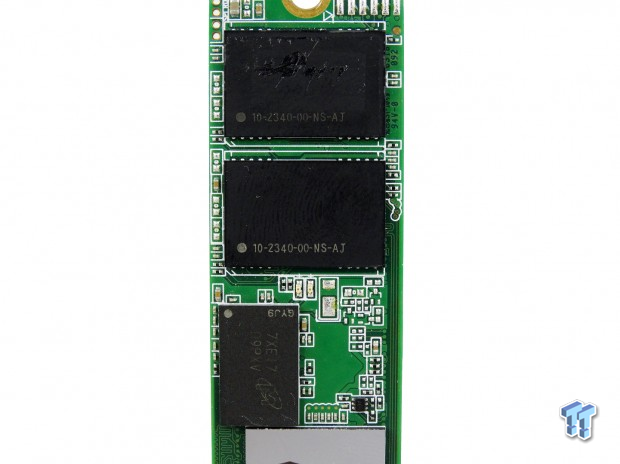 Mushkin ships the Pilot in a blister pack to keep the overall costs low. The drive uses a double-sided design with two flash packages on each side of the standard M.2 2280 form factor SSD. 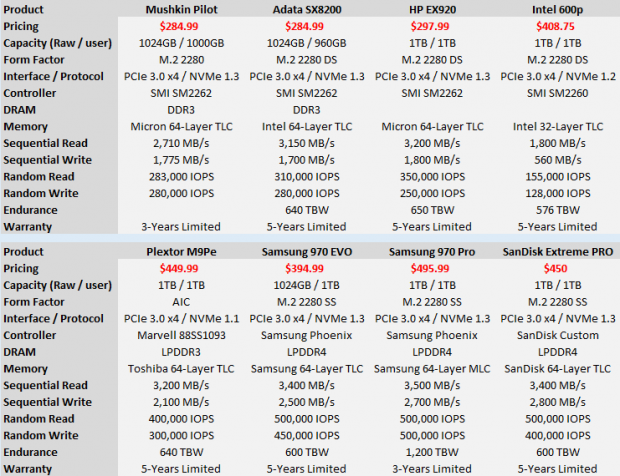 Every comparison drive in the charts today is or should be extremely popular. The Intel 600p was popular last year. It came to market with an aggressive price and created the entry-level NVMe market with the MyDigitalSSD BPX. The Intel SSD 760p, another drive with the SM2262 controller, succeeded the 600p but Intel didn't release the 1TB version when we tested the updated series.

The Adata SX8200 and HP EX 920 are the other two SSDs with the SM2262 controller. Both series are very similar to the Mushkin Pilot.

The Plextor M9Pe came to market with lackluster performance. It's not a drive many people talk about but after Plextor released the fourth and fifth firmware revisions, the performance has increased significantly. The SanDisk Extreme PRO 3D NVMe SSD is a nice drive but we lost some interest after the SM2262 drives came to market.

Samsung SSDs will always be popular. The company's current NVMe lineup is the 970 Series. It comes in two versions that are different by the flash technology. The mainstream series is the 970 EVO with 3-bit per cell (TLC). This has the same memory as the other products in this review, other than the 970 Pro. The Samsung 970 Pro uses 2-bit per cell (MLC), that MLC has several advantages over TLC, but it is also expensive. 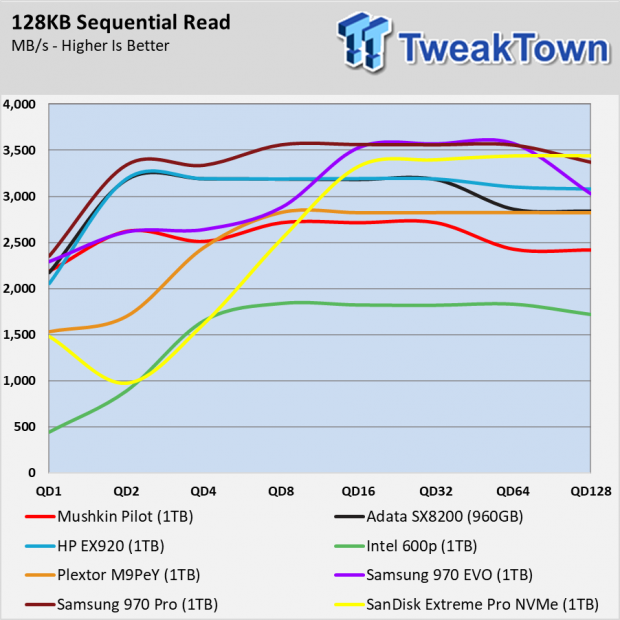 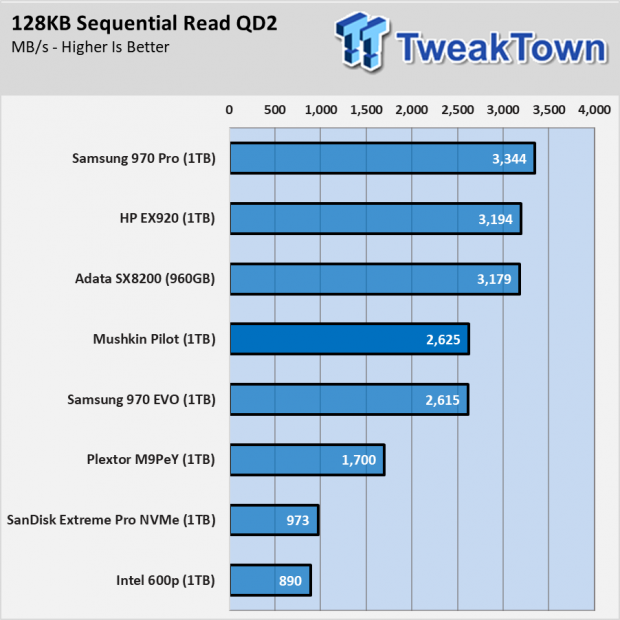 The 1TB Mushkin Pilot doesn't scale well with additional queue depth (QD) workloads when compared to the other SM2262 drives we've tested. That's not much of an issue though because the QD1 sequential read performance is over 2,000 MB/s. You would need a very fast drive to copy data from the Pilot for this to become an issue. 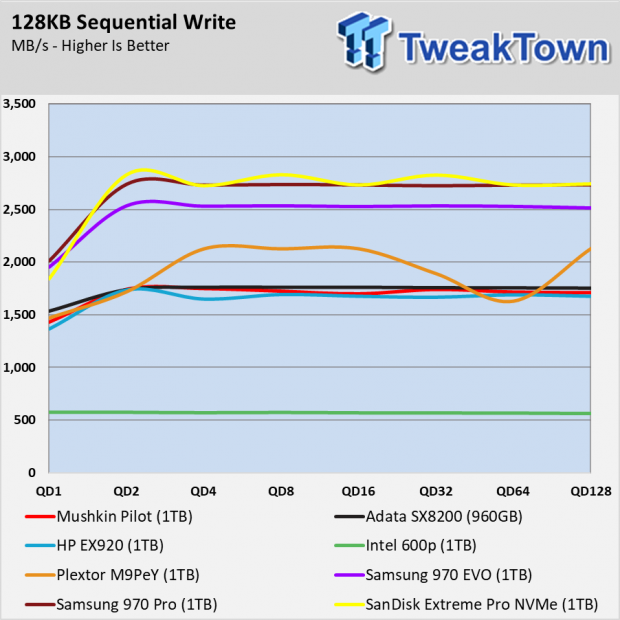 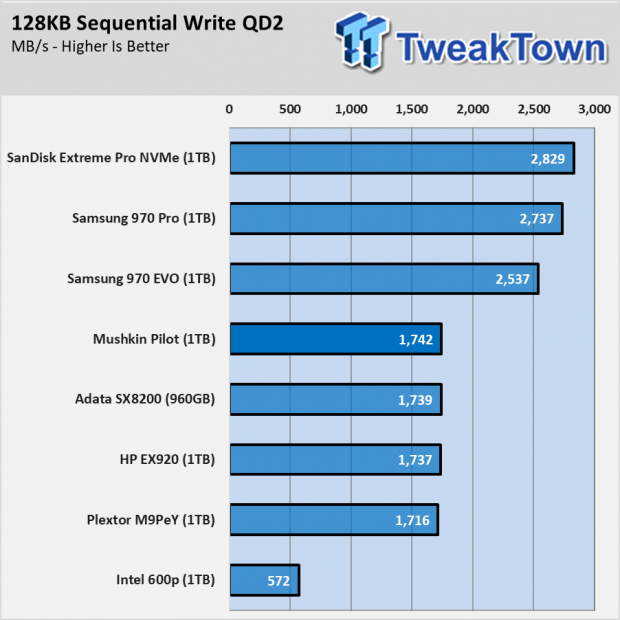 The sequential write performance is nearly identical to the other drives with the same controller. The drives deliver more than 1,700 MB/s writing data at QD2. The two Samsung 970 Series and the SanDisk write faster but they also cost quite a bit more. 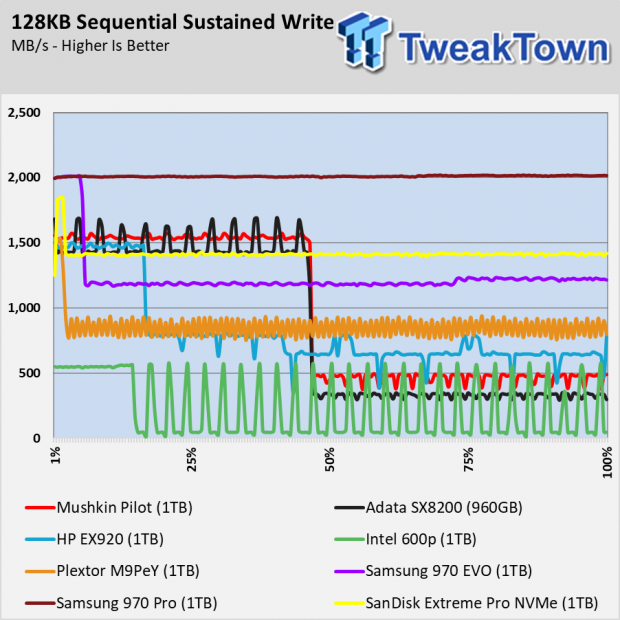 The Pilot, EX920, and SX8200 all use different firmware. The SX8200 uses more overprovisioning than the others do. Mushkin's firmware gives the drive more consistency with the SLC buffer, but most users will not see much of a distinction working with large block size sequential data. 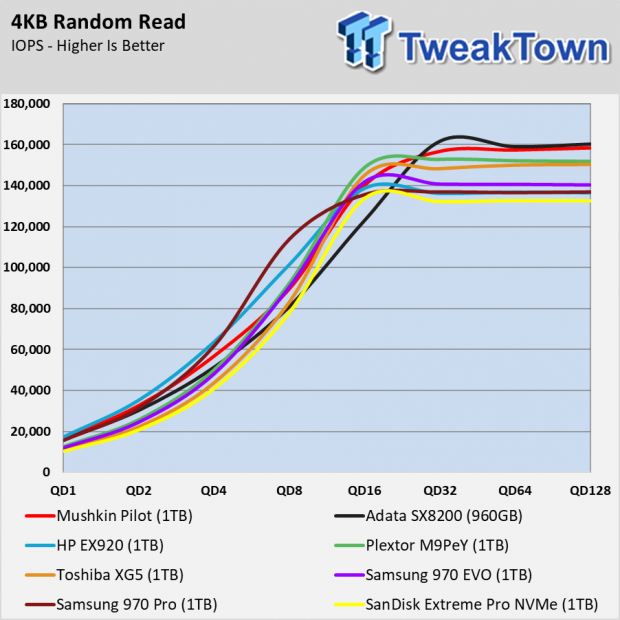 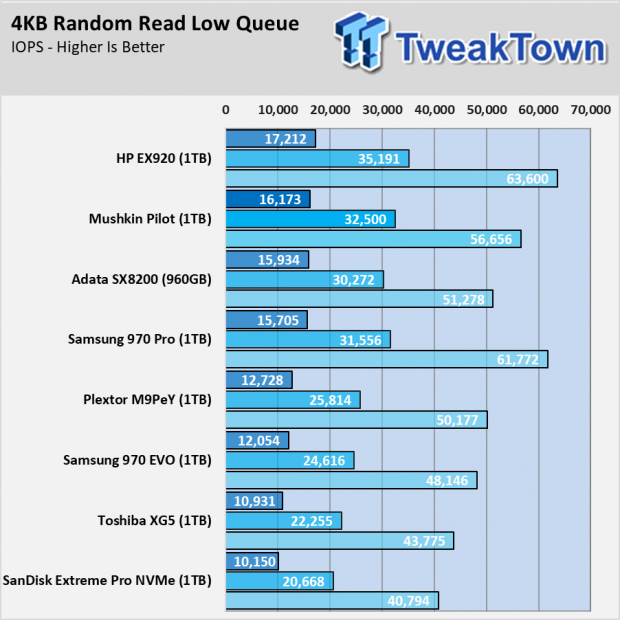 The HP, Adata, and new Mushkin stand out from the rest of the drives in price, but also when it comes to random data reads. These are the most read types of files in your PC. When we talk about in-out operations per second, IOPS, we're really talking about latency in a language that is easy to convey. The difference between a few macro seconds to read a file doesn't seem like much, but when repeated hundreds or thousands of times it becomes significant. IOPS is an easier way to look at the numbers because .003 and .005 is rather dull. It doesn't make nice charts, either.

The 1TB Pilot surpasses both the Samsung 970 EVO and Pro. It's only slightly faster than the SX8200 at QD1 random reads, but not quite as fast as the EX920 at this task. 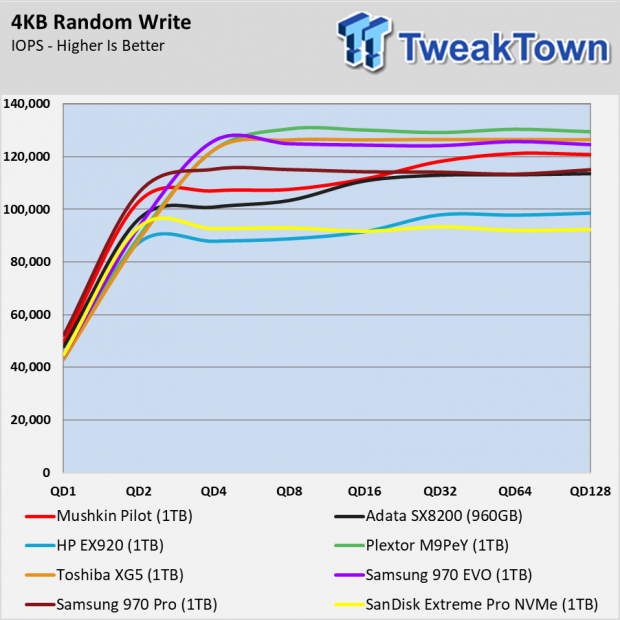 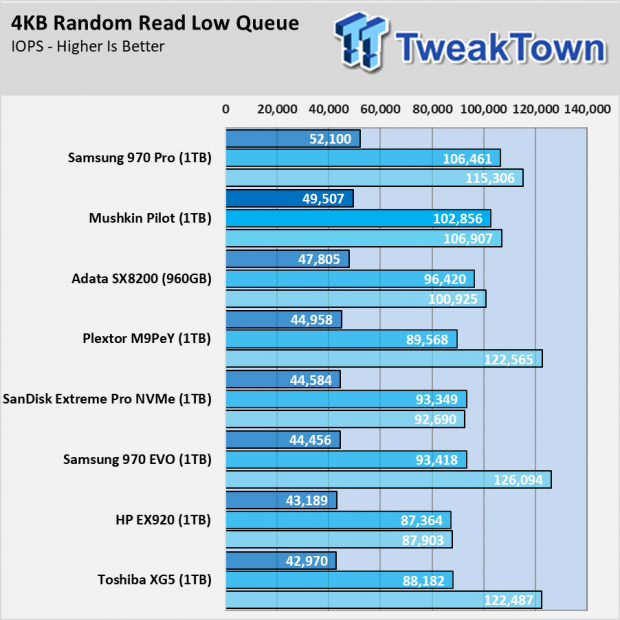 The Pilot surpasses the other SM2262 drives in random data writes. It gets very close to the QD1 performance set by the Samsung 970 Pro with data bursts. 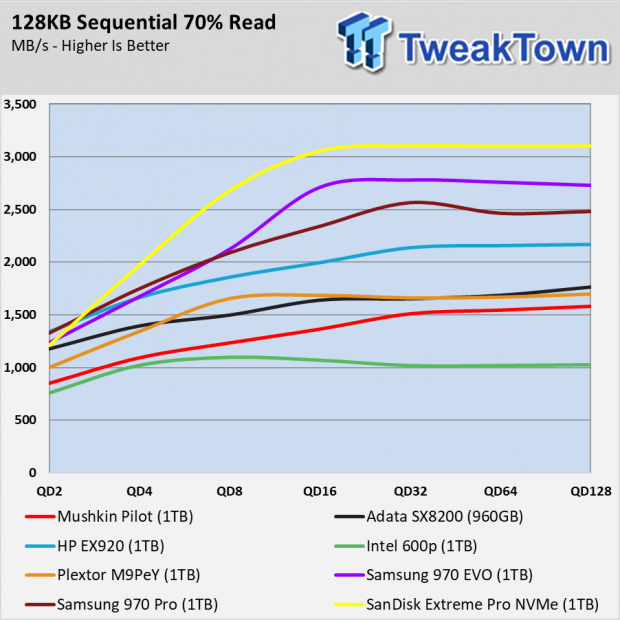 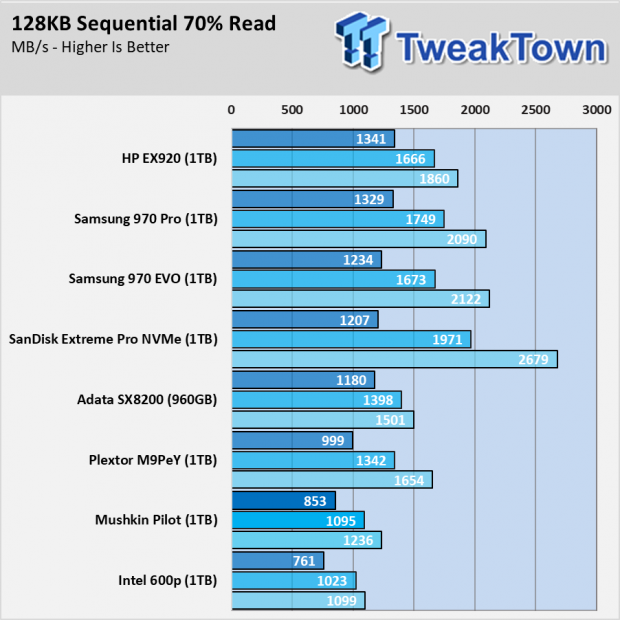 Mixed workloads are the practice of reading and writing data at the same time. SSD architectures and firmware hands mix the workload differently. The Pilot falls near the bottom of our charts with mixed sequential data. The performance is quite a bit different compared to the HP EX920, which led all of the drives in this test at QD2. 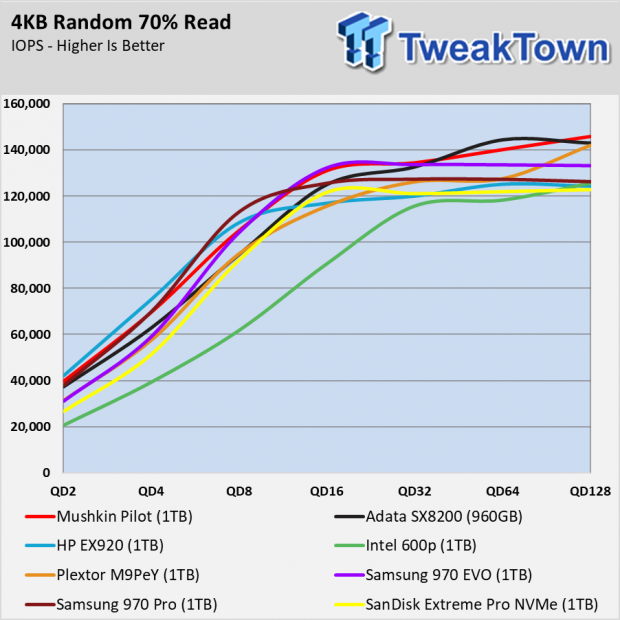 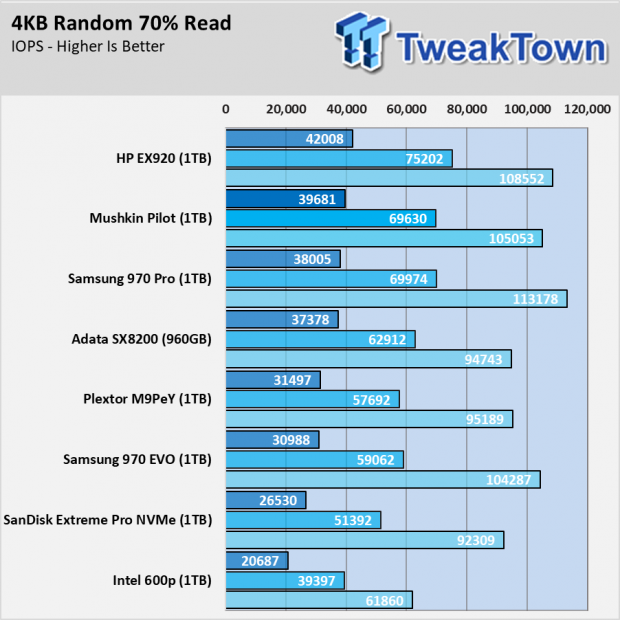 The drive didn't have any problems leveraging the high random performance to score well in this mixed workload test.

The synthetic tests explain the background technology and give us indicators on how a drive will perform. The real-world tests show us what to expect under normal use. 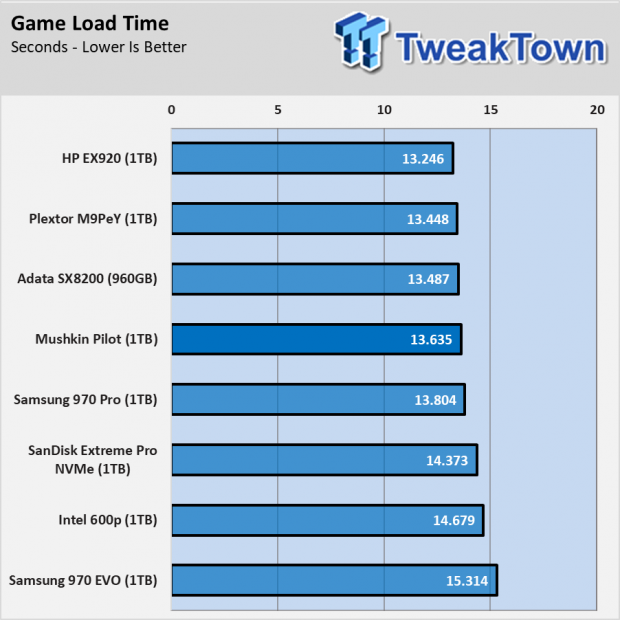 The 1TB Mushkin Pilot performs quite well in the Final Fantasy: Stormblood game load time benchmark. It trails the two other SM2262 drives but not by a much. It's faster than the Samsung 970 Pro and that's a big win for Mushkin and gamers alike. 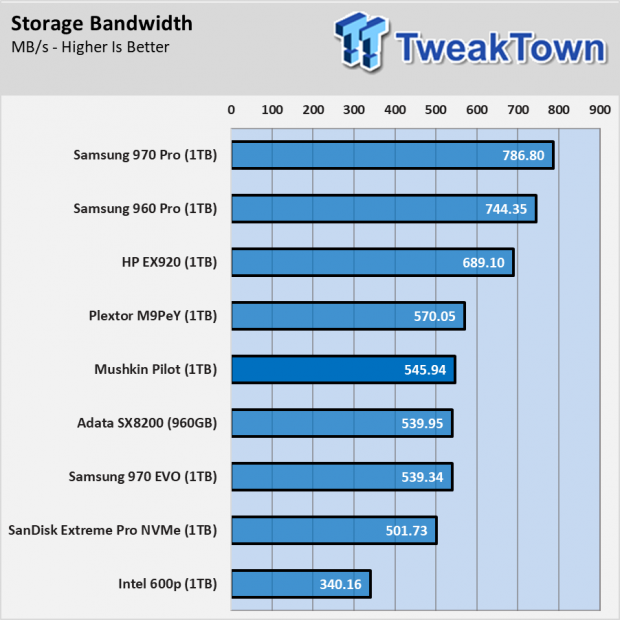 PCMark 10 uses ten applications to measure storage performance. We take the average throughput score to compare products. The test runs one application after the other, with very little idle time in between.

The 1TB Pilot performs really well in these tests. It's slightly faster than the Adata SX8200 but trails the more expensive HP EX920. All of the SM2262 SSDs trail the two Samsung 970 Series SSDs. The SM2262 doesn't react well with back to back tests. The drives need a little more recovery time. 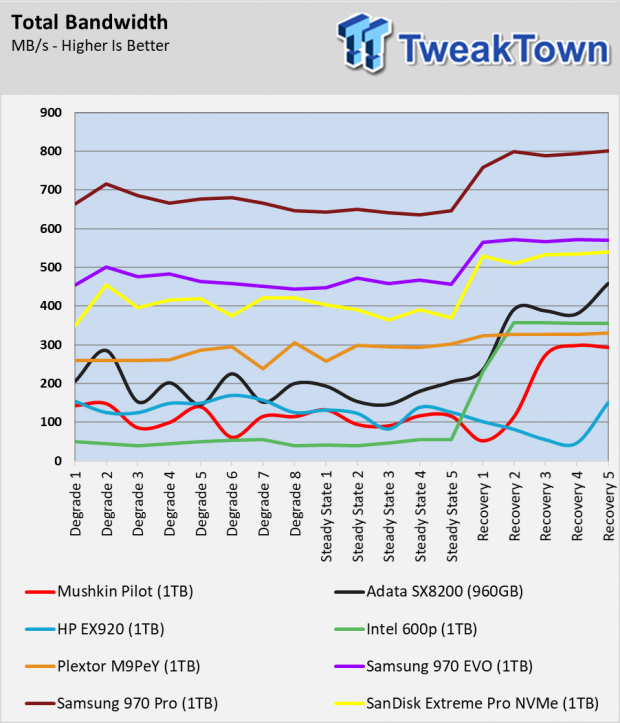 You can see how very little recovery time hurts SM2262 SSD performance under heavy workloads. The SM2262 drives all fall near the bottom of the PCMark 8 Extended Storage Test chart. The drives recover with idle time but require more time to regain all the performance back. 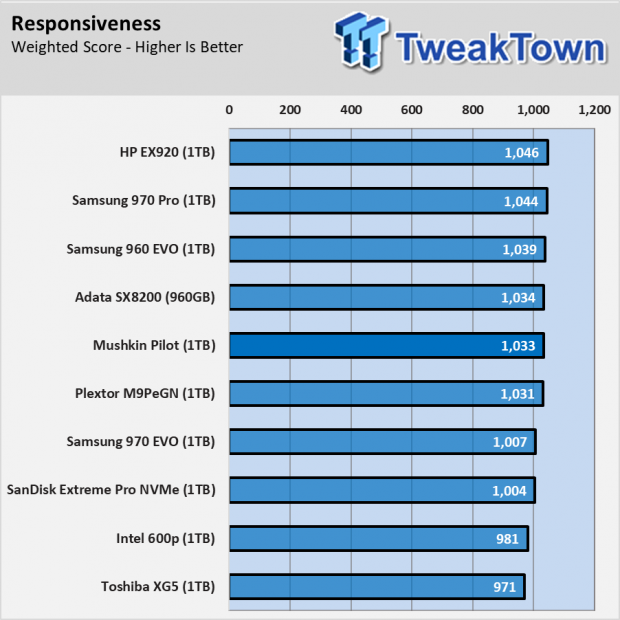 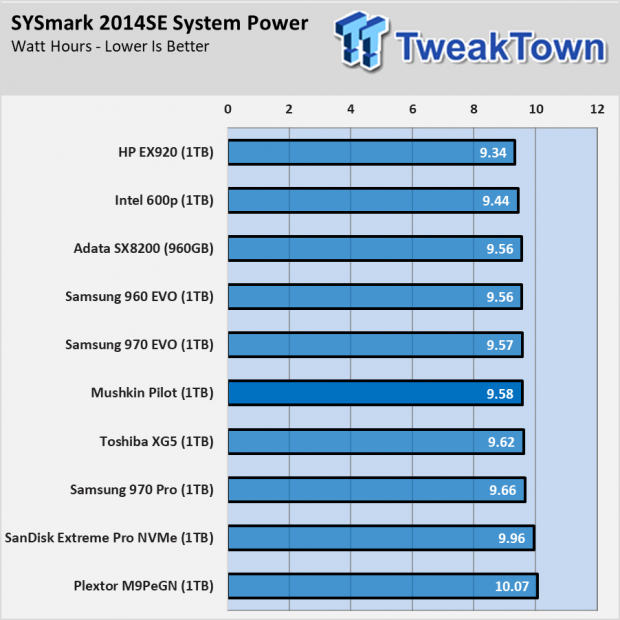 The 1TB EX920 is the only SM2262 SSD to outperform the two Samsung drives in the SYSmark 2014 SE Responsiveness Test. The SX8200 and Pilot both show strong and nearly identical performance. 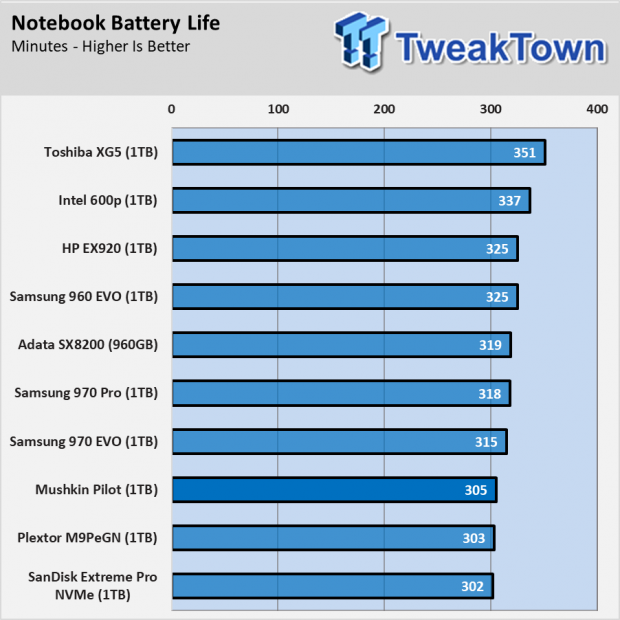 The Mushkin Pilot is the least known SM2262 SSD but it's certainly a product you should take seriously. In all capacities, it's one of the lowest priced 2262 SSD's sold in America, but that may not be the case in other countries. Staying the lowest priced 2262 will be a challenge for Mushkin, though. While writing this article Adata adjusted the price of the 1TB SX8200 to match the Pilot, and that changes our overall outlook. 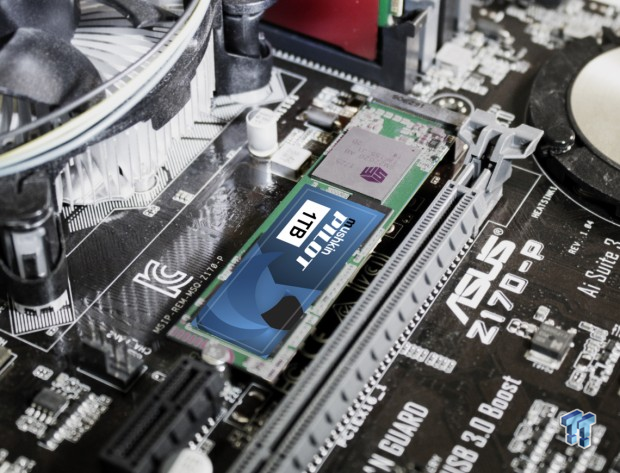 The SX8200 and Pilot deliver the same performance and user experience. Both trail the HP EX920 due to firmware, but overall the three are very similar. The EX920 is the best of the trio, with 5-year warranty and longer endurance. That wasn't always the case, HP increased the warranty from three years to five and increased the warrantied endurance rating after the series came to market. The Adata SX8200 also ships with a five-year warranty. This is where we have to criticize Mushkin's three-year coverage and undisclosed endurance rating. Mushkin loses this battle and with Adata's new SX8200 price that matches the Pilot, loses big.

Mushkin doesn't give users access to any SSD management or disk clone software. To be fair, HP doesn't either but Adata has a full software suite and it's valuable when you need it. If you are willing to look for it, there are free versions of software to monitor the status of the drive and even cloning software. It's nice to have a product-specific software solution for these tasks, especially if there is a guarantee to work with your new drive.

Overall, the Mushkin Pilot is an incredible SSD. The 1TB drive we tested today costs less than the 1TB Samsung 970 EVO by nearly $100. It's a remarkable achievement. The drive is equal to, or superior to the EVO in many ways. It also trails the EVO in others, like endurance. When you put it all together, the Pilot is a great SSD worthy of your consideration. If you want an NVMe SSD that gives you a real performance increase over your existing SATA drive, this is one of the few available that will feel like an upgrade.