Last September, Seagate slipped a Nytro server SSD in the channel based on the Phison PS5010-S10 SATA controller. The 256GB drive sold for less than $80 and was an excellent value. Seagate never announced the drive and it wasn't listed on the website. We later learned a Seagate customer ordered thousands of Nytro 141 SSDs to use as a boot drive in servers and didn't take delivery of a few thousand. Seagate stated that less than 5,000 Nytro 141 drives would sell in the channel but a retail consumer drive may come with a similar configuration. 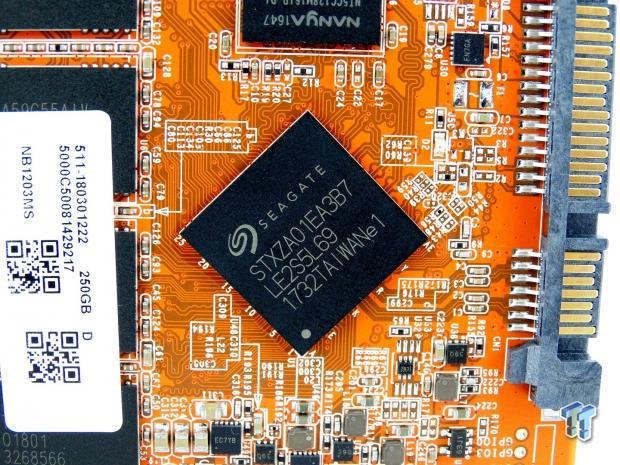 The Seagate Barracuda SSD fits the description. The drive uses a Phison S10 SATA III controller and pairs it with the Toshiba TLC BiCS FLASH (3D NAND memory). The firmware on the Barracuda SSD is two generations newer than our Nytro 141 sent last year to us by Computer Upgrade King (CUK USA), a US-based system builder based in Virginia.

The main difference between the Nytro 141 server boot drive and the consumer-focused Barracuda SSD is the flash. The planar TLC on the Nytro had abysmal, but period correct for planar TLC, endurance. The retail drive increases endurance thanks to new 3D technology but the company chose to retain the same 5-year warranty.

Seagate released the Barracuda SSD in four capacities last month. Sizes range from 250GB to 2TB with the usual stops in the middle. There is very little performance variation between the different capacities. Sequential reads span the series with a 560 MB/s rating. The sequential write performance varies between 530 MB/s to 540 MB/s with the latter rating on the two largest capacity models. Random performance comes to 90,000 IOPS read and write for every Barracuda SSD according to the datasheet.

The drives use a Seagate branded version of the Phison PS5010-S10 controller with a quad-core processor and eight flash channels. The controller first appeared with 19nm Toshiba planar MLC but quickly adapted 15nm MLC and TLC. The Barracuda SSD is the second SSD we've tested using the controller with Toshiba BiCS FLASH 3D TLC memory

All capacities include a 5-year limited warranty through Seagate. The company doesn't offer a software suite with this SSD series. 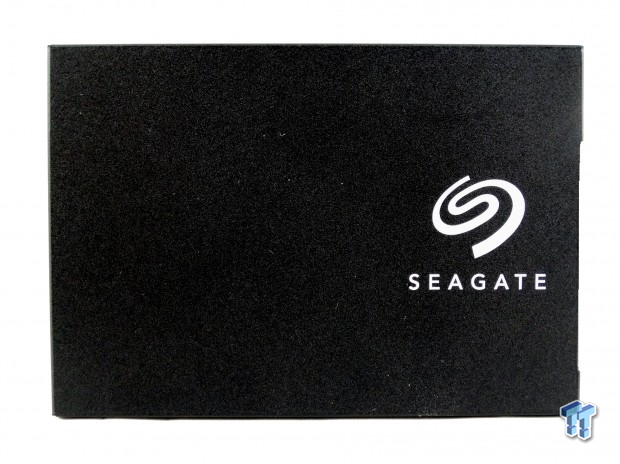 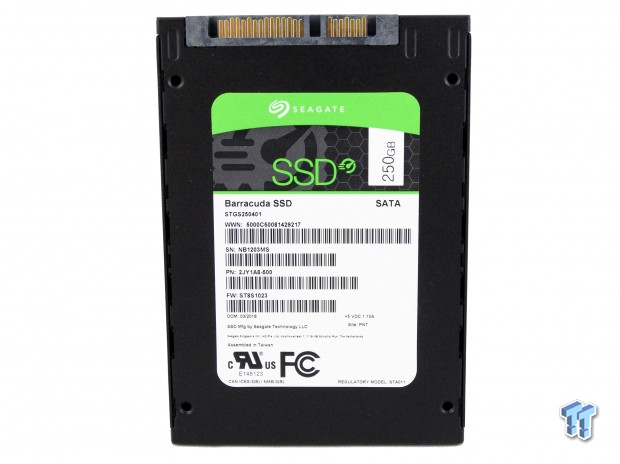 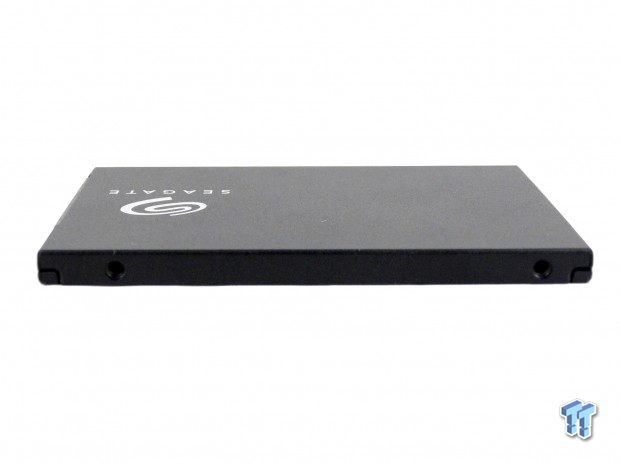 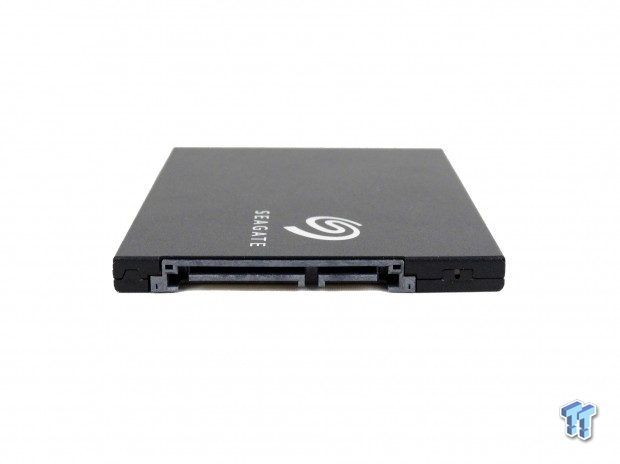 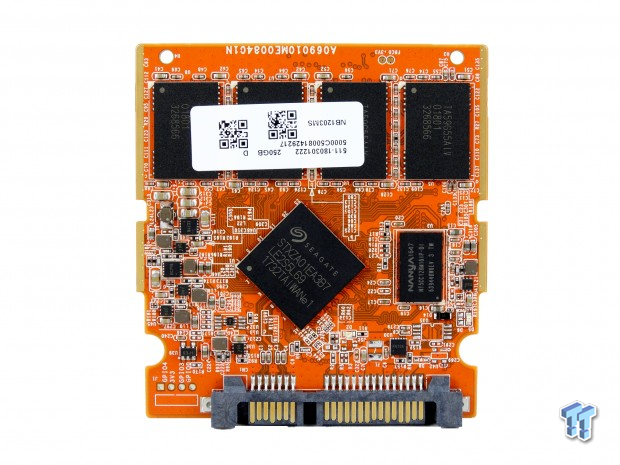 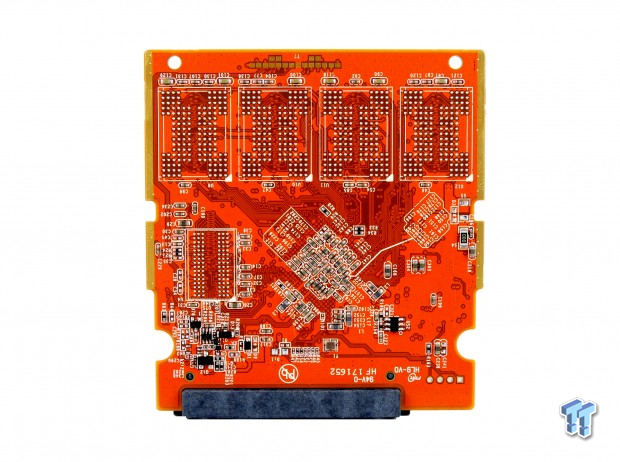 Seagate chose a metal case for this series. The drive uses an attractive design that will work in any PC regardless of your color and LED light pattern.

Inside we found a basic Phison reference design with a tilted controller to reduce trace length to the flash and a Nanya DDR3L DRAM package. Larger capacity drives utilize both sides of the circuit board, but the 250GB model stuffs the components on one side. 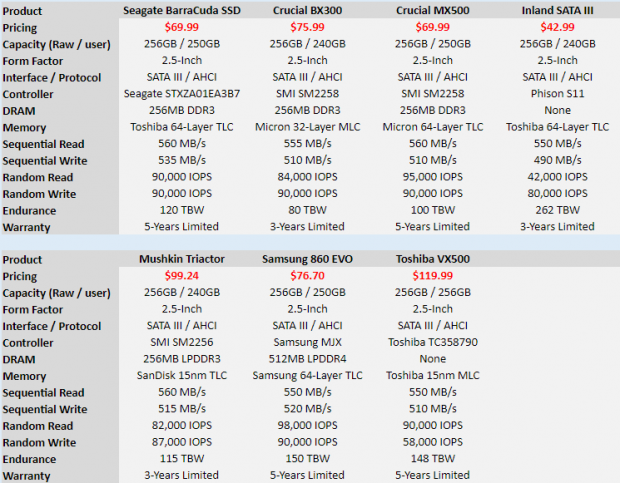 We pulled out usual 256GB class drives to compare to the Seagate Barracuda SSD. The top performers in this group have been the Crucial MX500 and Samsung 860 EVO. The Crucial MX300, Mushkin Triactor, and Toshiba VX500 are all older models that you may already own.

The Inland Professional SATA III is a low-cost DRAMless SSD that we tested last month. The Toshiba VX500 is also a DRAMless design. 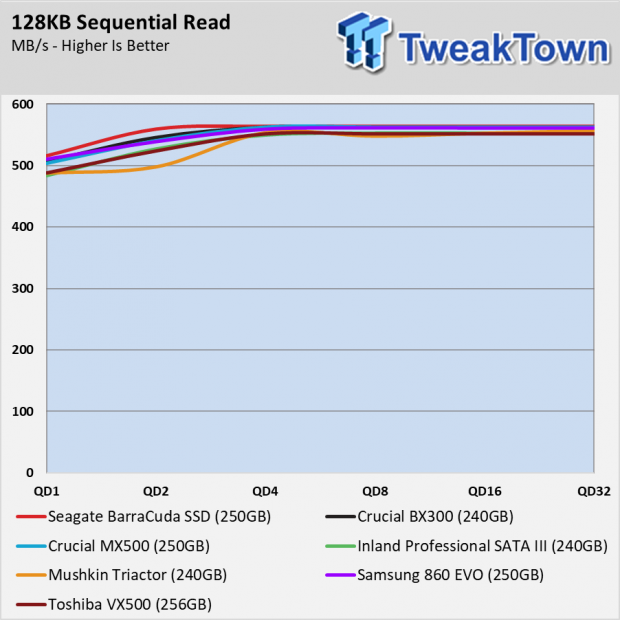 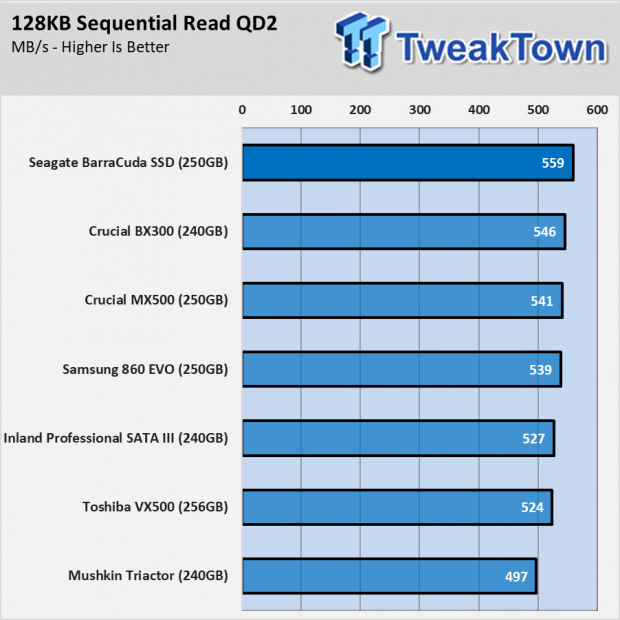 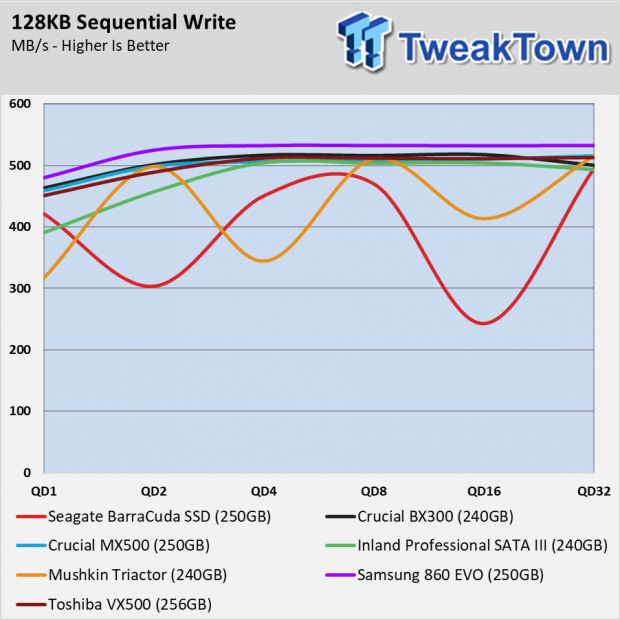 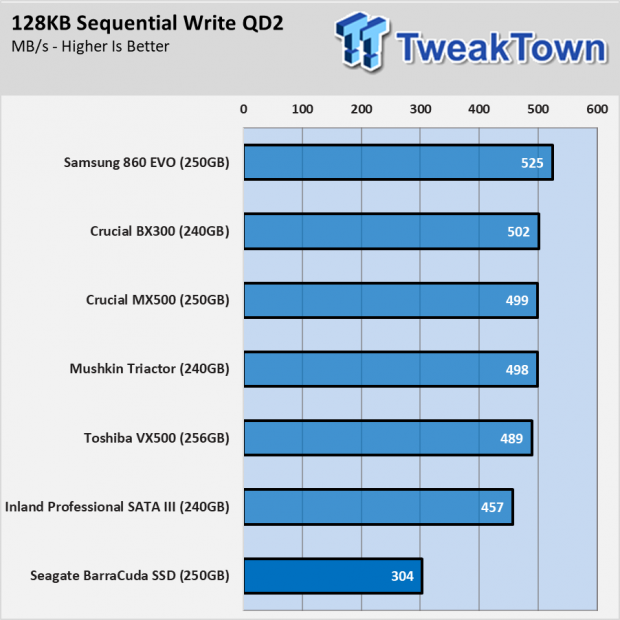 We cannot say the same about writing sequential data. With planar TLC flash the S10 has poor consistency as the SLC buffer fills and flushes creating an ebb and flow effect with performance while data fights its way to the memory. The same happens with 3D TLC memory but to a lesser extent. 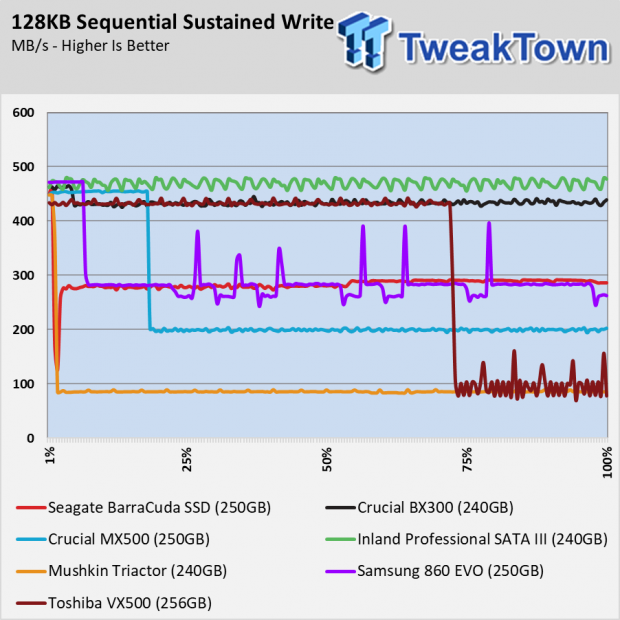 Writing a large amount of sequential data to the drives, we see a similar performance drop point between the Mushkin Triactor (SMI SM2256 controller and planar TLC) and the Seagate Barracuda SSD. The Triactor drops to just 90 MB/s after the SLC but the Barracuda still delivers around 290 MB/s.

The new Seagate SSD wins the battle against previous generation technology but loses the overall war. With products like the new Crucial MX500 and Samsung 860 EVO running dynamic buffers that keep the write speed higher for longer, the older design has a lot to overcome. 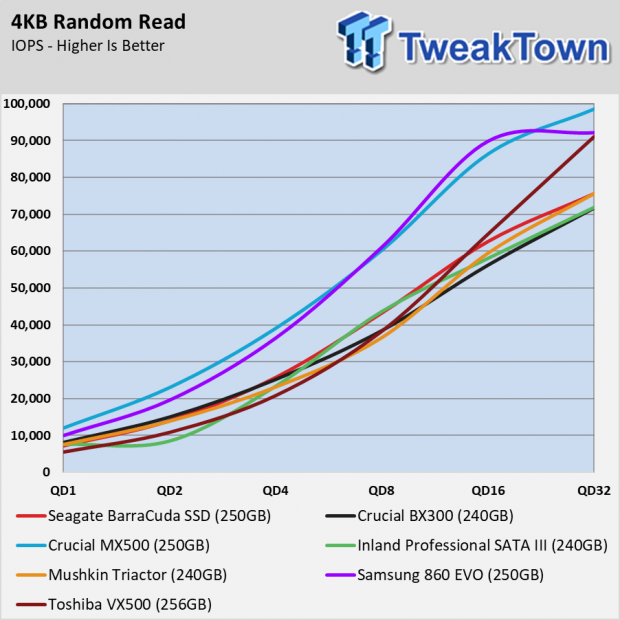 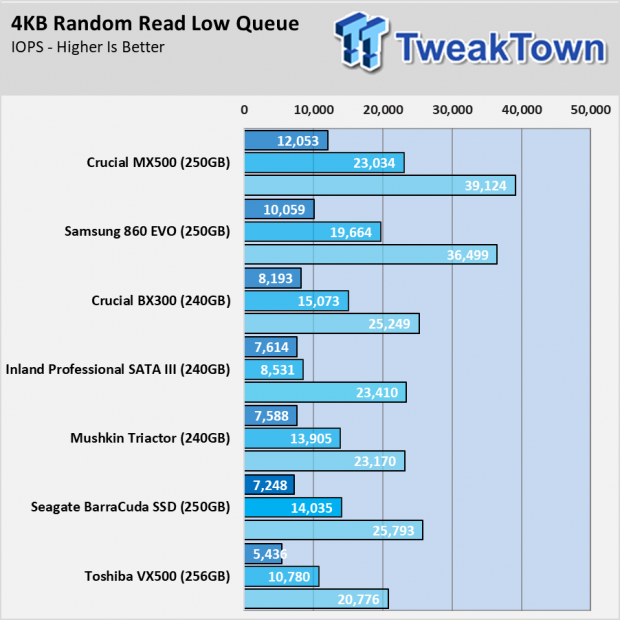 The Seagate Barracuda Pro also shows lower tier performance reading random data. This metric is what makes your computer or device feel fast when moving around the operating system and loading applications. The Seagate drive delivers just 7,200 IOPS at QD1, around 30% less than we recommend today. The drive is much faster than a hard disk drive but most shoppers do not limit shopping to just one brand. 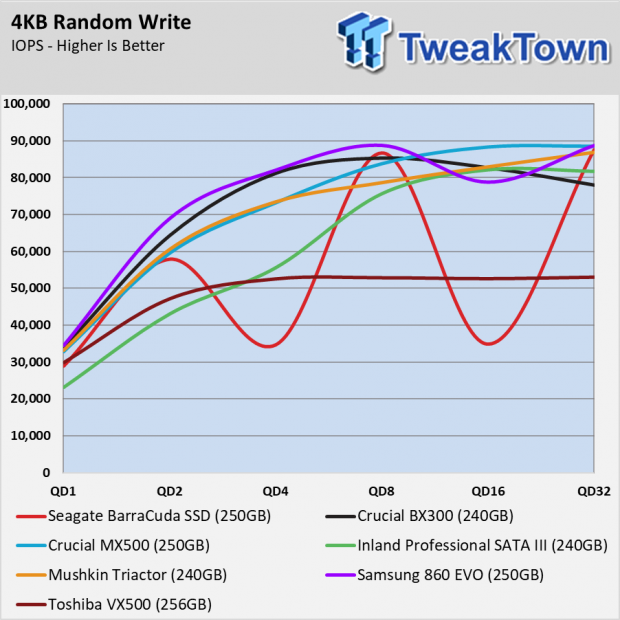 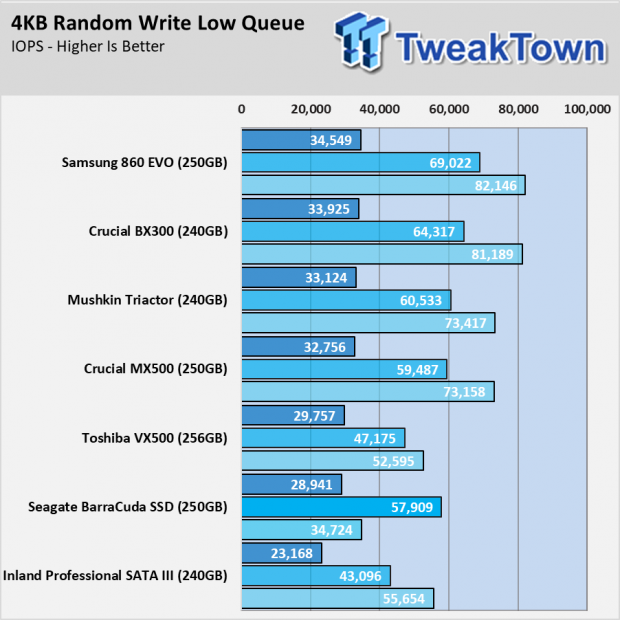 The Barracuda SSD shows the same issue with a small SLC buffer in the random write test that we observed in the sequential write test. The difference here is that most random writes come in bursts so you are likely never to see a random write event that lasts more than a few tens of a second under consumer workloads. You will also rarely have an event beyond queue depth 2. 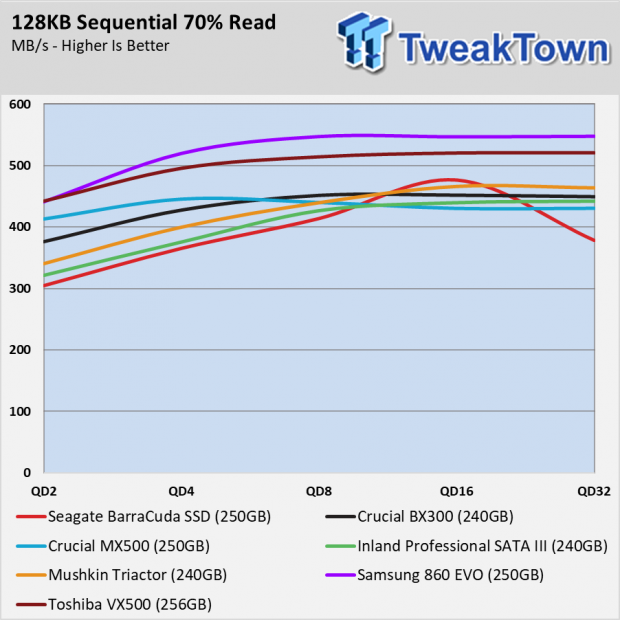 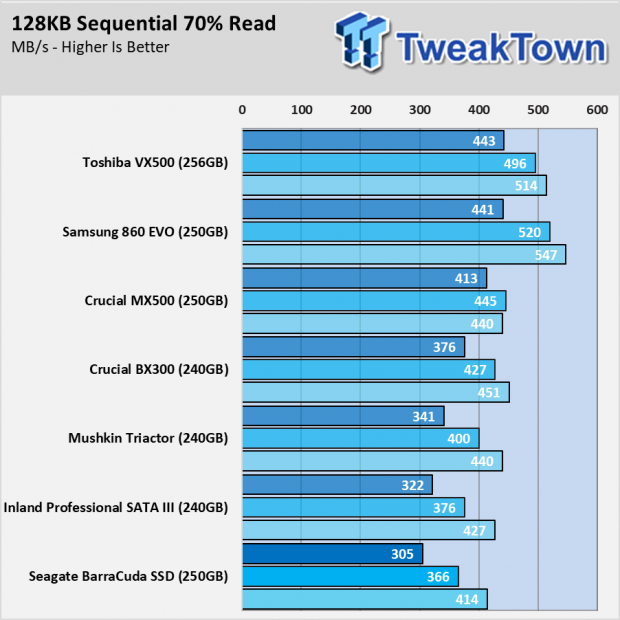 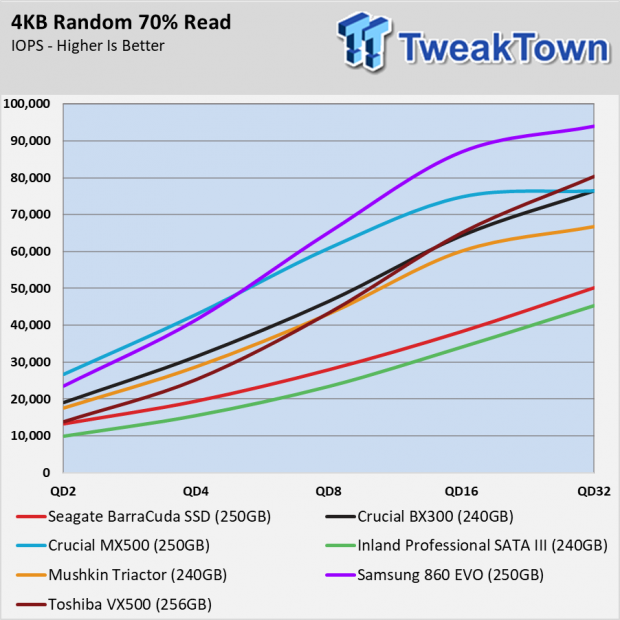 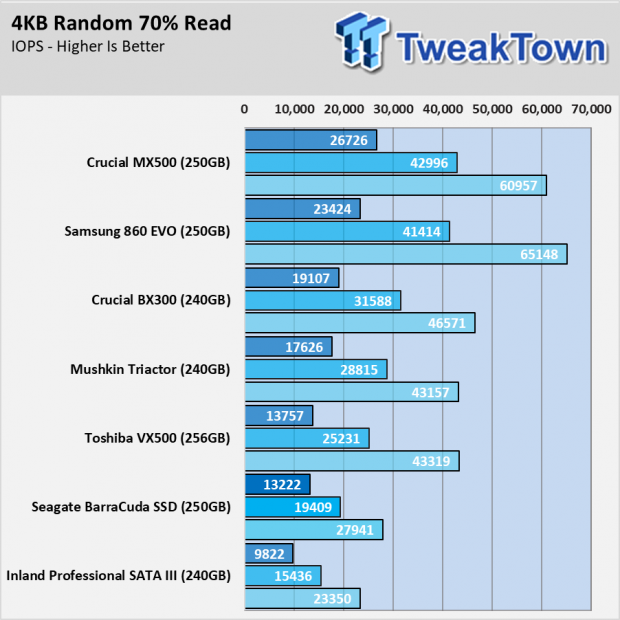 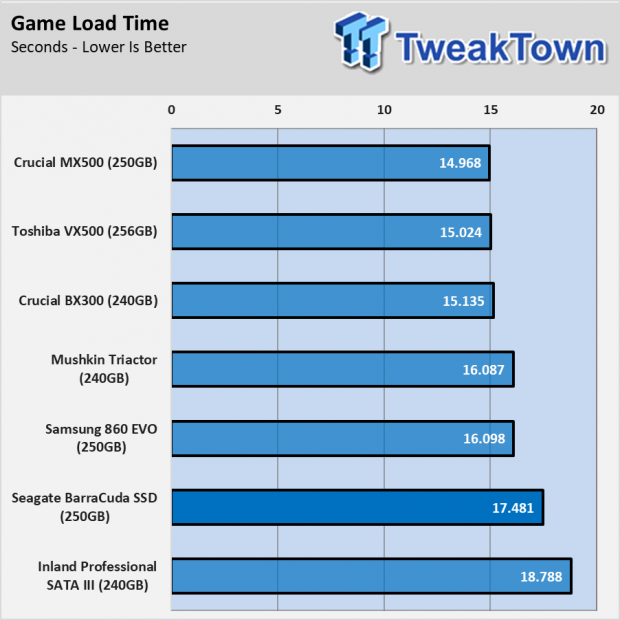 The Barracuda SSD is near the bottom of our game load time test that uses Final Fantasy: Stormblood to measure how long it takes to load levels. The drive is faster than the Inland Professional, but other products that sell at or near the same price as the BarraCuda perform much better. 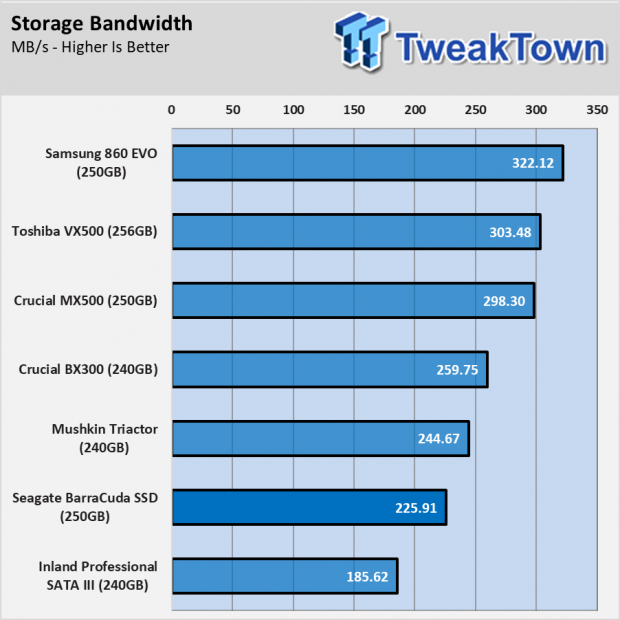 The PCMark 8 Storage Test uses ten common applications to gauge performance across a broad range. The Storage Bandwidth score is the average across all ten tests. 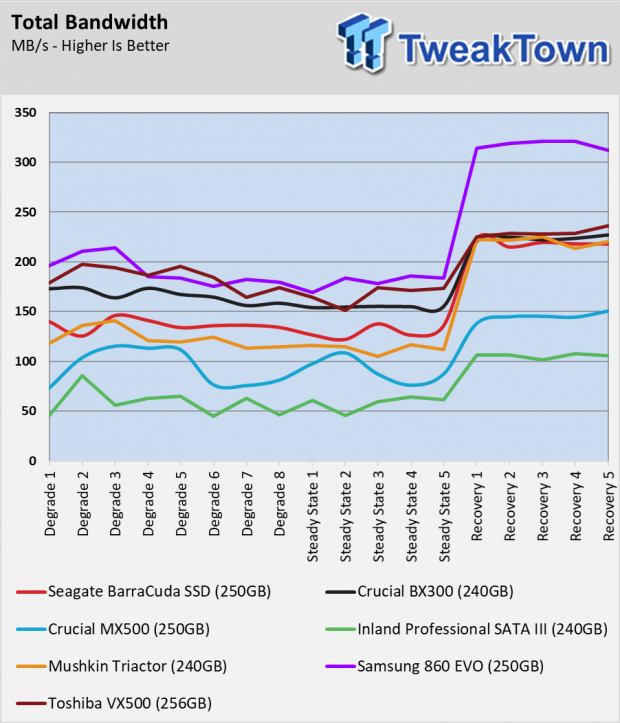 The PCMark 8 Extended Storage Test uses repetitive workload to push the drives into steady-state before running the ten applications to measure performance. Workstation users want to look at the steady-state tests but most of us should focus on the recovery test phases, where the drives idle for five minutes before resuming the workload.

The Barracuda SSD recovers well and delivers slightly over average performance when given the opportunity to run background activities. 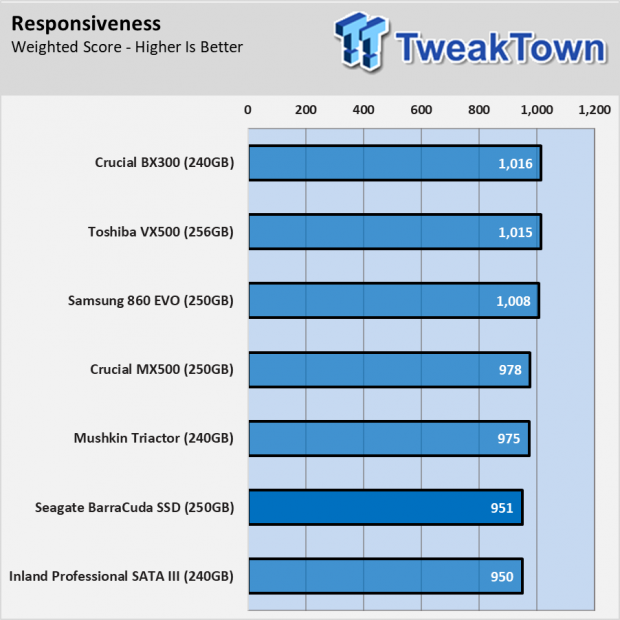 We ran into a significant issue with the Seagate Barracuda that we also experienced with the Nytro 141. In our Lenovo Y700-17 gaming notebook, the drive would not work on a reboot. The system had to shut completely down and then boot (a cold boot). The system would recognize the drive on a warm reboot. The issue wrecked out BAPCO SYSmark 2014 SE power test but we were able to record a responsiveness score. 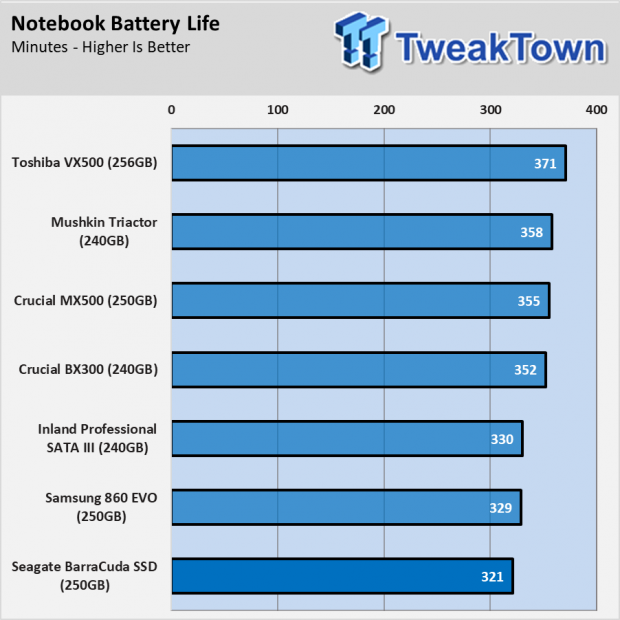 We experienced the warm reboot issue in a second Lenovo Y700-17 notebook used to run BAPCo's MobileMark software. The drive only produced a 321-minute score, the lowest of the drives tested today.

It's déjà vu all over again. The Barracuda SSD is Seagate's second consumer SSD. The first came to market all the way back in May 2013 under the Seagate 600 label. We were highly critical of Seagate in our 600 Series review and not much has changed since.

Despite being the most recognized name in computer storage, Seagate still doesn't have a firm grip on SSDs. Granted, Seagate doesn't have a flash fab, or an abundance of controller IP, but that isn't an excuse to bring lackluster SSDs to market. Adata and HP also lack flash and controller IP but have some of the best consumer SSDs shipping today with the SX8200 and EX920.

Low performance isn't the only issue with the Barracuda SSD. Two Seagate SSDs, one server-focused Nytro 141 and now the Barracuda, have issues with a common gaming notebook. I reported the issue last year when testing the Nytro 141 and somehow it persists today in a new retail product. The reboot issue was acceptable to a degree on the Nytro 141. The drive was destined for a very specific configuration and then a few thousand leaked into the channel. The Barracuda is a retail release so the limited availability excuse doesn't apply here. If we had similar issues with other SSDs this wouldn't be as large of an issue, but only two drives have the warm reboot problem and they both come from Seagate.

The current flash oversupply market will continue to bring companies back into selling branded SSDs. Just last week we looked at GIGABYTE's first SSD that uses the same hardware configuration as the Seagate Barracuda. Competition is good for shoppers but it also acts as a dense fog for those not informed. Seagate's name and distribution alone will sell SSDs but the Barracuda SSD is not the product we wanted to see from the company. Leave this one on the shelf and reach for a product from a company with more experience in flash. We still really like Seagate's hard disk drives like the Barracuda Pro, but success in spinners doesn't equate to making great SSDs.