Introduction, Specifications, and Taking Advantage of the Season 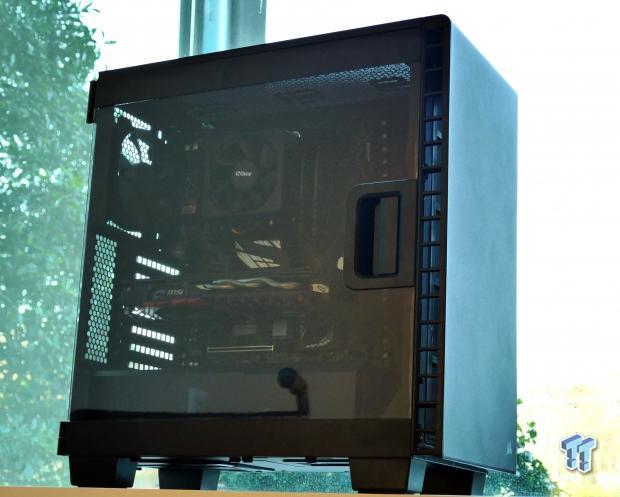 About a month ago, AMD reached out and asked if I would be willing to look at an AMD-based (CPU and GPU) system that could play Battlefield 1 (BF1) at under $1000.

Like any responsible hardware evaluator, I decided to take on the challenge, and since I had never played BF1 before, I decided it would be a nice experience to play through the entire campaign and then go online for some matches. I decided I would pair the PC with a 4K monitor, just to see how far the PC could go. Worry not, I also experimented with 1080p and 1440p, and tried three different quality levels to explore different configurations.

To boost things up a notch, I also decided to use the system without an overclock, and then try out overclocks on the CPU and GPU and see how far I could push the system. I made sure to gather some quantitative data along with my qualitative findings and let me tell you I was surprised.

There are many other ways to build a powerful AMD gaming system for under $1000, but this system not only looks great, but it also uses high-quality parts. One funny aspect of this build is that it's using an Intel 600P series M.2 SSD, and when I had a buddy produce a similar configuration, he was left also picking the Intel drive because of its low cost.

The cost of the products here are in many cases higher than prices on the market; I would estimate this build could be done for roughly $80 - $100 less.

Taking Advantage of the Season

My job isn't to help people build computers, so I went to someone who helps people pick configurations every day, knows the price of all types of hardware, and knows how to cut costs. I took a trip to my local Microcenter and asked a friendly sales associate named Kyle to help me configure the best AMD system he could for under $1000. I showed him the list above, and he took it as a personal challenge to beat the AMD supplied configuration. Since the holiday season is coming up, a lot of older stock is being discounted to move in more popular products, and there are great deals to be found. The AMD FX 9590 Black Edition CPU runs at higher frequencies than the FX 8370; the downside is it gets hot, requires a very good cooler, and a 990FX motherboard with a nice VRM to run well. It was on discount and only cost $159, $20 cheaper than the FX 8350 above.

GIGABYTE's 990FX-Gaming motherboard not only has the latest features such as USB 3.1 type-C and x4 PCI-E 2.0 M.2, but it supports the 220W FX 9590. He chose another good-looking case, one of his favorite recommendations; the NZXT S340. Then he added in an ASUS RX 480 ROG STRIX, a very nice RX 480 with a hefty cooler. He chose the cheapest memory they had, the Crucial Ballistix Sport 8GB kit, which runs at 1600MHz (a tad slower than what AMD had chosen). PSU was up next, and he wanted to originally use a 750W PSU, but I convinced him we did not need that much power and we settled for a CX650M at 650W.

The next thing he chose was the cooler, a single radiator AIO water cooler; the Corsair H55. He went after storage to find something reasonable to give us some extra room for the OS and RGB strip, and the 256 Intel 600p was only $70! Nothing even came remotely close to the value the Intel 600p provides, and that is the reason AMD chose it. After the OS was added, we had about $30 left and tossed in a remote controlled RGB LED strip because the motherboard doesn't have RGB cable support.

The total bill came to $1000.90, not including tax, well within the 0.1% margin of error I decided to set after the fact. The configuration above is not what I used in this article, but just an experiment to see what could be had if you walked into a store or ordered today.

The System and Setup 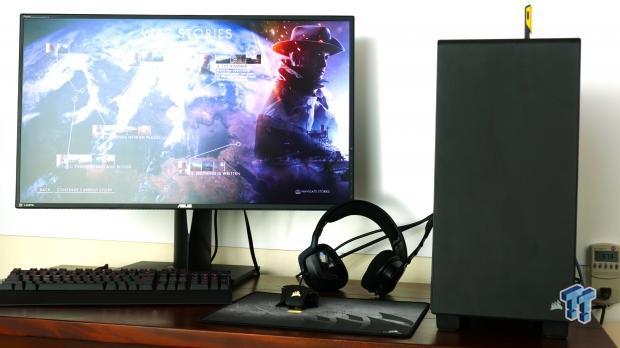 I used an ASUS ProArt PA328 4K monitor, and I also used an ASUS MG279Q which supports AMD FreeSync to check out different experiences. Keyboard, mouse, and gaming headset came from Corsair. 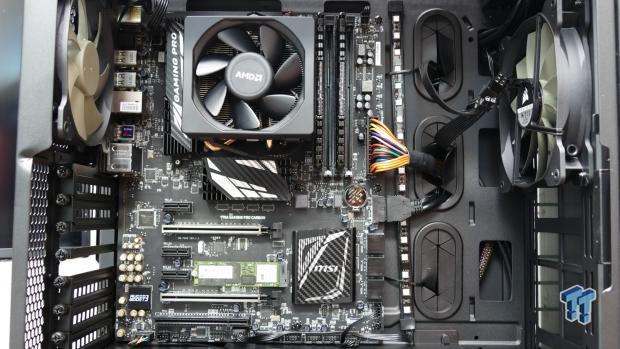 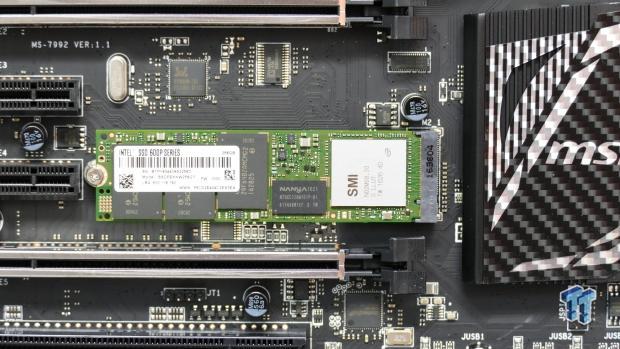 I had AMD build the system and ship it out. They shipped it without installing the GPU because most damage comes from GPUs breaking the slot during PC shipments. The SSD is an Intel 600P series 256GB. 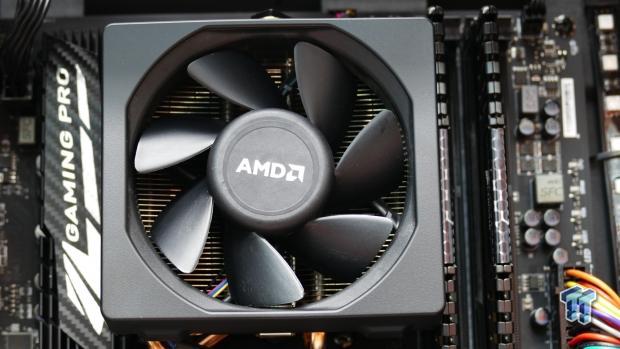 The FX 8350 comes with AMD's Wraith cooler. The Wraith cooler is not your typical stock cooler; it has two heat pipes, a nice copper base, and a large, powerful fan. You would have to spend at least $30 to buy a better cooler. 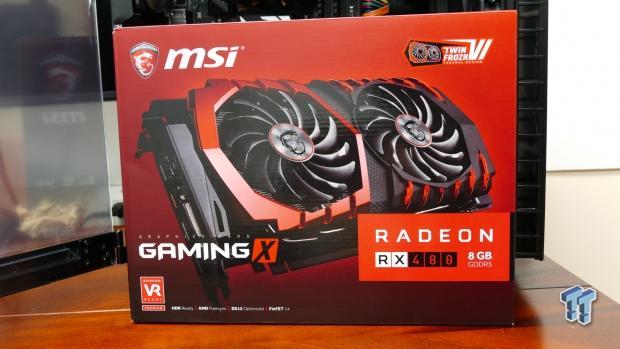 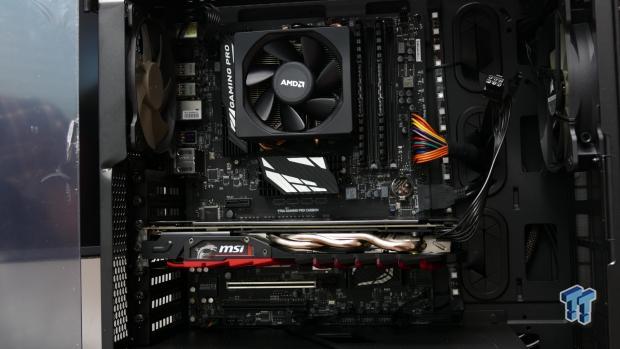 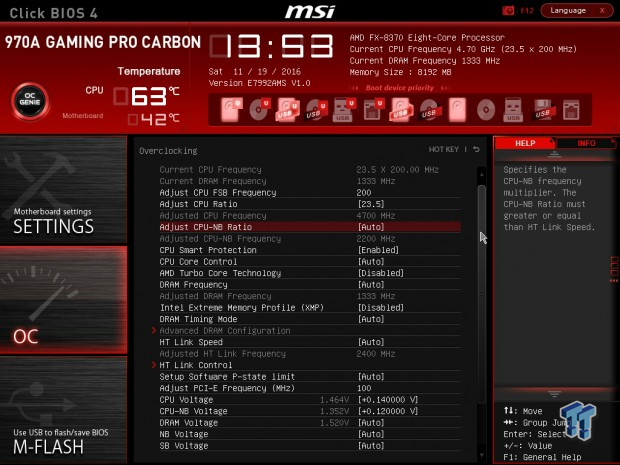 I gathered FPS at stock everything and then tuned both the CPU and GPU to see how far I could push the system. For tuning the CPU, I could have used a Windows program, but instead, I decided to tinker in the BIOS. I prefer overclocking with the multiplier since it's straight forward, so I increased it from 20 to 23.5 and disabled AMD Turbo Core Technology. 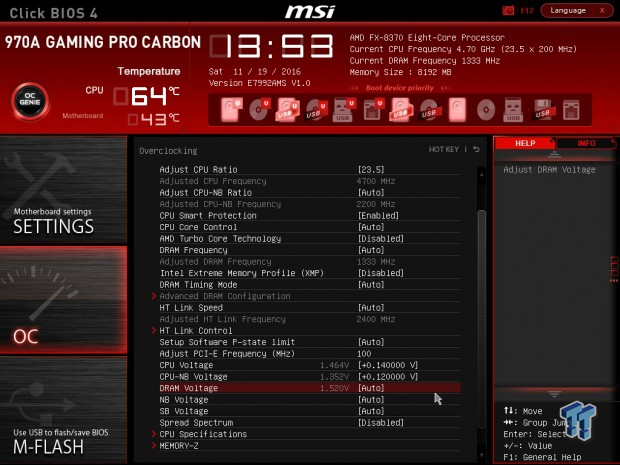 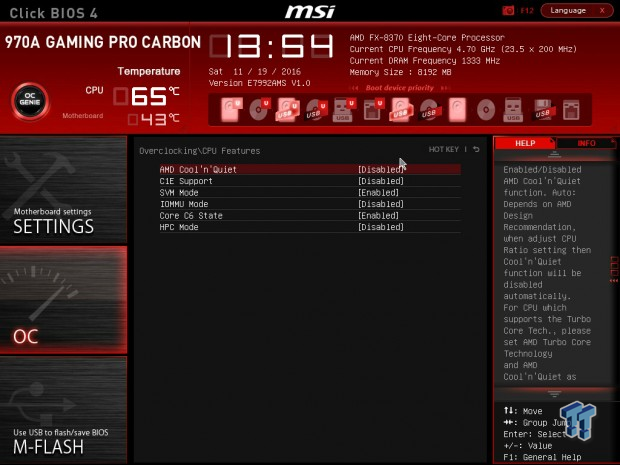 I also disabled AMD's Cool'n'Quiet and C1E. The MSI 970A Gaming Pro Carbon requires you to use an offset voltage to increase over stock voltage, I chose +0.14 for the CPU Voltage and +0.12 for the CPU-NB Voltage. To find the stock voltage, you need to reenter the BIOS after disabling AMD's Turbo Core Technology, so you remove the boost it provides when enabled. I could not go higher than +0.14 because I wanted to keep temperatures below 60C. 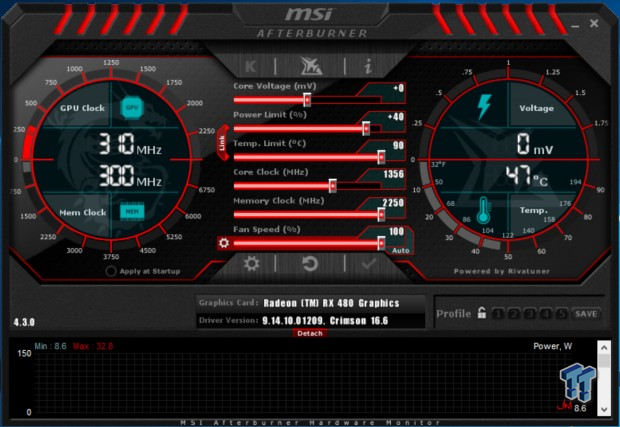 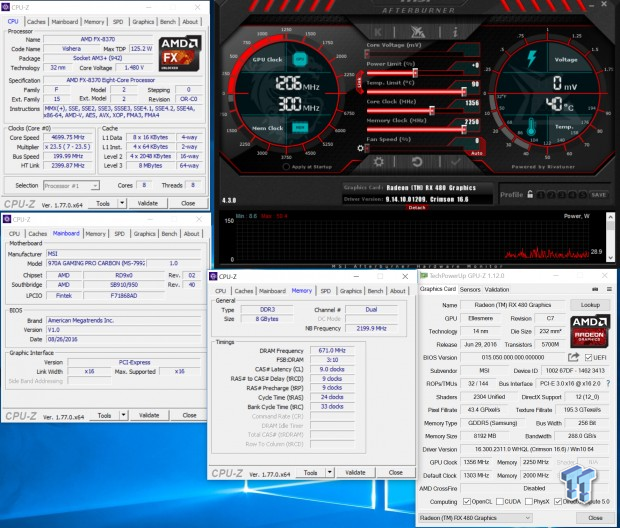 I used MSI Afterburner to overclock the GPU. I Increased memory clock to 2250MHz from 2000MHz and increased the core to 1356MHz. I also decided to boost the fan speed to its maximum to ensure stability; I was using a headset, so noise wasn't an issue.

Overclocked testing results are done with the CPU at 4.7GHz. 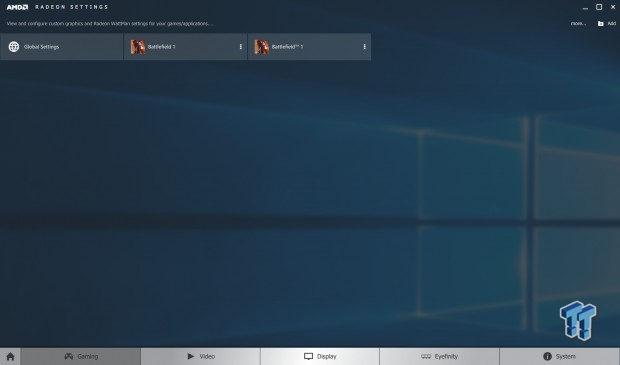 AMD's Crimson software suite is worth installing. You can even launch your games through the program, but the most interesting part of the program is a module called WattMan under Global Settings. 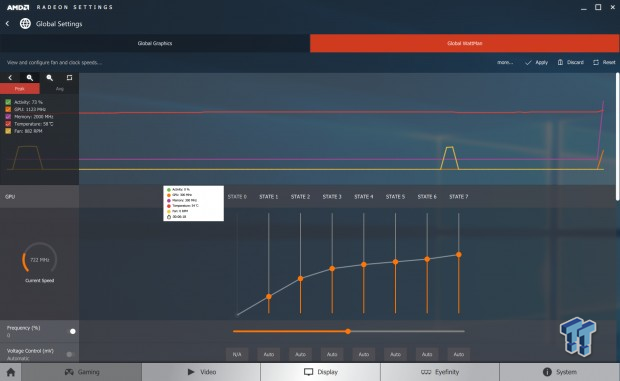 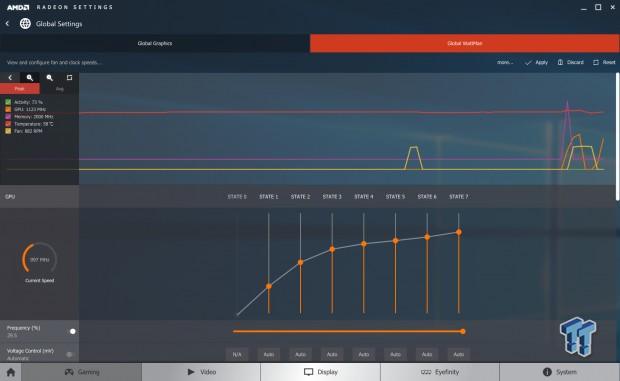 WattMan allows you to easily overclock the GPU with a single slider that sets different targets for different power states. 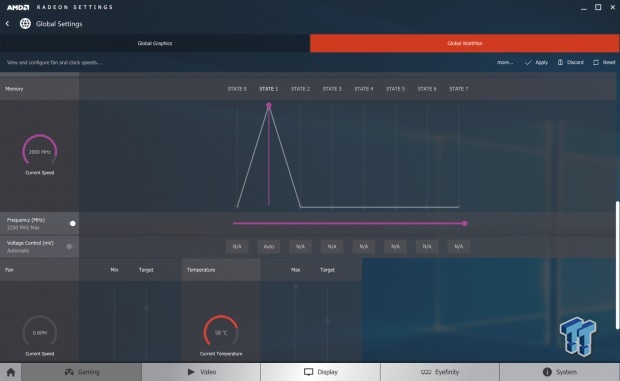 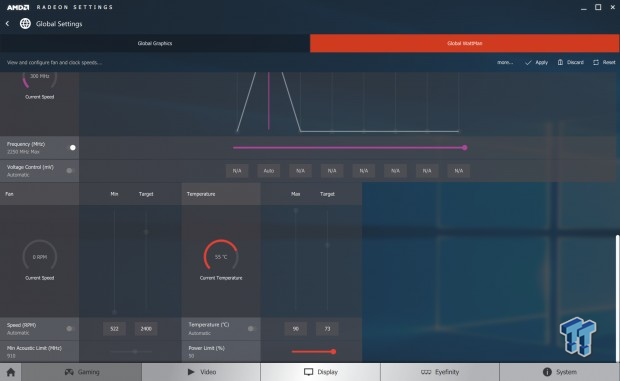 There are also settings to overclock the memory and control your fans. 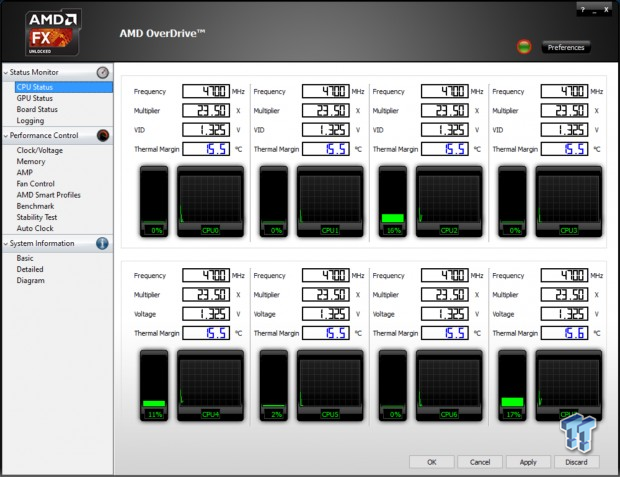 AMD's OverDrive software can be used to tune the CPU, and it allows per core monitoring. 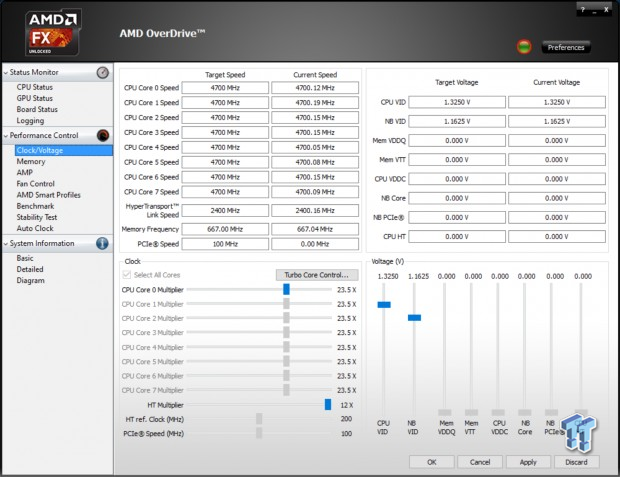 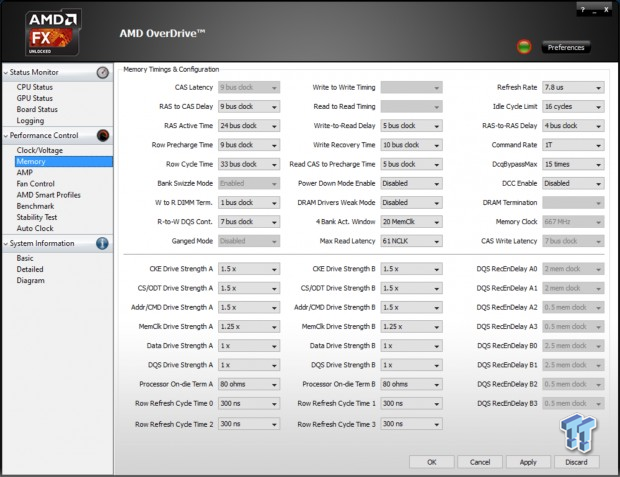 Per-core tuning and voltage sliders are present, as is memory timing control. Of course, some things require a reset. 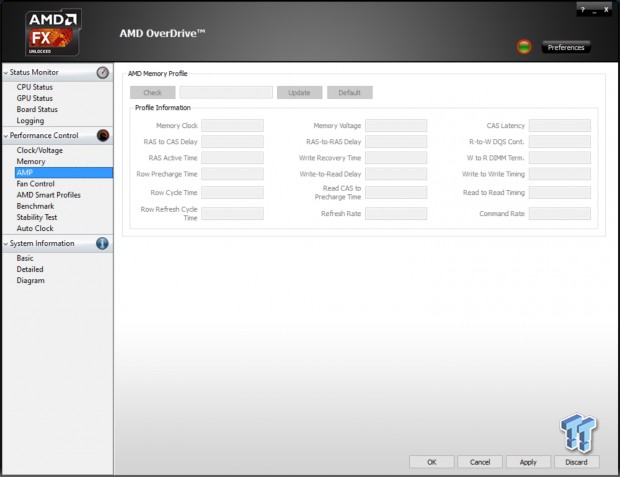 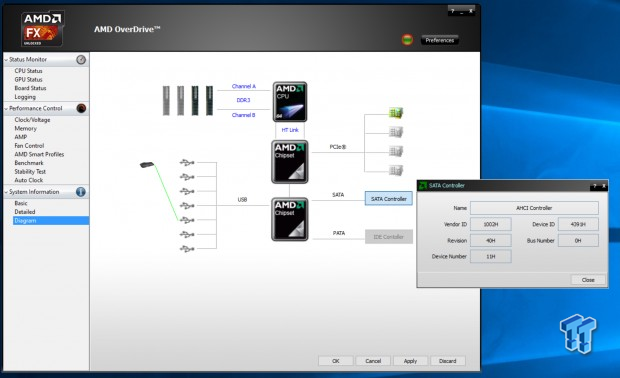 AMD Memory Profile (AMP) is also present if your module supports it. One other interesting part of the program is the ability to see a map of the system's buses and what is connected. 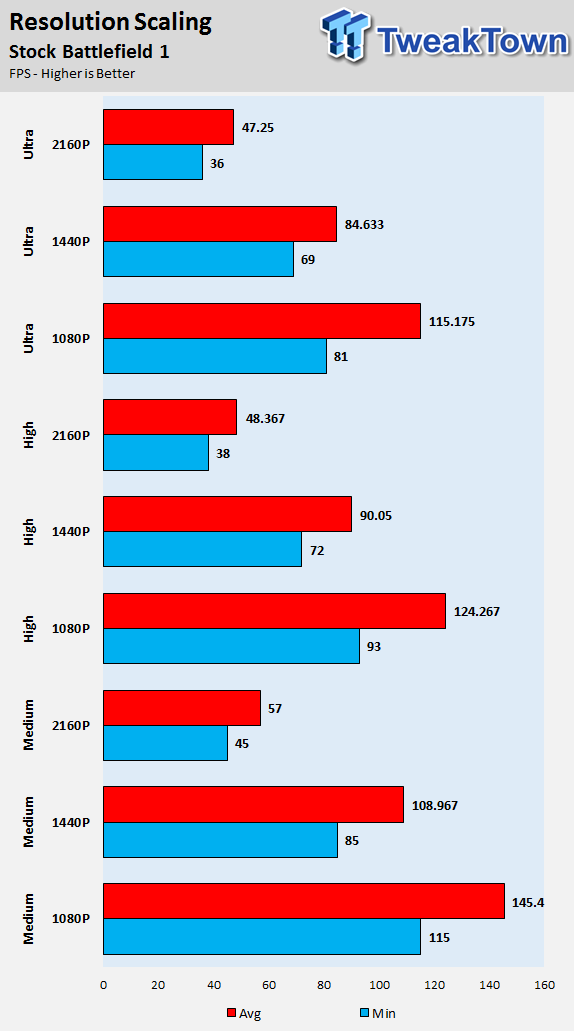 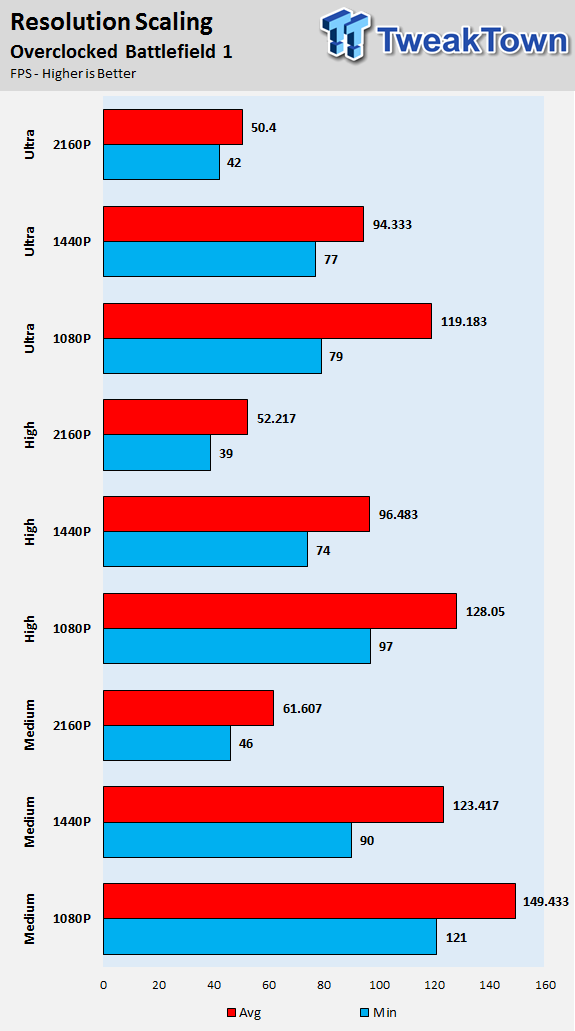 At Ultra/4K at stock, the game isn't very playable, at least not without FreeSync, which we will talk about later. Taking down the resolution really helps a lot at Ultra. Overclocking increased our numbers somewhat, the CPU overclock helped almost as equally as the GPU overclock, and we will compare those numbers later. 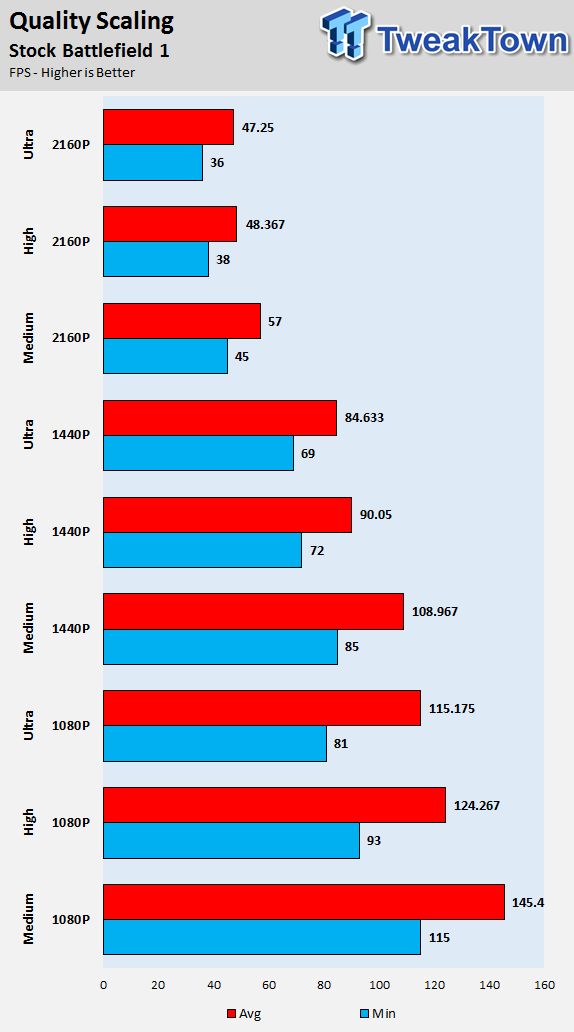 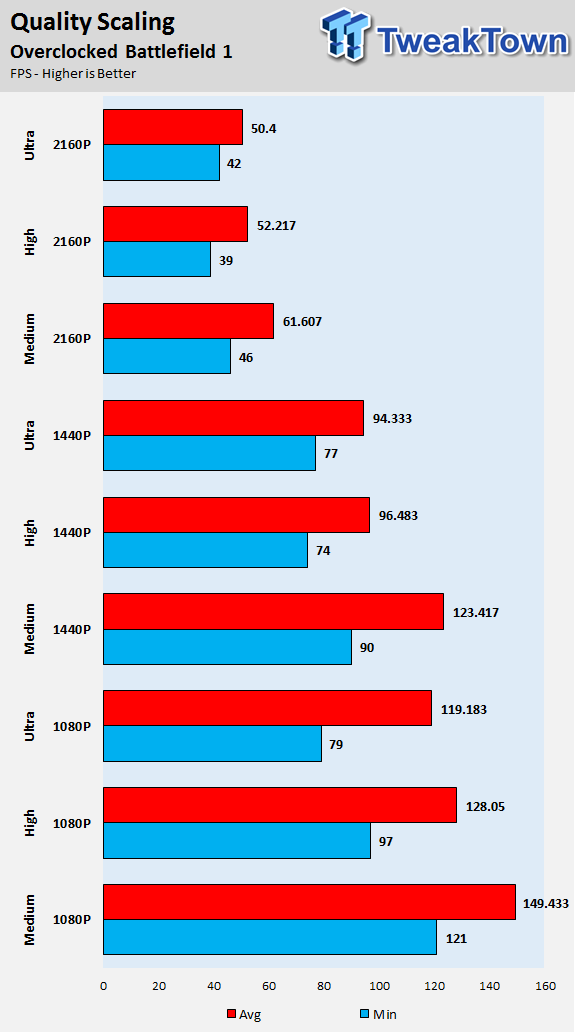 I then took the numbers and bunched them differently, scaling by detail rather than resolution so that we can see the impact of detail changes to playability. Lowering detail from Ultra to High only improves things by a few percent, but going from High to Medium helps a lot, and the game still looks great.

Comparing the stock and overclocked results shows very little increases in FPS in regards to minimum frame rates, but definite improvements when looking at average FPS.

Overclocking helps increase average FPS a lot more at 1440p and 1080p but gets things into the 60FPS range when at 4K/Medium settings, allowing you to play at 4K without FreeSync.

It is no secret that FreeSync monitors are outselling G-Sync monitors even though NVIDIA has more GPU market share. The reason is that FreeSync does not add much to the cost of the product like G-Sync does, making it much more affordable. Now, on my 4K monitor without FreeSync, I was not able to get satisfying frame rates at 4K at High and Ultra settings, even Medium was barely passable, low would be playable.

However, when I switched to my 1440p monitor with FreeSync, down-clocked the GPU and CPU to reduce frame rates down to the 40s minimum and 50s average, I was able to play the game without much annoyance. FreeSync really makes 45FPS look like 60FPS, and if I had it on my 4K monitor, I would venture a guess that High quality would be possible at 4K resolution with this setup overclocked.

The image above is of Battlefield 1 at 4K with Medium settings, and as you can see, it looks great. It is playable, but frame rates could be higher.

You really can build a great AMD PC for under $1000 that can play Battlefield 1 at 1080p and 1440p at the highest quality levels. If you want 4K, you are going to either buy a monitor with FreeSync, add in another RX 480, or upgrade to a Fury X.

Our configuration shows that AMD has a lot to offer in a sub-$1000 Battlefield gaming PC, and you can probably build it even better with some time and thought.