The Most Exciting GPU From AMD is Finally Here

AMD unveiled the new Fiji architecture at E3 2015 earlier this year, introducing three new video cards based on the Fiji architecture, all featuring High Bandwidth Memory (HBM). The flagship card was something that we had a world exclusive reveal on, the Radeon R9 Fury X, but it was the R9 Fury and R9 Nano that had us excited. 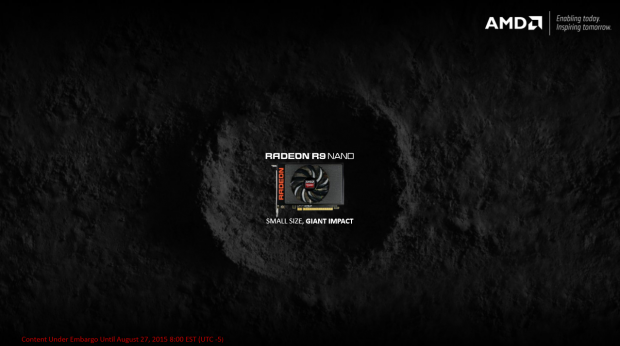 Later that month, AMD had an event in Sydney where we had some hands-on time with the Fury X and R9 Nano. The Fury X, while it was the flagship card, didn't impress us much because there didn't seem to be any large performance benefit to the use of HBM, and it also required a huge AIO watercooler. Personally, I think the use of these is cheap, unless there's a huge reason for it: such as a massive increase in performance over the GeForce GTX 980 Ti from NVIDIA. 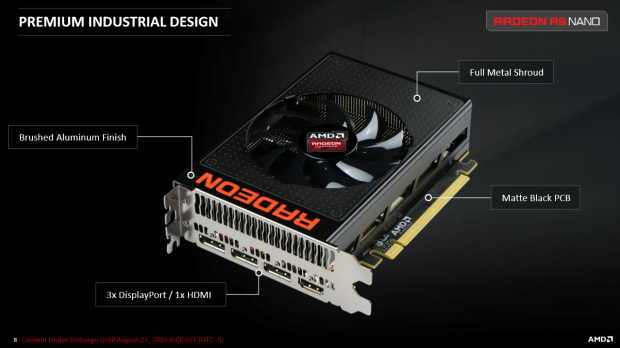 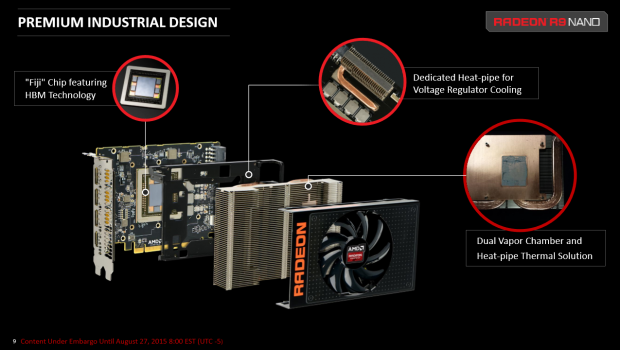 But, the Fury X wasn't the big splash that AMD made it out to be, with HBM not providing any real performance benefit. We did have a flagship video card that was much smaller than the cards near it, like the GTX 980 Ti or R9 390X, but HBM didn't make a difference in performance. Physical size is something that HBM helps with, something that AMD was able to use to their advantage.

Fast forward to today, where AMD has made the Radeon R9 Nano official. The benefits of HBM are on show again, with the Radeon R9 Nano being one of the smallest video cards on the market. Better yet, it's also set to be insanely quiet, offering better performance-per-watt than the Radeon R9 290X. This is quite exciting, as it's also going to usher in a new class of gaming PCs which are going to be incredibly small.

The new Radeon R9 Nano is quite the achievement for AMD, as it is one of the best examples of the benefits of HBM1. While HBM1 is limited to just 4GB right now, the R9 Nano is in a very specific place on the market, and for PC gamers. 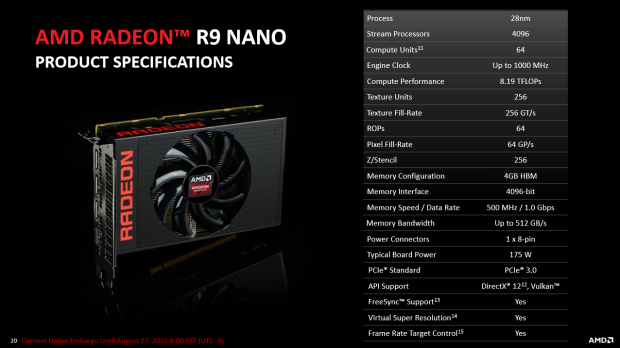 Starting with specs, the Radeon R9 Nano has virtually all of the technical specifications that the flagship Fury X has, starting with 4096 stream processors. We have 64 compute units, 256 texture units, and 64 ROPS. The Fiji GPU is clocked at up to 1GHz, while the 4GB of HBM1 is sitting at 500MHz with an effective data rate of 1GHz providing memory bandwidth of up to 512GB/sec.

The Radeon R9 Nano is built on the 28nm process, requires a single 8-pin PCIe power connector, and has a TDP of 175W. We have DirectX 12 and FreeSync support, Virtual Super Resolution support, and Frame Rate Target Control technology.

AMD's Fiji architecture is more of a refresh of the Hawaii architecture found in the R9 200 series, and the rebranded R9 300 series. We have the aforementioned support for DirectX 12 and Vulkan APIs, VSR, FRTC and FreeSync. 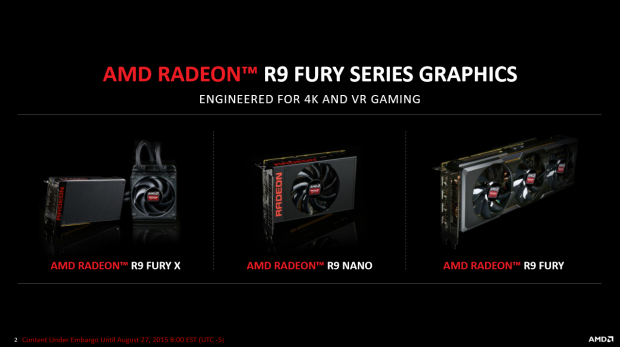 The 4GB of HBM1 is located on the Interposer, right next to the Fiji GPU itself. This saves a considerable amount of room on the PCB, as well as reducing the power and increasing the memory bandwidth. The Radeon R9 Nano features a standard cooler, ditching the massively annoying AIO cooler that the Fury X included.

So, now we have the R9 Fury X at the top end of things, the R9 Nano which is built by AMD, and finally the R9 Fury which goes out to AIB partners to play around with exotic coolers. We've only had our hands on the SAPPHIRE Tri-X R9 Fury, and thought it was a better overall card than the Fury X. But what about the R9 Nano? I think it's the most exciting card of the three that is powered by Fiji and HBM. Let's continue over the next few pages and learn more about it.

Boasting the full Fiji GPU, 4GB of HBM, and the same display output configuration, the R9 Nano is an incredibly powerful offering from AMD. While AMD's marketing is strangely comparing it against the R9 290X, and not the new 390X, the company is showing that its new card is better than a card that is nearly two years old now. 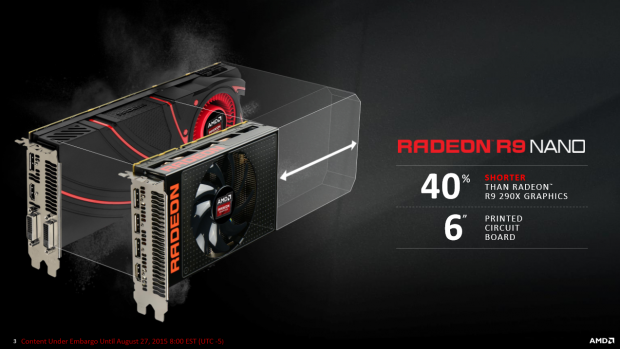 But all-in-all, the R9 Nano is an incredible achievement for AMD, showing off the true potential of High Bandwidth Memory - giving us the ability of super-small, but super-powerful video cards.

The AMD Radeon R9 Nano features the same 4096 stream processors as the Fury X, and the same 4096-bit memory bus with 4GB of HBM on-board, which makes it a very quick video card and something that shouldn't fall too far behind the Fury X. 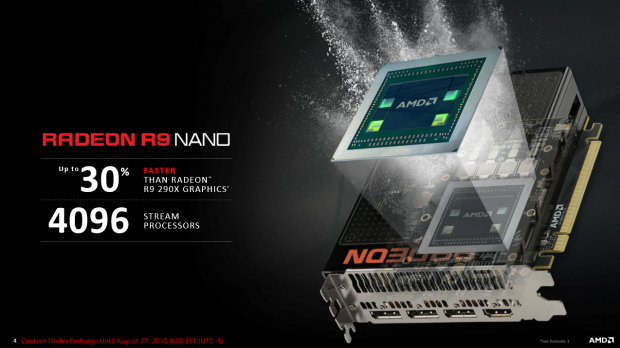 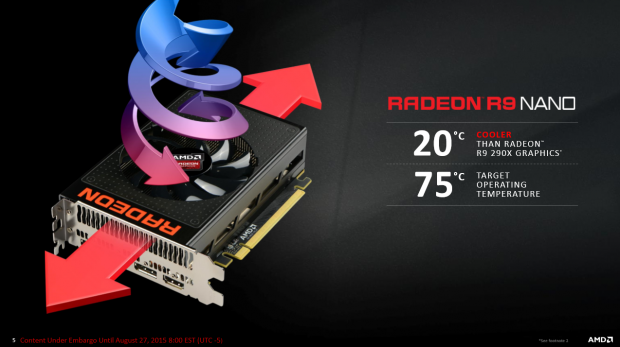 One of the biggest improvements that the R9 Nano has over the R9 Fury X and the R9 290X is in the performance-per-watt part of the card. Thanks to HBM, the R9 Nano has a TDP of just 175W. Compare this to the 290W of the 290X, this is a huge saving in power consumption. 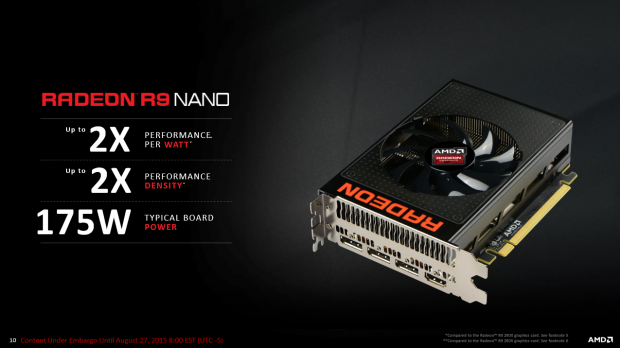 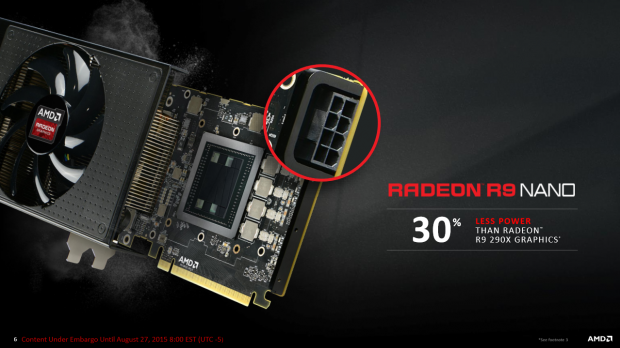 New Super-Small Gaming PCs are on their way

The biggest benefits of High Bandwidth Memory, at least in its first iteration under HBM1, are the massive physical space you save on the PCB.

The Radeon R9 290X is a long card, but it's not as long as the behemoth that was the R9 Fury. The R9 Fury had air cooling on it, as the R9 Fury X required an AIO water cooler. The R9 Nano, on the other hand, features more horsepower than the R9 290X, but uses much less power.

While HBM1 doesn't really provide any performance benefits, the size of the card should be a big benefit to some gamers. It allows AMD to get its technology into PCs that it would normally not be inside of, and to provide gamers with a card that can handle 4K 60FPS gaming without a problem, in a case that is radically smaller than the traditional gaming PC chassis.

A New Class of Gaming PCs is on the way

Thanks to the R9 Nano being so small, we're going to see all sorts of new gaming PCs in the wild. Gone are the days of requiring some gigantic chassis for your gaming PC, as the AMD Radeon R9 Nano is going to provide gamers with a very important option of building a super-small, but ultra-powerful gaming PC. 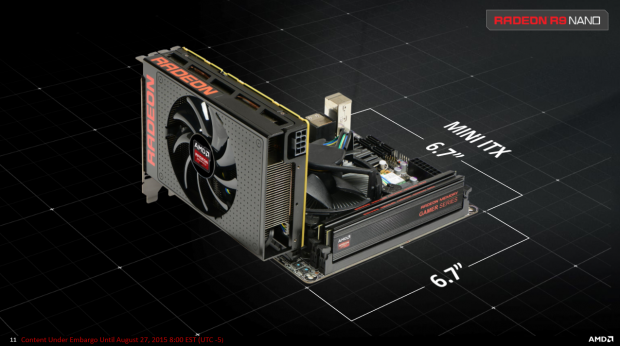 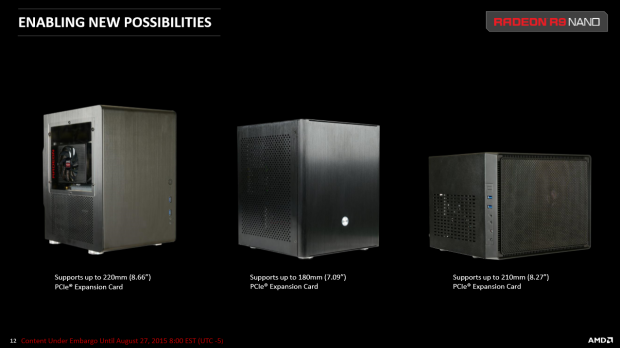 Those days are over, as the R9 Nano is the start of HBM-powered video cards that will see gaming PCs shrinking down to console size. This is a big reason for me writing this 'preview' article on the R9 Nano, as I believe that the physical size of the card is the biggest point of it. Sure, we need performance that's up to scratch, but providing R9 290X or equivalent performance was always going to be enough. 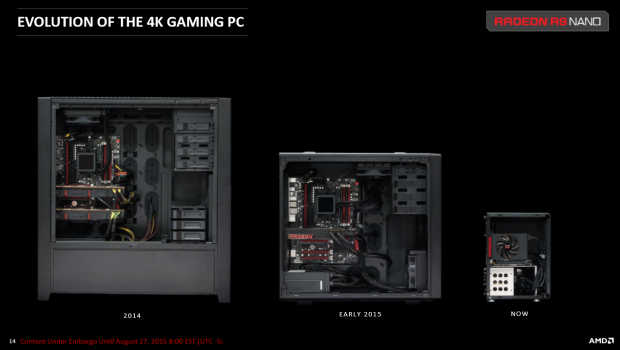 As you can see, just last year had enthusiasts and high-end gamers buying big towers to fit their multi-GPU setups. Earlier this year (but not early 2015 as AMD describes in the above image), we have gaming PCs powered by smaller cards like the Fury X. But now, we can have gaming PCs that would have never been possible with the R9 Nano.

I haven't talked much about performance because that's something that I would personally like to look at, before passing judgement. AMD has burnt users with the bragging rights over Fury X, but I think the R9 Nano is a card that is much closer to reality. 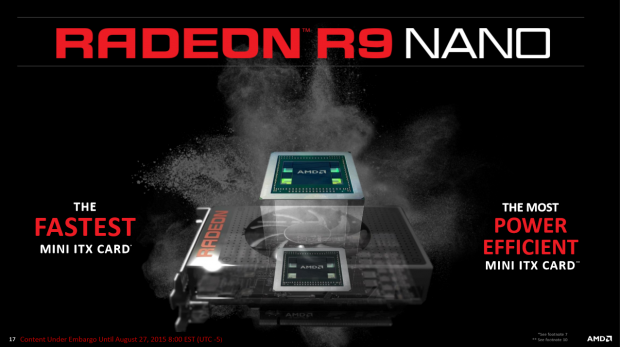 AMD is in a position where if it markets this card right, and can get it into smaller gaming PCs, we could see a big splash from the R9 Nano. We're just about to enter the world of consumer VR headsets, where people will want to have gaming PCs in their living rooms that are capable of delivering 1080p at 90FPS or more. This level of performance is something that the R9 Nano is capable of providing.

Second, Steam Machines are due in November. If AMD can once again position itself, with enough cards to sell, this is going to be a big deal for the company. AMD has struggled against NVIDIA over the last two years, with NVIDIA just one-two punching them constantly. The launch of the Fury X and the R9 390X was not enough to stop NVIDIA, and while the R9 Nano won't stop NVIDIA's onslaught either, it is offering gamers a card that NVIDIA simply do not have right now.

NVIDIA has no card that is close to the size of the R9 Nano and while the GTX 950 is close, it's not close enough. AMD still has various issues to sort out: its marketing, and its driver team. We have only had a couple of good drivers from AMD in the last year or so that have been WHQL certified, whereas NVIDIA are constantly releasing new WHQL-signed drivers.

But the Radeon R9 Nano is a step in the right direction. Let's just hope that our exclusive story on there only being 30,000 HBM-based cards released this year not be true, and that AMD is capable of pumping out a huge number of R9 Nano cards for gamers across the world. Expect our full review of the AMD Radeon R9 Nano in the next week or so.