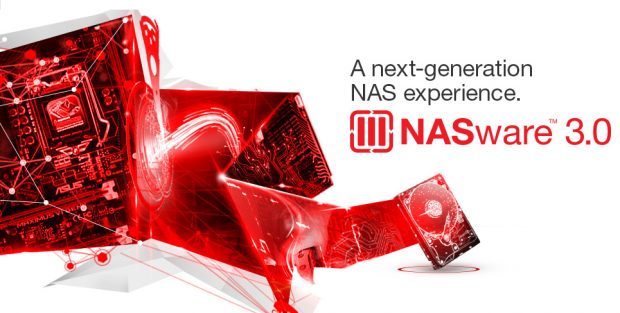 As you and I know, network storage is something the major vendors have really focused on for the last few years. Western Digital started the purpose-built drive trend, launching the one through three terabyte WD Red, and then subsequently adding the 4TB model. About a month ago, Western Digital took the wraps off the five and six terabyte WD Red NAS specific hard drives. With these new solutions, WD also upgraded its flagship NAS tuned firmware, NASWare, to version 3.0.

With the latest incarnation of NASWare, Western Digital has tuned the firmware to allow the WD Red to be deployed into NAS solutions up to eight bays. Advancements with StableTrac, securing the motor shaft at both ends to reduce overall vibration, and 3D Active Balance and dual plane balance control technology, enhance performance and reliability of the drive, in the harsh 24/7 environment of network storage.

In the lab today, we have four 6TB WD Red drives setup on our Intel Z97 test system. RAID modes included in this article are 0, 5 and 10, which should give you an idea how these drives perform outside the traditional NAS solution, while still being in RAID. For those that enjoy building their own storage server, this should aid in your decision on what drives you want to deploy. 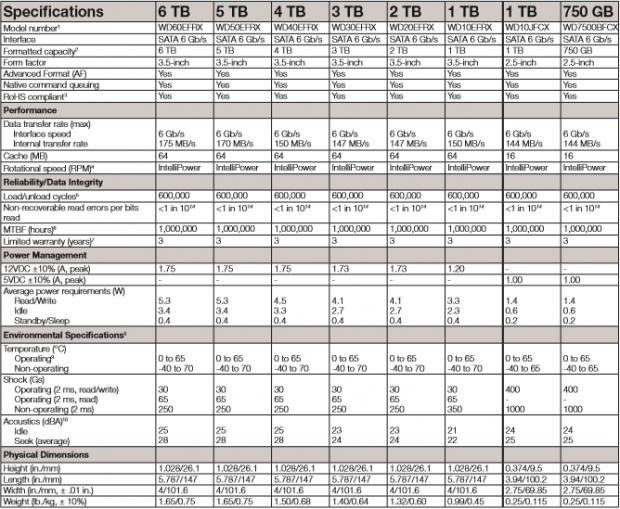 Above, we see specifications for the WD Red. As you can see, the chart above encompasses all capacities ranging from 1TB to the newly introduced five and six terabyte models. For the article, we focus on the 6TB model, which we find using a SATA 6Gb/s interface with a sustained transfer rate of 175 MB/s.

Cache is listed at 64MB, while the spindle is controlled by WD's IntelliPower technology. Load/Unload cycles are listed at 600,000, with a MTBF of one million hours, moving to power consumption the 6TB WD Red is spec'd to use 5.3 watts during read/write operations and 3.4 watts at idle.

Our consumer storage-testing platform consists of the following components: 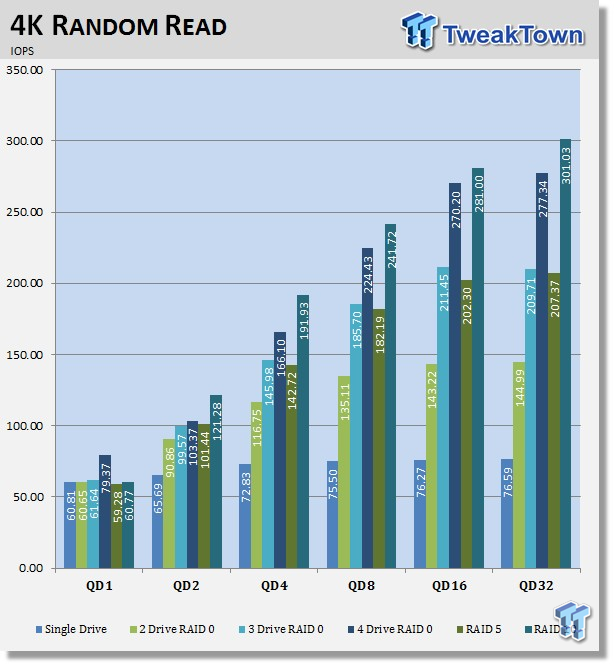 In random read, we found the drives to scale quite well in RAID 0. On the other hand, RAID 5 performance was similar to our three-drive RAID 0, and RAID 10 topped the charts at 301 IOPS. 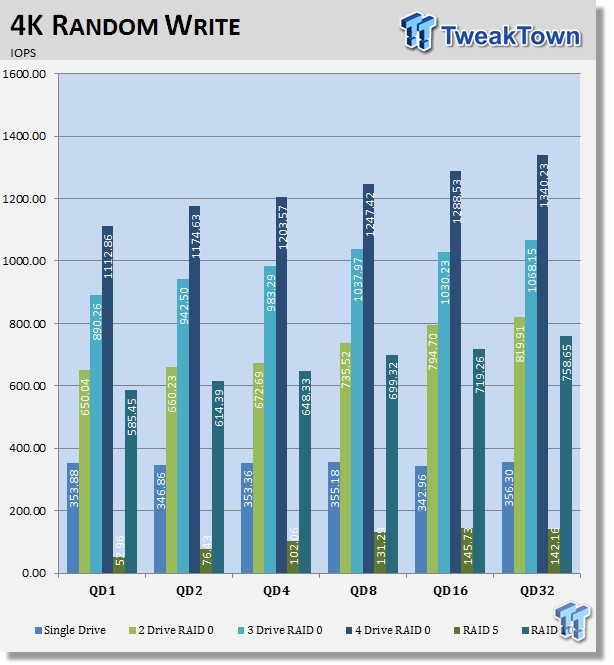 Random write again scaled quite well within RAID 0, while RAID 5 performance was lower than a single drive, and RAID 10 was equal to a dual-drive RAID 0 array. 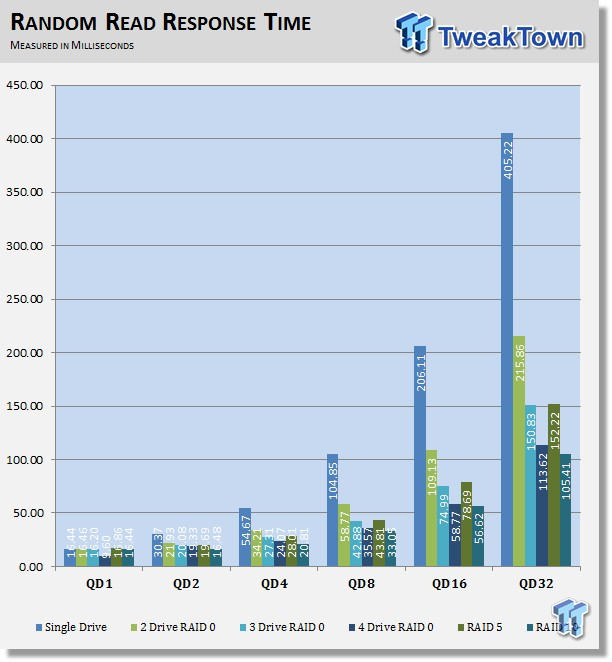 Read latency for the single drive came in at 405ms at QD32, while adding another drive for a RAID 0 array halved the response time down to 215ms. RAID 5 and 10 came in at 152ms and 105ms, respectively. 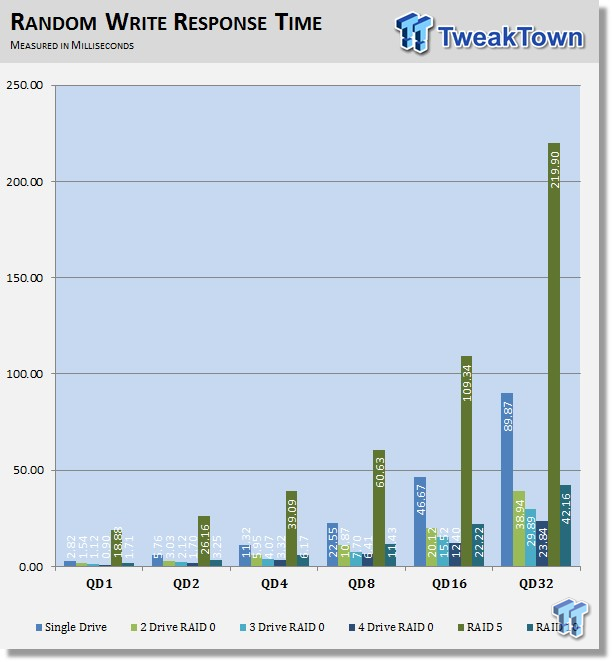 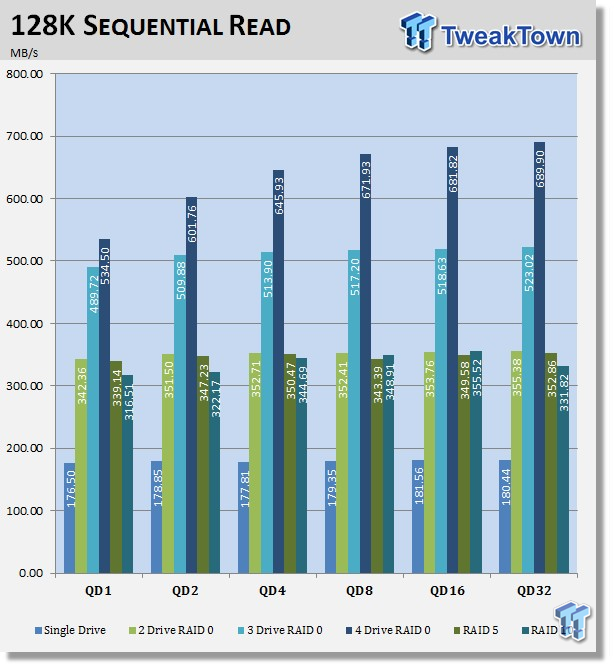 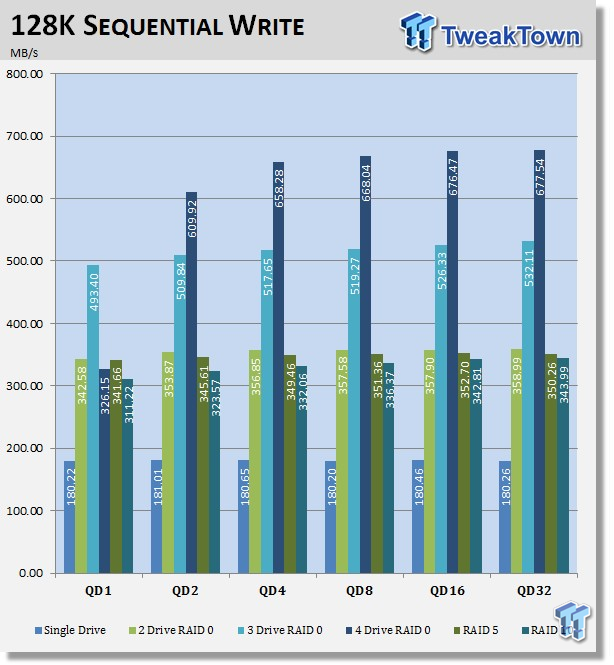 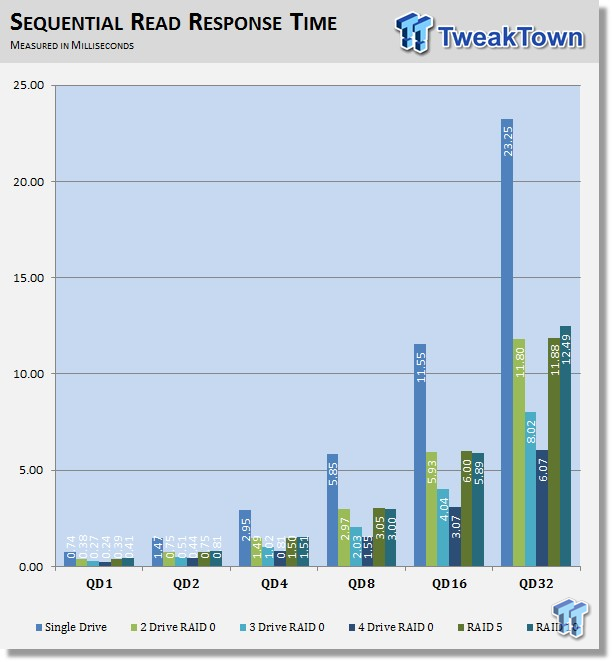 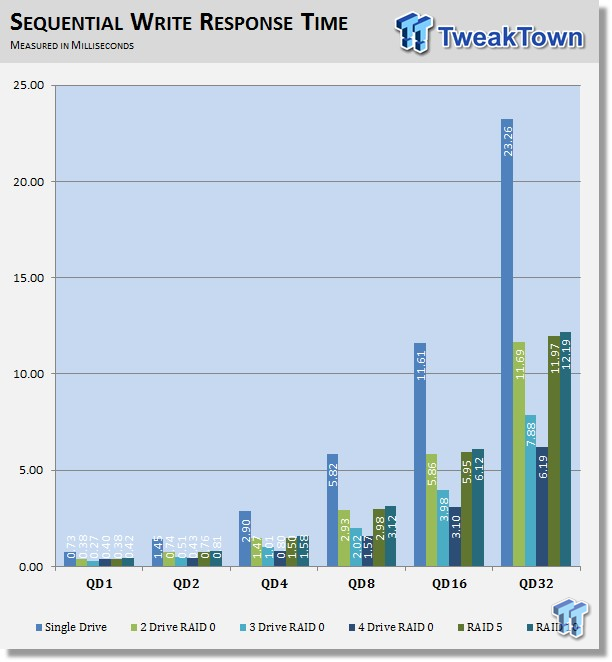 Write latency was quite similar to the read latency with the four-drive RAID 0 landing at 23ms. The RAID 5 and 10 arrays came in at 11ms and 12ms, respectively. 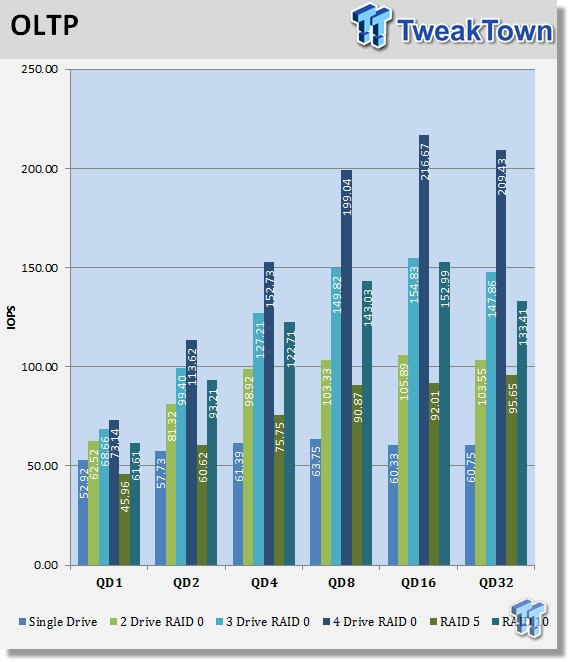 In our first mixed workload, OLTP, we found the four-drive RAID 0 topping the chart at 209 IOPS. The RAID 5 and 10 arrays followed at 95 IOPS and 133 IOPS, respectively. 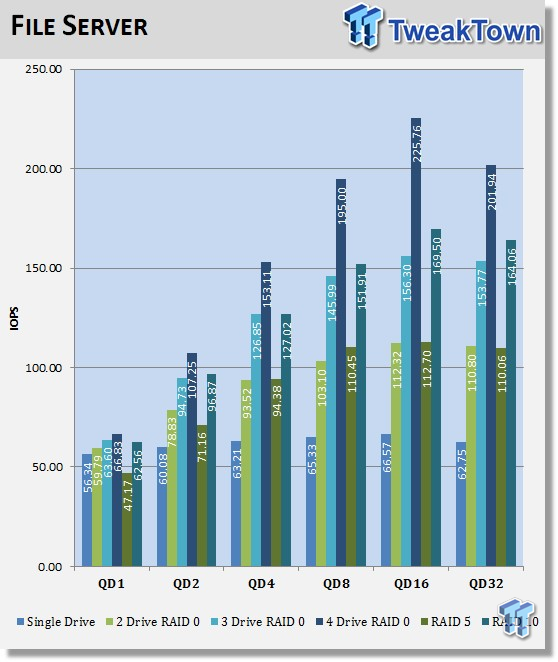 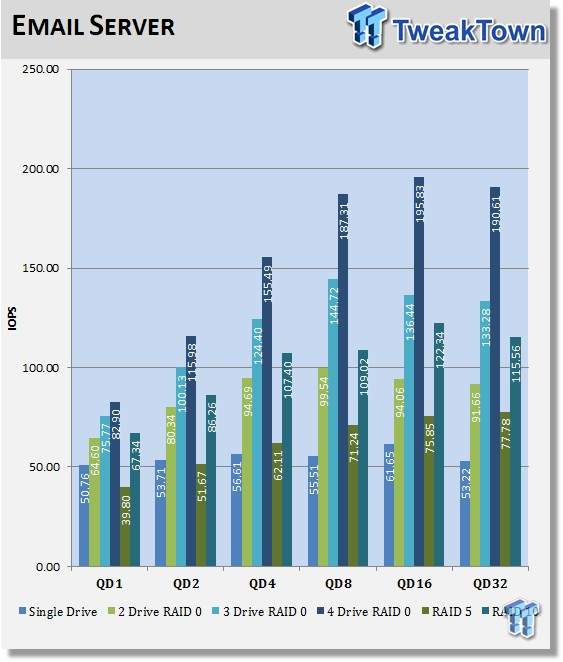 Email server had each of the RAID 0 arrays close together, from the single drive at 53 IOPS to the four-drive array at 190 IOPS. With the RAID 5 and RAID 10 arrays, we found performance at 77 IOPS and 115 IOPS, respectively. 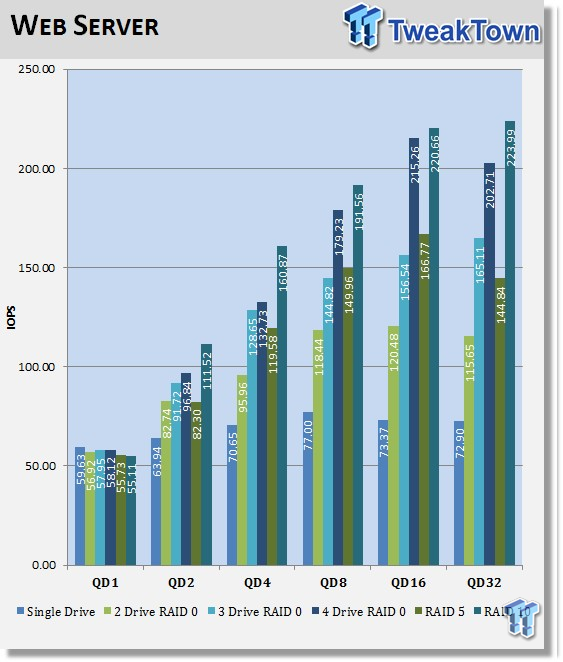 Web server was by far the highest performing test for all the arrays. The four-drive RAID 0 was passed by our RAID 10 array by a margin of 21 IOPS. 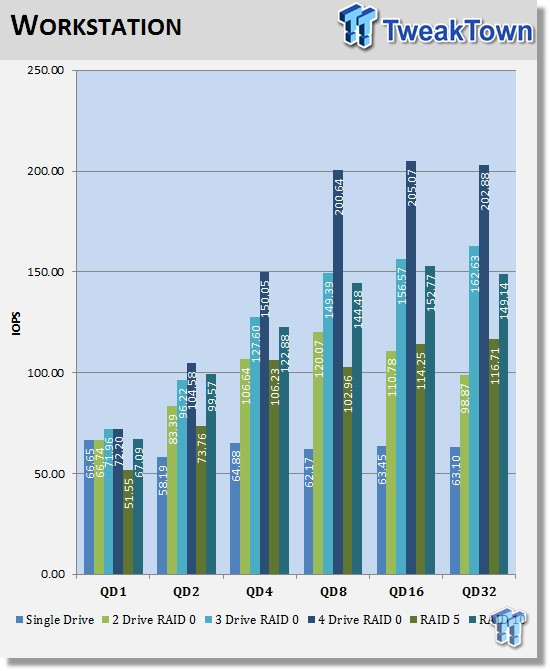 Workstation had the RAID 0 arrays scaling quite well. The single drive setup touched 63 IOPS, while the four-drive setup reached 202 IOPS. With the RAID 5 and 10 arrays, results came in at 116 IOPS and 149 IOPS, respectively. 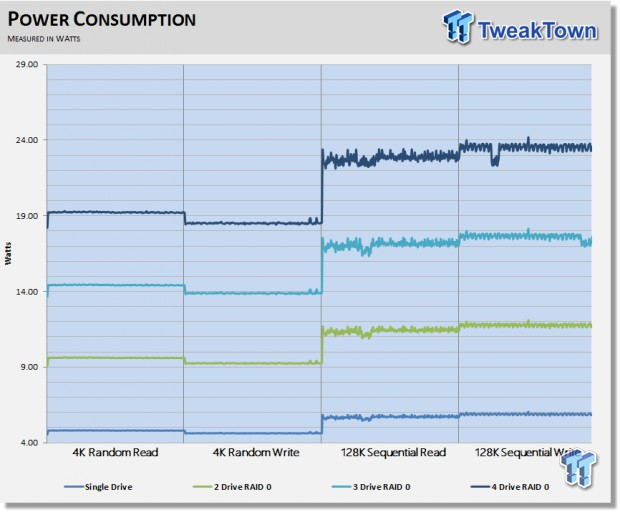 Looking over our power consumption results, we found the 6TB WD Red to scale almost linear as each drive was added to the array.

In a single drive configuration, we found peak power consumption to reach around 5.5 watts, while two and three drive arrays touched just over 11 and 17 watts, respectively. Our four-drive array power consumption peaked at 24 watts during sequential write.

Back in April of this year, we had the chance to take four 4TB WD Reds and throw them together for a RAID report. In that report, we found those drives to peak around 550 MB/s in a RAID 0 array, while producing nearly 1100 IOPS in our 4K testing.

With each generation there tends to be performance improvements, and at the same time, tradeoffs for that performance. With the new WD Red 6TB, it is quite clear the firmware has been tuned for sequential performance over random read and write. With the last generation of Red, the 4TB we reached 1100 IOPS in our RAID 0 array, while this generation managed only 277 IOPS. Moving over to sequential, where we believe many performance efforts went with the latest solution, we found the Red 6TB reaching 689 MB/s over the 550 MB/s of the 4TB NAS solution, in a four-drive RAID 0 situation.

Another place where performance increased was power consumption. For instance, the 4TB Red in a four-drive RAID array peaked at 22.5 watts in sequential write testing back in April. Today, in our four-drive RAID 0 array with the 6TB solution, we found the drives to peak just below 24 watts. Additionally, if we move to the other side of the isle, the Seagate Desktop 6TB used 20 watts in a two-drive configuration when we tested them just a month ago.

Now, that's not to say Seagate won't make improvements if they do unveil a 6TB NAS solution, but if the 4TB NAS and Desktop kits told us anything, we know Seagate tunes their solutions for performance over power consumption.

Overall, I am quite surprised by the improvements WD has made with the purpose-built Red when it comes to performance, and at the same time also power consumption. After all, with the 6TB Red, the possibility to gain 30TB of storage capacity (RAID 0) in a five bay appliance, with minimal power impact, makes this solution top notch in my mind.