The introduction of the Dell P2815Q into our main video card testbed environment meant that we really had the ability to expand our testing suite. If you don't know yet, the Dell P2815Q is a 4K resolution monitor that hits at an extremely affordable price tag. It's absolutely fantastic for our test system; it's not expensive, and since it's really only used for benchmarking, it doesn't have to be the best of the best when it comes to quality. All we really need it to do is output 4K resolution or, in other words, 3840 x 2160.

That's great news because I hate the monitor. Hate might be a bit of a strong word, but the bottom line is I would never buy this monitor for myself. The fact that it does 30Hz at 3840 x 2160 is disgusting. Not just for gaming, though. Even moving the mouse around is not pleasant at all. What the monitor has done, though, is made me realize I want to replace my center Dell U2711, a 2560 x 1440 IPS monitor, with a new 4K one. Unfortunately, just not the Dell. Instead, I am eyeing the ASUS PB287Q 60Hz monitor.

4K is really cool, and looking at games running at the resolution is just beautiful. Today, though, we need to find out just how the performance at this resolution is with two setups. The first is a single Sapphire R9 295X2 8GB. The second is a pair of Sapphire R9 295X2 8GB cards running in CrossFireX. This is the first of many 4K Showdown articles that focus on what will be primarily a pair of cards going head to head. After this one, two more articles will include a 3GB and 6GB NVIDIA GTX 780 and a 3GB and 6GB AMD R9 280X.

We're really looking forward to see if we can make use of these massive amounts of video memory being offered by companies. Today, though, is all about the R9 295X2 8GB, so let's not delay any longer and take a look at our Test System Setup before moving forward.

We won't say much here as there's really not much to say because we covered so much in the introduction. The main focus here today is the performance of both one and two R9 295X2 8GB video cards running alone and in CrossFireX at the ultra-high 3840 x 2160 4K resolution.

Our benchmark line up is slightly cut down due to the fact that not everything can be tested at this resolution. Primarily, we mean the likes of 3DMark because it is unable to give a score at this custom resolution. Before we move on, looking below, you can see that CrossFireX is indeed not an issue, and all 4 GPUs are detected. 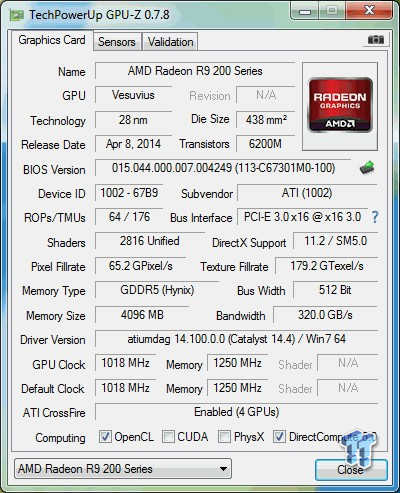 Version and / or Patch Used: 3 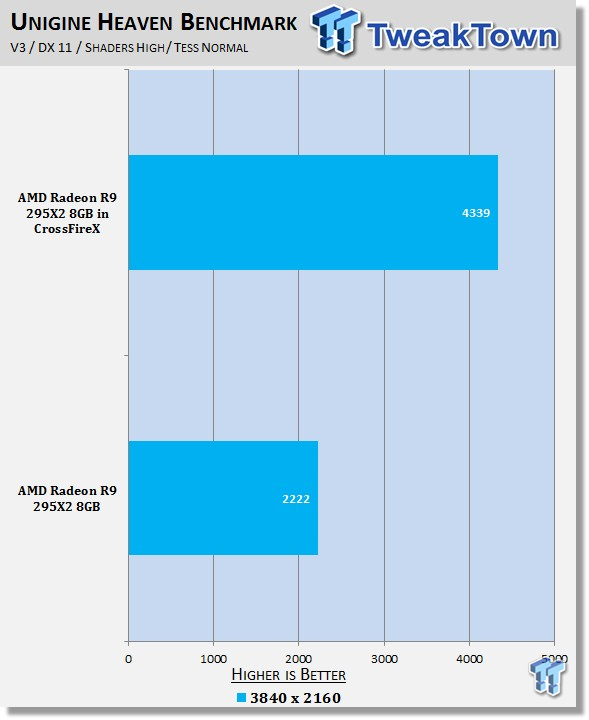 Starting off with Unigine Heaven today, you can see that CrossFireX has absolutely no issues working here. Considering the resolutions, over 4,000 points is a massive score. Of course, we'd expect nothing less from a setup that will set you back over $3,000. 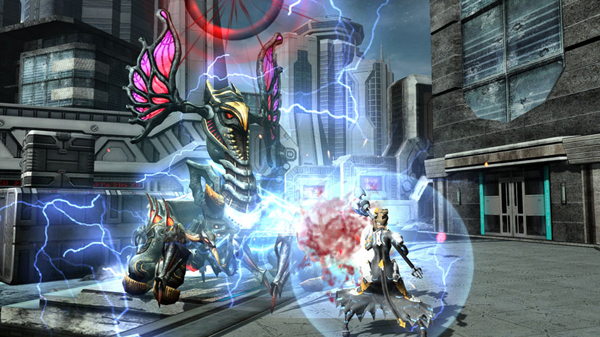 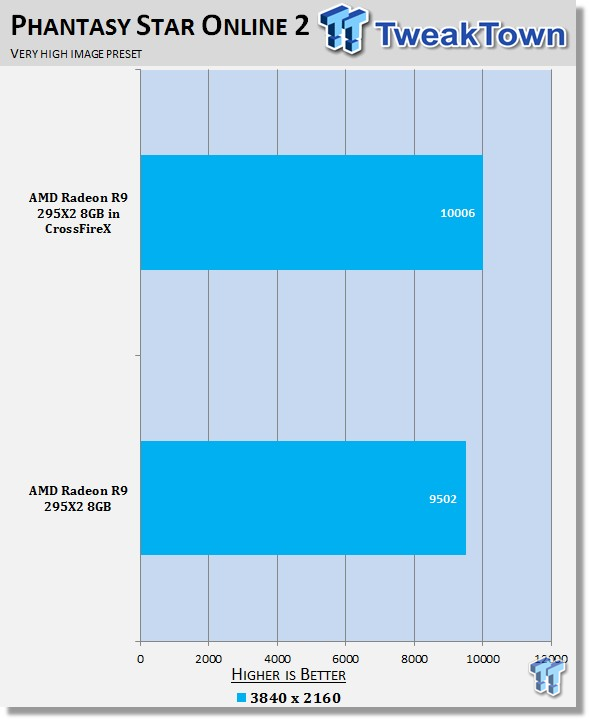 While PSO 2 is able to output a score that is more than capable, you can see that CrossFire does little for performance, and the massive $3,000 setup gives us only a slight boost in performance. 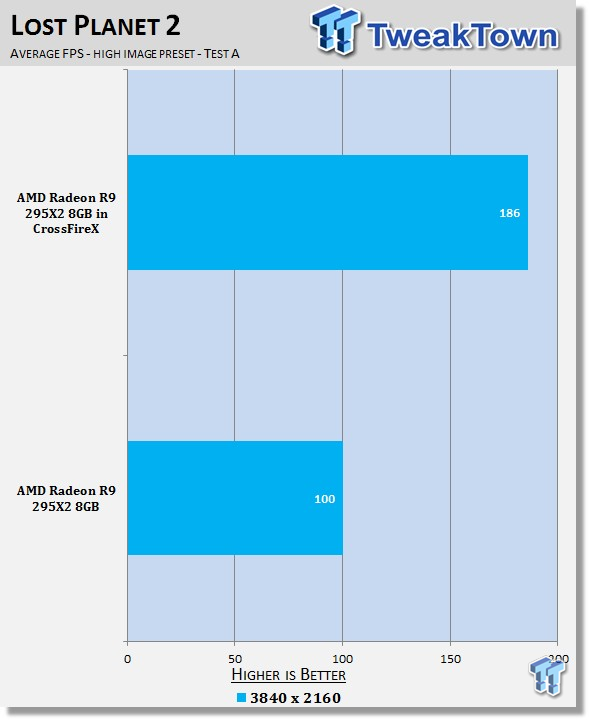 A single R9 295X2 8GB is able to score a strong 100 FPS at the massive resolution. Looking above, though, you can see throwing the second card in to the mix boosts our FPS 86 percent to a 186 FPS average. We're clearly prepared for 120Hz 4K monitors in these older games. 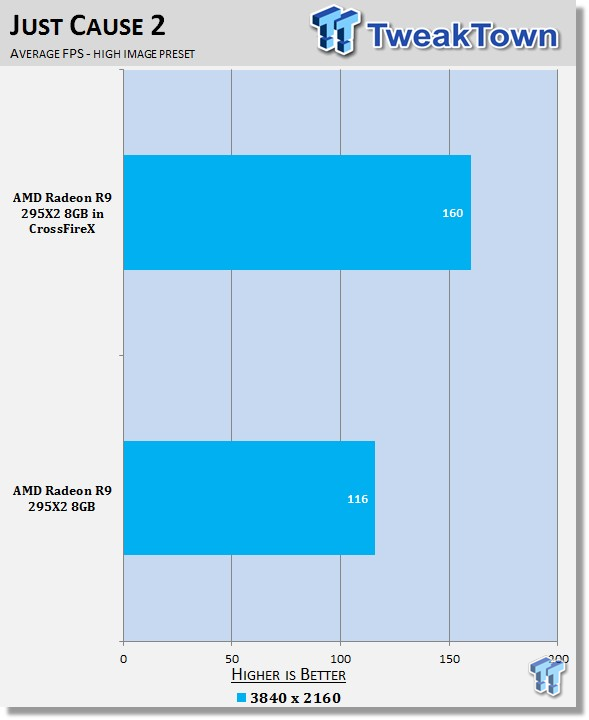 Just Cause sees some strong FPS and strong gains when throwing the second card into the mix. You can see that they're not quite at the same level as we saw under Heaven and Lost Planet 2. Like above, though, you can see that we're at least ready for those 120Hz 4K monitors that are bound to hit one day. 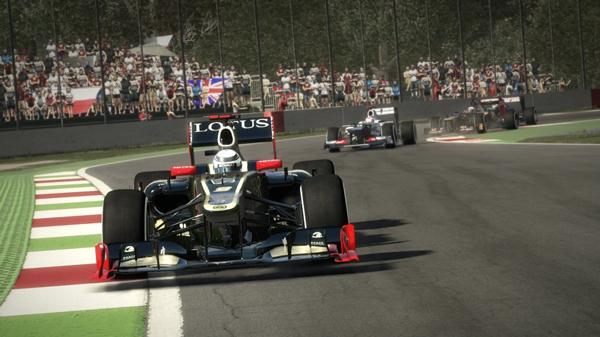 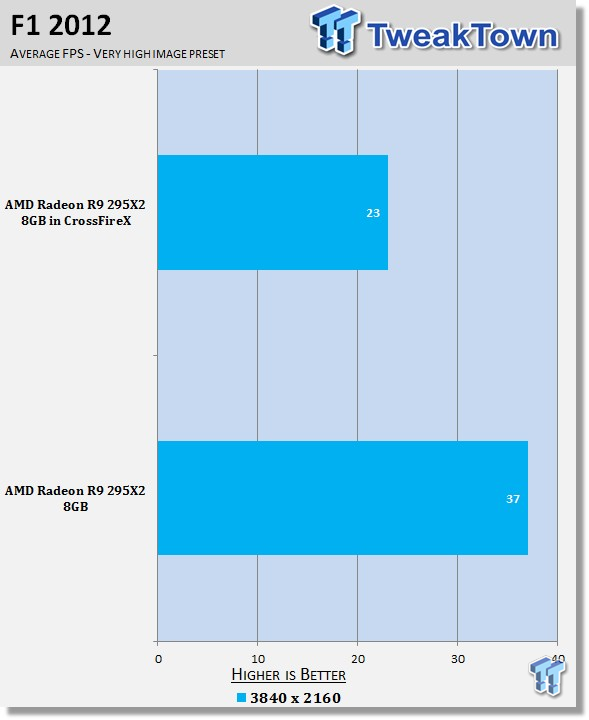 With no love for CrossFire, you can see that the picture goes from bad to worse as the setup just offers us horrible FPS. F1 2012 will most likely be the game that gets replaced in our next upgrade of games as it's extremely CrossFire unfriendly. Additionally, we can't deny that it's getting a little long in the tooth these days. 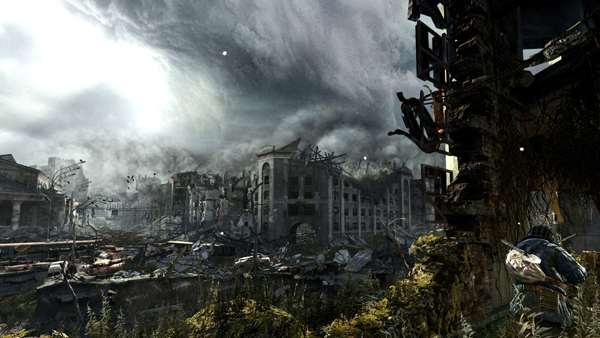 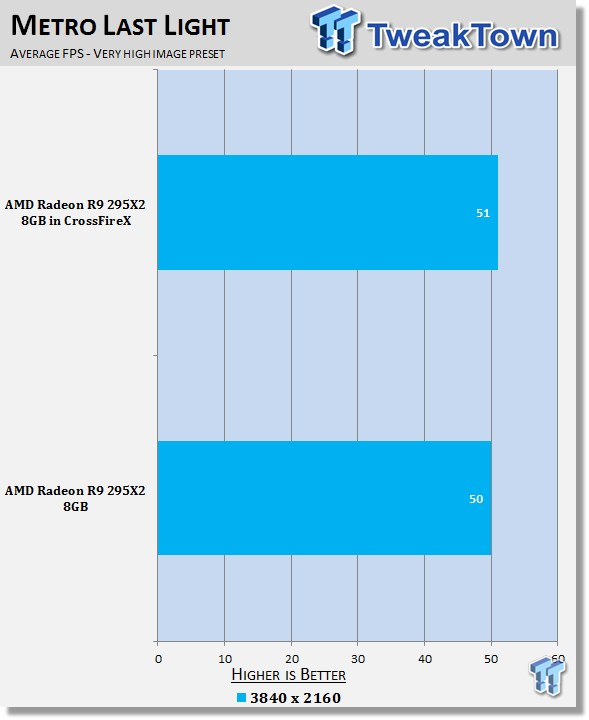 It's really disappointing to see that not only does adding the second card into the mix not improve performance, but it also sits below that playable 60 FPS number we demand when it comes to our overall average. 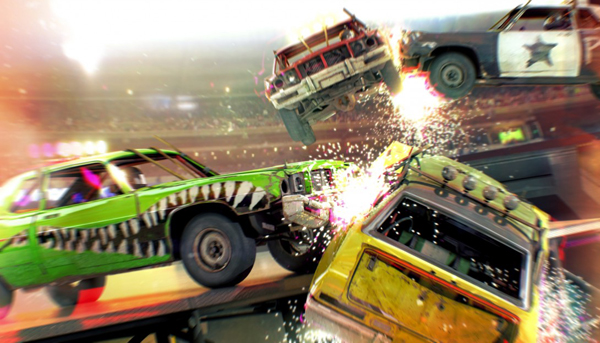 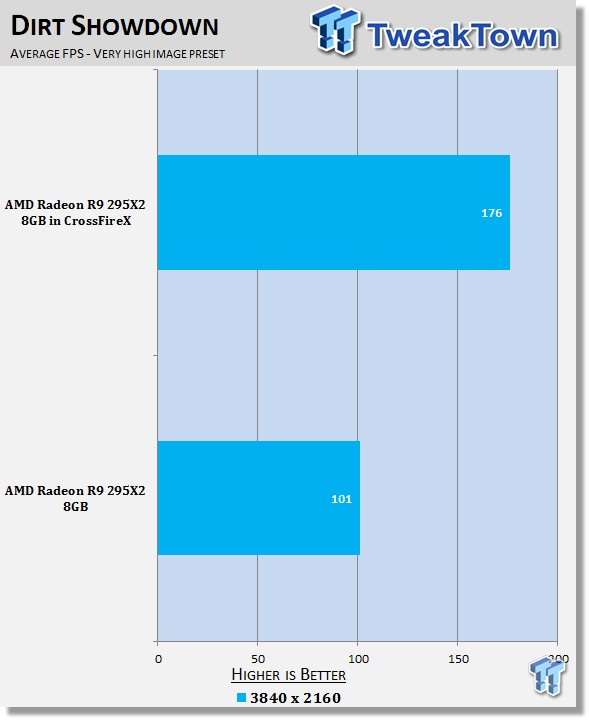 Dirt Showdown performance looks great with both setups here. Adding the second card into the mix gives us a 75 percent increase in performance, and you can see that $3,000 brings home almost 200 FPS at this ultra-resolution. 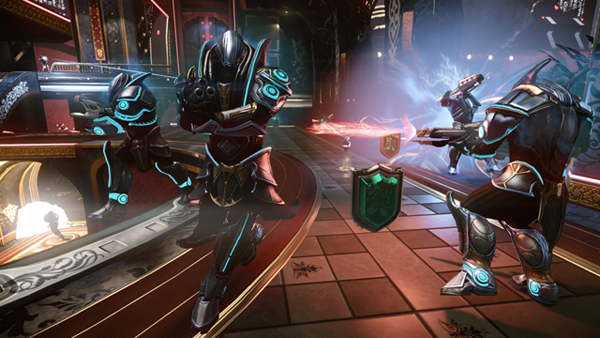 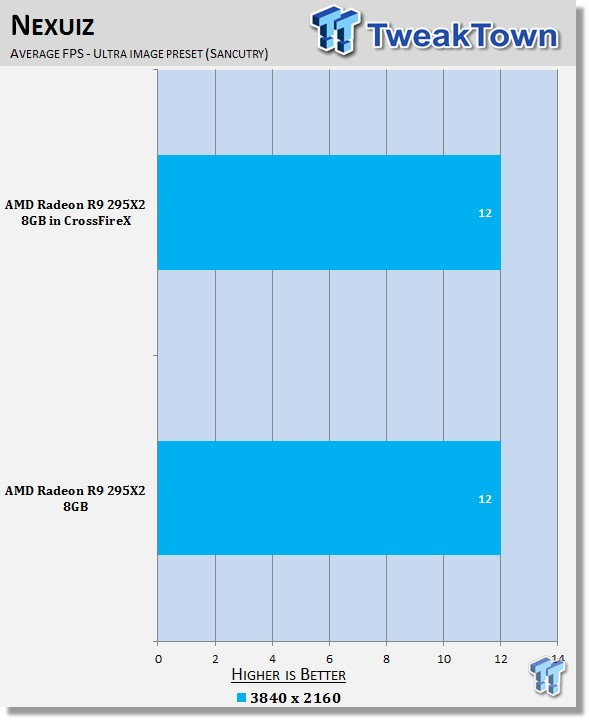 AMD and Nexuiz annoy me so much. Nexuiz is a game that AMD really promoted, and while from a gameplay point of view, it's nothing fantastic. From the perspective of being an intensive benchmark thanks to it being based on CryEngine 3, it is pretty good.

Unfortunately, as soon as you make use of CrossFire, the game just crumbles. Looking above, you can see both setups score a miserable 12 FPS, a number that is lower than a single R9 290X 4GB. 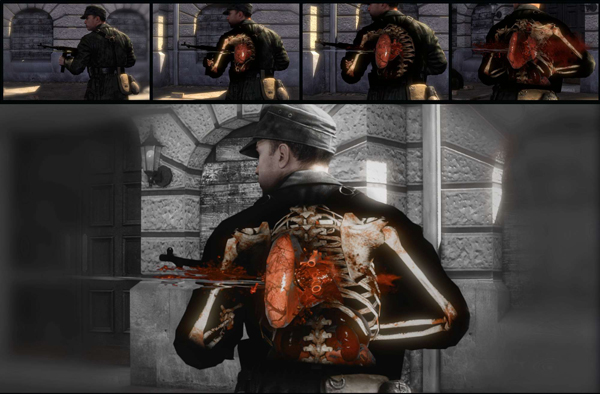 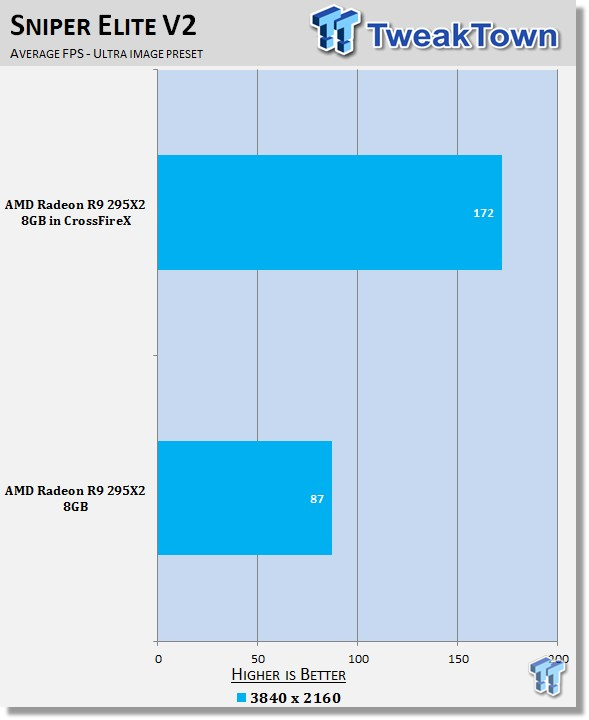 Sniper Elite V2 performance is pretty much doubled, and you can see massive performance under both setups. When running the four GPUs, though, you can again see we're nearing 200 FPS at this ultra-high resolution. 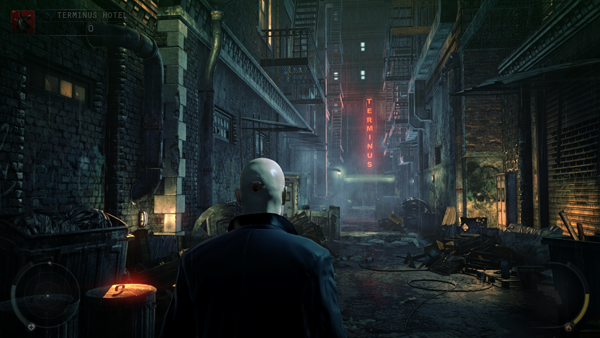 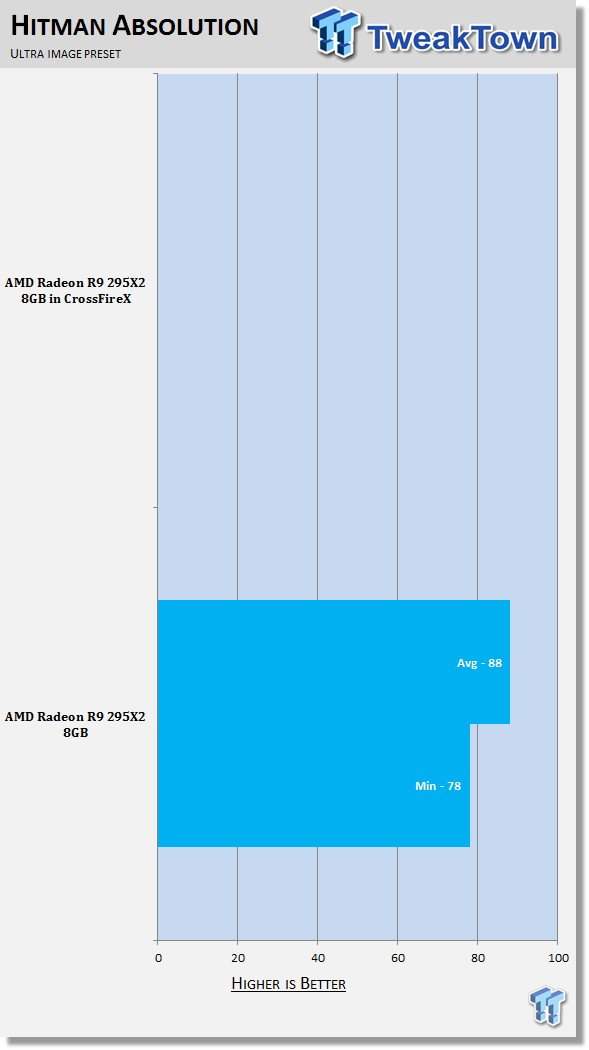 You can see a single R9 295X2 8GB has no problems running Hitman Absolution at this 4K resolution. When we threw the second card into the mix, we just couldn't get the benchmark to run. It would either freeze up or crash out before it loaded. 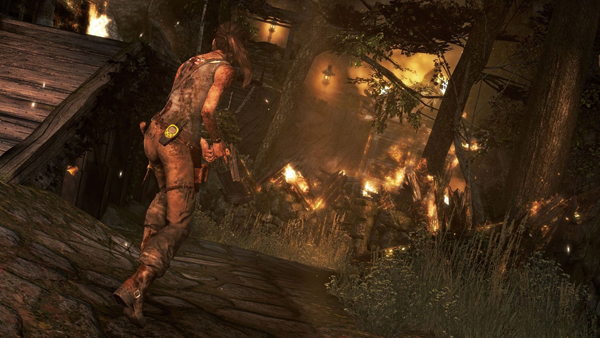 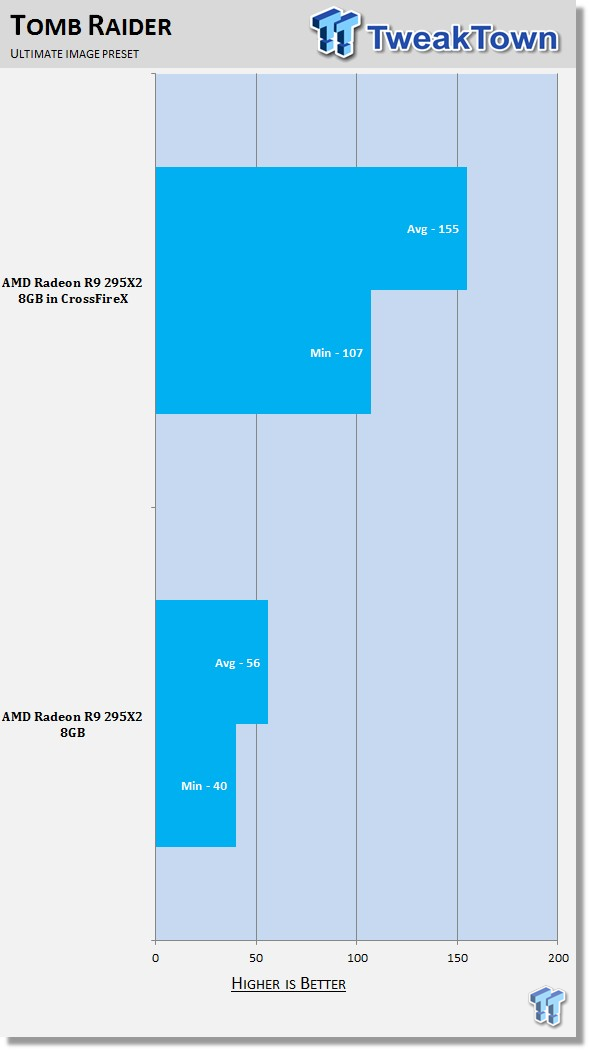 Tomb Raider performance is really interesting. With a single card, we would put the game at just playable. The average falls short, but thanks to the strong 40 FPS minimum, we would give it a passing grade.

Adding the second card into the mix, though, almost triples the performance to extremely playable. The results continued to be consistent no matter how many times we ran the benchmark. 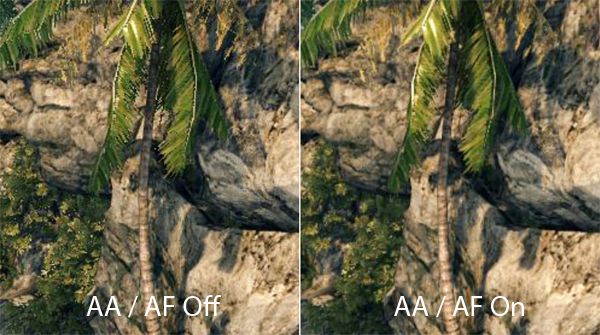 Here we see video cards go from playable FPS to unplayable FPS and the real power houses continue to help break that 60 FPS mark we always aim for to provide a smooth gaming experience. 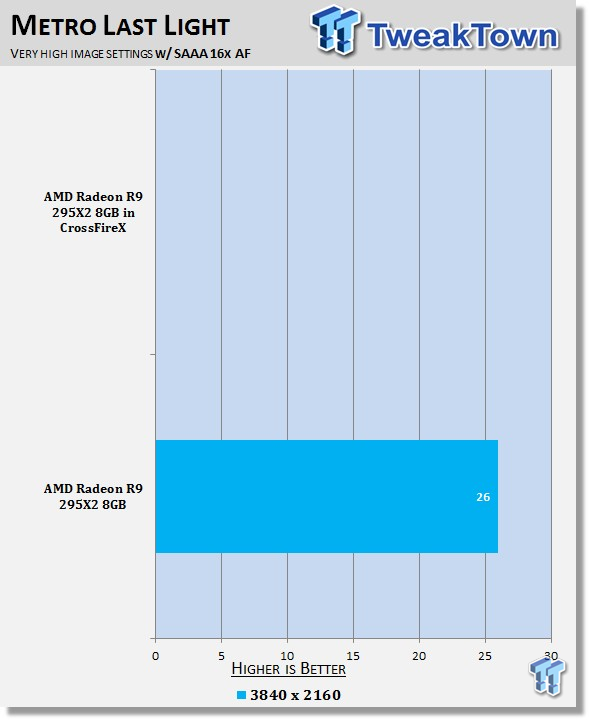 Not only does the single card solution not give us the FPS we need for the game to be playable, but we also see the CrossFireX setup fail to run the benchmark. 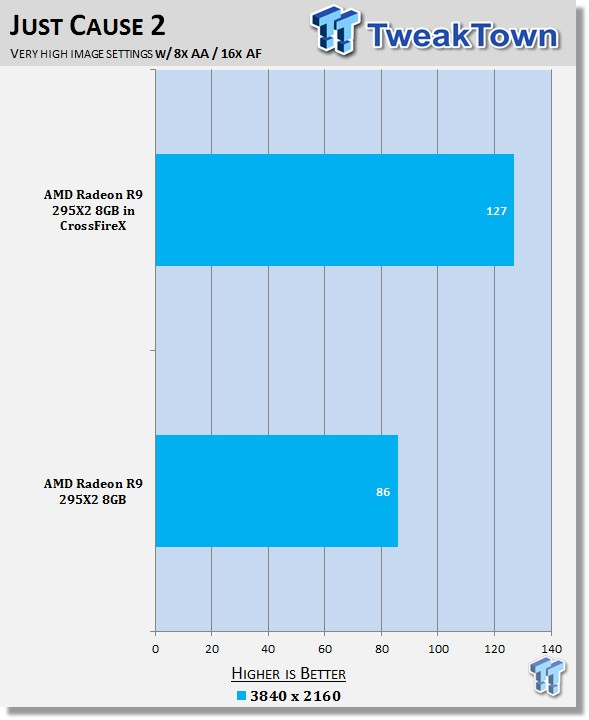 Under Just Cause 2, you can see that both setups had no issues offering us playable FPS at this resolution. You also can see a strong gain. If only this gain was consistent across our whole benchmark line up!

CrossFireX in a big way continues to not be a perfect technology, so much so that I don't think I could really bring myself to recommend someone spend $3,000 or more on a setup like this. When it comes to the single card solution, I continue to be a big fan of the model. Sure, it's expensive, but it's fast as hell, looks great, and is just the subject of so many geeks' wet dreams.

The worst thing is that when we see the configuration work perfectly, it's when it's not needed. Under games like Lost Planet 2, Just Cause 2, and Dirt Showdown, we see fantastic gains over the single card setups. The problem is the single card setups are when the game offers perfectly playable FPS. We don't need the extra FPS that is offered when the second card is installed.

While we thought the issues may be related to the 4K resolution, trying to benchmark Hitman Absolution alongside some other benchmarks resulted in the same failure being seen. It really is quite unfortunate that these kind of issues continue to plague us. We would love to see games like Hitman, Sleeping Dogs, Nexuiz, and others make use of the power that this video card setup offers.

If you're in the market for a high-end setup, then a single R9 295X2 8GB continues to be an attractive option. Two single R9 290Xs, though, with their combined price of under $1,200, does continue to look better to most people. We're looking forward to making more use of our 4K monitor in the coming weeks, months, and years, hopefully with more success then we saw today.

PRICING: You can find the R9 295X2 8GB for sale below. The prices listed are valid at the time of writing but can change at any time. Click the link to see the very latest pricing for the best deal.