With high-speed storage products, mainly SATA and SAS 6Gbps SSDs pushing storage performance, the previous generation RAID controllers and HBAs were already saturating the available bandwidth provided by the PCIe 2.0 bus. The new PCIe 3.0 products will increase the available bandwidth and move LSI one-step closer to SAS 12Gbps products coming in the next year or two. In our own testing geared towards enthusiast and power users, we were able to reach peak PCIe 2.0 performance with low cost, consumer SSDs.

The ten new product SKUs also include some new packaging options for LSI. Products are available with advanced kits that include FastPath, CacheCade 2.0 and more accessories bundled. These new bundle packages make it easier for customers to order all-inclusive packages and not needing to piece together components to make a total solution. The new bundles also decrease total cost for those who want to enable every option available on their RAID controller.

Today were going to skim the surface of the new LSI product line up that moves RAID and HBA storage cards from LSI to PCIe 3.0. Let's get right in and see the new offerings.

Today were going to start out with the new HBA adapters since they are shipping to distributers, e-tailers and retailers now. 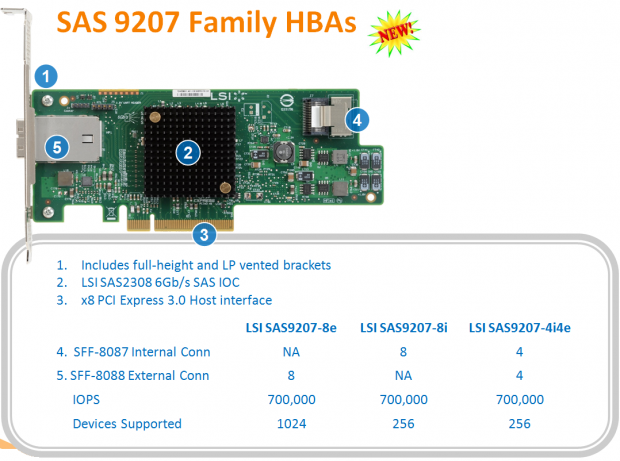 All three of the new HBA products increase IOPS performance to 700,000. This is an incredible amount of performance and allows LSI to retain their leadership role in the industry.

The three HBA cards then turn into five product SKUs. Both the -8i and -4i4e are available in both SGL packaging (card, documentation and software disk) and full kit form (with SGL + HBA cable kit). The -8e full external model does not get the kit treatment because it would be impossible to determine the length of cables needed.

MSRP pricing is located on this chart at the far right. The HBA models are available today and as always, the MSRP prices are the starting point since we have this wonderful internet thing. 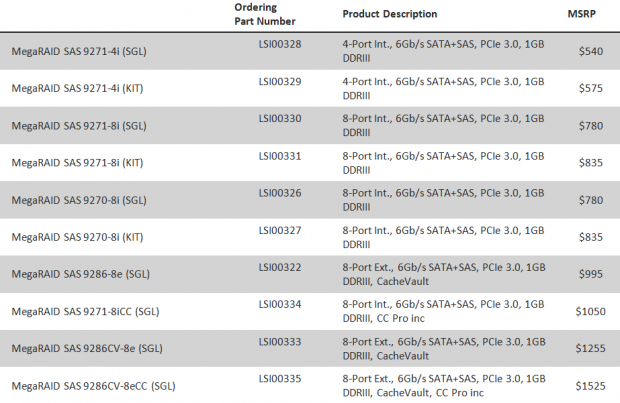 On the RAID controller front LSI released ten new product SKUs, but these products won't hit distributers until Q3 2012. The same naming system is in place with the RAID products, -8i means 8 internal ports, -8e means 8 external ports. There are SGL models and full kit models as well. New to this group are the CC products that include CacheCade Pro.

Let's take a look at the new models. 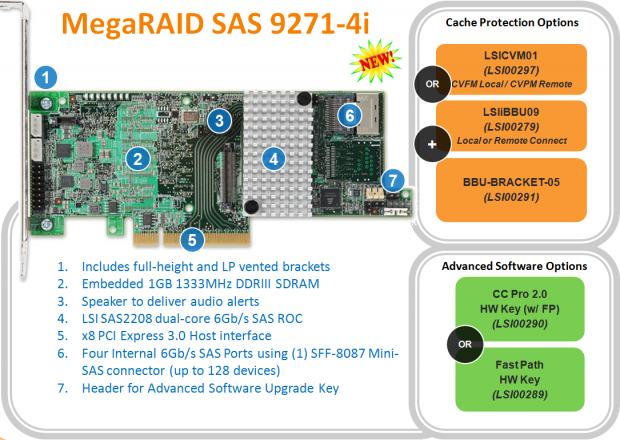 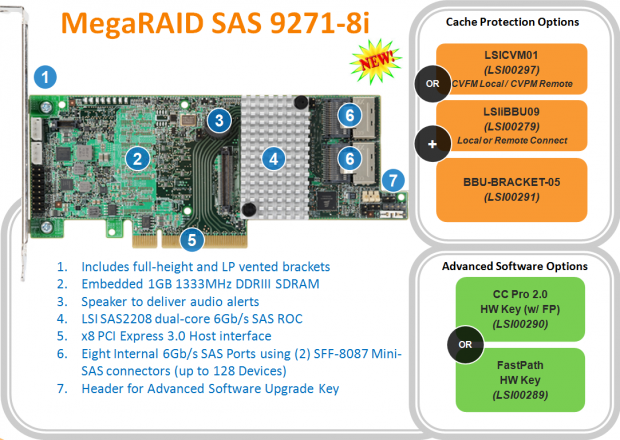 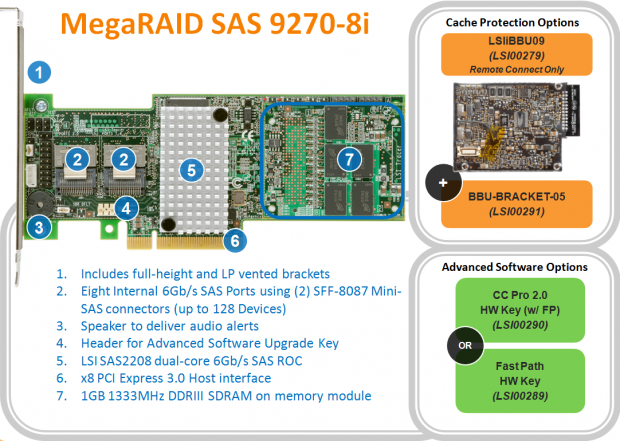 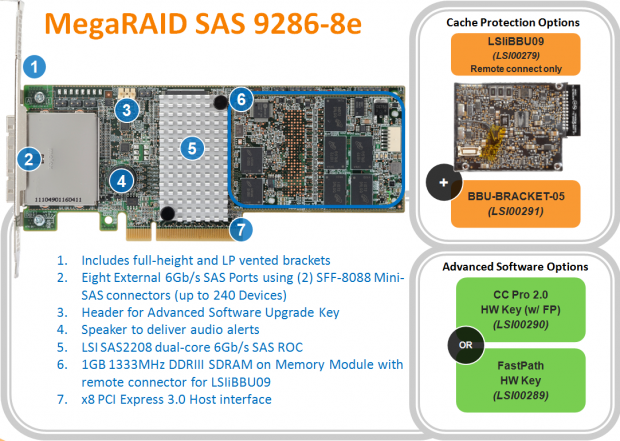 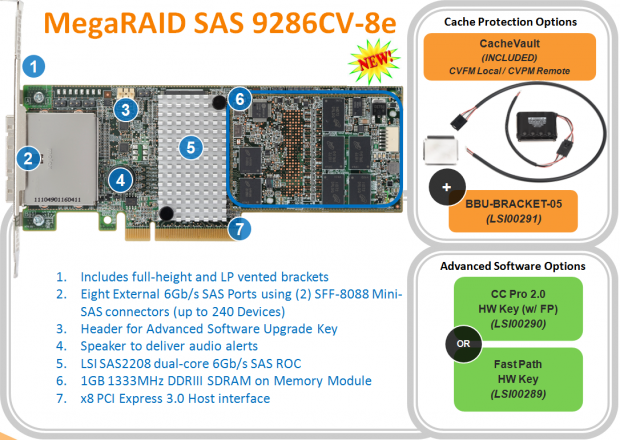 LSI has given users a plethora of options and allows you to target the exact number of features you need.

CacheVault is an accessory kit for the 9271-4i and -8i. The system uses NAND flash to retain the data in the DRAM buffer. A capacitor provides enough power to move the data from DRAM to NAND flash. 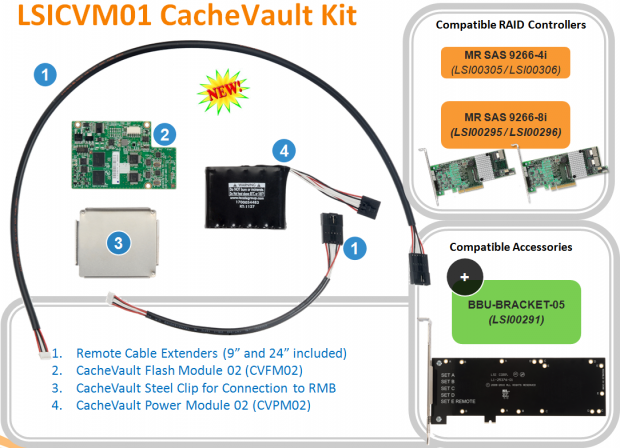 We find the CacheVault kit impressive and see it as a much better option than the ages old BBU strategy.

LSI has more information about CacheVault in this video above.

Preparing for the Future 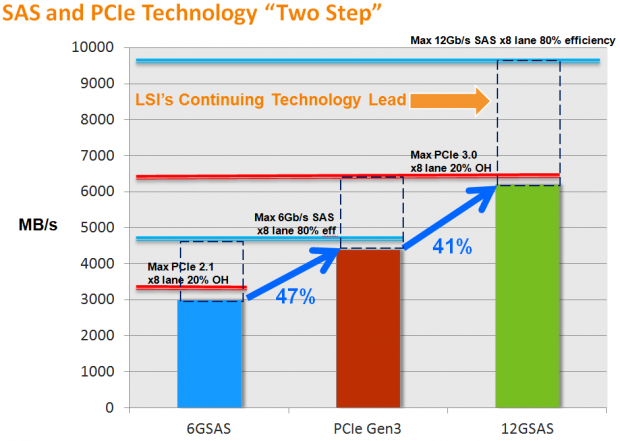 LSI is employing their version of Intel's Tick " Tock strategy. The first move is the leap to PCI Express 3.0 and then later the move to SAS 12Gbps.

In the chart you will notice that LSI also calculated overhead associated with both PCIe and SAS. 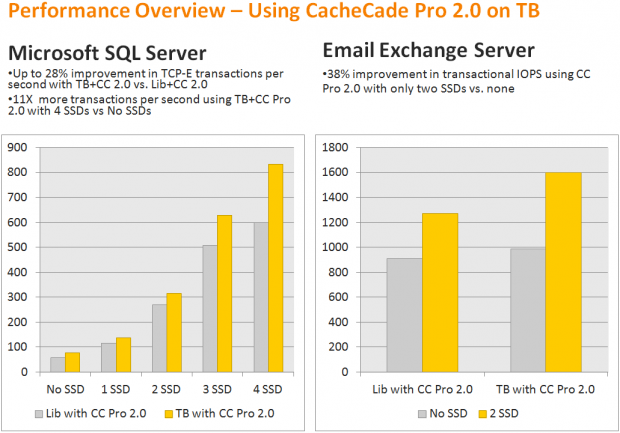 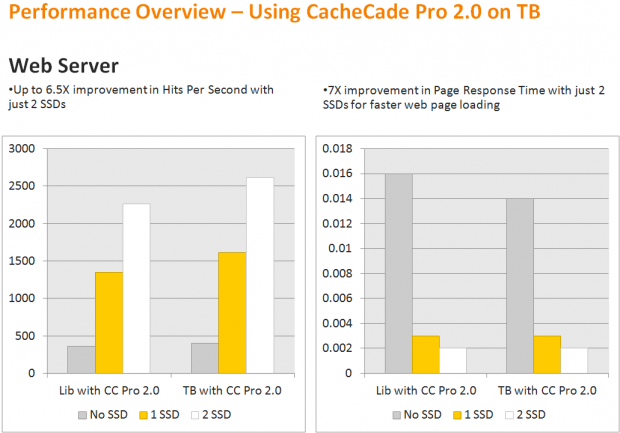 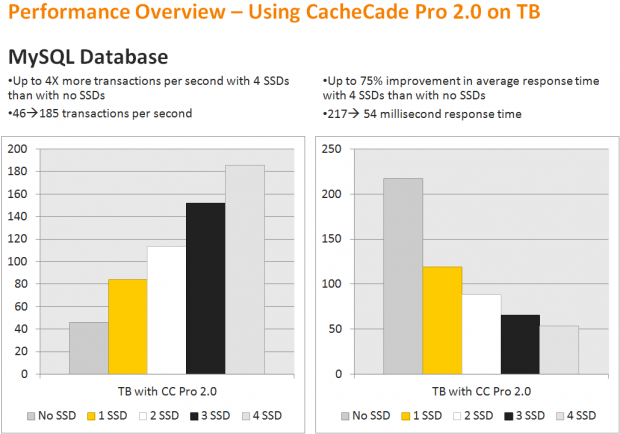 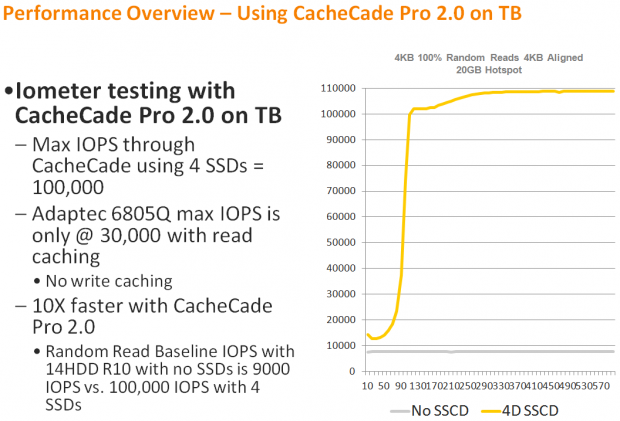 LSI provided us with some general performance data for their new PCIe 3.0 product line up.

The move to PCI Express 3.0 is an evolution for LSI that will provide a much-needed boost in transfer performance.

When we last tested the 9265-8i with FastPath we achieved read performance in excess of 3GB/s with eight consumer Crucial C300 256GB SSDs. Given the results we achieved it was clear that RAID controller technology was ready for PCIe 3.0.

Motherboard manufactures, server OEMs and the market have adapted PCIe 3.0 whole-heartedly. The interface and bandwidth that it provides are already deployed in new systems. Going forward, PCIe 3.0 will enable storage professionals to reduce the number of servers deployed to achieve their performance goals.

We're looking forward to testing LSI's new entries to the market. In the coming days Paul will conclude his first look at a new LSI HBA with PCIe 3.0 and in the fall test a new RAID controller. TweakTown isn't abandoning the enthusiast / power user RAID controller articles. I'll have a run with the new 9271-8i around the same time TweakTown is shipping out to sunny California for LSI's AIS event.