When the original Vertex and Agility product lines were introduced, we were told that the Vertex had a specific BOM (Build of Materials) list and the Agility had a dynamic BOM. In the end we found the first Vertex to have one set of flash that never changed, but the Agility shipped with three or more different flash configurations. The Agility was sold at a lower price because it used whatever flash was the lowest priced at the time of manufacture. While all who purchased an Agility were rolling the dice as far as what flash was included, some ended up with a drive that was identical to the higher priced Vertex.

When Vertex 2 and Agility 2 hit the market things changed again; Vertex 2 shipped with a higher IOPS programming and Agility 2 was shipped with the lower programming. For the most part this was an acceptable situation, but the BOM was never nailed down for Vertex 2. Eventually OCZ started playing loose and fast with the second series of these SSD products and somewhere along the line in December 2010 Vertex 2 drives started shipping with 25nm flash.

The move to 25nm meant OCZ could build drives with half the physical flash chips installed, thus making drives slower and since SandForce controllers consume an entire flash module for background tasks, end user capacity suffered as well. For most, it was the capacity shrinkage that hurt the most, especially for users purchasing smaller capacity drives.

You would think that OCZ learned from the BOM change fiasco with Vertex 2, but we have just found an issue with Vertex 3 and for notebook users the problem affects a lot more than user capacity and slower performance....you might not be able to use the Vertex 3 at all.

We've heard back today from OCZ Technology about the Lenovo Notebook / Vertex 3 issue.

A new housing is in place and will be shipping soon. At this time we don't have an ETA, but when one becomes available we'll update this article further. Anyone having the issue with their Lenovo or other notebook will be able to send their drive back to OCZ in exchange for a drive with the updated casing that will allow the drive to fit. 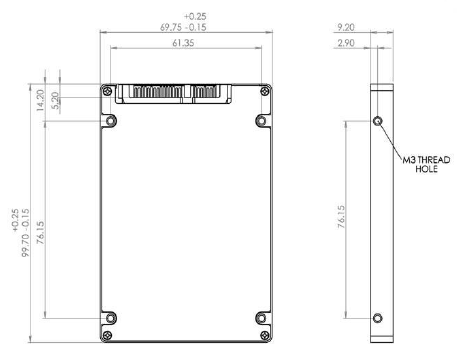 The above image was taken from OCZ's own Vertex 3 Product Sheet PDF that you can find here. The physical size mimics what I have on file in a document that lists 'official' sizes for the 2.5" form factor. Both documents state that a 2.5" form factor drive should be 69.75mm wide. 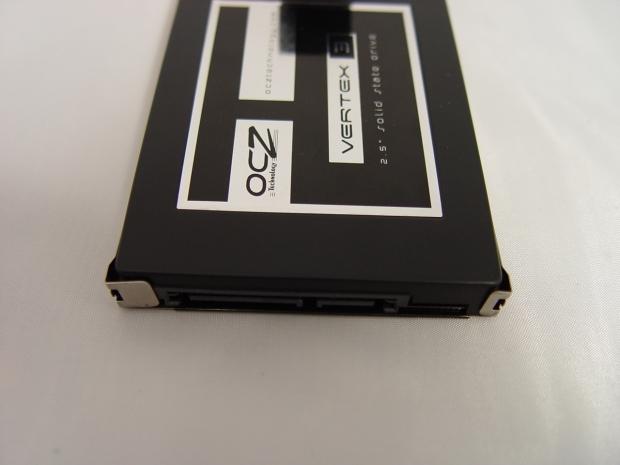 While installing a new, retail OCZ Vertex 3 240GB drive in my Lenovo notebook today, I found that the drive wouldn't fit into the drive carrier that is used to install 2.5" form factor drives. As you can see above, the data connector end is larger than it should be. At first I just thought this was an issue exclusive to the drive I had on hand, but I also found the Vertex 3 Max IOPS 240GB drive has the same issue (review coming soon). 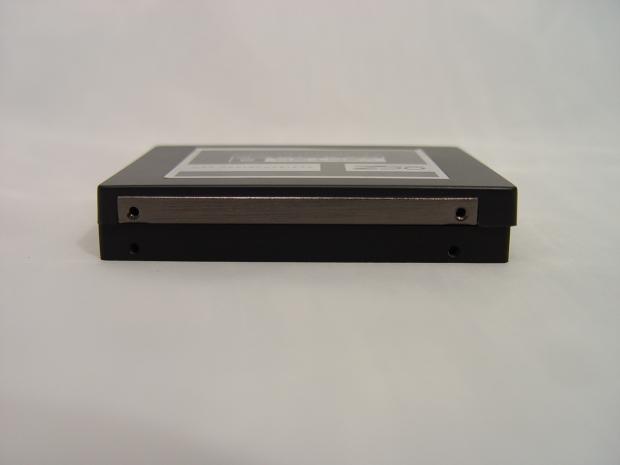 At that point I moved toward the Vertex 3 120GB drive that I tested last month and noticed that it used a different case to house the drive. Here we see the 120GB (bottom) and the 240GB (top) stacked on top of each other. At this point the picture became very clear, the new Vertex 3 cases are seriously out of spec. 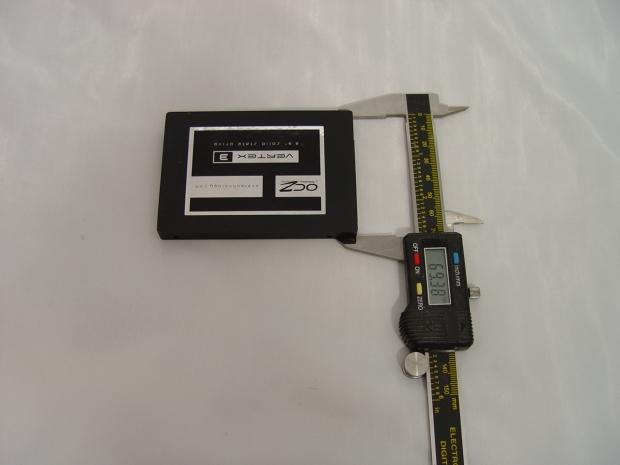 The above image contains the Vertex 3 120GB model I reviewed last month. This used the same case as the pre-production 240GB drive I reviewed a few weeks prior and the width of the drive measured about the same as every other SSD I have on hand. 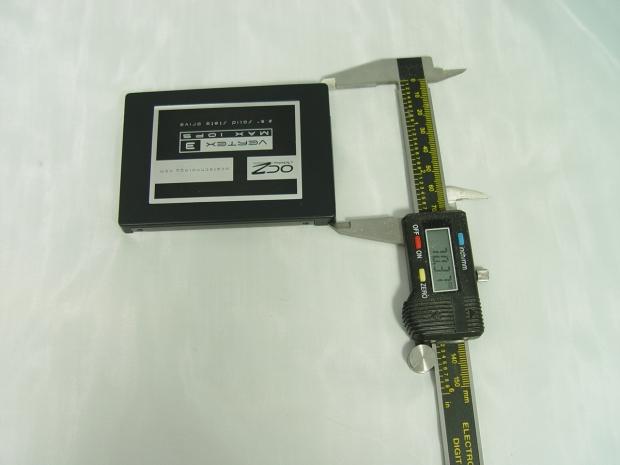 Next came the 240GB Vertex 3 and Vertex 3 Max IOPS, both with the new case with a plastic top cover. Here we see a 1mm difference in size. For most things in life 1mm isn't that big of a deal. Today we are talking about installing an OCZ Vertex 3 in a very common series of notebooks, so that makes it a big deal. For the last four or five years I've only owned Lenovo notebooks so I don't have anything else on hand to test with, but it's safe to say that some other manufacturers products are affected as well. 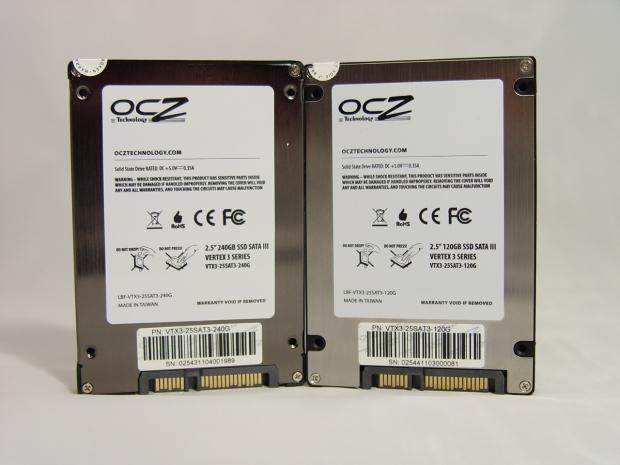 At this point you may be wondering how to tell the difference between the new and old case that houses the Vertex 3 before purchasing your drive. For that I have no answer. Here we see the 120GB next to the 240GB Vertex 3. It appears that OCZ has played with their BOM yet again and end users are going to suffer. Both drives have product numbers that start with VTX3-25SAT3-. The remaining designation only refers to the drives capacity.

Before I even decided to make this public service announcement, I reached out to OCZ and asked what would happen to the warranty if uses took a file to their new Vertex 3 drives to make them fit their notebooks. This was really a tongue in cheek question to see if my rep knew anything about the issue. After hearing her response I started a Google search to see if anyone else had a similar issue and found a thread at the Lenovo Forums. The Lenovo thread talks about a thread on the OCZ Forums; I found this thread on OCZ's own forum. At the time of writing OCZ isn't offering a remedy to the issue and the thread is only two pages long.

The easiest solution would be for OCZ to allow end users to take some sandpaper and sand off a section of the drive. At this time your warranty will be void if you damage the Vertex 3 (possibly Agility 3 and Solid 3) if you sand down your drive. Hopefully OCZ will allow end users to do a sandpaper mod on their drives since it would be a quick and painless fix for most.

Obviously I can't recommend anyone do this since their warranty would be void, but we'll keep on OCZ and see how they plan to fix the issue. I am confident that OCZ will remedy the form factor issue in one form of another. This comes at a bad time though with other manufacturers rolling out SF-2281 products. The Vertex 3 still has my recommendation for the high performance SSD category, but notebook users will need to take some measurements before going down that path.

Look for updates on the OCZ Forums and I'll do my best to update this article when more information rolls in.

We've heard back today from OCZ Technology about the Lenovo Notebook / Vertex 3 issue.

A new housing is in place and will be shipping soon. At this time we don't have an ETA, but when one becomes available we'll update this article further. Anyone having the issue with their Lenovo or other notebook will be able to send their drive back to OCZ in exchange for a drive with the updated casing that will allow the drive to fit.