Back in February, I took a semi-informed, speculative guess at the contents of the forthcoming Star Wars Saga Blu-ray. With an additional press release sent to media last week (despite LucasFilm's promise that "all will be revealed"), there are still quite a few gaps in our collective knowledge. So I thought it would be best to update you all on what we will definitely see and are likely to see in the Star Wars saga boxset, when it goes to market on September 12th in the UK, the 14th in Australia and the 16th in the US. 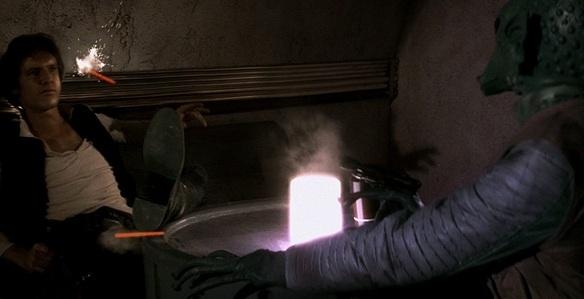 It has been confirmed that the Yoda puppet from all scenes in The Phantom Menace has been replaced with the CG model that was produced for Attack of the Clones. Whilst not previously released in full, a snippet can be seen on 'The Chosen One' documentary from the Revenge of the Sith DVD (or find it on YouTube).

It is highly unlikely that any further deleted scenes will be inserted into the films proper, but it is expected that many scenes from all six films will be further tweaked. Think back to the enhancements created for the 'Special Edition' as an example. I expect that some of the computer graphics from The Phantom Menace and Attack of the Clones which have aged poorly, will be corrected or enhanced. This will likely extend to the special edition CG additions to the original trilogy too. As the first time that all six films have been released together, Lucas will want all the films to look more cohesive than ever.

I feel that at the age of what is now approaching 70 years old, Lucas will not make many changes to the films in coming years and I fully expect that these Blu-rays will become the definitive version of all the films. What's more, it has been confirmed that these versions will be the basis of the upcoming 3D theatrical releases starting in February 2012, further suggesting a sense of finality to the saga.

Film restoration firm Lowry Digital who restored the trilogy for the 2004 DVD release (also the basis for the 1080i transfers broadcast on HD TV channels in recent years), have allegedly performed more work for this set. Lowry worked at a bristling pace of just one month per film to restore each of the original trilogy films in 2004, which studio head John Lowry commented featured some of the worst film degradation that he had seen.

A New Hope, for example, which was the worst of all, had maybe a million pieces of dirt in the first couple of reels of that movie. Unbelievable.

Due to the speed that Lowry had to work at to strike the 2004 transfers, a few errors were introduced in the process, such as inaccurate colours and errors in colour timing. However, I strongly suspect that Lowry has gone back and rescanned the film in higher resolution, as the corrections to the films for the 2004 DVD's were performed only at 1080p; hardly suitable for future use. This is lent further support by the confirmation that these versions will be the basis for the forthcoming theatrical 3D re-releases. These need to be produced at a resolution greater than 1080p.

It is an absolute certainty that a new transfer will be used for The Phantom Menace. The current DVD and HD TV broadcast transfers are an absolute mess which were originally created at sub-par quality, allegedly so as to not look out of place with the original trilogy, which at that point had not been treated by Lowry Digital. Filled with film artifacts, noise and excessive grain, along a horrendous amount of haloing edge enhancement, there is no way that transfer will be used.

Thus far, it's been confirmed that each of the films six discs will feature just the movie along with two audio commentaries, with the press releases promising a bitrate approaching the formats maximum capacity of 40 Mbps.

Multiple 5.1 mixes have been created for the original Star Was Trilogy over the years, each with minor differences in sound effects and in some instances, dialogue. Errors were introduced in the 2004 5.1 mixes, including issues with the soundtrack volume and flipped music channels which affected A New Hope. Due to vocal complaints, it is likely these will be rectified, hopefully without introducing other issues. It is now confirmed that each film will feature a DTS HD Master Audio track, with 6.1 channels. This suggests that no major work has been performed to the audio tracks, porting out the previous Dolby Digital 5.1 EX (flagged) track to a discreet DTS 6.1 mix. If true, this is somewhat disappointing.

It's curious that LucasFilm have dumped its long collaboration with Dolby Laboratories and embraced the Twentieth Century Fox policy of DTS encoding on its Blu-ray releases. Reading between the lines, this probably suggests that Fox is footing the bill to produce the release.

It's been rumoured for some years that Lucas would take the opportunity to add elements of soundtrack cues including 'The Imperial March' to A New Hope, but I suspect this will not eventuate. 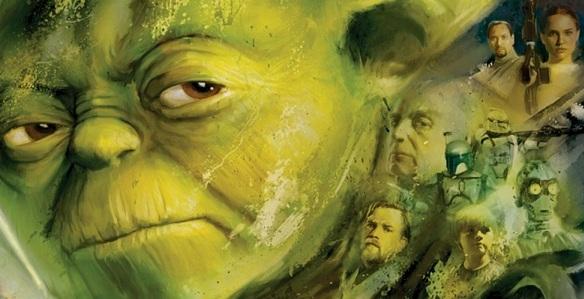 The LucasFilm press release distributed last week sheds more light on the collection of extra features the set will include.

The 9th bonus features disc exclusive to the Complete Saga release features a mix of vintage and newly produced content. The C-3P0 and R2-D2 hosted The Making of Star Wars documentary is a classic, with some good on set material, but also a nice insight into the cultural zeitgeist of 1977 which shows the emerging force of the movie, which was just turning into an empire. The Empire Strikes SPFX special is a Mark Hamill hosted, hour long feature on the complexities of filming in locations such as Norway and the logistics of the cutting edge model work. Classic Creatures: Return of the Jedi features an extensive look at the latex monster makeup for the final film.

Two other featurettes look at the CG recreation of the Dewbacks for the special edition release of A New Hope and the Star Wars Tech featurette produced for the 30th Anniversary takes a look at the technology of the Star Wars through the prism of the real world.

Three newly produced featurettes (which I've not seen) close off that disc. Star Warriors takes a look at the 501st Legion; a worldwide club for people who like to dress up as Star Wars characters. A Conversation with the Masters: The Empire Strikes Back 30 Years Later was produced for the 30th Anniversary of the first sequel, and is memorable for one of the last on-camera interviews with Director Irvin Kershner who died late last year. Star Wars Spoofs rounds up many Star Wars references from pop culture, including Family Guy, The Simpsons and even includes the music video to Weird Al Yankovic's 1999 song The Saga Begins.

The new press release makes mention of Deleted, extended and alternate scenes. While specifics have yet to be revealed, likely candidates will include the original opening of A New Hope with Luke and his friends on Tatooine, and a later catch-up with Luke and his friend Biggs, the original Cantina scene (filled with bargain basement monsters), Wampa scenes from The Empire Strikes Back and the sandstorm sequence from Return of the Jedi are all likely to appear. George Lucas publicly screened one scene which will be part of the set last year; Luke constructing his Lightsabre in a Tatooine cave from Return of the Jedi. The scene was never confirmed to have been filmed, showing the Star Wars juggernaut can still keep some secrets.

Dating previously to the DVD release, LucasFilm eagerly undertook digitisation of assets from the films, including original concept artwork, set designs and behind the scenes photography; works that can never be replaced. Whilst many of these have found their way to book releases including J.W. Rinzlers' epic tomes 'The Making of Star Wars' and 'The Making of the Empire Strikes Back', there is a lot that's still never been seen and I fully expect the LucasFilm archives to be mined once again for use in documentaries and photo galleries. It's now confirmed that extensive galleries will be included on the original trilogy extra features disc, which will likely include many of these assets. 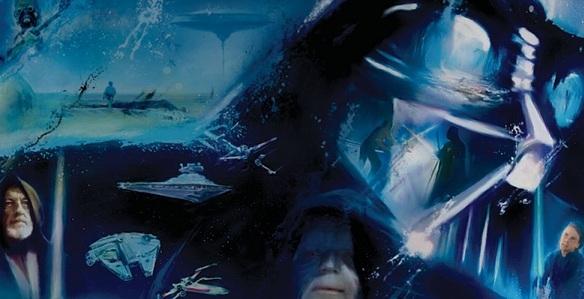 Whilst work on the Blu-ray has been ongoing at LucasFilm for some years (dating back to 2009), there is still some five months before the collection will see the light of day. The next opportunity for more specifics to be revealed about the Blu-ray will likely be the San Diego Comic Con at the end of July. Hopefully this will shed some additional light on any further changes to the films and more concrete details on the remaining two extra feature discs.

As always, Lucas knows how much to feed the fans so they are always wanting a little bit more.