We're still a good couple of days away before we can lift the curtain on the new Z68 chipset and with another one arriving we thought we'd give you a quick look at what's going on with the new chipset from MSI.

Unlike ASRock, MSI doesn't have any of the boards listed on its website, so where this sits amongst the others, how many they'll offer and all that kind of stuff, we're not 100% sure yet.

Knowing MSI, though, the Z68A-GD80 we're looking at today will no doubt be one of the higher end boards as it carries with it some pretty cool features. So let's get started and check out the bundle that MSI has got going on.

There's four main bits to the box of the MSI Z68A-GD80 and there's just an absolute bucket load of information on offer. The front gives us a bit of information, but the highlights are the "Military Class II" and "OC Genie II" features. The back then goes on to explain some of those features in more detail and tells us about a few other smaller ones on offer. 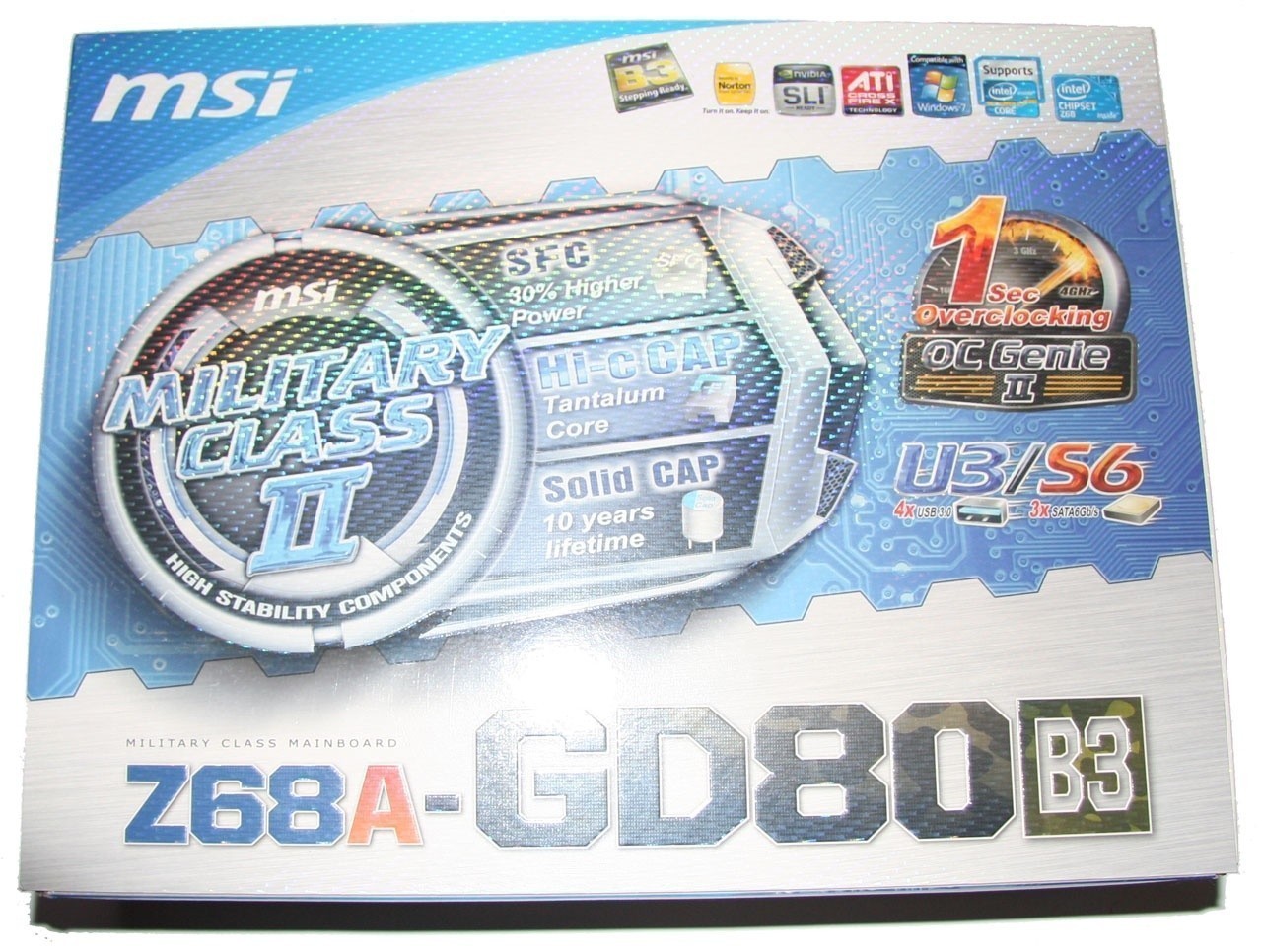 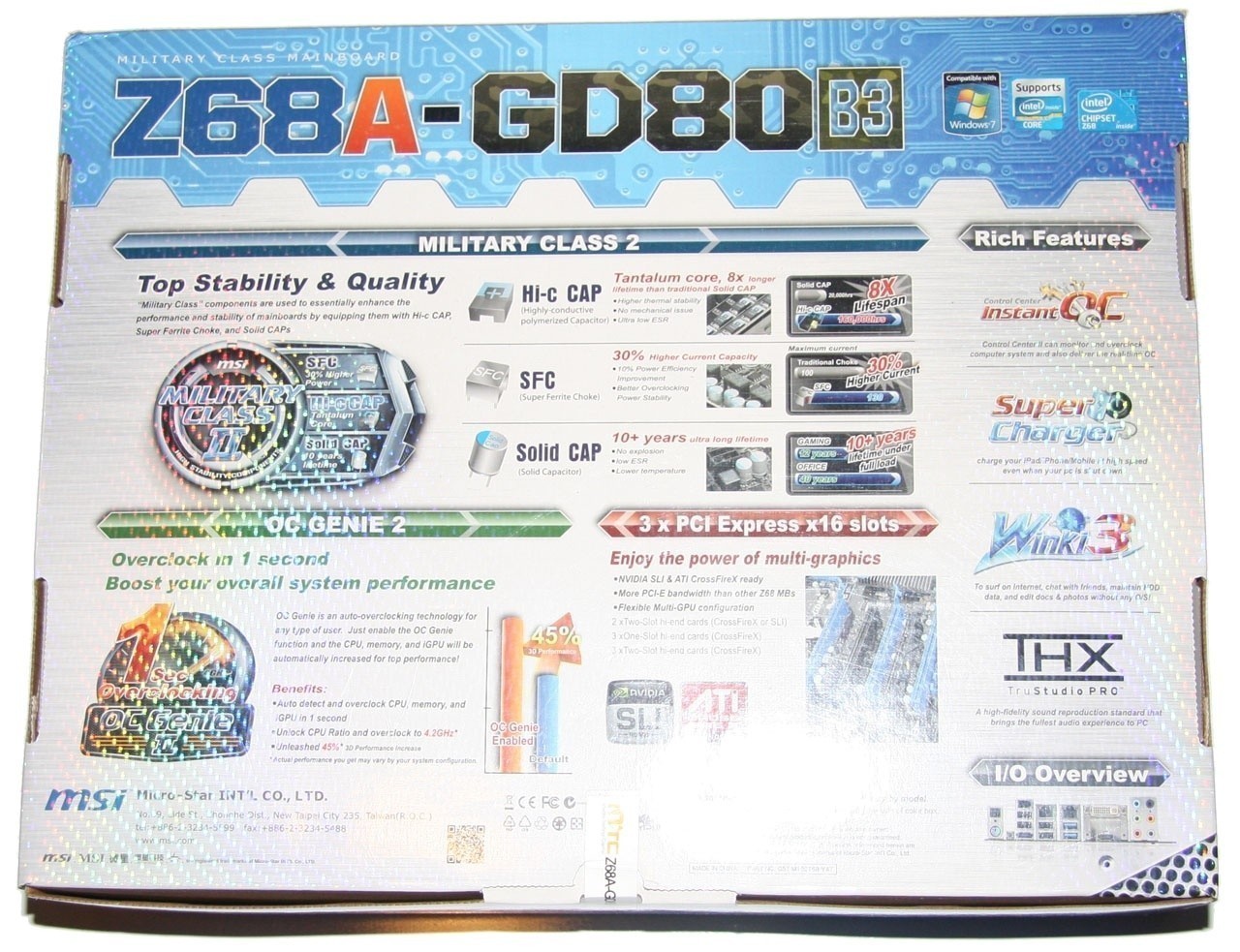 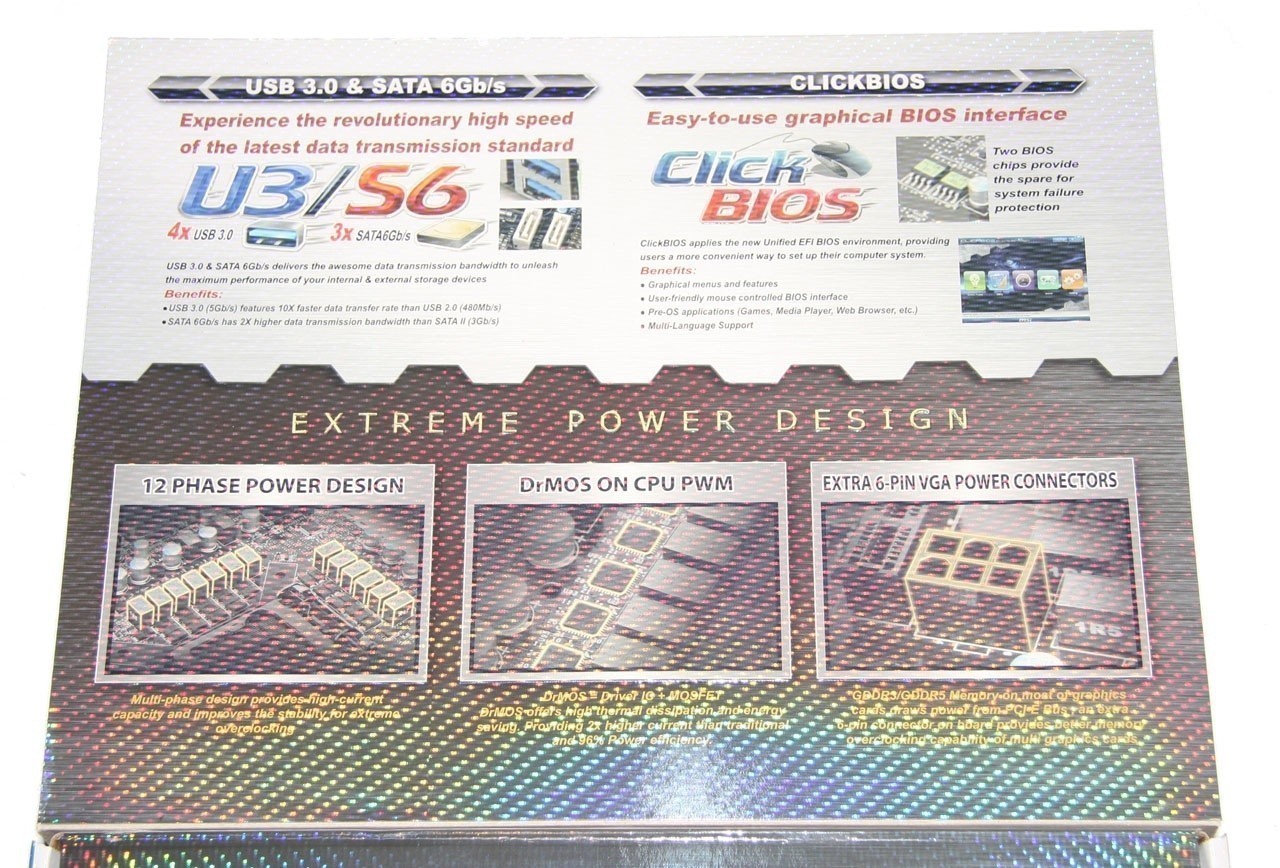 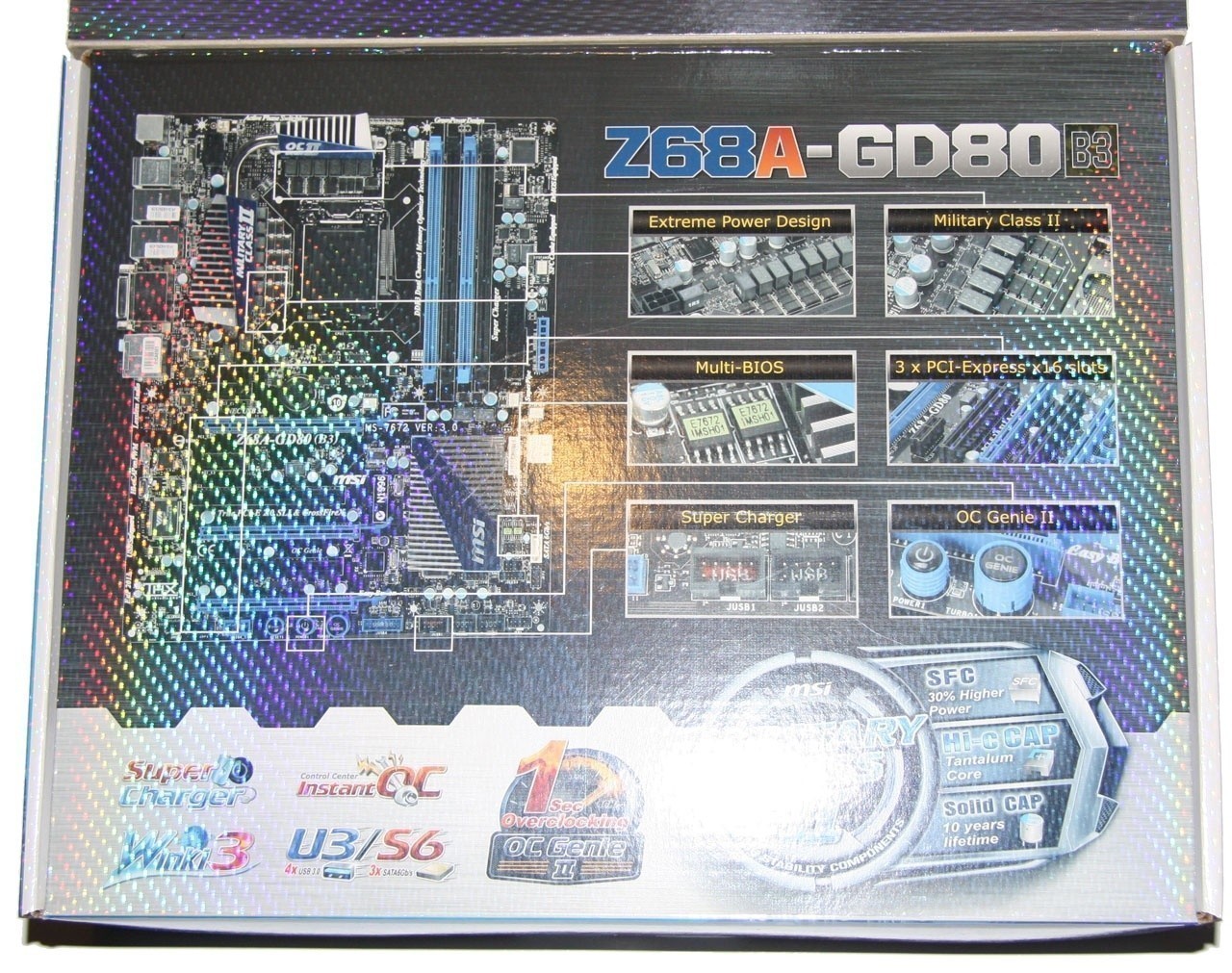 Moving back to the front, you're able to flip the box open and then see even more features on offer, while the bottom part of the box gives you a look at the motherboard and highlights some of the main features on the actual board.

It's just a really informative box, but more importantly it gets you excited about what's on offer from the board and what it's capable of. Unfortunately we won't be looking at the performance side of things today, but instead that will come after the NDA is lifted. 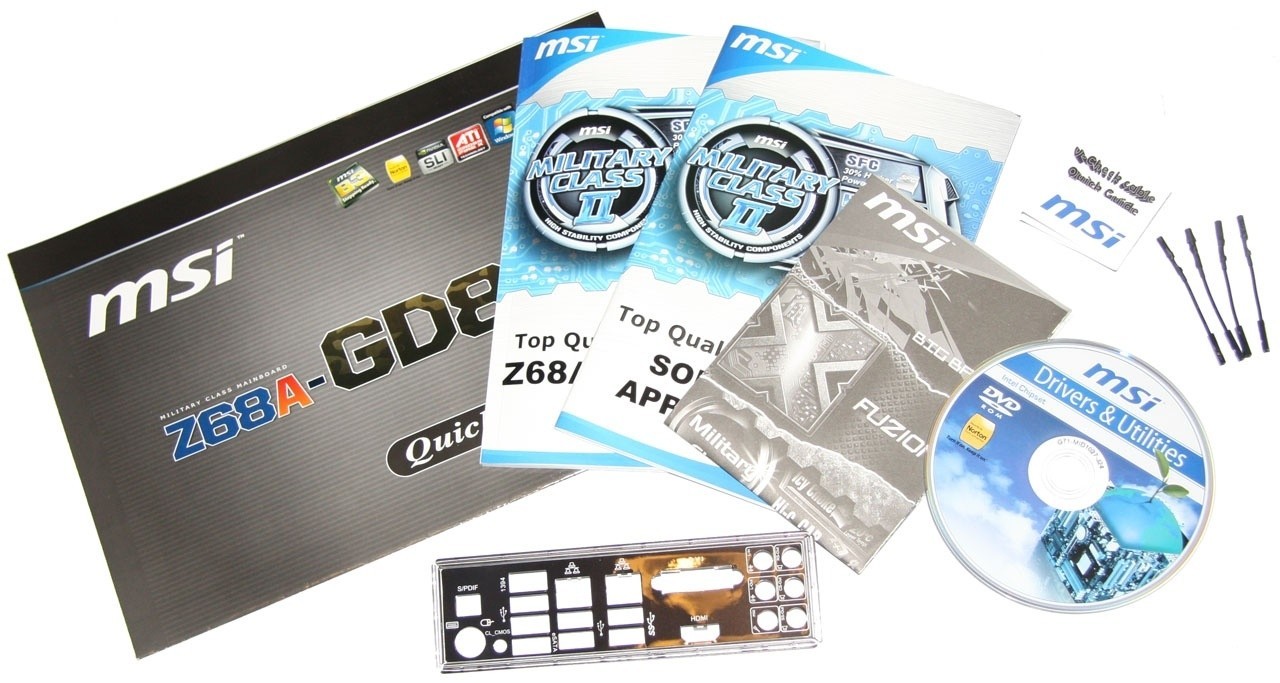 Inside we've got a bunch of paperwork related to the motherboard along with a Driver CD and I/O back plate. Also in the top right you'll see some little cables and another manual; this relates to a feature that gives you the ability to measure the voltage of certain points on the board. We'll talk about this more a little later. 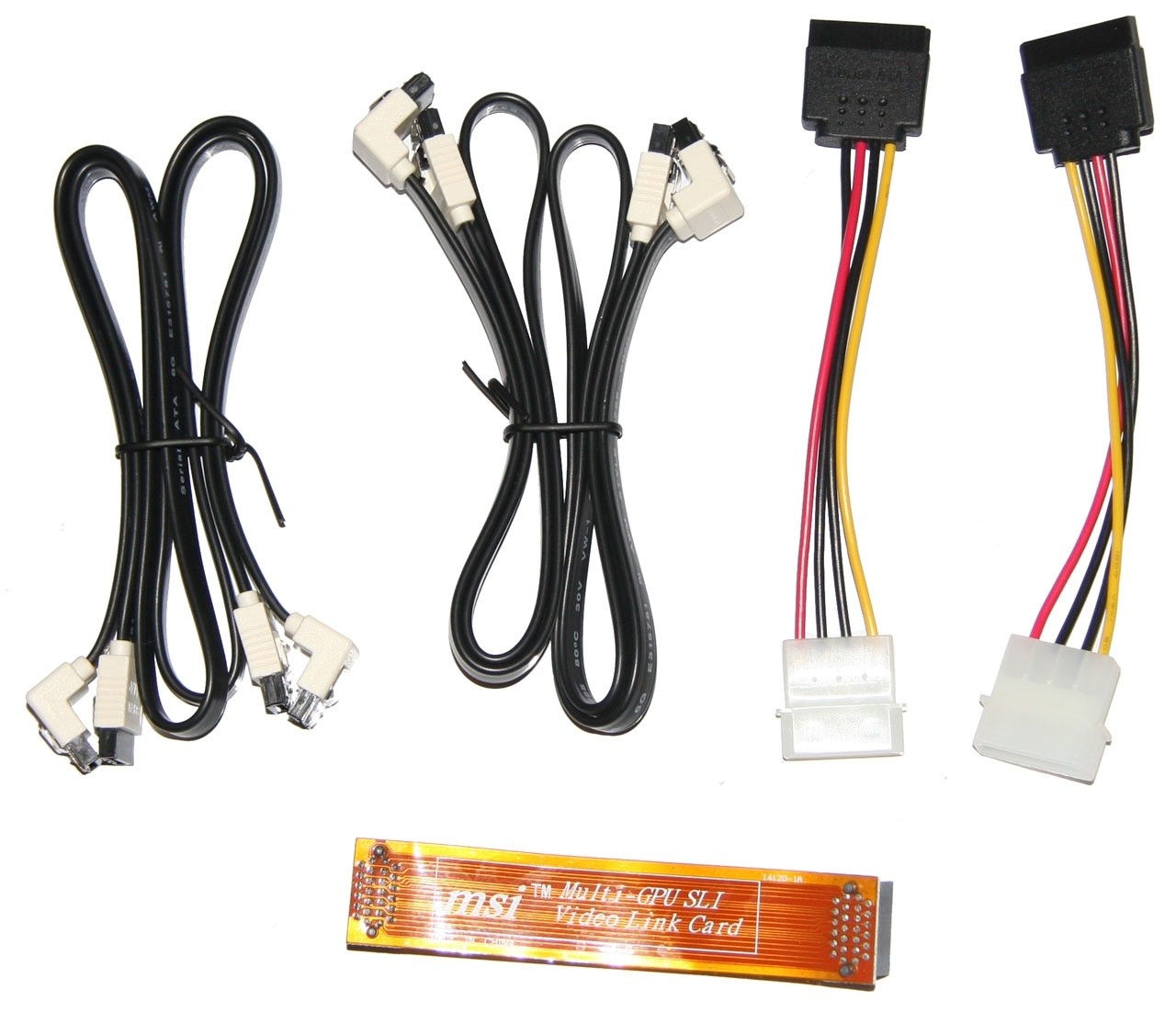 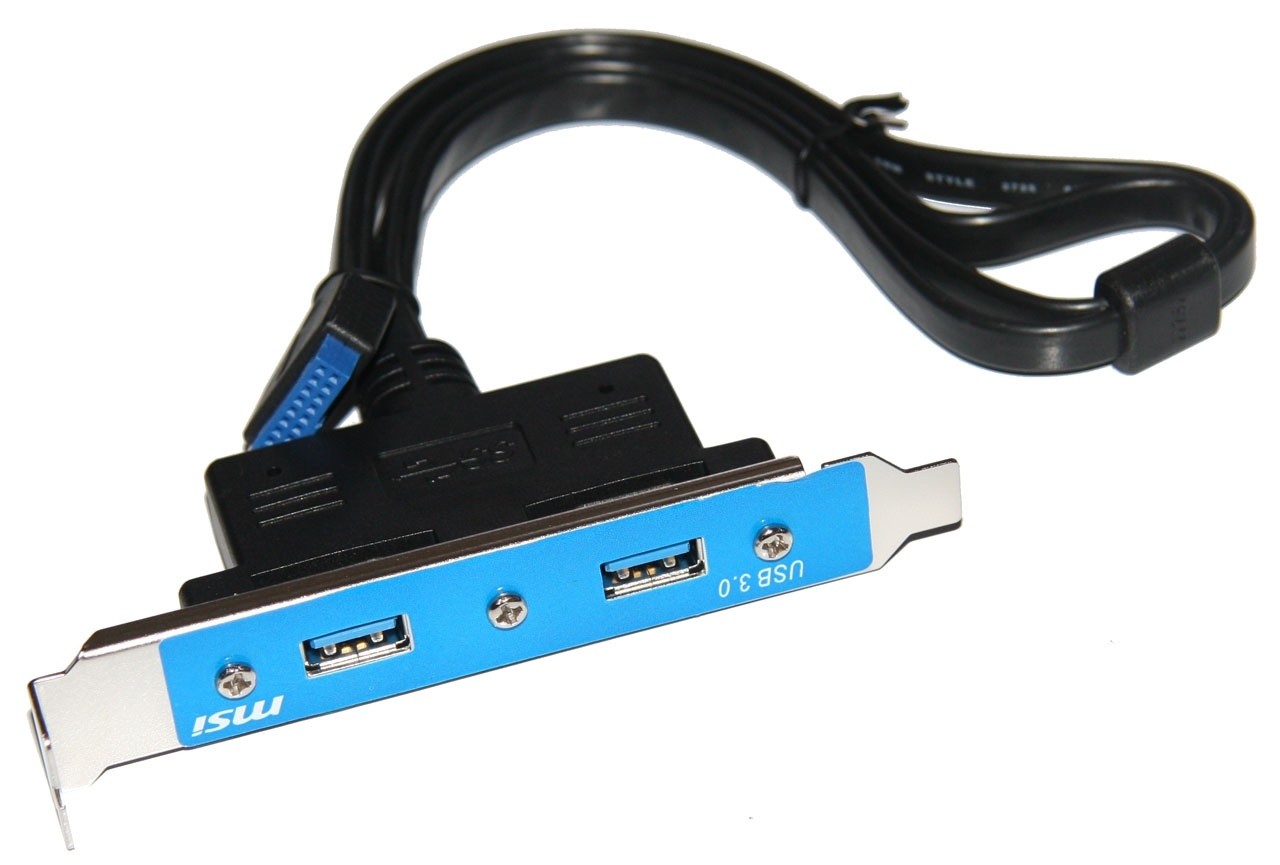 Rounding out the rest of the package, we've got eight SATA cables, two Molex to SATA, SLI bridge cable and a dual USB 3.0 header. All in all, we've got a very strong package going on that gives us a bunch of goodies that you'll no doubt be making good use of.

Pulling the Z68A-GD80 out of the box, we've got for the most part a black and blue setup going on. You can also see some of the main highlights and again we see the "Military Class II" labeling on the heatsink around the CPU area. 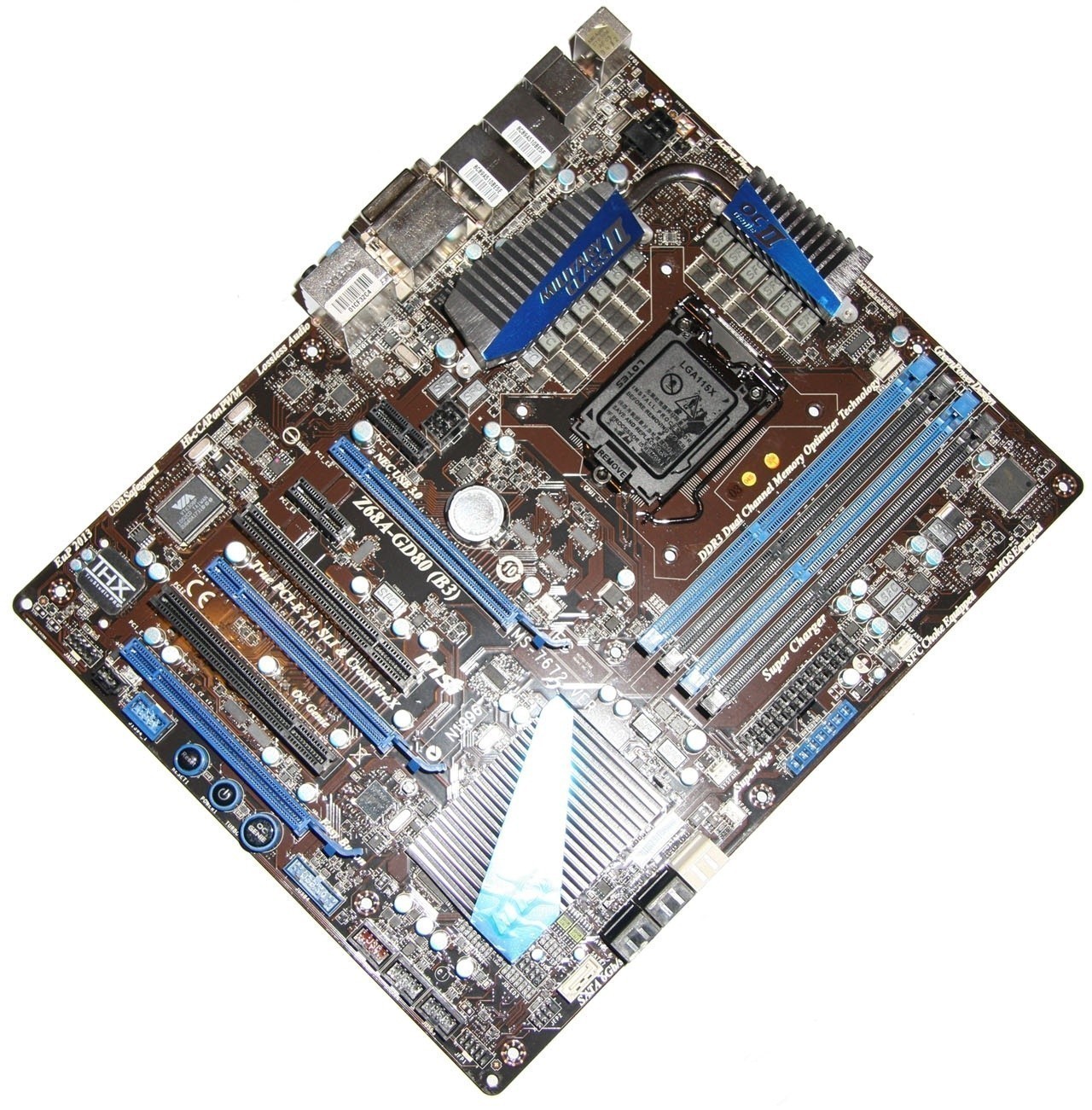 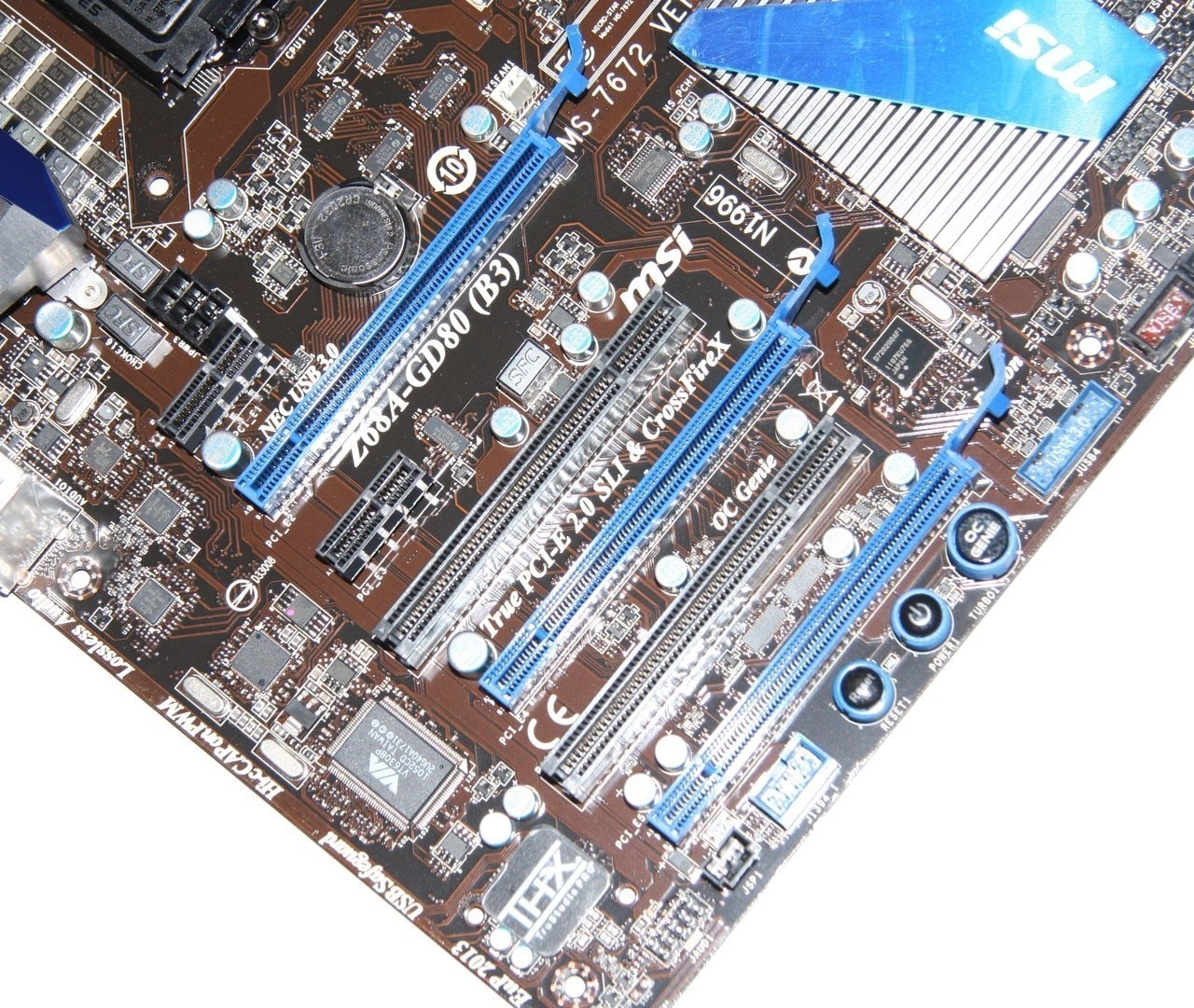 Getting a look at the motherboard, we can see quite a healthy setup when it comes to expansion ports. We've got two older PCI ports, two PCI-E 1x ports and three PCI-E 16x ports. Of course, being the Z68 chipset, when you install two video cards using the top two ports they will both run at only 8x. If you add a third card into the mix the third will run only at 4x.

What I like most about this setup, though, is that there's a two slot gap between the first PCI-E 16x and the second PCI-E 16x. While some might think there's nothing special about that, if you opt for a SLI or CrossFire setup your top card still has some room to breathe and draw in some cool air. 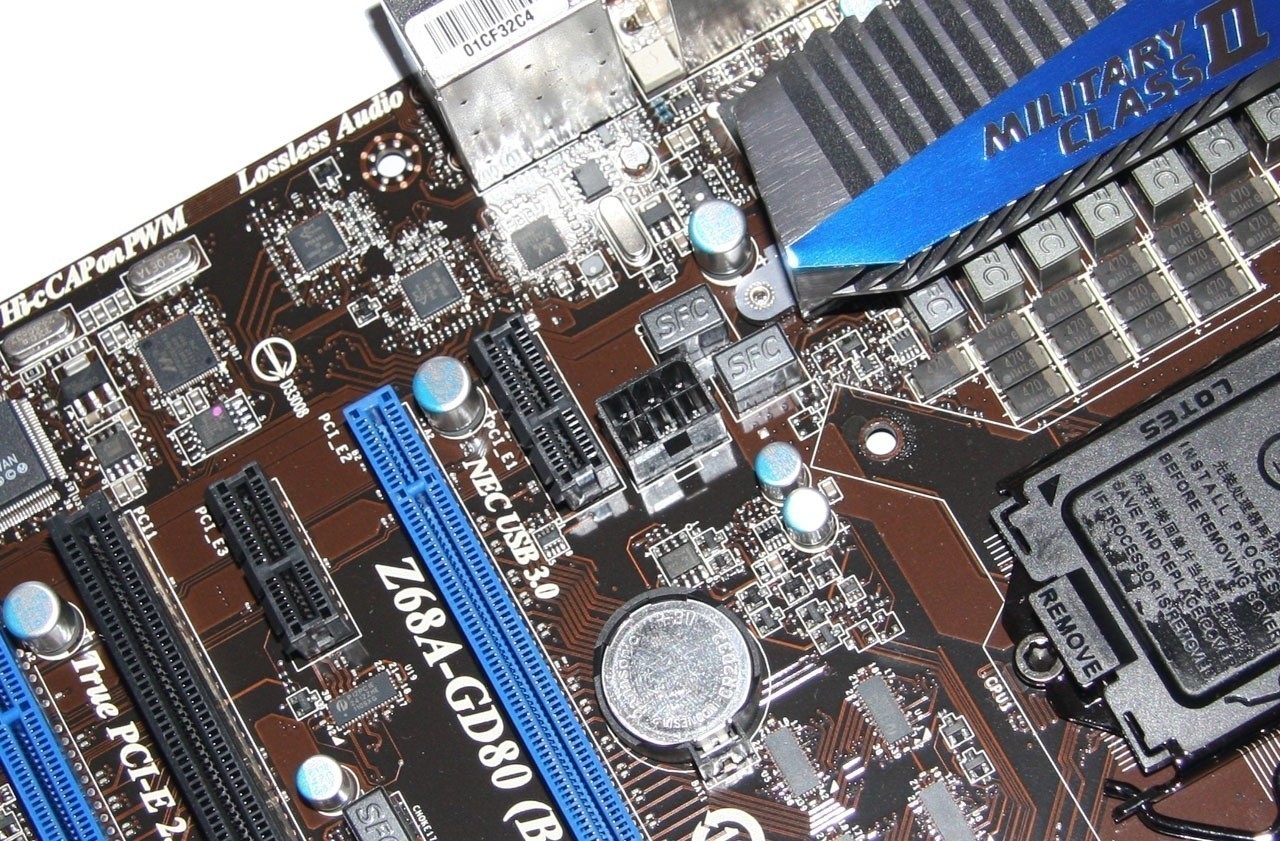 Above all the expansion slots we have a 6-Pin PCI-E power connector. MSI say this is designed to make sure power to the video cards is extra stable, which in turn can help offer a higher overclock. It's something we're seeing on more and more motherboards when it comes to higher end designs. With good quality mid-range and upward PSUs having so many connectors, moving one onto the motherboard to make sure your VGA power is constant and stable shouldn't be a problem.

Moving away from the slots and checking out the bottom of the board, we can see from the left a HD Audio and 1394 FireWire header. Next to that we've got three buttons; reset, power and "OC Genie". The first two will make sense, but the third may not. We'll discuss what "OC Genie" is capable of later, but won't show you until after the NDA.

Continuing to move across, we've got four USB headers; the first one which is blue is USB 3.0 while the next three are USB 2.0. Next to and slightly above them we have "JFP" headers which are for the front panel controls on your case; buttons like power and reset and LEDs for power and HDD activity.

Turning the corner, we can see the "JFP2" header a little clearer while on the other side we can see two fan headers. In-between these connections we have a total of seven SATA ports. The six together are all controlled by the Intel Z68 chipset; the black are SATA2 while the white are SATA3. The third white SATA port that sits by itself is controlled by the Marvell 88SE9128 controller and is of course SATA3 as well. 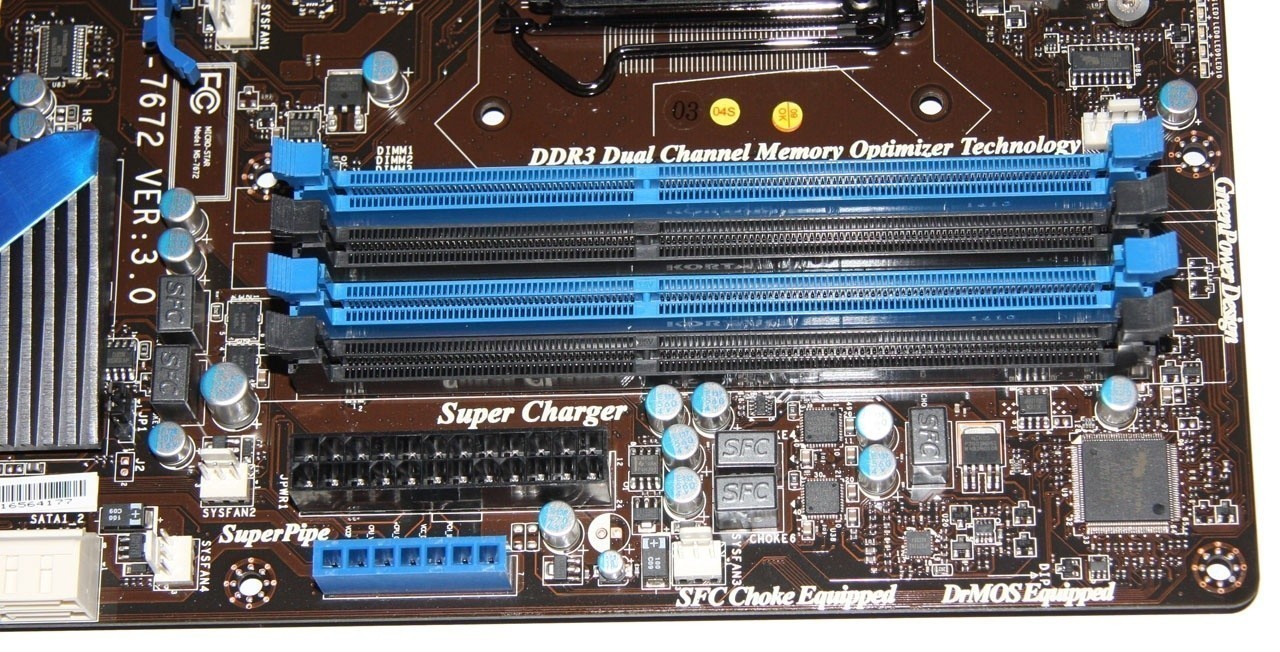 Moving away from the RAM slots and just below our 24-Pin ATX power connector, you can see something else that stands out. The "FV1" or Voltage Check Point header does exactly that; gives you the ability to check the voltage of certain areas. From the left we have the ability to measure CPU, CPU CTT, Onboard Intel Graphics, DDR and PCH voltage, with the final two being ground points.

Much like the Lightning and HAWK series of video cards from MSI, this is something that a lot of people will probably find themselves not using. In saying that, if you wanted to get an extremely accurate measure on the voltage of your CPU when benchmarking, it's extremely handy. If you know your CPU is going to be fine at 1.5v and you've set it to 1.5v in the BIOS, but when benchmarking you can see on your voltage meter it droops to 1.48v, you could go back into the BIOS and up the voltage to 1.52v and then see when in use what it moves to. 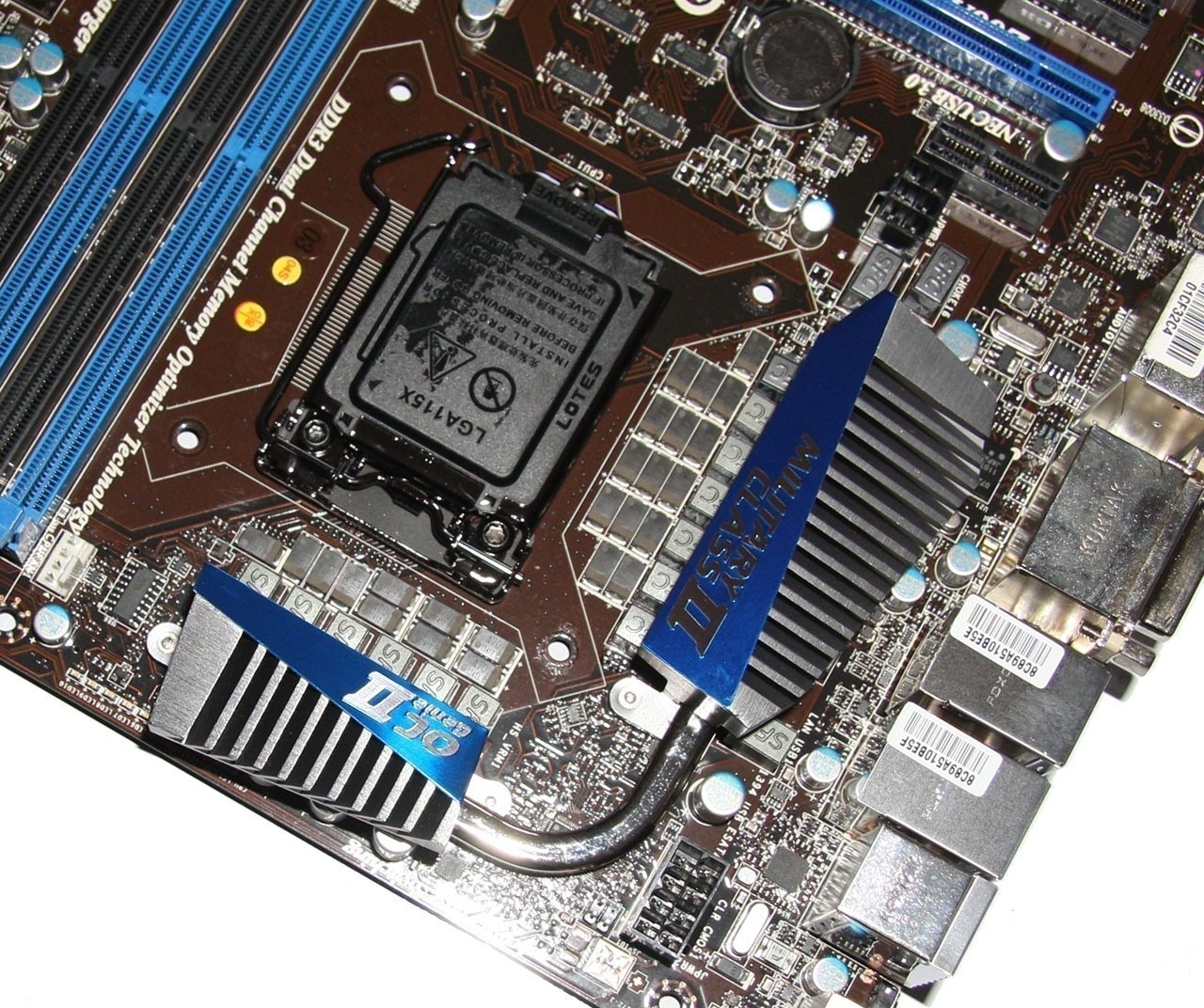 Moving around the CPU area, we've got a pretty clean setup. We can see our 8-Pin power connector to the right along with a fan header and another fan header to the left side. The main stand out here is the heatsink setup around the CPU which looks pretty strong with both heatsinks being connected with a heatpipe. On these we also see two of those main features that MSI is pushing; Military Class II and OC Genie II.

Finally, we get around to the I/O side of things and starting from the left we have a PS/2 combo port and Optical S/PDIF audio out which offers HD audio from the Realtek ALC892. Next to these we have a small Clear CMOS button and then from the top 1394 Firewire, two USB 2.0 and an e-SATA port. Next to this we have two sets of Gigabit networking ports from the Realtek RTL8111E chip and four USB ports. The black are again USB 2.0, but the blue ones are of course USB 3.0 controlled via the NEC D720200 chip.

Offering Intel HD Graphics means we've also got a DVI-I port and below that a HDMI one. Next to these video ports we have six analogue audio ports that run off the same Realtek ALC892 codec.

From the chipset side of things the MSI Z68A-GD80 features the same ones as we mentioned when we looked at our ASRock Z68 boards in our preview here. That's of course Intel Smart Response Technology, Intel HD Graphics and Fast Encoding via Lucid Virtu.

On top of those technologies that are key to the Z68, there are a few stand out features that MSI are promoting which are on offer. One is Military Class II which brings SFC (Super Ferrite Choke), Hi-c CAP (Highly-Conductive polymerized capacitor using tantalum core) and Solid CAP (Solid Capacitors). 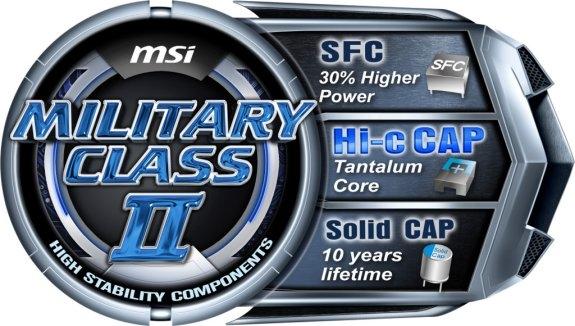 MSI say SFC brings 30% higher maximum current capacity and 10% higher power supply efficiency. Hi-c CAP and Solid CAP bring higher quality capacitors to the table which helps boost the overall lifetime of your motherboard and helps maintain cleaner power and lower temperatures. Combined, these bring better stability and a longer life span to the motherboard when compared to ones that use cheaper components.

We see a lot of good motherboard manufacturers opt for these kinds of features on higher end boards, but they all have their own name for it. It's a good feature to have and when buying a high end, good quality motherboard, it's important to look if it uses stuff like Solid Capacitors so you know the life span of it will be long. For MSI boards, if you've got the "Military Class II" logo, you know you're getting all these yummy features. For more information it's worth heading over to the MSI Military Class II mini site.

The other big feature that we see MSI promoting is OC Genie II. With a press of a button OC Genie II will help automatically overclock your CPU to a higher, yet still stable frequency without the need to use any software. 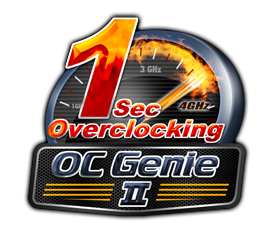 Not only does this boost 3D Performance thanks to an increase in clock speeds, but MSI say that combined with Intel Smart Response Technology, HDD performance can even be boosted which is quite interesting.

Unfortunately we can't give you any exact kind of numbers that we've discovered, firstly because we haven't tested yet, but secondly because we wouldn't be allowed to anyway just yet. We can give you some numbers that MSI has passed on to us which we'll indeed see on their site once the boards have been added. 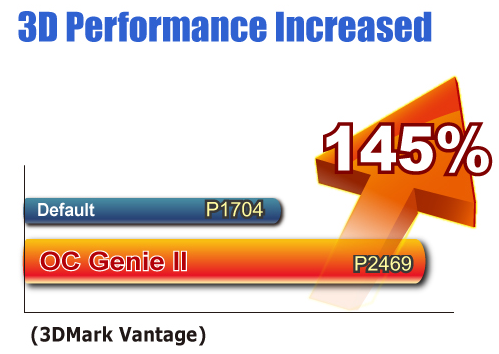 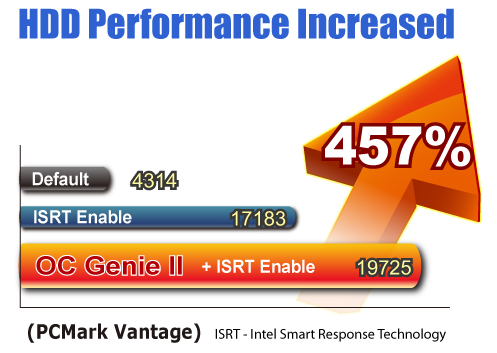 It will be interesting to see how our own testing of OC Genie II goes. This automatic overclocking is something we're seeing more of and it's a great way for people who have heard about the extra performance overclocking can bring, but know it's being done in a safe way that requires no real BIOS knowledge.

MSI has put together what looks to be a really well rounded and strong featured board. Doing a once over shows we've got a lot on offer in terms of connectivity and expansion and you can see we've also got some really cool extra features that help make the board stand out.

If you're already the user of a higher end P67 board from MSI like the Big Bang-Marshall or P67A-GD80, you will probably more than likely not see yourself updating to the Z68 platform, because from a feature stand point, we continue to get that feeling that Intel's new chipset isn't a leap and bound increase. Instead, depending on price, you'll more than likely choose this board over the P67A-GD80.

In the end, though, it's all going to come down to performance, and we can't talk about that for a few more days. Make sure you keep an eye out, though, as May 11th rolls around and we start to look at the performance of these Z68 boards we've previewed and received.

Just looking from the outside, though, MSI has come a long way in the motherboard department when compared to the last time I used an MSI motherboard, which was probably the late 90s when the Intel 440BX chipset and Celeron A ruled supreme.