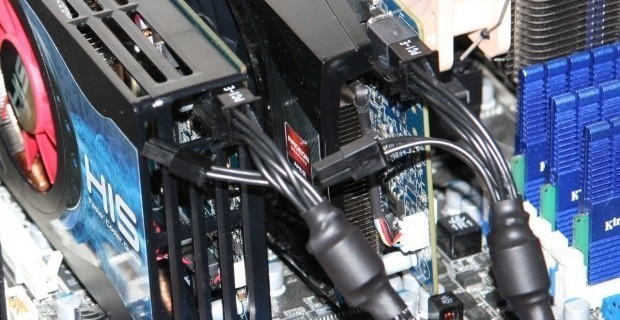 In our video card benchmarks we run a $1,000 980X at 4.2GHz and while we understand that it's not a CPU most people use, there's a logical reason behind it. When we benchmark cards we want to make sure that we don't hit a CPU limitation and limit the maximum performance of a possible setup.

So, to make sure that doesn't happen, we overclock our CPU as much as possible. Today, though, we're going to mix it up a bit. Instead of testing different video cards, we'll be looking at our 980X at a number of different speeds.

We've recently tested the HD 6850 in Crossfire and loved the performance it offers. What we love more, though, is the price. If you're paying out $400 for a video card setup the chances are you're not putting over double that on the CPU, which is something we completely understand.

So what we've done today is grabbed our 980X, disabled a couple of cores and started testing performance at a number of different speeds. Sure, more CPU is better; but how much better? - What kind of CPU should you be buying for a setup like the HD 6850 in Crossfire?

These are questions we're going to answer today. Let's have a closer look at our testbed and what exactly we've done before we get into the actual performance and see the CPU scaling effect on our video cards today. 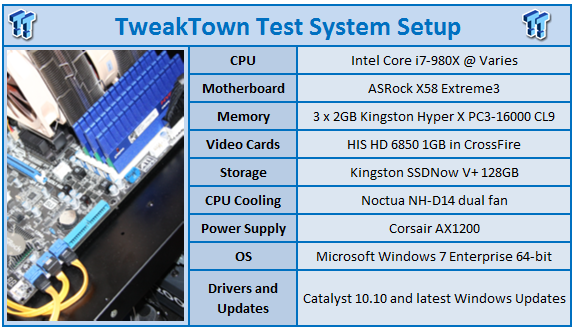 What we've done today is clock our 980X to different speeds while disabling cores at times to simulate low priced and lower clocked CPUs. For example, we leave the BCLK at 133MHz, disable two cores and drop the multiplier down to 23 to give us a clock speed of 3.06GHz. This will help us simulate the performance of an i7 950.

While it's not perfect, as we've got a bit more L3 Cache on our 980X, the speed is going to be one of the most important factors in helping us judge the scaling benefits of higher end CPUs.

Apart from the highest clock speed, the BCLK has been left at 133 and only the Multiplier has been adjusted from 23 - 29.

Due to the amount of testing that had to be done, we've cut our benchmarks down slightly, but we've included all the important stuff including all the resolutions that we normally test at. 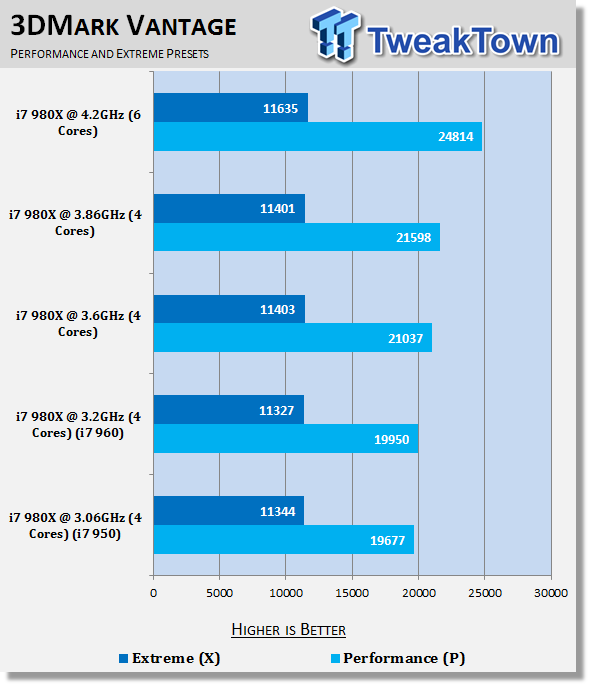 As we move the clocks up we see a little positive movement, but nothing major. The biggest gains are seen at 4.2GHz with all our cores enabled. 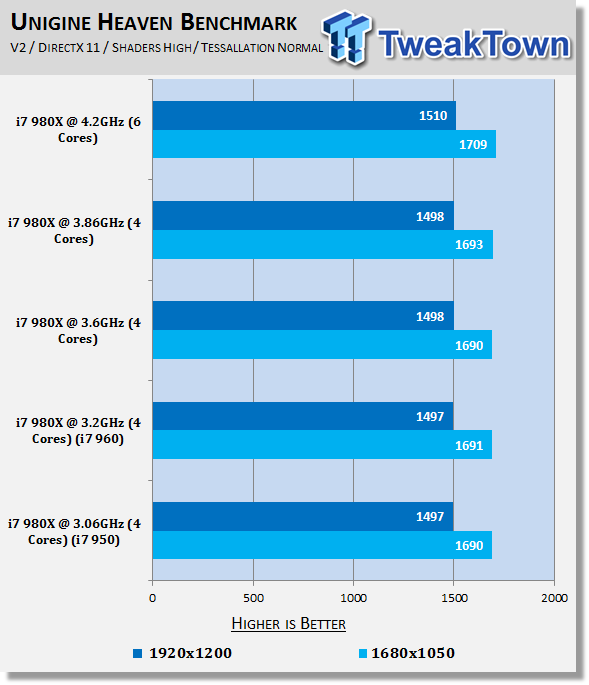 Across the board you can see that the extra MHz really does very little for more performance with nothing more than a bit of fluctuation being seen. 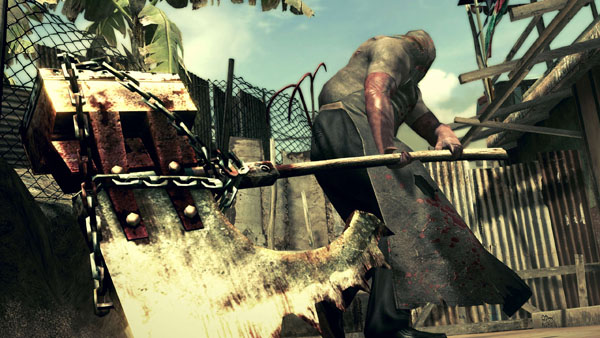 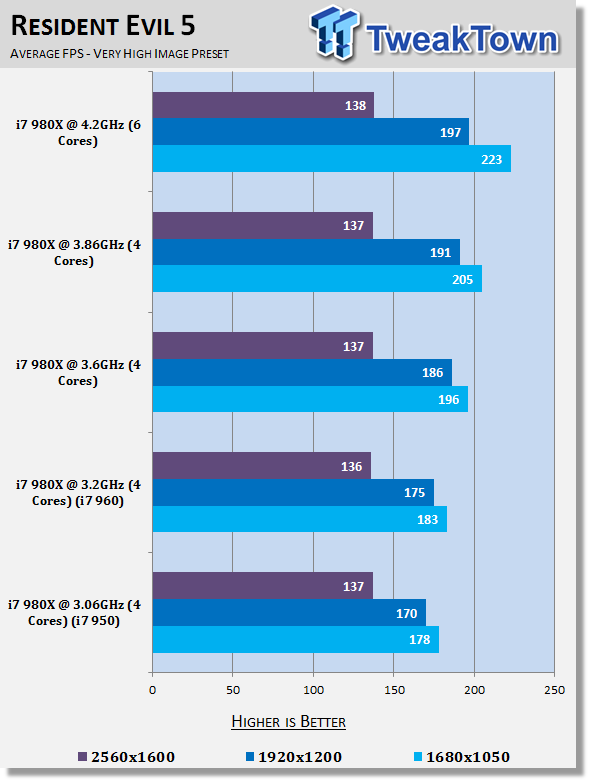 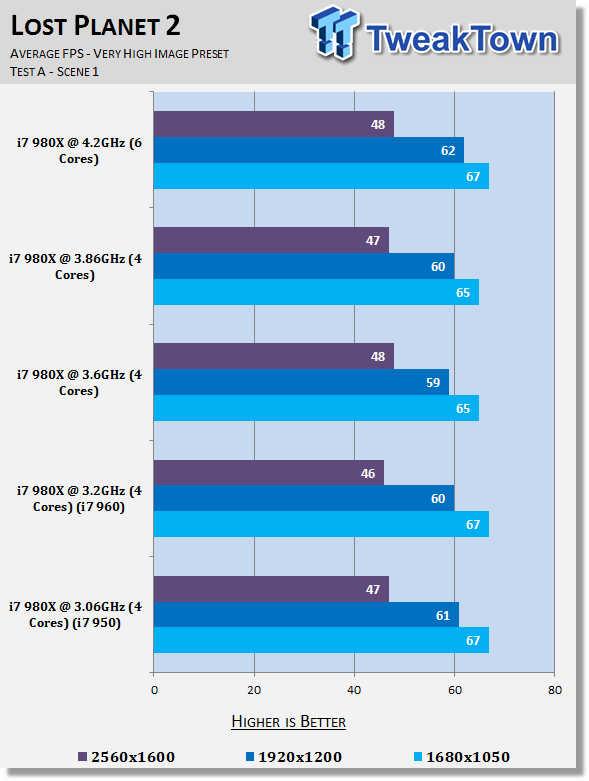 Lost Planet 2 across the board sees very similar performance from our VGA setup at all resolutions with nothing more than a bit of fluctuation being seen. 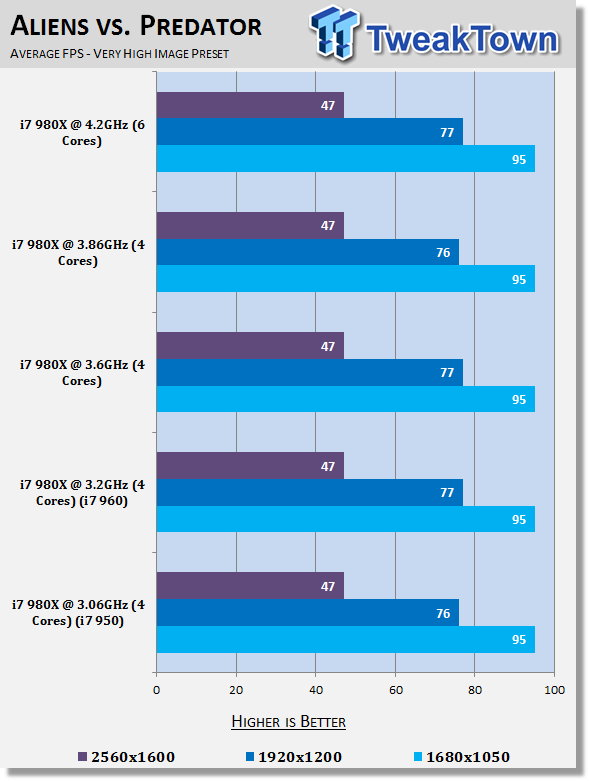 AvP sees the same with no change across the board and the numbers being almost identical at all resolutions. 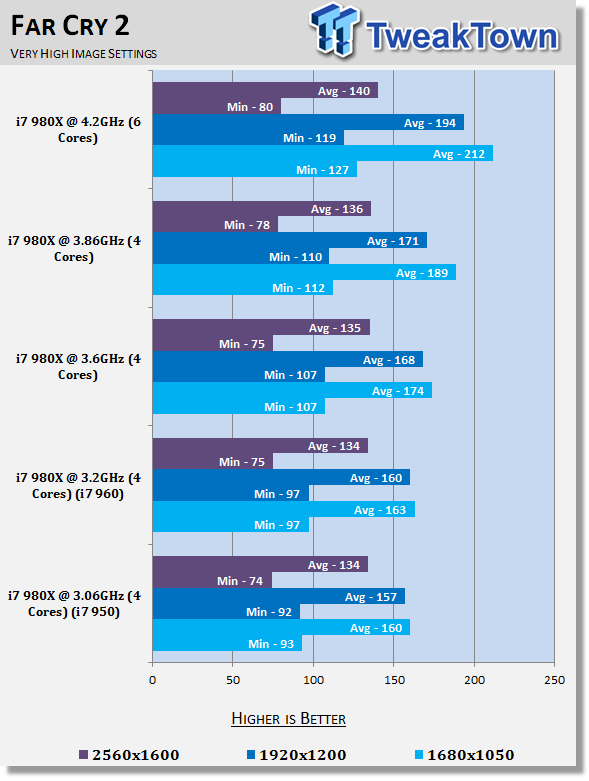 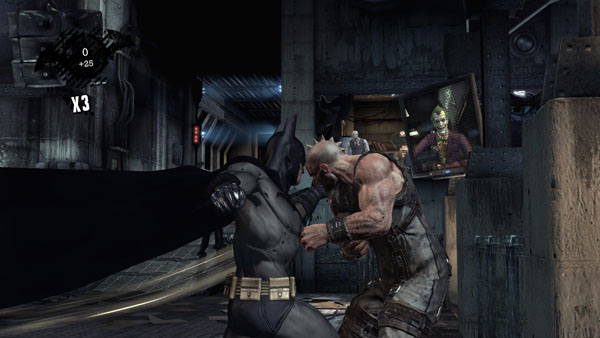 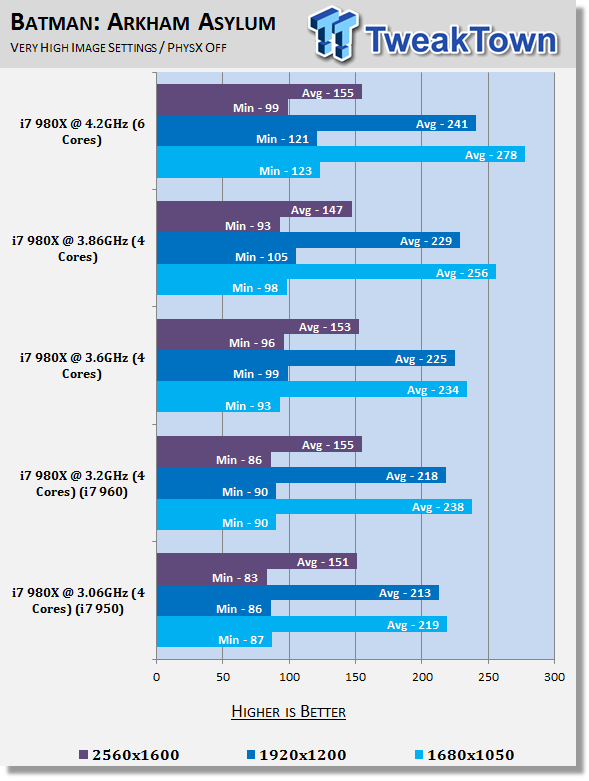 Here we again really see the CPU limitation that's present at all resolutions; especially when you look at the minimum numbers. 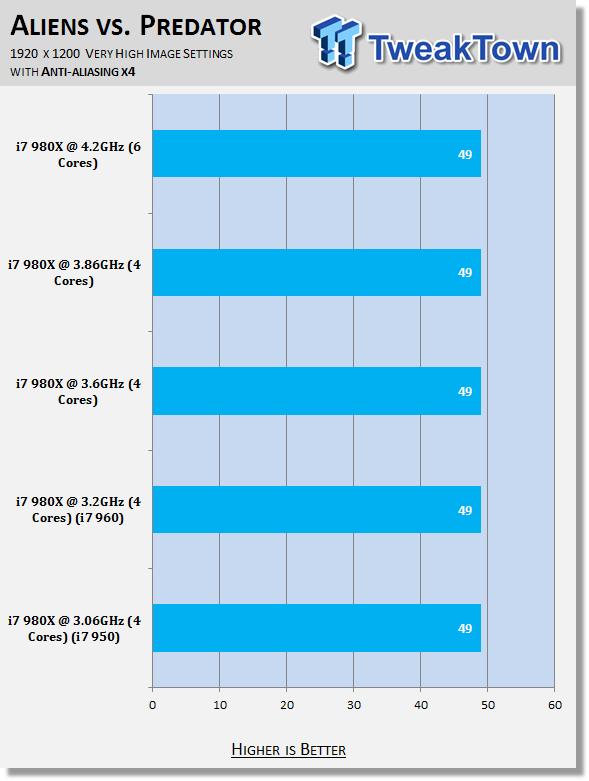 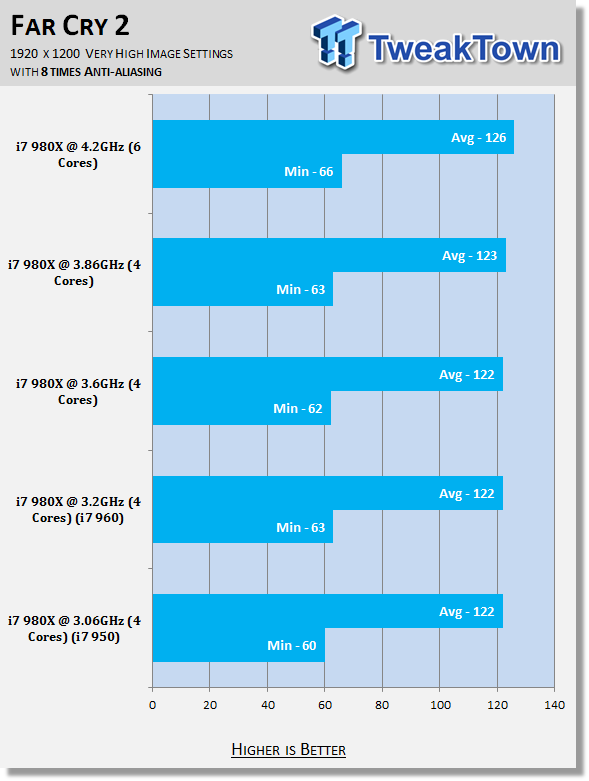 The CPU limitation issue is a very real one and can't be ignored. It's ignorant to think that even more budget friendly setups like the HD 6850 in Crossfire aren't going to be impacted by a CPU limitation, as at this price AMD really give us a huge amount of performance.

There's a few ways to combat a CPU limitation, though, and it's not by just increasing your CPU speed. The idea is that you want to put more load on the video cards and this can be done really in three ways. Up the in-game detail up higher than what it was at previously is one. If that's not an option, start to look at turning on AA and AF which really place a lot more pressure on your cards.

The final way is to increase the resolution you're gaming at, again, by placing more pressure on the video cards. You can clearly see with intensive games like Aliens vs. Predator the performance at 1920 x 1200 on our CPU at 3.06GHz is the same as it is at 4.2GHz while we're running more voltage through the CPU and possibly shortening the life. So what reason is there to overclock the CPU that high in this kind of a situation? There isn't one really.

Sure, that's a great gain, but that extra performance isn't going to make the game any better for you. Even in a situation where you're using a 120Hz monitor, you're at a number that's well and truly comfortable when at 3.06GHz.

I don't want to give the impression that buying a faster CPU is a waste of money, as we know that there's more to the purchase of a CPU than just gaming. But it's important to know that under situations where your video detail is high, the added speed of not just a few hundred MHz, but more than a GHz at time, can yield almost no performance increase when it comes to your actual FPS. Of course, as you climb up to higher end video card setups that come in at an excess of $1,000, then the more speed is going to be appreciated. That's something we may look at when the HD 6900 series begin to arrive.